ASU alumnus wants to change the world through student affairs

After falling in love with the campus on a tour his junior year of high school, Logan Rhind decided to pursue an undergraduate degree and minor at Arizona State University.

“From a very young age, my parents instilled in me the importance of education and hard work,” said Rhind, who graduated with the Class of 2015. “I was expected to get a college degree, but the university made it fun. ASU gave my life direction and the resources I needed to find a career that best fit my interests and passions.” 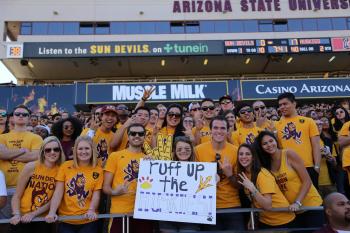 Alumnus Logan Rhind (front, third from right) participated in Camp Fargo and sat in the front row of the student section at the Sun Devil Stadium for two weeks. Download Full Image

“Political science and history are a very natural pair,” Rhind said. “However, the ability to see things from two different perspectives in the social sciences and the humanities has helped me a lot. I think the lessons a liberal arts and sciences degree teaches you are transferrable to any field.”

After graduation, Rhind served on assemblyman Marc Steinorth’s reelection campaign for the California State Legislature to represent the 40th Assembly District in 2016. While on the campaign trail, Rhind realized his passion for politics was not translating into career happiness and decided to make a switch.

“I missed the college environment,” Rhind said. “I love education. I love talking with students. I love networking with other like-minded individuals. So, I wanted to turn those passions into a career.”

Rhind worked in residential life at ASU for five of his seven semesters. He was a desk assistant, a community mentor and a desk manager. He said he really enjoyed being able to interact with students. While Rhind was trying to determine if higher education was his true path, he applied for a Master of Education in educational leadership at Northern Arizona University.

While working on his master’s degree, Rhind took a position as a graduate assistant for student unions at Northern Arizona University. He’s on track to graduate from the university this month.

In March 2017, Rhind accepted a position back at Arizona State University as the administrative assistant for development and marketing at Barrett, the Honors College. He plans events for alumni, networks with donors and assists with communications.

“Every opportunity I’ve been blessed with has come from my connections or experiences at ASU,” Rhind said. “Residential life wasn’t just a resume builder, it also taught me transferrable skills I use today like the ability to effectively get across what I’m trying to say and being able to genuinely connect with people.”

As for his future aspirations, Rhind wants to pursue either a Juris Doctor or Doctor of Education. He wants to assume a director-level position within student affairs and, eventually, become a dean. He’d also like to incorporate his love of politics and run for a local school board or city council.

“I’d love to be in higher education for 50-plus years because that’s where my passion lies,” Rhind said. “Student affairs is the basis of the future when you think about it. Students in higher education are going to be leaders in every field possible. They’re going to innovate. They’re going to change everything. Being able to say I helped them in any way is why I get up in the morning because it’s truly going to change the world.”

Based on Bechdel’s novel of the same name, ASU Gammage will kick off its 2017-2018 Broadway season with five-time Tony Award-winning musical, "Fun Home." 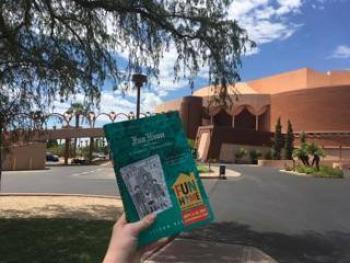 ASU Gammage hid copies of "Fun Home" around town as part of its second book club. The musical of the same name runs Sept. 5-10 at ASU Gammage. Download Full Image

In anticipation of the show, which runs Sept. 5–10 at the iconic Tempe venue, ASU Gammage has hidden several copies of the novel throughout Tempe and Phoenix.

“At ASU Gammage, our mission is connecting communities, and that’s the objective of the ASU Gammage Book Club,” said Erica Lin, digital marketing specialist for ASU Gammage. “It’s a fun way to get the community excited about reading and the performing arts.”

The organization initiated the book club by hiding copies of "The Curious Incident of the Dog in the Nighttime" in June, to align with that play's run at ASU Gammage as well.

Some are hidden in Little Free Libraries, miniature outdoor libraries created as part of a neighborhood book-exchange program. Others are hidden in coffee shops, parks and other unexpected locations.

Anyone is welcome to pick up a copy, read it, then pass it on to the next literature aficionado. Each teal book is marked with a red sticker explaining this process.

Individuals who find a copy of the novel can post photos and share their experience on social media with the hashtag #ASUGammageBookClub.

Both the “tragicomic” and stage performance tell the unique tale of Alison’s dysfunctional family through intimate, and emotional theatrical story-telling.

The musical allows audience members to peer through Alison’s own perspective as she reflects on her journey to self-acceptance and seeing her parents through grown-up eyes.

The musical "Fun Home" has been awarded numerous accolades for its cathartic storyline, including the 2015 Tony Award for Best Musical.

Tickets to "Fun Home" are on sale now at asugammage.com and the ASU Gammage Box Office.