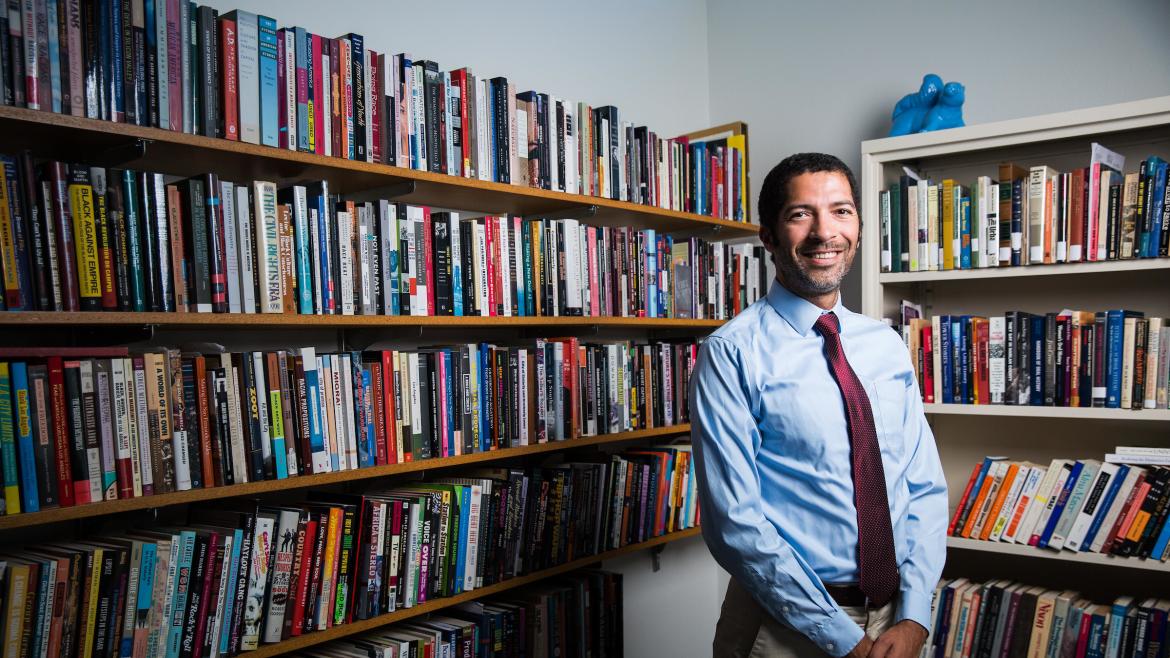 The threads of history are often found in the daily life of people, and Matthew Delmont has been exploring that theme.

The Arizona State University history professor wrapped up his yearlong digital project, “Black Quotidian: Everyday History in African-American Newspapers,” earlier this year, and that inspired his next project on the daily lives of black people during World War II.

“African-Americans rallied around something called the ‘double-victory campaign,’ which meant victory over fascism abroad and victory over racism at home,” DelmontHe also is the author of “Making Roots: A Nation Captivated,” “Why Busing Failed: Race, Media, and the National Backlash to School Desegregation” and “The Nicest Kids in Town: American Bandstand, Rock ‘n’ Roll, and the Struggle for Civil Rights in 1950s Philadelphia.” said.

“Black newspapers will be one of the main sources. They had war correspondents embedded in Europe and Asia, and they were dodging enemy fire to bring these stories to the communities in the U.S.”

Delmont’s project got a huge boost when he was awarded a prestigious Guggenheim Fellowship recently, which will allow him to step away from his position and devote a year to research and writing.

Question: How will you spend the fellowship year?

Answer: As the new director of the School of Historical, Philosophical and Religious Studies, I’ll defer the fellowship for a year, until 2018-2019, when we’ll have an interim director of the school.

I’ll spend the year looking up a lot of archival information, looking at black newspapers, documents, letters, reports, all things related to what was going on in the front or related to African-American troops deployed either in Europe or the Pacific Theater.

Q: How did African-Americans see the war?

A: When you look at this from an African-American perspective, the time period of the war changes. Usually when we talk about American involvement in World War II, we talk about 1941 to 1945 — 1941 being Pearl Harbor and 1945 being when Japan and Germany surrendered.

When you look at how African-Americans considered World War II, it actually started earlier. When Italy invaded Ethiopia in 1935, a lot of African-Americans considered that to be the start of war because it was a fascist nation invading the only independent nation in Africa. So even though the United States wasn’t involved yet, they saw their interests in play. They were using language about fighting against fascism by the mid-1930s.

A: For a lot of African-American veterans, when they came home they experienced similar levels of racism they had prior to the war. There was a great amount of hope that by proving their patriotism, by proving their service to the country in World War II, things would be different once they got home. In a lot of cases, that didn’t happen. You had lynchings of African-American veterans in the South and you had continued discrimination in housing, education and employment all throughout the country.

World War II became a rallying point for a lot of civil-rights activism after the war. So I think saying the war ended in 1945 doesn’t really accurately capture how black veterans and African-American communities more broadly tried to continue the organizing efforts.

They came home fighting for things in the home front that the nation had been fighting for internationally in terms of democracy and equality and freedom. They wanted to see those things be true not just in Europe but also in the United States for them.

Q: How did you become interested in this era?

A: My last digital project was “The Black Quotidian.” I saw some fascinating articles, a mix of local and global stories. In a single newspaper, you’d see a story about a set of brothers from Cleveland who were fighting in the war, and what neighborhood they were from and what their parents thought about it and in the same issue you’d see what was going on in Ethiopia, with a global perspective. I saw so many smaller references that I became interested in how the bigger picture fit together.

And also it’s the current political climate in the country. A lot of questions are being raised about civil rights and whether our nation will ever be equal in terms of race and opportunity. Looking back to World War II, what we usually think of as the golden era of our nation’s history, the “good war,” a lot of the issues regarding race relations look similar to what we see in the news today. There were race riots and racial confrontations in cities and on Army posts all across the country during the war, and I don’t think most people think about that when they think about World War II.

I think by looking back and seeing that these levels of racism and racial unrest have always been part of our nation’s history and something we have to reckon with and deal with honestly, I’m hoping that seeing World War II in that way can give us a usable history to better understand why we’re trying to deal with those same issues over six deades later.

Top photo: Matthew Delmont, a history professor and director of the School of Historical, Philosophical and Religious Studies in ASU's College of Liberal Arts and Sciences, won a prestigious Guggenheim Fellowship. He'll spend a year researching the perspectives of African Americans during World War II. Photo by Deanna Dent/ASU Now 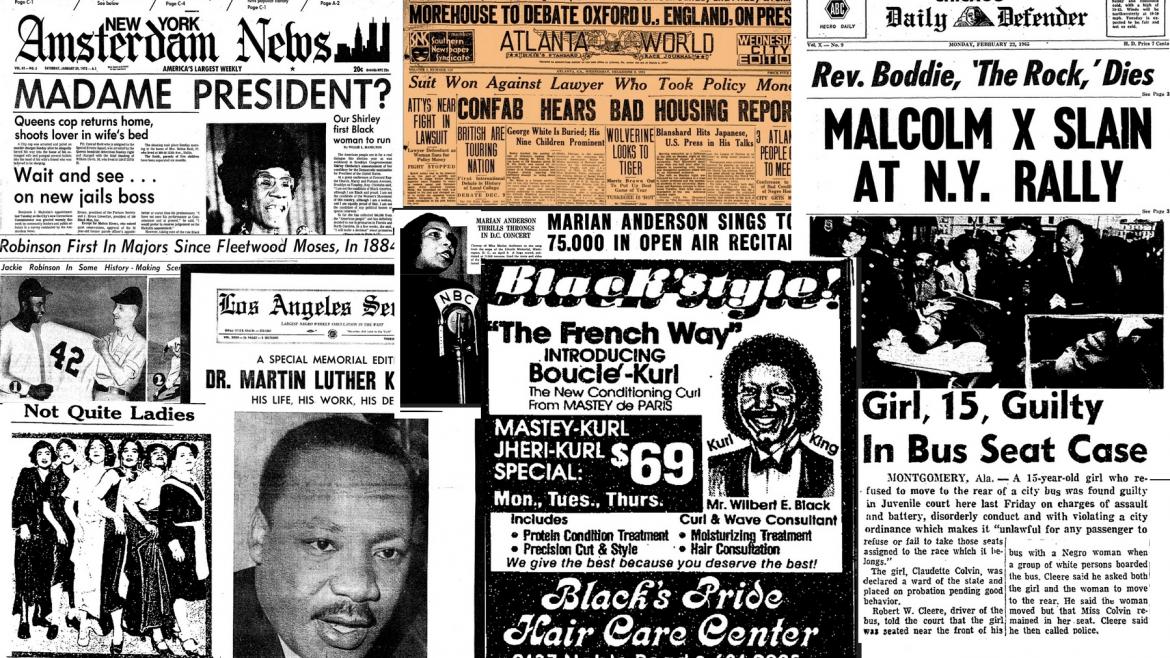 These lesser-known — and in some cases even ordinary — people are just as much a part of black history, and each played a role in shaping the narrative of black life in America.

“Absolutely you should know about Rosa Parks, absolutely you should know about Martin Luther King,” but the fact is that there are and were amazing black people and communities everywhere, Arizona State University history professor Matthew DelmontMatthew Delmont was recently named the director of ASU’s School of Historical, Philosophical and Religious Studies. said. Making an effort to learn more about what that looks like on an everyday basis, he added, “can help you re-envision what American history looks like.”

That was the impetus behind Delmont’s yearlong digital history project, Black Quotidian: Everyday History in African-American Newspapers. Each day for a year, beginning on Martin Luther King Day in 2016, he posted a historical article from a black newspaper on the project website, sometimes tweeting them out as well. The articles featured everyday stories of black people in America.

The idea was to treat black history as a yearly subject — as Delmont put it, “black history 365.” One of his goals with Black Quotidian was to address how relegating black history to a single month makes it difficult to change the mainstream narrative of black life in America.

ASU Foundation Professor of English Neal Lester agrees. In his American literature course, Lester teaches black writers, including Toni Morrison, Zora Neale Hurston and Richard Wright, as part of American canon, instead of separating them into their own category. To do that, Lester said, would suggest to him “that people don’t quite see this as a necessary part to be integrated into the fabric of the everyday. That somehow, it still needs to be teased out and separated.”

Before there was Black History Month, there was Negro History Week, established in 1926 at the behest of historian Carter G. Woodson. It was a “groundswell” movement, Delmont said, with black newspapers encouraging readers to write to Woodson for pamphlets on black history.

The reason behind Woodson’s and other historians’ and intellectuals’ push for the holiday was two-fold: First, at the time, there was almost total exclusion and distortion of black history being taught in schools — exclusion in that there was no mention of black people with any agency, like Harriet Tubman and Frederick Douglas, and distortion in that slavery was presented as having been beneficial for black people.

Second, Delmont (shown below) explained, “There was a sense that history brings power. That if you have a more fully-formed sense of pioneers of black history – in terms of sciences, in terms of agriculture, in terms of business — that that can empower young people, and can empower any community member to envision different possibilities for their own future.” Each day for a year, beginning on Martin Luther King Day in 2016, ASU history professor Matthew Delmont (pictured in May) posted a historical article from a black newspaper on the Black Quotidian project website — stories that featured everyday people in America in an effort to help change the mainstream narrative of black life. Photo by Charlie Leight/ASU Now

From there, it spread through communities and across the country as teachers, religious leaders and parents took it upon themselves to share black history with their students, congregations and children. Fifty years later, in 1976, it became a month-long celebration following the civil rights movement, and schools began incorporating it into their curriculum.

Today, Delmont said, “We’ve come a long way in terms of presenting black history more accurately in mainstream textbooks — almost everyone who’s been through the American high school system knows Martin Luther King and Rosa Parks — but beyond that, there’s not really a deeper sense of what African American history has been about.

“It isn’t just about civil rights; it isn’t just about wonderful leaders or horrible things happening. It was very ordinary.” That was another thing Delmont hoped to do with Black Quotidian: “I wanted to reclaim the ability of black people to be ordinary.”

One story he came across through the project was that of Juanita Blocker, the first professional African-American bowler. “She’s not someone who’s going to get attention in most Black History Month retrospectives,” Delmont said, but her story is still one of the many threads that make up the fabric of American history.

“Any textbook you take, you should be able to thread through some aspect of African-American history,” he added. “And you could say the same thing about women’s history, and Latino history, etc. There’s no one single version of American history. It’s a story of different threads that you’re trying to pull together.”

Some of those other threads include the stories of Welford Wilson, a young boy from Harlem who took home the championship at the New York City Junior High School’s Oratory competition in 1929; Chrystal Tulli, a teacher at Booker T. Washington High School in Memphis, Tennessee, who made the paper for directing a school play in 1932; and Francois Andre, who directed fashion shows and theater performances in L.A. during the 1950s.

“Exposing people to these histories can open up different perspectives,” Delmont said. A lack of exposure, however, can lead to the perpetuation of misunderstanding and stereotypes. “If you don’t have these sort of inter-personal relationships to understand people from different racial and ethnic backgrounds, it’s hard to get a sense of what life might look like, what America might look like through their eyes.”