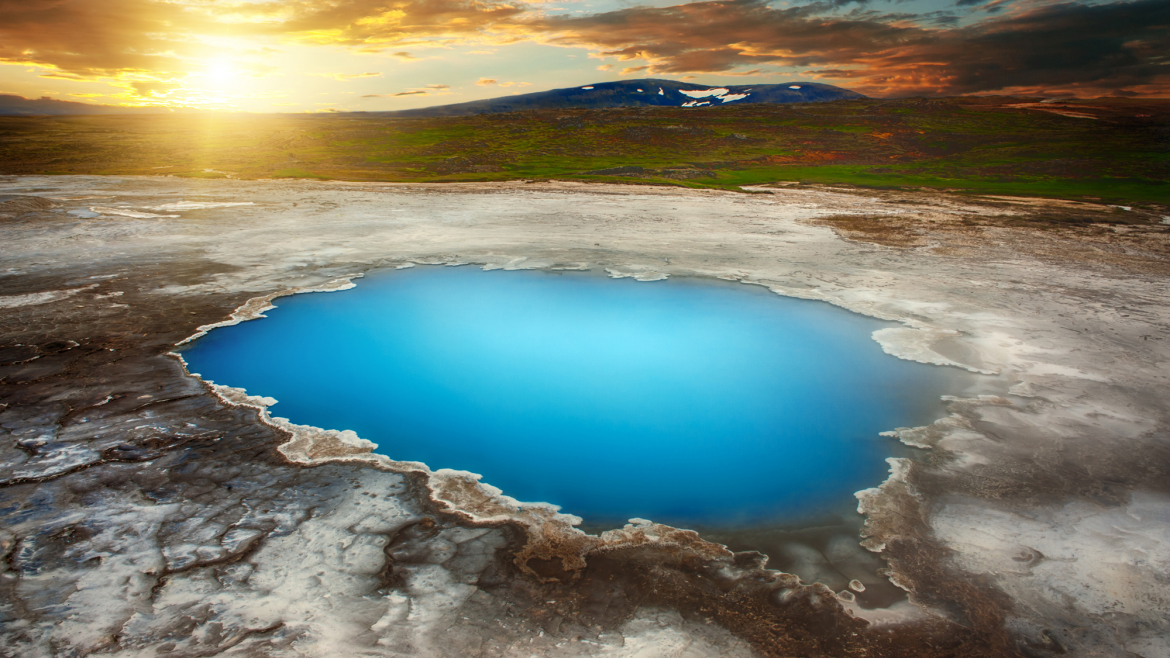 Every day, enough sunlight hits the Earth to power the planet many times over — if only we could more efficiently capture all the energy.

So scientists have looked at nature for inspiration to do it better.

By solving the heart of photosynthesis in a sun-loving, soil-dwelling bacterium, Raimund Fromme’s ASU research team has gained the most fundamental understanding of the inner workings of photosynthesis, and how this vital process differs between plants systems.

Their discovery may provide scientists with a brand-new template for laying the groundwork for organic-based solar panel design, known as “artificial leaves” for solar energy, or possible renewable biofuel applications.

The findings appear in today’s issue of Science.

With today’s solar panels limited by their efficiency (currently, more than 80 percent of available solar energy is lost as heat), scientists have been trying to better understand the way photosynthetic plants and bacteria capture sunlight.

“Nature’s invention of photosynthesis is the single most important energy conversion process driving the biosphere, and photosynthesis forever changed the Earth’s atmosphere,” said Raimund Fromme, an associate research professor at the ASU Biodesign Institute’s Center for Applied Structural Biology and in the School of Molecular Sciences.

More than 3 billion years ago, our planet had an atmosphere without oxygen. At this time, nature figured out a way to capture the sunlight and convert it to food to take advantage of this everlasting energy source.

Life’s solar panels, which scientists call photosystems, are used by plants, algae and photosynthetic bacteria as an incredibly efficient system for capturing almost every available photon of light to grow and thrive, filling every nook and cranny on Earth.

Lightning in a bottle

Fromme is part of a large structural biology research group at ASU, who are steadily gaining a better understanding by taking pictures of the key proteins that work within the photosynthesis reaction centers to help turn light into energy.

“To truly and fully understand photosynthesis, one has to follow the process of converting light into chemical energy,” said Fromme. “This is one of the fastest chemical reactions ever studied, which is part of what makes it so hard to study and understand.”

But the ASU structural biologists are using ever more powerful X-ray technology to one day catch up to the light by capturing freeze-frame images of crystallized proteins throughout the whole process.

In an effort to study photosynthesis, Fromme explored photosynthesis in its simplest form, in heliobacteria, which were first found in muddy soils near hot springs in far-flung locales like Iceland.

The single-celled heliobacteria are simpler, yet fundamentally different than plants. For instance, during photosynthesis, instead of using water like plants, heliobacteria use hydrogen sulfide. They grow without oxygen, and after photosynthesis, give off a rotten-egg-smelling sulfur gas in place of oxygen.

Heliobacteria have used their unique place to successfully carve out their own ecological niche because they use a near-infrared wavelength of light for photosynthesis, which is perfect for low-light conditions found in places like Iceland or murky, muddy rice paddies. Plants simply can’t compete.

Scientists have wanted to understand how heliobacteria accomplish this.

At the heart of photosynthesis is a reaction center (RC); it’s an elaborate complex of pigments and proteins that turn light into electrons to power the cell.

The heliobacteria RC has been proposed to be the closest thing alive to the earliest common ancestor of all photosynthetic reaction centers, when, around 3 billion years ago, the early Earth contained sulfur rich seas and little oxygen.

But successfully purifying an RC protein and growing crystals needed for X-ray experiments can be a lengthy, difficult process.

In particular, Fromme’s research project was started seven years ago as postdoctoral researcher Iosifina Sarrou first improved the preparation of the heliobacterial reaction center. After many initial trials of crystallization, an X-ray diffracting crystal charge was found.

“This is the moment a crystallographer is waiting for,” said Fromme, explaining the years it can take to grow the perfect protein crystal suitable for X-ray studies. It can take years to grow the perfect protein crystal suitable for X-ray studies.  On the left are emerald-colored protein crystals. The figure on the right is the diffraction pattern after the crystals were exposed to X-rays. Scientists can build the 3-D structure of a protein from these patterns. 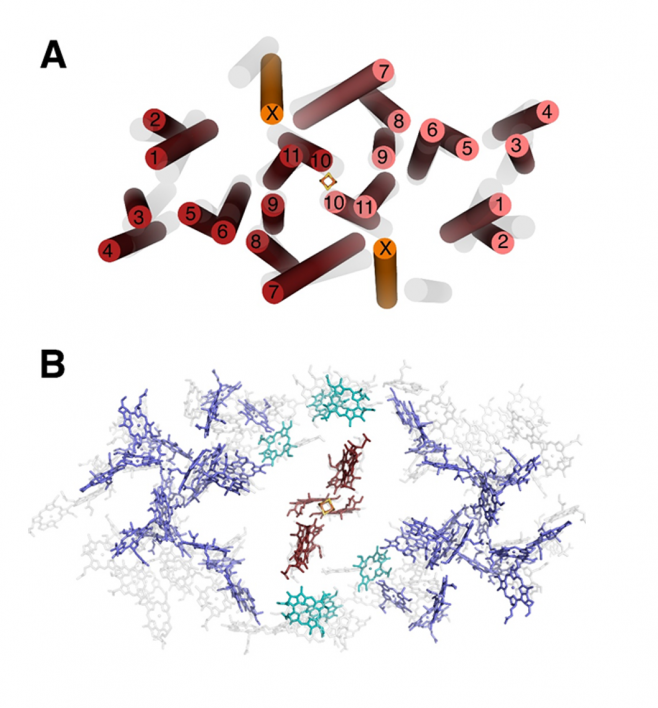 They found an almost perfect symmetry in the heliobacter reaction center (shown by the mirror-image pattern of the main protein motifs, indicated by cylinders (top image) and a close-up of the exact placement of individual atoms within the reaction center (bottom).

Short after these encouraging results, Christopher Gisriel joined the team and improved the diffraction quality of 2.2 angstroms to see the atomic details (a hydrogen atom is a single angstrom).

Still, the research team could not solve a crystallographic structure.

This hiatus took two years, until August 2016.  Then, finally, a breakthrough came.

At this point “a thrilling discovery on unchartered territory began, as each new chlorophyll was cheered,” Fromme remembered, and “proved everyone’s initial prediction on the heliobacteria’s RC was wrong.”

Using X-ray light at the Advanced Light Source in Berkeley, California, and a beamline at Advanced Photon Source at Argonne National Lab, Illinois, Fromme’s group has now visualized the heliobacteria RCs for the very first time at near-atomic, 2.2-angstrom resolution (an angstrom is the width of a hydrogen atom).

They found an almost perfect symmetry in the heliobacter RC, which helps it gather every available photon of near infrared light.

The ancient origins of photosynthesis

Furthermore, with the explosion of DNA-sequencing technology, and with the potential ability to understand all of the genes and proteins across life, they also traced the evolution of the photosynthesis RCs.

They wanted to know: Could this simplest of reaction centers have spawned all others, leading to greater complexity over the eons?

In evolutionary terms, this means that the heliobacteria RC may have first come from a single gene.

“This structure preserves characteristics of the ancestral reaction center, providing insights into the evolution of photosynthesis,” explained Fromme’s colleague Kevin Redding, a researcher at ASU’s Center for Bioenergy and Photosynthesis. “From the new structures we have, it would certainly make sense for a compelling case.”

Then, the gene may have been duplicated to increase the evolutionary complexity.

“This likely occurred on at least three separate occasions, leading to the creation of all the different and more complex reactions center found in other photosynthetic bacteria and plants,” said Fromme.

The sun will rise again

Fromme’s group is excited about the potential of the new results. Such an understanding could one-day help research groups around the world build an artificial photosynthesis center.

ASU has long been a research leader in photosynthesis, going back to the 1970s. It was a natural fit for scientists drawn to the unique beauty of the Sonoran Desert that, with its 300-plus days of annual sunshine, is simply the best spot in the nation to capture solar energy.

After all, the sun will rise again tomorrow, awaiting more and more clever technologies scientists can dream up to capture the full potential of solar.

The team included Christopher Gisriel and Kevin E. Redding of ASU; Iosifina Sarrou of the Center for Free- Electron Laser Science, DESY; Bryan Ferlez and John H. Golbeck of Pennsylvania State University. This work was funded by the Division of Chemical Sciences, Geosciences, and Biosciences, Office of Basic Energy Sciences, of the U.S. Department of Energy through Grant (DE- SC0010575 to KR, RF, and JHG) and supported by X-ray crystallographic equipment and  infrastructure provided by Petra Fromme of the Biodesign Center for Applied Structural  Discovery at ASU.

Arizona State University student Alicia Ellis’s trip to Ghana this summer was two-pronged.First, a co-director was needed to assist in leading an undergraduate study abroad program — one of more than 250 in more than 65 countries organized by the ASU Study Abroad Office. Students can participate in programs as short as a week, as long as a year and everything in between for academic credit....

First, a co-director was needed to assist in leading an undergraduate study abroad program — one of more than 250 in more than 65 countries organized by the ASU Study Abroad Office. Students can participate in programs as short as a week, as long as a year and everything in between for academic credit. 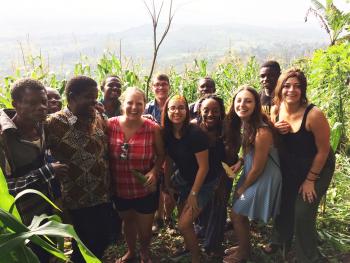 Alicia Ellis's trip to Ghana provided the political science grad student an opportunity to meet sources and build a network as she began to look into case studies for her dissertation. Download Full Image

Second, traveling to Ghana provided the political science graduate student an opportunity to meet sources and build a network as she began to look into case studies for her dissertation on the relationship between the political economy of agriculture and democratic accountability.

When discussing a typical day on the trip in Ghana, Ellis highlighted the fact that every day the group was best served by “planning for the unexpected.”

The group would go on academic visits so that they could see in person the topics they were studying in their Politics, Culture and Society course that they took while in Ghana.

An example of this was when the group toured the W.E.B. DuBois Museum and Cultural Center. In the classroom the students learned about W. E. B. DuBois, a Pan-Africanist and pre-eminent scholar of race and power in the 20th century and one of the founders of the National Association for the Advancement of Colored Peoples (NAACP). The museum, which is now a mecca for the world-wide African Diaspora, showcased his grave and the house where DuBois lived and studied.

Students can read and study these topics in the U.S. but actually experiencing them first hand is “mind blowing,” according to the program director and political science professor, Okechukwu Iheduru.

While it was difficult to choose just one stand-out experience of the trip, Ellis made a point to describe the personal connections she and the group made while in Accra, Ghana’s capital city, and Kumasi. A connection in Accra, her Uber driver for a trip around town, pointed her in the direction of a woman in Kumasi who ran a cocoa farm and a preschool. She described eating a palm soup with dough and fish, being told to use her hands. She also joked about being teased by the woman as she struggled to eat the soup, fondly describing the atmosphere within the small farm.

While visiting the city of Kumasi, the group was fortunate enough to attend the Akwasedie ceremony at the Asantehene’s (king’s) palace. This event marks the end of the Ashanti 42-day calendar month and features every sub chief and leader who must attend to pay homage to the king. While typically visitors sit in stands to view the ceremony, the study abroad group were treated as special guests. Each student had the pleasure of personally bowing to the king who was dressed in all gold traditional regalia.

Ellis said that this trip reaffirmed something she had learned from serving abroad in the past: humanity is the same despite geographic location. When arriving in a foreign nation with a starkly contrasting culture, it is easy to focus on the differences. But the fact is that humanity is continuous despite borders and distance — people have love, families, aspirations, and desires everywhere.

Now that she is back, Ellis is planning her next steps in completing her dissertation. Next summer she hopes to return to her newly-established network in Ghana, following up on a case study for her research.