'Pride and Prejudice' and roller derby: Q&A with Devoney Looser

When she died in July 1817, Jane Austen was not a household name. But in the 200 years since her death, she has become one of the world’s most celebrated novelists. ASU Professor and Jane Austen scholar Devoney Looser traces the author’s posthumous rise to fame in her new book, “The Making of Jane Austen,” which was named a Best Summer Book (Nonfiction) for 2017 by Publishers Weekly. 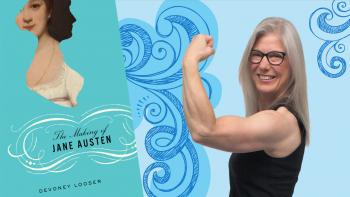 Looser, who has also played roller derby as Stone Cold Jane Austen, recently talked with Knowledge Enterprise Development writer Kelsey Wharton about how a Jane Austen debate led to her marriage, what Jane Austen might think of roller derby and why Looser would pass on having tea with the late author.

Question: Tell me about the first time you read Jane Austen.

Answer: The first time I became aware of Jane Austen was when my mother handed me a book. It was a copy of “Pride and Prejudice” and “Sense and Sensibility” together in one big volume. And it had been on the shelves in our living room. I'd never noticed it before, but she brought it to me and said, “I think you should read this.”

I think I tried to start it two times, and I just got really stuck in the language. I was probably 13 or around that age. The third time, something clicked. It was fun and delightful, and I loved it.

It was only years later that I learned that my mom had never read Jane Austen’s novels. We’d just owned a copy of that book, and she knew it was literature that educated people should read. And obviously, it set me on the path for a life that I'm really happy to have. So I'm incredibly grateful to her for doing that.

Q: Jane Austen has been popular among such diverse audiences — from suffragettes to the alt-right. Why do you think that is?

A: Well, she’s hard to pin down, and reading her isn’t a cake walk. I would say my students often come to her texts with exactly the same feelings that I did as a teen. That is, they are either prepared to be pleased or skeptical but struggling a little bit with the language.

Once they get past the struggle, they say she's “relatable.” I think that’s because she's able to speak on so many layers and levels. You can re-read her and see new things every time. That is what's amazing about her fiction. You can go in with a lot of different agendas or interests and find something there to appreciate.

Of course I have opinions about what I think are better and worse ways to interpret her fiction. But the fact that we have these debates swirling around her for so long is evidence of how complex and enduring the questions she raises are.

(Looser comments on this topic in a recent New York Times article.)

Q: How do you think of Jane Austen now that you've spent so much time studying her and her work? Is she an active mentor or more just a historical figure to understand?

A: The answer to that is probably both. She's now so deeply woven into the fabric of my life that it does feel like somehow she's a cosmic traveling partner. But I don’t believe I’m unique that way. I think she also serves that purpose for a lot of people. The way my experience is unusual is that I make a living doing Jane Austen. Not too many people make a career out of her, not to mention a marriage and a hobby!

Q: How is your marriage related to Jane Austen?

A: I met my husband [ASU English Professor George Justice], who is also a Jane Austen scholar, over a conversation on Jane Austen. We date the moment of our first knowing each other back to an argument over her.

George asked me which of her novels was my favorite, and he didn’t like my answer. He told me his favorite was “Mansfield Park” because he loved the heroine Fanny Price. I told him, “That is my least favorite novel because I do not like Fanny Price. I find her to be too much like me. She's boring.”

He says that's the moment at which he knew he wanted to marry me. I always say that he decided right then that he wanted a boring wife. That’s something that we continue to tease each other about, more than 20 years later.

Q: Has your opinion of Fanny Price changed over the years?

A: You know, it has, it actually has. I now see her as a lot less boring! She's still not my favorite heroine. I still much prefer the spirited, independent heroines, more in the Elizabeth Bennet mold. I was a very shy person in my teens and 20s, and Fanny Price spoke to that part of me, and maybe it’s not a part that I still identify with in the same way. I think as I identify less as a timid person, I can appreciate Fanny Price more for the quiet strength that she does have.

Q: For your forthcoming book, “The Making of Jane Austen,” how did you get the idea to explore the years after Jane Austen's death?

A: There's an area of exploration that scholars call reception studies. It means looking at how an author was received over time, by critics, readers and audiences. It looks at how their writings are interpreted and used. That's an approach I’ve taken for a number of female authors I've studied over the years in my previous books.

It always seemed to me, “Well, Jane Austen must have been done to death. We must know everything there is to know.” But then I was interviewed for this book that Deborah Yaffe wrote, “Among the Janeites.” She included me and my husband as some of the “quirky weirdos” profiled in her book. And so I thought, “There are all these quirky Jane Austen-loving weirdos now. I bet there were more in the past than we think there are.”

And the more I dug in the more I found. I think I found some pretty fun, new things about how Austen’s popular reputation was made, especially in book illustration, stage plays, early film, politics and schools.

Q: If you could sit down to tea with Jane Austen, what would you want to ask her?

A: Austen has this line in a letter to her sister where she talks about the advantages of getting older. She writes, “I am put on the Sofa near the Fire & can drink as much wine as I like.” I like that picture of her better than the tea-drinking picture!

But regardless of where I'm sitting with her, I think one of the things I would ask a ghost of Jane Austen would be, “What do you think of all the fuss that's been made of you and all the dust that's been kicked up about your writing and the arguments and the debates?” It's hard to imagine any author wouldn’t be somewhat pleased with their works living on in this way.

But it might end a lot of the debates to hear exactly what she thought. The fiction, I think, purposely doesn’t tell us what she thought, because pinning everything down makes it a lot less interesting. So, I'm actually glad that she can't tell us what she thinks because I'd rather have the debates and the arguments than have any kind of a settled line from her. The questions she raises for readers about how to live good lives, how to cope and maneuver in a world that can be deeply unfair, these may be far more valuable things than pat answers.

This is an excerpt. Visit research.asu.edu to read the full interview, watch a video of Looser skating roller derby and see additional photos.

ASU a 'best buy,' according to 2018 Fiske Guide to Colleges

Students seeking a quality education at a reasonable price can look to Arizona State University as a "best buy," according to Fiske Guide to Colleges 2018.The guide, which annually ranks schools with the best combination of academic excellence and value for the cost of tuition, included ASU on its list of only 20 public universities designated this year. ASU shared the distinction with the Univer... 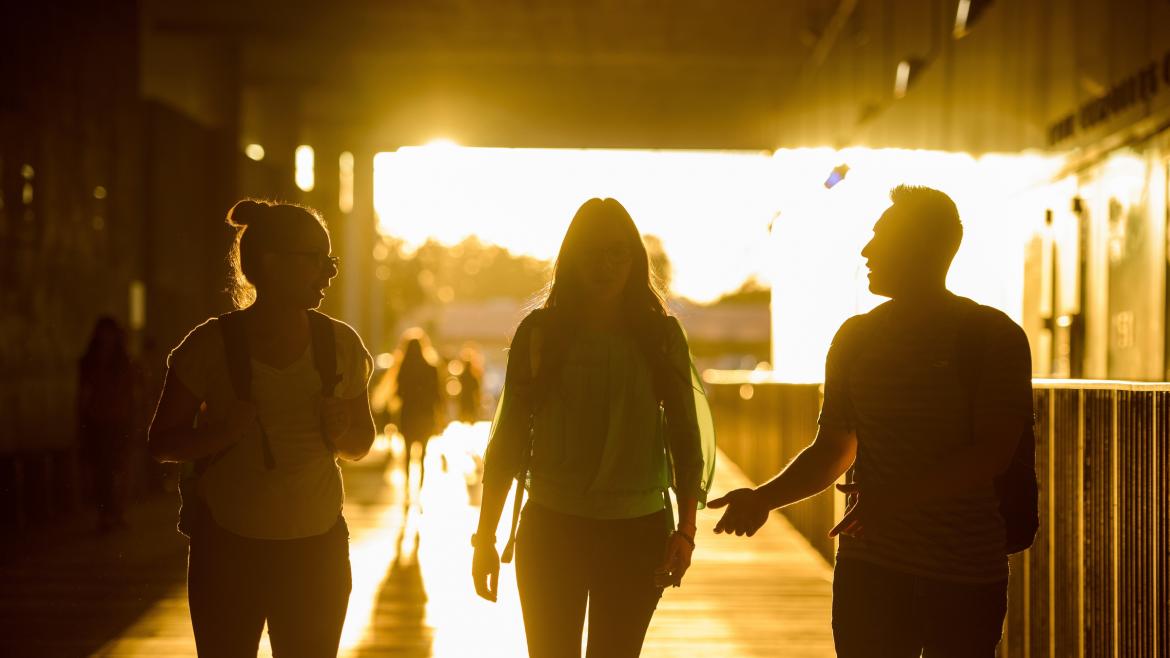 ASU a 'best buy,' according to 2018 Fiske Guide to Colleges

Students seeking a quality education at a reasonable price can look to Arizona State University as a "best buy," according to Fiske Guide to Colleges 2018.

The guide, which annually ranks schools with the best combination of academic excellence and value for the cost of tuition, included ASU on its list of only 20 public universities designated this year.

The Fiske guide describes ASU as a university “where ‘massive innovation’ is the norm and where an interdisciplinary culture is seen as the best means of developing ‘world-changing ideas.’ ASU’s stated goal is to serve any Arizona student qualified for college-level work and, in the process, it has become a national model of how to deal with the emerging demographics of U.S. higher education.”

Fiske reports ASU’s tuition for in-state students at around $11,000. In fact, very few resident students pay that amount: with gift aid and scholarships, the average Arizonan pays $1,800 in net tuition per school year.

ASU’s commitment to access and affordability has created an influx of students from a diverse socioeconomic range, expanding ASU’s reach beyond many similar schools.

And it’s not just Arizona students benefiting from the high-value proposition presented by ASU.

Students from all states have access to the world-class education of the No. 1 most innovative university in the country, according to U.S. News and World Report, for a reasonable cost.

“The scholarship I got from ASU made my out-of-state tuition about equivalent to what it would have cost in California to go to school,” said Lauren Gooch, a senior studying marketing. “Also, being able to graduate in four years was important to me — ASU guaranteed that, while the California schools I was considering could not.”

The Fiske guide is not the only ranking in which ASU excels. In addition to the No. 1 in innovation ranking — ahead of No. 2 Stanford and No. 3 MIT — the university ranks in the top 10 for graduate employability ahead of MIT, Columbia and UCLA, according to Times Higher Education.

ASU is the No. 1 public university in the U.S. as chosen by international students according to the Institute of International Education.

And it’s home to a top 25 law school, a top 25 graduate business school and a top 20 fine arts school in the country, according to U.S. News and World Report.

And like the Fiske “best buy,” it has been designated a “Best College Value” by Kiplinger’s.