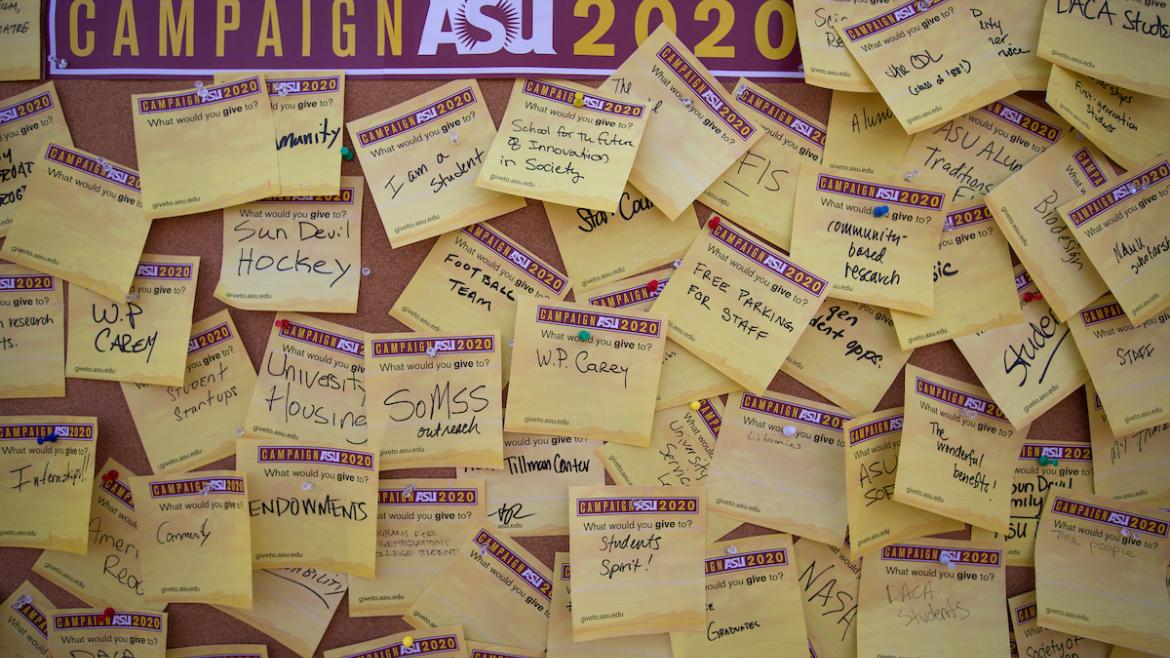 In the months following the launch of Campaign ASU 2020, a comprehensive resource-raising effort to sustain and grow Arizona State University’s educational activities, the ASU Foundation has announced the completion of a record year in fundraising for academic programs, research and services at the university.

At the close of the 2017 fiscal year, early estimates show private donors from across Arizona and the world contributed more than $220 million for ASU to enable access and excellence within higher education. The previous record of $215 million was set in fiscal year 2016.

“We’re trying to build something that the university needs going forward, which is a culture of philanthropy,” said ASU President Michael M. Crow. “All great universities in the United States are built around philanthropy.”

“This strong momentum indicates that our model is working and that our community is growing in its understanding of the value of private support to the university — and of the value of the university in society,” said R.F. “Rick” Shangraw Jr., chief executive officer of ASU Enterprise Partners, the parent organization to the ASU Foundation.

Campaign ASU 2020 focuses on six priorities — student access and excellence, student success, the academic enterprise, discovery, creativity and innovation, our communities and Sun Devil competitiveness — but donors are able to choose from 5,000 specific areas to make an impact. Those areas range from support for faculty developing space instruments for NASA to travel grants for undergraduates at Barrett, The Honors College to bringing Broadway shows to campus at ASU Gammage.

“I believe ASU is a major life force in our community, and I want to do my part to help it thrive,” said Jeremy Meek, Class of ’09, a donor and President’s Club Young Leader. He is one of more than 100,000 individual, corporate and foundation supporters to give to ASU this year.

Though private support is not a replacement for public funding, it provides the margin of excellence that allows scholars’ experiences to transform from good to great.

Around 8,000 students each year receive scholarships — perhaps the best-known category of support — provided by private donors.

Other beneficiaries include the reinvented Sun Devil Stadium; mid-career professionals hoping to transition to teaching; and the student-run, free health-care clinic for the homeless in downtown Phoenix.

One gift made international headlines when it was announced that Charlie and Lois O’Brien, two of the world’s foremost entomologists, would donate their collection of insect specimens and an endowed professorship to maintain them. The gift is valued at $12 million. 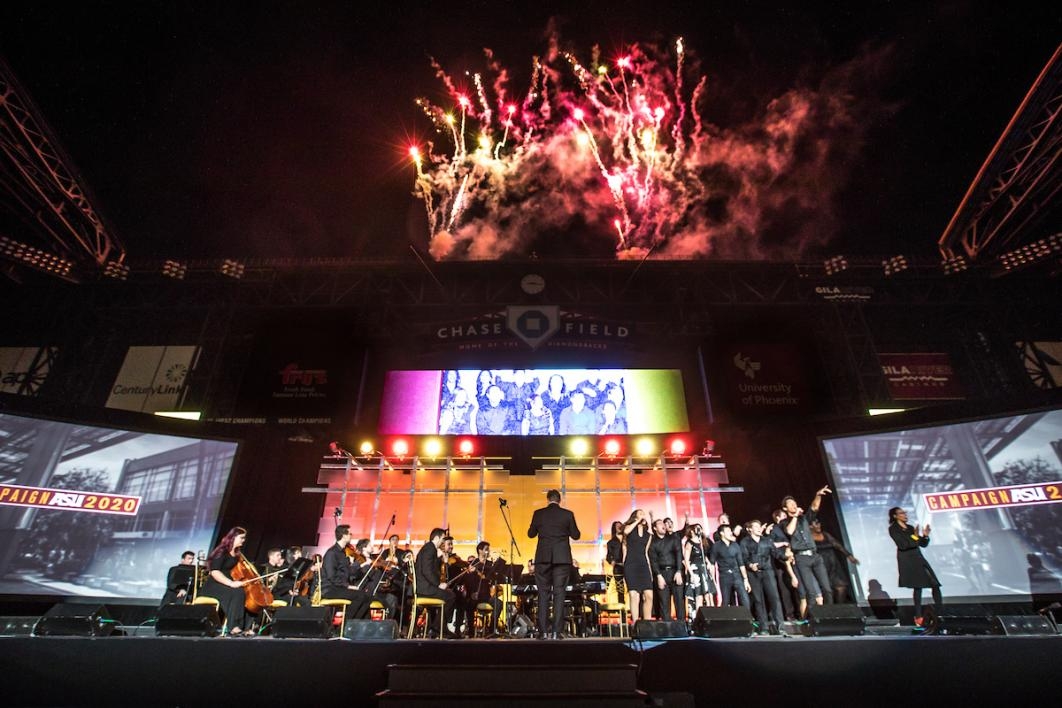 In January 2017, ASU announced Campaign ASU 2020, a comprehensive effort to raise at least $1.5 billion and the first during President Michael M. Crow’s tenure. 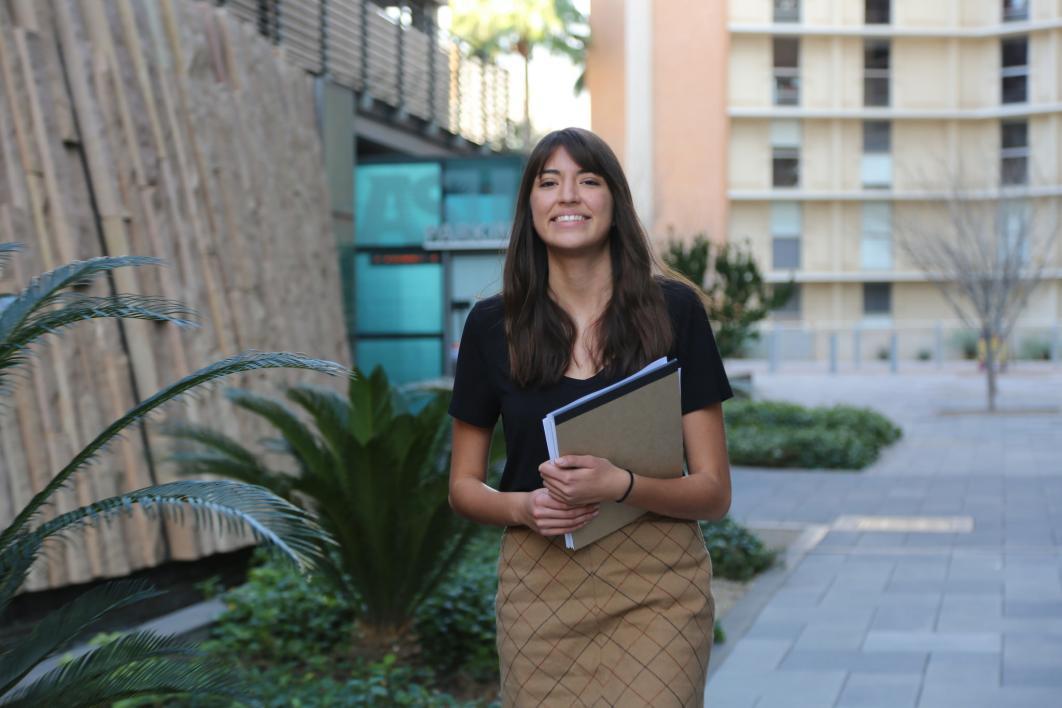 Private support allowed Lindsay Zapata, a nonprofit leadership and management major, the opportunity to study abroad in Nepal. She urged fellow students to find and support their passions, saying, “I am a philanthropist and so are you.” 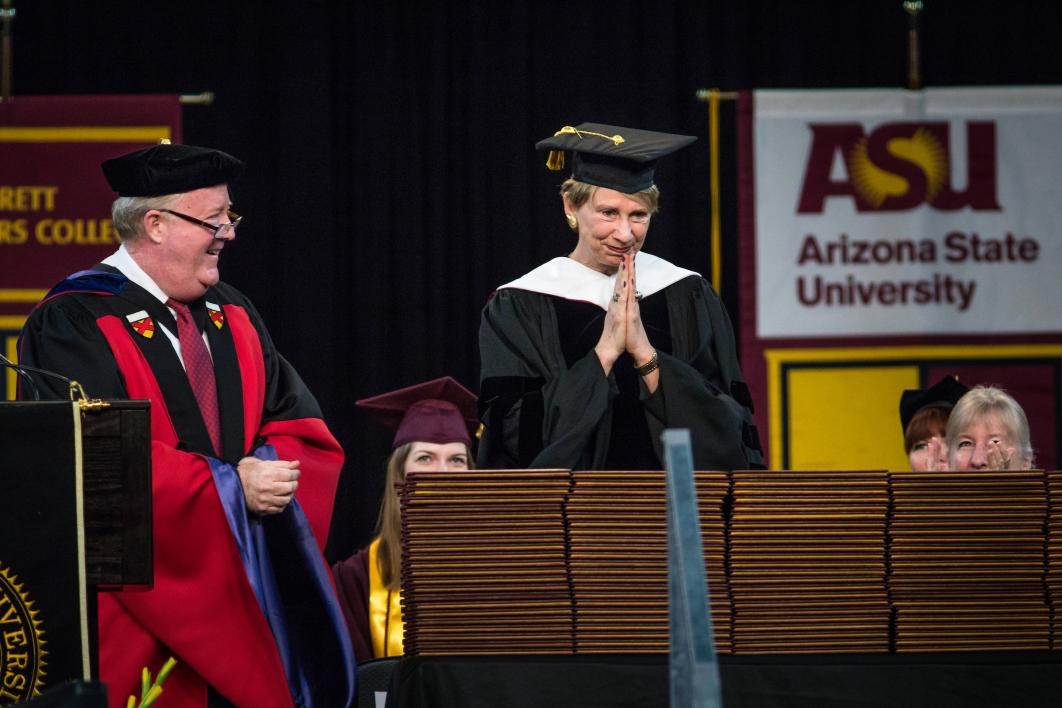 Vice Provost and Dean Mark Jacobs of Barrett, The Honors College, announced during its convocation that namesakes Barbara and Craig Barrett renewed their commitment to the college with a $2 million gift to support global citizenship programs. Earlier in the year, ASU’s Sandra Day O’Connor College of Law announced a $3 million donation from the Barretts to endow the O’Connor Justice Prize. 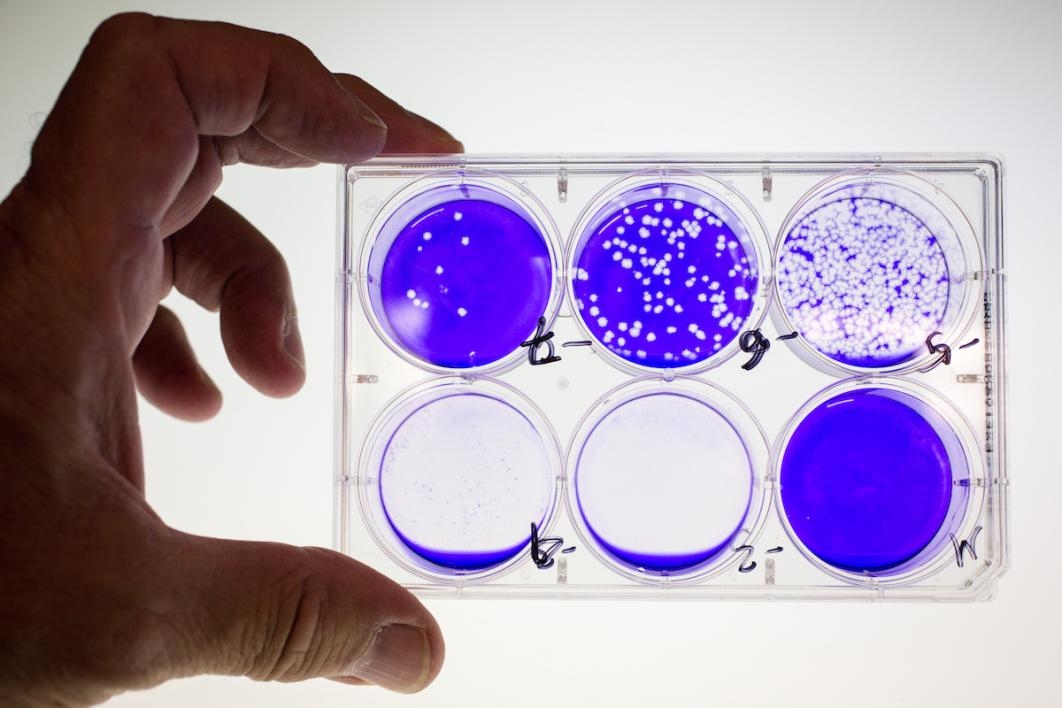 Women & Philanthropy, which brings together donors to vote on programs they will fund at the university, announced grants for ASU Biodesign Institute cancer research and College of Public Service and Community Solutions’ Inside-Out Prison Exchange Program to reintegrate formerly incarcerated individuals into society. Entomologists Lois and Charlie O’Brien donated their collection of insect specimens and an endowed professorship valued at $12 million. The gift, one of the world’s largest and most important collections, is transforming ASU’s Natural History Collections. Mariah McGhee (right) and Savannah Jacobs (second from left), members of the Great Sioux Nation and incoming freshmen at ASU, meet with Twila and Alan True, founders of the True Sioux Hope Foundation that is providing scholarships — including tuition, room and board, books, transportation and on-campus employment — for the students. “It was life-changing,” McGhee said. Reinvention of Sun Devil Stadium to become a year-round venue for learning, arts, commerce, recreation and athletics is underway with more than $80 million in private support raised for the project. “[It] will transform ASU’s most recognizable physical asset on campus into its largest relational asset,” said Jack D. Furst, Philanthropist of the Year. A group of students in ASU’s Engineering Projects in Community Service program generated $80,000 in fundraising to design and build “Engineering Smiles,” a mobile dental clinic to serve underprivileged areas in Arizona, California and Nicaragua.

“We are so genuinely grateful for our donors,” said ASU Foundation CEO Gretchen Buhlig. “Because of them, ASU is able to start closing the gap between jobs in Arizona that require a college degree and the number of Arizonans that have one. What’s more, they are genuinely doing good in the world through the research they enable and the programs that help our students who might not otherwise attend or graduate from college.”

The ASU Foundation is a private, nonprofit organization dedicated to advancing the mission of ASU as the New American University. It has consistently received the highest ranking for efficiency and transparency from Charity Navigator, the largest independent nonprofit evaluator, and was named a “Top Company to Work For in Arizona” by azcentral.com.

Top photo: Sun Devil Giving Day, an annual event each spring, raised more than $3 million in donations large and small from more than 1,000 supporters across the country. Photo by Charlie Leight/ASU Now

U.S. Secretary of State Rex Tillerson has seen a chance for progress in the conflict in Ukraine and has tapped Kurt Volker, executive director of the McCain Institute for International Leadership, a unit of Arizona State University, to work with both sides in the peace process.Kurt VolkerVolker was named a special representative for Ukraine negotiations on July 7 and immediately traveled to Kiev w... 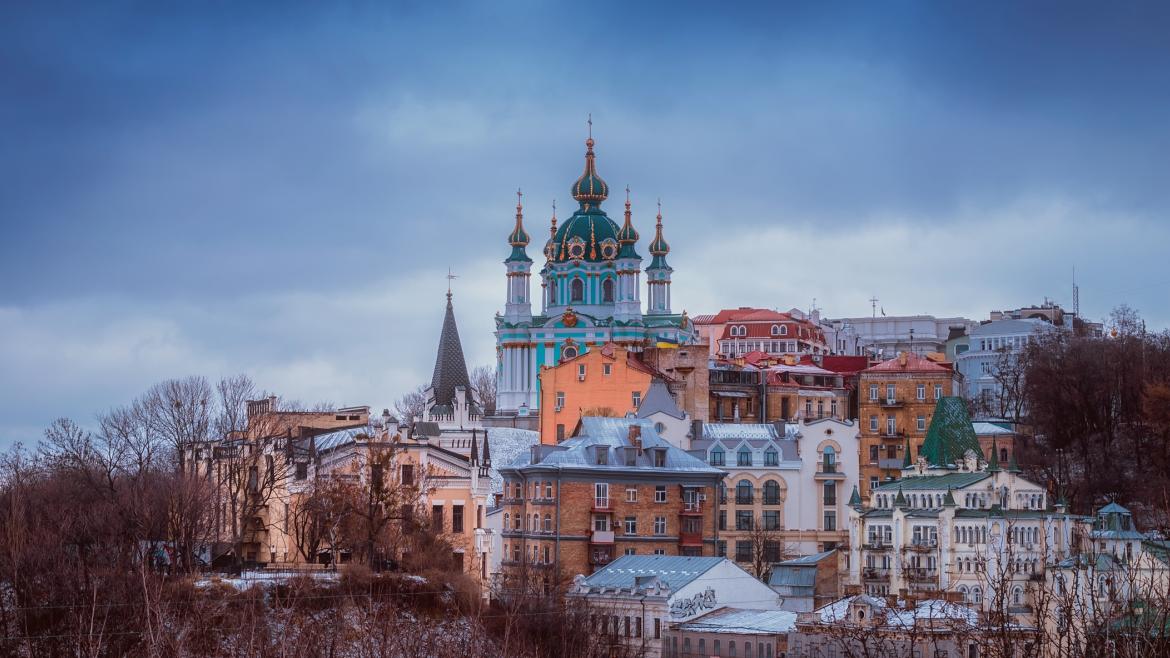 A former ambassador to NATO, he will work with both sides of urgent, deadly conflict

U.S. Secretary of State Rex Tillerson has seen a chance for progress in the conflict in Ukraine and has tapped Kurt Volker, executive director of the McCain Institute for International Leadership, a unit of Arizona State University, to work with both sides in the peace process. 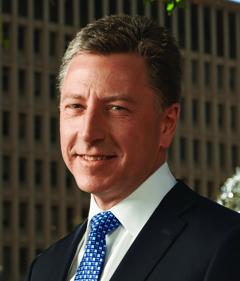 Volker was named a special representative for Ukraine negotiations on July 7 and immediately traveled to Kiev with Tillerson, meeting the president of Ukraine, Petro Poroshenko, and other key players.

Ukraine and Russia have been in a violent conflict since 2014, after Russia annexed Ukraine’s Crimean Peninsula. The fighting has cost some 10,000 lives. Volker is working on convincing both sides to comply with the Minsk Agreement, a blueprint for ending the tensions that was negotiated by France, Germany, Ukraine and Russia.

“This conflict has been around for over three years, and there are still daily cease-fire violations,” Volker said. “There are still people dying. In fact, more people died in 2017 than in prior years. It’s still an urgent issue that needs to be addressed.”

Volker has worked in the U.S. Foreign Service, as a legislative fellow on the staff of Sen. John McCain, as acting director for European and Eurasian Affairs for the National Security Council, and was appointed U.S. ambassador to NATO by President George W. Bush in 2008.

Volker answered some questions from ASU Now in between trips to Kiev.

Question: How did Secretary Tillerson come to appoint you to this role?

Answer: I had met Secretary Tillerson on a number of occasions from when he was preparing for his own confirmation hearing and also since he’s become secretary of state.

In getting to know him, he asked me if I would be willing to take on this role of giving a new impetus to the negotiations to resolve the conflict in Ukraine.

Q: Are you doing the nitty-gritty work of diplomacy in this position?

A: In the sense of traveling and meeting and trying to find solutions with all of the stakeholders, that’s what I’m doing. If it’s sitting at a table and scrubbing a text, adding and deleting, that’s not what I’m personally doing a lot of.

The issue is fundamentally a political issue rather than a textual issue. The reason there is conflict in Ukraine is not that there is something wrong with the text.

We need to tackle this issue at a strategic level, not a textual level.

Q: With whom did you meet?

A: On this visit to Ukraine I accompanied Secretary of State Tillerson. I stayed on after his departure and had meetings with the president, prime minister, several members of parliament, several ambassadors, the civil societyThe civil society refers to the non-governmental organizations and institutions that work for the citizens of a country., the Red Cross, the International Organization of Migration. I also had a number of meetings at the U.S. Embassy with our ambassador, Marie Yovanovitch.

I had a lot of meetings to understand who all the players are in Ukraine and to touch base with them directly and understand the shape of the conflict and what’s been done already.

Q: Will you be returning to Ukraine?

A: In order to carry out this responsibility, I’m going to travel a fair amount. I have not yet visited the line of contact, the cease-fire line in Ukraine. I expect to go back in 10 days to do that. In addition I’ll need to speak with the other players.

It will be an intensive period over the next several weeks because there is a sense of momentum right now.

Changing the status quo and really getting a settlement in Ukraine is something we’ll be able to figure out in a year or so, or less. It’s not going to be something that drags out forever.

Q: Have you been to Ukraine before?

A: I’ve worked on Ukraine as a substantive issue in terms of its reform, its integration into Europe and NATO, and I have many friends and contacts in Ukraine as a result of that. A lot of this is not new, but it’s the first time I visited there.

Q: Will you remain executive director of the McCain Institute?

A: Yes. Secretary Tillerson asked me to take on this responsibility, and I’m happy to do so and I’m doing it on a voluntary basis without compensation.

The McCain Institute was created as a “do tank” and we want to get our hands dirty and actually solve our problems, and so taking on this responsibility is very consistent with that approach at the McCain Institute.