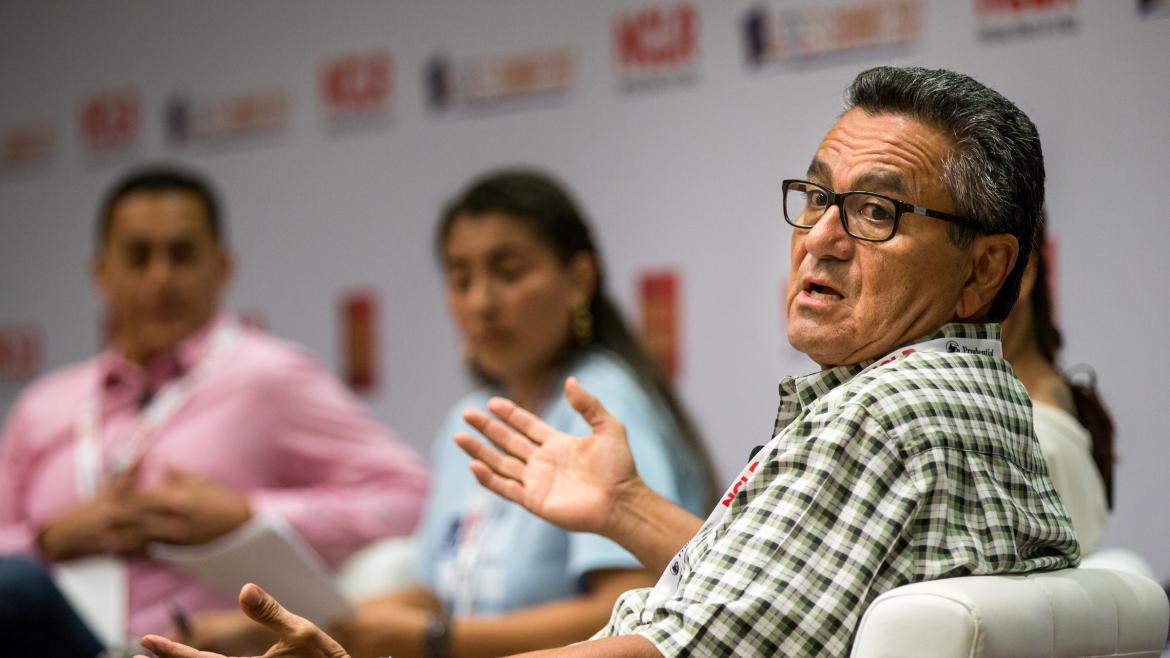 Embracing a fuller Latino history for a brighter future

Update: The National Council of La Raza on Monday said it will change its name to UnidosUS ("UnitedUS").

Young Latinos need to embrace the history that has been denied to them in order to fight for their civil rights, according to a panel discussion at the National Council of La Raza conference in Phoenix on Saturday.

The panel, “The Making of America: U.S. History Through the Latino Lens,” was part of the “Líderes Summit” section of the conference, for young people. The session was co-sponsored by Arizona State University; the university was also one of the overall conference sponsors.

Two of the panelists, both ASU alumni, told the room full of young people that they didn’t learn the positives of Latino history when they were growing up in Phoenix decades ago.

Daniel Ortega Jr., a Phoenix attorney (pictured above), said he and other Latino children were taught that anyone important was white.

“We were raised to understand that they were smarter, they had more money so they could do whatever they needed to do and they had control of everything,” he said. “There was no sense that we were treated differently. That’s just the way things were.”

Although he got good grades in school, Ortega was told he would take shop classes once he was in high school. But he rebelled because he was ambitious and wanted to go to college. A turning point came when several Latino activists from ASU visited his high school and exhorted the students to demand financial aid, using him as an example.

“ ‘Enough with the burrito sales and car washes,’ they said. And it was about me,” said Ortega, who earned a bachelor’s degree in political science from ASU in 1974. In 1977, he graduated from what was then the ASU College of Law, and in 1984 he became a founding member of Los Diablos, the official Latino chapter of the ASU Alumni Association.

He told the teenagers at the session: “Never forget who helped you and who you will help. My commitment to my community came from that time.”

Stella Pope Duarte, an author and teacher at Phoenix College, said that when she was a child in South Phoenix, there a television show about her neighborhood that called it a “slum.”

“In school they didn’t let us speak Spanish, and I would get demerits. They were shaming us. When you take away someone’s language, you take away their identity,” said Pope Duarte, who earned bachelor’s and master’s degrees from ASU.

Pope Duarte said the exclusion of Latino history is continuing with the banishment of an ethnic studies course in the Tucson Unified School District — a move that is still being litigated.

“They went into the classrooms … and one of the books they pulled out was mine, ‘Let Their Spirits Dance,’ because I talk about our kids serving in Vietnam in much higher numbers than the general population,” she said. 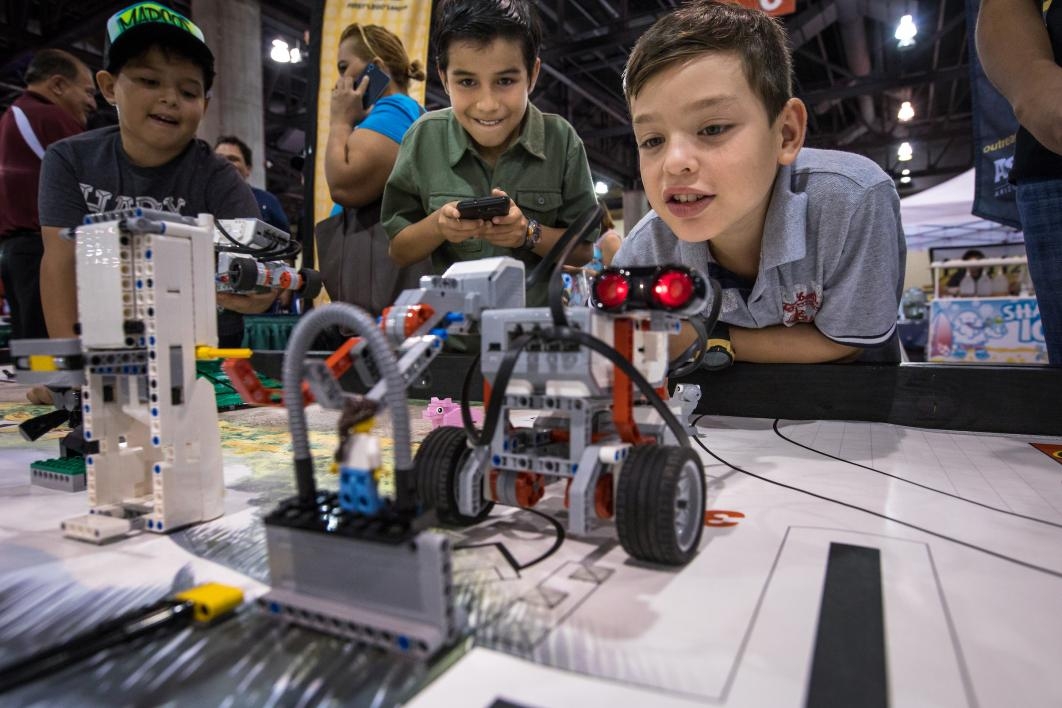 Santiago Calvo (right), 9, of Memphis, watches as his cousin, Marco Villa, 11, also of Memphis, directs a First Lego League bot to pick up a hooped device at the National Latino Family Expo, part of the 2017 National Council of La Raza annual conference, on Saturday at the Phoenix Convention Center. ASU co-sponsored the K-12 robotics exhibition with the Si Se Puede Foundation. 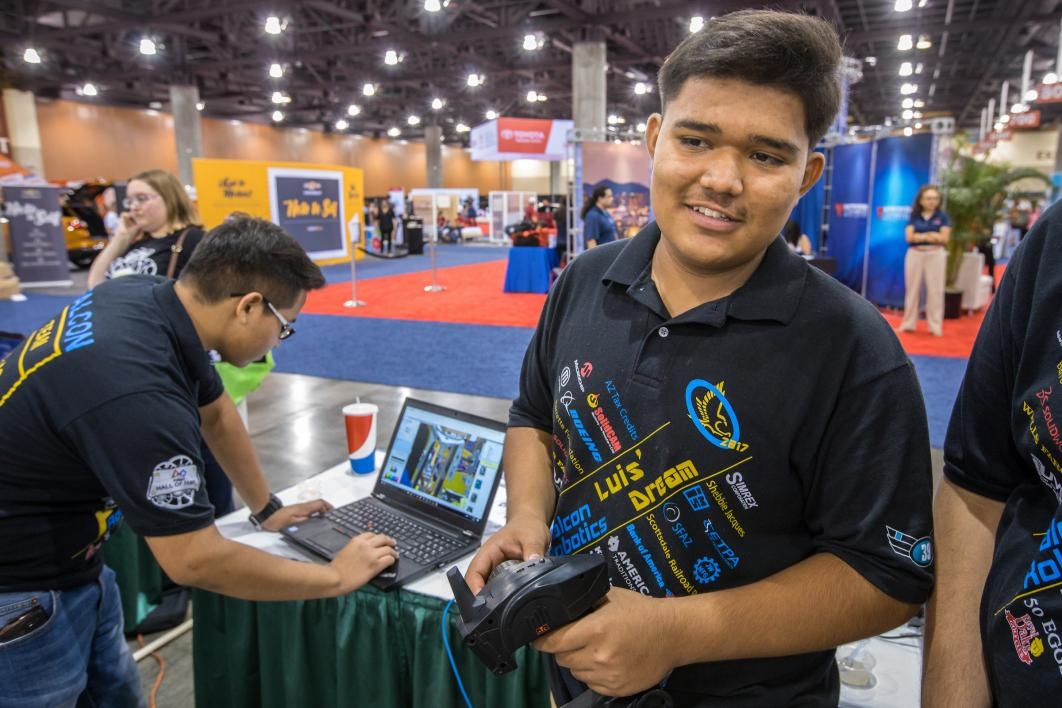 Uriel Rodriquez, 16, a junior at Carl Hayden High School in Phoenix, steers his school's robot, Luis' Dream, Saturday at the Phoenix Convention Center. The team had six weeks to design, machine, build and program the robot for competitions in Las Vegas and Flagstaff. The robot came in third place in both competitions. 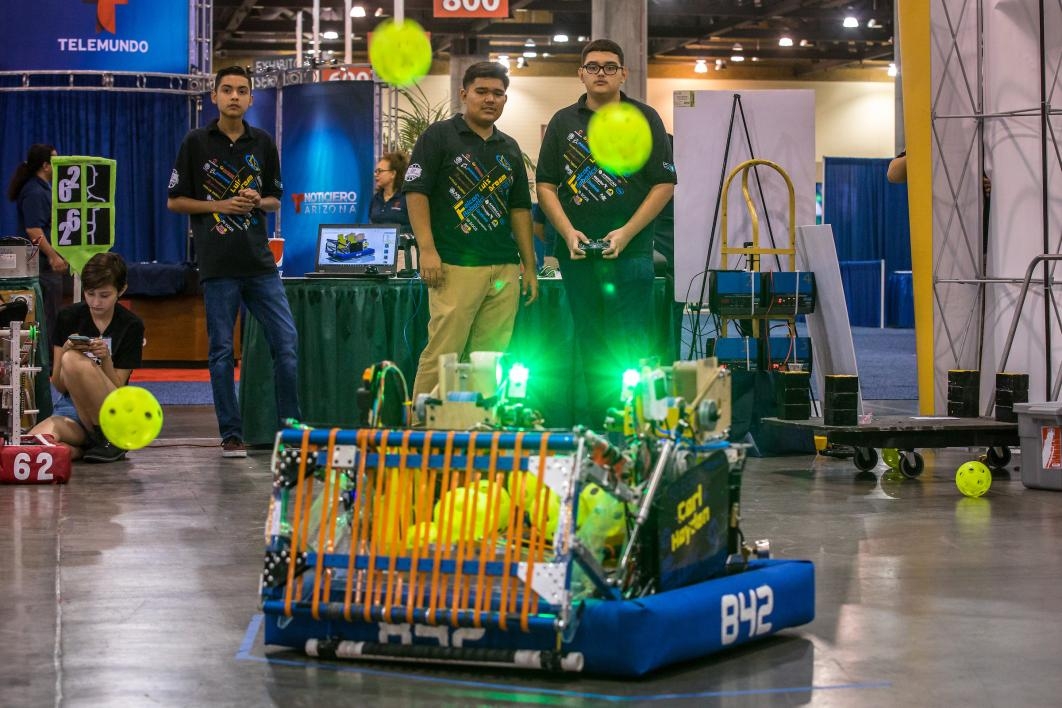 Carl Hayden senior Bryan Garcia (right), 16, commands his school's robot, Luis' Dream, to shoot its balls at a target during the family expo at the National Council of La Raza conference Saturday. 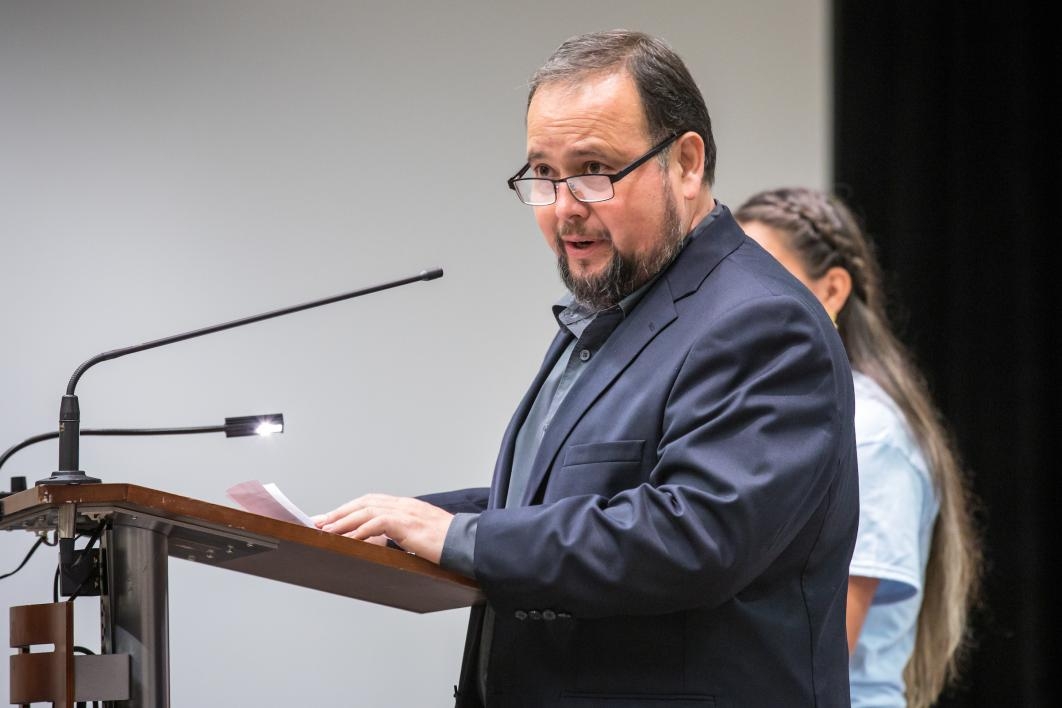 Alejandro Perilla, the director of the ASU Center for Community Development and Civil Rights, speaks before the panel discussion on "The Making of America: U.S. History Through the Latino Lens," on Saturday afternoon at the National Council of La Raza conference. Perilla is a former staff member of the NCLR. 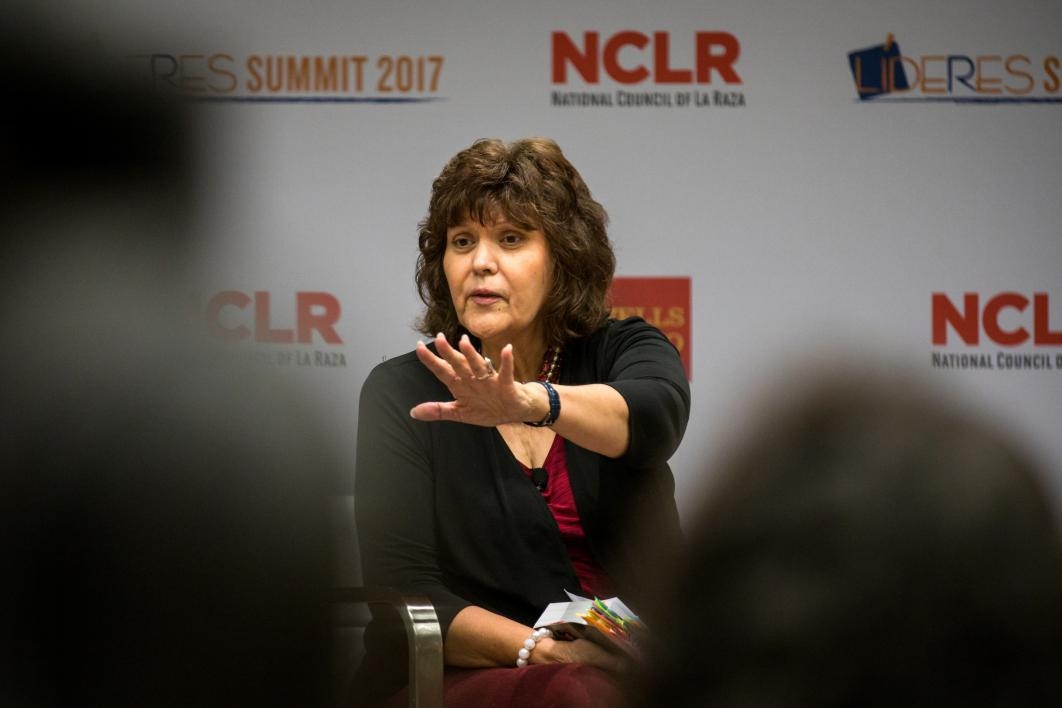 During the "Making of America" panel, Phoenix author and ASU alumna Stella Pope Duarte encourages students to fight for their rights by organizing. She is the author of "Raul H. Yzaguirre: Seated at the Table of Power," a new biography about the Texas native who, as president and CEO of the National Council of La Raza, built it into the largest Latino advocacy organization in U.S. history. 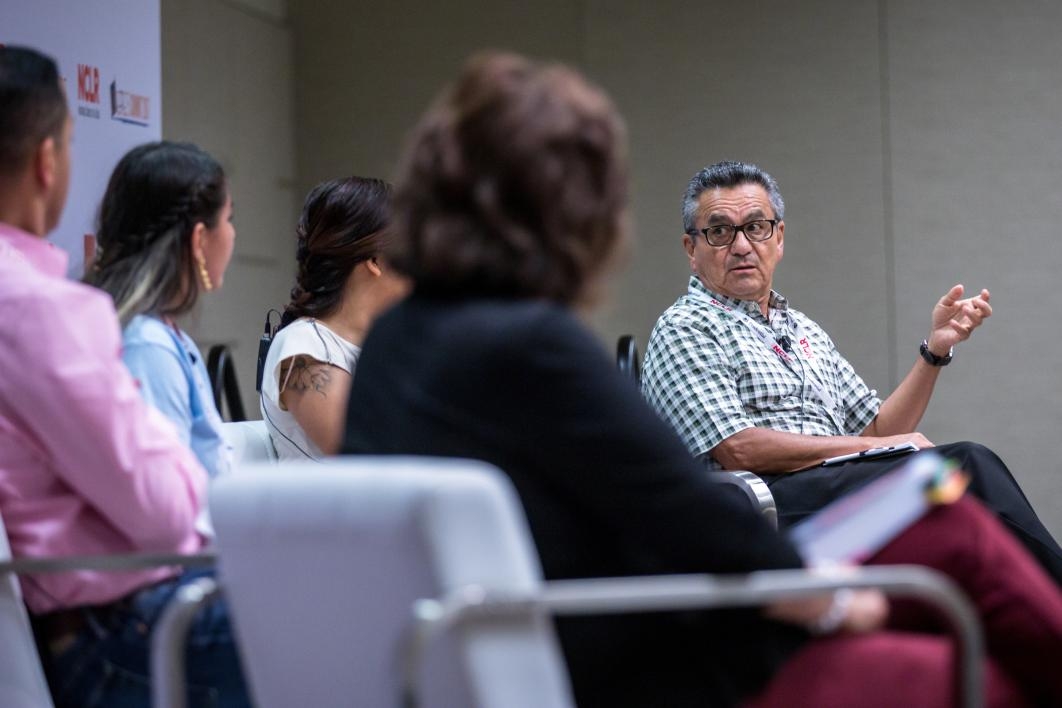 Phoenix attorney and ASU alumnus Daniel Ortega Jr. tells the audience at the panel discussion "The Making of America" that while growing up in Phoenix, he and other Latino children were taught that anyone important was white. Ortega, a former board chair of the National Council of La Raza, encouraged the students to never forget who helped them. 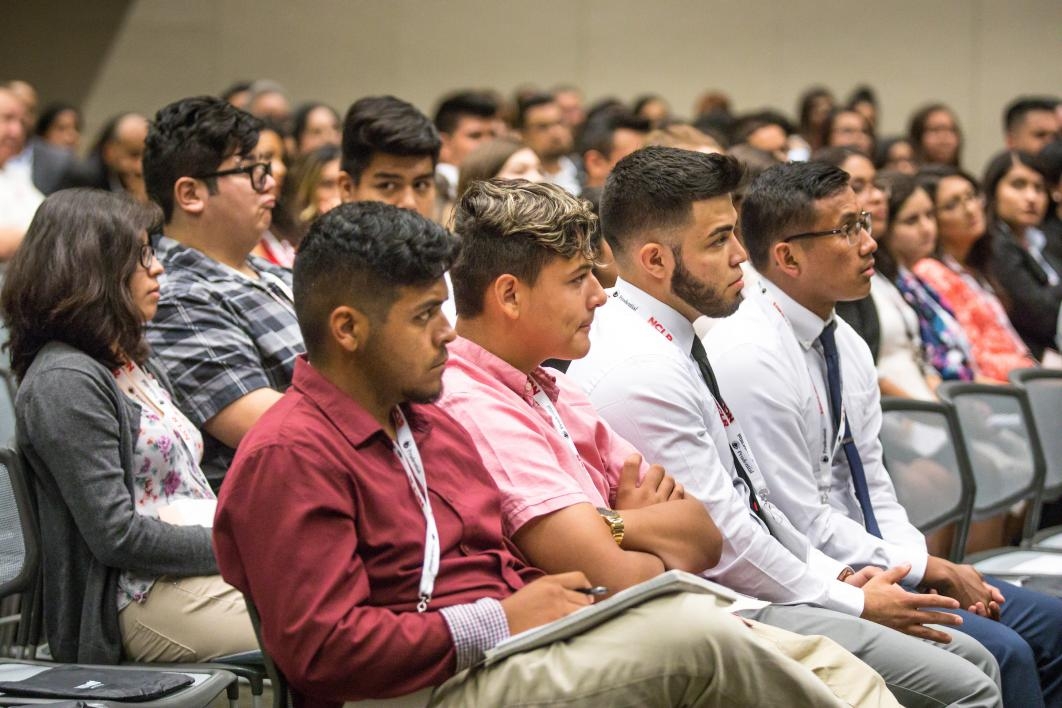 Around 150 people, many high school and college students, attend the panel discussion on "The Making of America: U.S. History Through the Latino Lens" on Saturday afternoon at the Phoenix Convention Center. 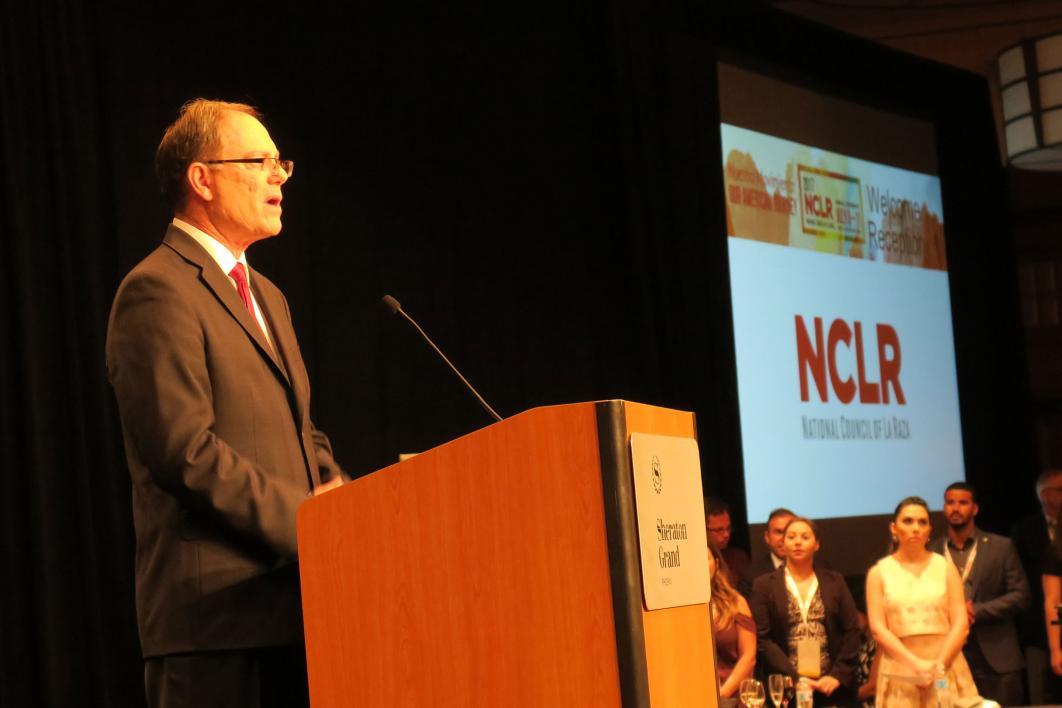 Patrick Kenney, dean of ASU's College of Liberal Arts and Sciences, formally announced to the general reception at the convention Saturday evening the creation of the Raul Yzaguirre Chair in the School of Politics and Global Studies. “This chair extends and memorializes the work that Raul has done in his career,” Kenney said. 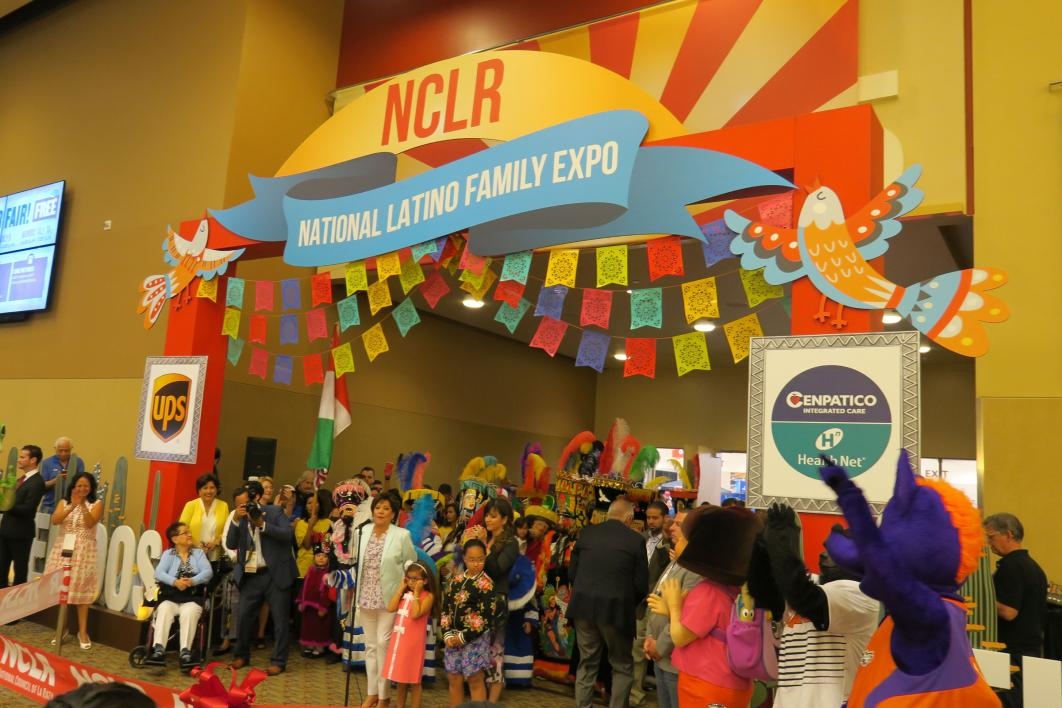 A crowd gathers for the opening of the conference’s three-day National Latino Family Expo, which was free and open to the public. The expo featured interactive demonstrations, entertainment, educational resources and health screenings, as well as the robotics exhibition.

“Our Latino people have always loved this country and been patriotic and been committed to serving.”

Pope Duarte is the author of “Raul H. Yzaguirre: Seated at the Table of Power,” a brand-new biography of the Texas native who, as president and CEO of the National Council of La Raza, built it into the largest Latino advocacy organization in American history.

Pope Duarte told the young people to get out and fight for their rights by organizing.

“Even as a young child, Raul Yzaguirre understood that,” she said. “Leadership is a life choice.”

After working at NCLR for three decades, Yzaguirre came to ASU in 2005 as a professor of practice and founded the Center for Community Development and Civil Rights at the Downtown Phoenix campus. He also launched the American Dream Academy, a program to help low-income families navigate the path to college.

ASU honored Yzaguirre’s work by naming a professorship after him — the Raul Yzaguirre Chair in the School of Politics and Global Studies. The first professor to hold the chair will be Rodney Hero, the former president and first Latino president of the American Political Science Association. He’ll be leaving the University of California, Berkeley, to come to ASU.

Yzaguirre was not able to attend the NCLR convention over the weekend, but Patrick Kenney, dean of ASU’s College of Liberal Arts and Sciences, honored the civil rights leader as he formally announced the creation of the named professorship to the general reception at the convention.

“This chair extends and memorializes the work that Raul has done in his career,” Kenney said.

Kenney then showed a video (available below) about Yzaguirre in which ASU President Michael Crow described the importance of the endowed chair.

“Raul is a designer and architect and driver of change, an initiator of new solutions, working with everyone to design the future. At ASU, that’s what we’re about — designing the future, and improving that design by what we build, not what we talk about.

Top photo: Phoenix attorney and ASU alumnus Daniel Ortega Jr. speaks during the panel discussion on "The Making of America: U.S. History Through the Latino Lens" on Satureday at the National Council of La Raza converence in Phoenix. Photo by Charlie Leight/ASU Now

An important contributor to the efficiency in Photosystem II is mediation of charge separation by a tyrosine residue (Tyrz). Oxidation of Tyrz as part of the charge separation process occurs in concert with transfer of a proton from the oxidized tyrosine to a neighboring histidine (His) residue. This concerted electron-proton transfer not only promotes charge separation, but also generates a proto...

An important contributor to the efficiency in Photosystem II is mediation of charge separation by a tyrosine residue (Tyrz). Oxidation of Tyrz as part of the charge separation process occurs in concert with transfer of a proton from the oxidized tyrosine to a neighboring histidine (His) residue.

This concerted electron-proton transfer not only promotes charge separation, but also generates a proton with the thermodymanic potential to drive water oxidation. Proton-coupled electron transfer is thus critical to the overall light energy conversion process. In turn, understanding how to design and control concerted proton-electron transfer is also important in the development of artificial methods for solar fuel production based on Photosystem II, and other technologies that require managing proton activity. 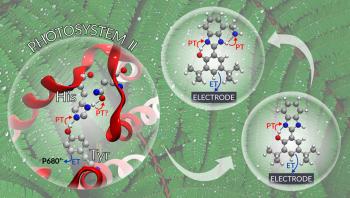 Photosystem II is the first protein complex in the light-dependent reactions of oxygenic photosynthesis. It captures photons and via charge-separation uses the energy to oxidize water. The TyrZ-His redox-relay pair couples proton transfer to the redox process between P680 and the water oxidizing catalyst in photosystem II.

In a recent collaborative study with researchers from the University of Illinois, Université Paris-Sud and the University of Virginia, Tom Moore, Ana Moore and Devens Gust of Arizona State University's School of Molecular Sciences recently showed how theory can be used to guide the design of a concerted electron–proton transfer process, inspired by the a TyrZ-His pair in Photosystem II.

The study used artificial redox relays based on phenol/benzimidazole pairs to test the theory that a concerted two proton transfer process associated with the electrochemical oxidation of the phenol would take place when the benzimidazole substituents are strong proton acceptors, such as primary or tertiary amines. Theory also predicts a decrease in the redox potential of the phenol and a small kinetic isotope effect (KIE). Electrochemical, spectroelectrochemical and KIE experimental data provide strong evidence to support these predictions. The work was described in a recent paper in ACS Central Science.

As Tom Moore explains, “Inspired by nature, and working closely with Professor Hammes-Schiffer's group at the University of Illinois, we designed a proton coupled electron transfer construct and demonstrated that two proton transfer steps could be driven by one electron transfer step. … This work could be important in solar energy conversion to fuels, in the construction of artificial neural networks for artificial intelligence, and in general for the use of electricity to power proton currents and support lifelike processes in artificial cells.”

This study is significant because it shows that theory can be used to guide the design of artificial systems for energy conversion. Protons are important in myriad ways for solar fuel production, so the results of this study also have implications for managing proton activity to optimize efficiency at energy conversion sites involving water oxidation and reduction.