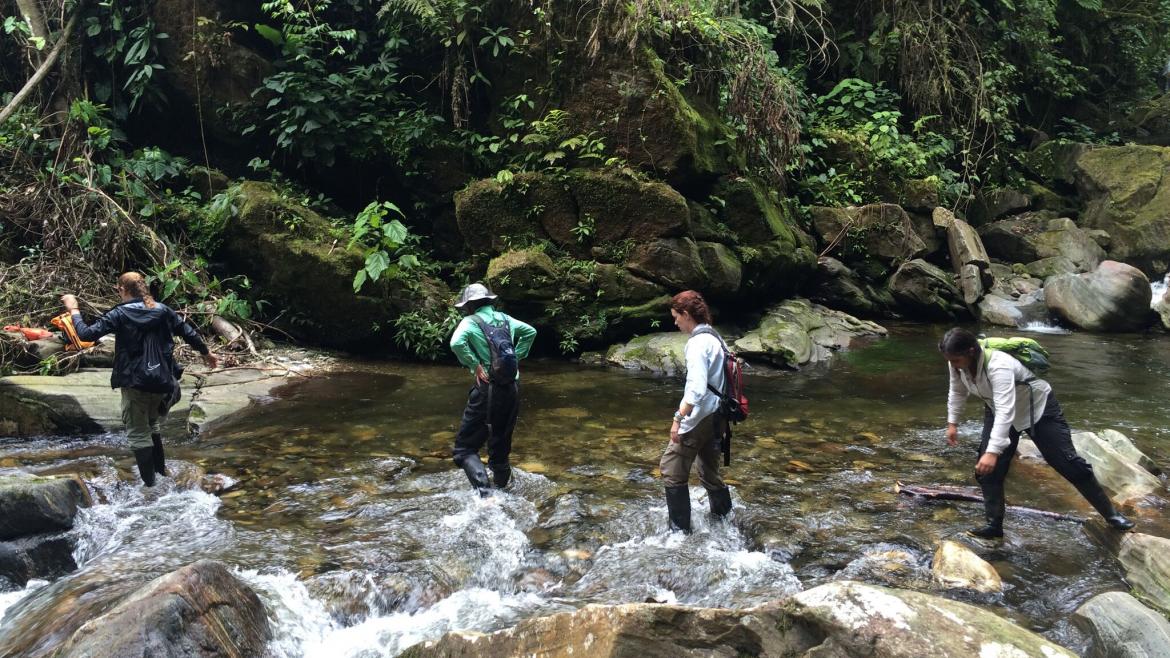 Imagine you’re on a 28-mile journey that takes you across icy rivers and up steep jungle trails. After a grueling two days, you and your research team catch your first glimpse of the mountaintop archaeological site Ciudad Perdida, the “Lost City.”

It may sound like the opening scene of a summer blockbuster, but it was a recent reality for one mother of three, military spouse and Arizona State University online student.

Kristin Keckler-Alexander spent last summer at a field school in Colombia. Although the trek to the site itself was long, her journey really began several years before, when she was working toward an associate’s degree in history.

During that time, a “crazy-amazing professor” made anthropology come alive for her, she said, and got her interested in the connections between history and archaeology.

At an adviser’s recommendation, she later transferred to ASU Online and is now in the process of earning an undergraduate degree in anthropology, a minor in global health and a 4+1 master’s degree in history through the School of Human Evolution and Social Change and the School of Historical, Philosophical and Religious Studies.

“ASU Online gave me — a military spouse with three children who doesn’t live anywhere for very long — the opportunity to pursue my degrees, and that’s not something I would have at a brick-and-mortar institution,” she said.

“A lot of people seem to think that getting an online education is super easy,” she added, “but this learning style comes with its own set of challenges.”

Besides self-motivation, organization and an openness to unique communication workarounds with professors, online students also require a willingness to seek out their own extracurricular experiences.

"You dive into something, and you find out new information which leads you to new, bigger questions. And that’s part of the fun of it."
— Kristin Keckler-Alexander

Not wanting to miss out on the grit and real-world adventure of archaeological research, Keckler-Alexander found a program that allowed students to work in the field — in this case, at Ciudad Perdida.

Located high in the Sierra Nevada on the north coast of Colombia, the sprawling, terraced site was built by the Tairona people around AD 800.

“Getting to the site is pretty intense, but you fall in love with it as soon as you’re there,” she said. “It was definitely one of those life-changing experiences.”

Keckler-Alexander and the team with her camped on the site for a month. During that time, tasks such as historic reconstruction, archaeological survey, excavation and topographic mapping cemented a passion for fieldwork and taught her that each discovery only leads to more curiosity.

“You dive into something, and you find out new information which leads you to new, bigger questions,” she said. “And that’s part of the fun of it.” The archaeological site Ciudad Perdida. Wooden structures once stood on the stone platforms. Keckler-Alexander takes topographical measurements of the site with a total station. 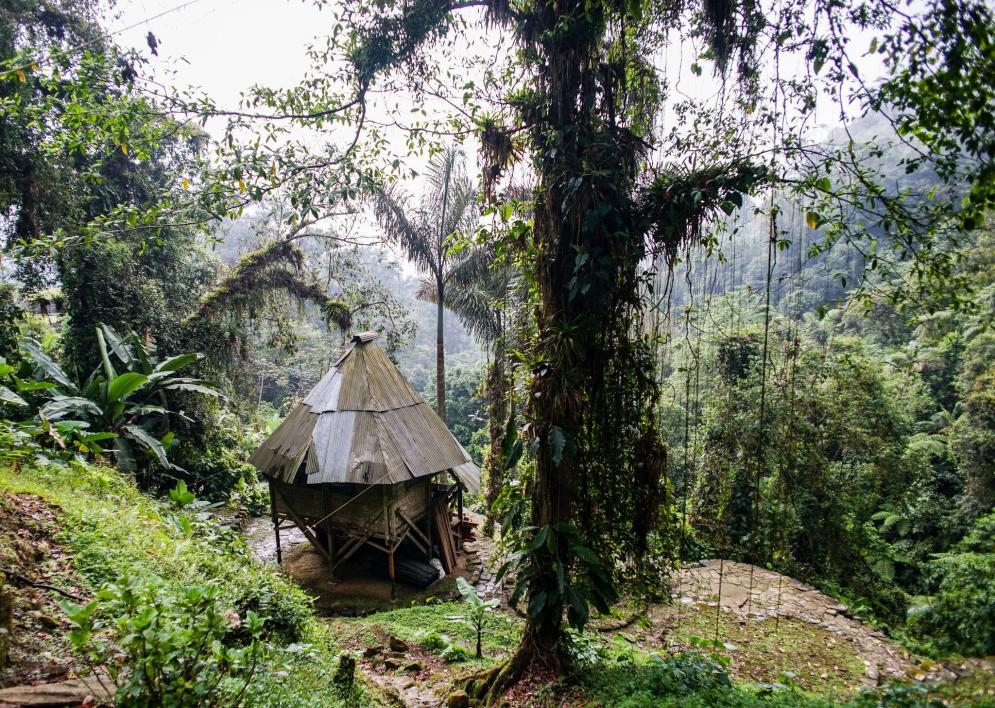 Jungle now covers most of the site. Keckler-Alexander helps out with excavations during her time at the site. 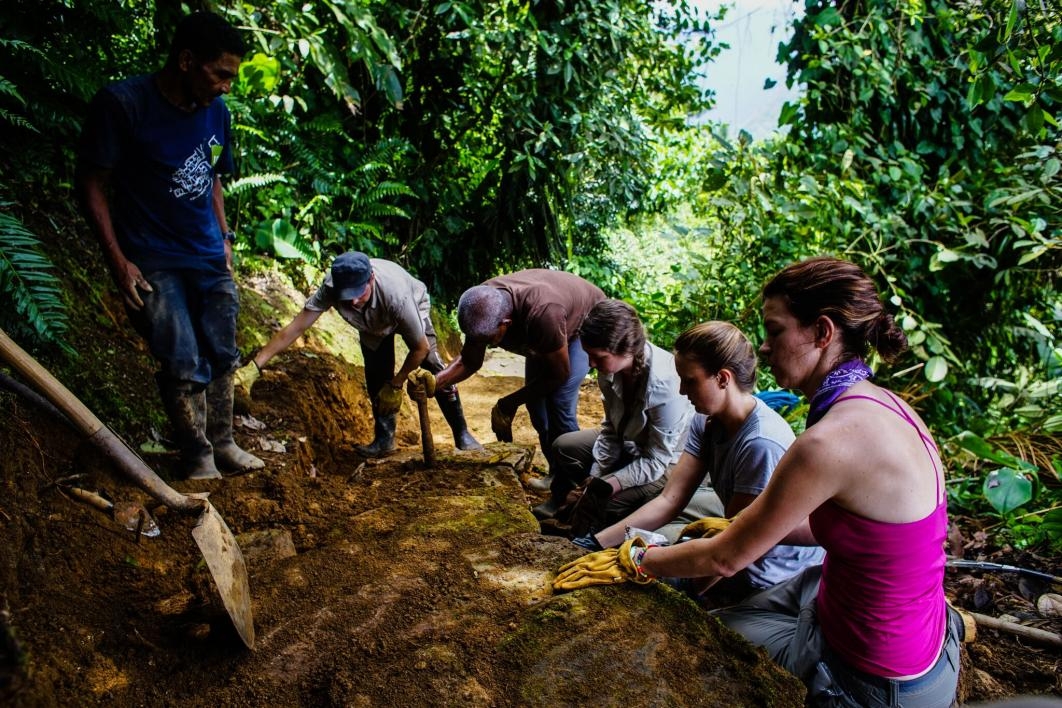 Keckler-Alexander (far right) and the research team work together to excavate.

This summer, in addition to continuing her online studies, Keckler-Alexander is taking advantage of several other opportunities to work in her field, including an ongoing project with the Society for American Archaeology to advise the Boy Scouts on the archaeology merit badge. She’ll also be heading to the Kansas State Historical Society field school with one of her sons, and she is anticipating the publication of a scholarly paper she wrote as a capstone project for her history degree.

The paper describes a little-known, WWI-era women’s civic organization that nonetheless had a big impact in the Midwest. Members of the Military Sisterhood of America provided financial charity, negotiated discounts for goods sold to soldiers, and even organized lawyers in Kansas and other Midwestern states to offer free legal services to military families.

“I became very passionate about making sure that people knew who these remarkable women were,” Keckler-Alexander said. “In my opinion, they were the precursor to a lot of the standard Army community service activities that we have today.”

Once she completes her master’s degree, Keckler-Alexander plans to apply to an archaeology doctoral program, though she may take some time off beforehand to work in the field. Her hope is to someday return to the sites in Colombia and bring her daughter with her, so that she too can be inspired by all the female scientists there.

Jeff McMahon, associate professor in the School of Film, Dance and Theatre, presented an evening of his recent monologues at the Dixon Place Lounge in New York City July 12. The evening included performances by ASU students and alumni.Theatre alum Heather Lee Harper performed one of McMahon’s new monologues, “The Welcome,” and alum Toussaint Jeanlouis presented a new short piece he is devel...

Jeff McMahon, associate professor in the School of Film, Dance and Theatre, presented an evening of his recent monologues at the Dixon Place Lounge in New York City July 12. The evening included performances by ASU students and alumni. In the fall of 2016, McMahon wrote “(Ob)scene,” a short monologue in response to the mass killing by a lone gunman in the mostly Latinx/LGBTQ Pulse nightclub in Orlando, Florida. In the monologue, he takes the point-of-view of the shooter, the unstable and deeply disturbed young man who decides he is going to embark on this killing spree as a perverse extension of his theatrical training. The monologue was selected for “After Orlando: An International Theatre Action,” a collection of scripts from more than 70 playwrights. Selections from the series were presented in more than 50 theatres throughout the world, royalty-free. McMahon’s monologue was selected for several of those evenings, including as part of the Phoenix presentation of “After Orlando” in January when it was performed by Ferderer and directed by School of Communications Associate Professor Amira De la Garza.

Following the July 12 event, McMahon will make a film of “(Ob)scene.” A film alum, J. Miguel Munguia, will be editor on the project, and Steven Reker will be scoring the film.