Craig Allen, an associate professor at the Walter Cronkite School of Journalism and Mass Communication, has been appointed as the new associate dean of Barrett, the Honors College for Arizona State University’s Downtown Phoenix campus.

Allen will supervise Barrett’s downtown faculty and staff who serve approximately 700 students and will continue to serve on the Cronkite faculty, teaching an honors course for the school in the spring semester. 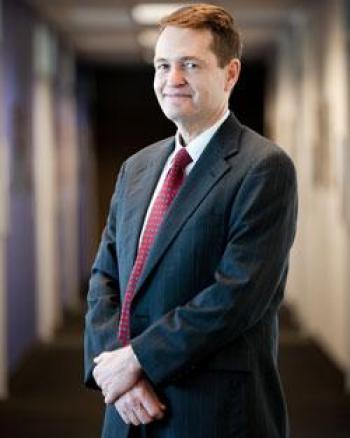 Craig Allen, an associate professor at the Cronkite School, has been appointed as the new associate dean of Barrett, the Honors College for ASU’s Downtown Phoenix campus. Download Full Image

“Craig Allen is a great faculty member to be the leader of Barrett at the Downtown Phoenix campus,” said Mark Jacobs, dean of Barrett and ASU vice provost. “He is extremely well connected to faculty and staff of the downtown campus through his teaching and university service. He loves honors students and has taught them and advised them for years, and he is a friendly, collaborative person.”

Jacobs said Allen will focus on expanding Barrett’s footprint on the Downtown Phoenix campus, working to grow the number of overall honors students, courses and research opportunities. He also is tasked with increasing collaboration between Barrett and a multitude of city and community groups in downtown Phoenix.

“I am privileged to join the leadership, staff and faculty of Barrett and look forward to Barrett downtown for future pursuits,” said Allen, who starts his new position today.

At the Cronkite School, Allen established himself as a leader in international communication and mass media history. His scholarly interests — expressed in more than 100 book chapters, publications, conference papers and reviews — center on television news, the rise of private media around the world and the history of the first female newscasters in broadcast news.

“Craig has played an important role at the Cronkite School for more than 25 years through his scholarly research and his dedicated commitment to training the next generation of journalists,” said Christopher Callahan, dean of the Cronkite School and ASU vice provost. “We congratulate him on this new endeavor.”

Allen, who joined the Cronkite School in 1991, has written two books, one of which was “Eisenhower and the Mass Media: Peace, Prosperity and Prime Time TV.” He is the past president of ASU’s Downtown University Senate and member of the University Academic Council and ASU General Studies Council.  He currently chairs the University Hearing Board and is active in ASU’s Title IX activities.

Prior to receiving his doctorate from Ohio University in 1989, he was a newspaper reporter at the Oregon Journal in Portland and a news director and manager of television stations KMGH in Denver, KRDO in Colorado Springs and KHQ in Spokane. In March 2003, Allen was named an International Radio and Television Society Fellow.

He also has been active as a consultant to television news organizations outside the U.S. His foreign assignments have included ICTV in Ukraine, TVB in Indonesia and Pop TV in Slovenia.

He has contributed to numerous television productions, including a documentary on the 1988 U.S. presidential campaign that was prepared by Channel 4 in London and telecast to viewers in the United Kingdom.

In a world transformed by globalization, many individuals find themselves working with others across national borders and cultural barriers. This international cooperation in the world of business has become even more important as the social dynamics between the leaders of the United States and the rest of the world shift in the modern era.ASU alumna Anisha Hindocha, director of logistics at FIRST...

In a world transformed by globalization, many individuals find themselves working with others across national borders and cultural barriers. This international cooperation in the world of business has become even more important as the social dynamics between the leaders of the United States and the rest of the world shift in the modern era.

ASU alumna Anisha Hindocha, director of logistics at FIRST Global, deals with international governments and corporations on a daily basis, ensuring that students from over 140 countries have the opportunity to take part in a global robotics competition. 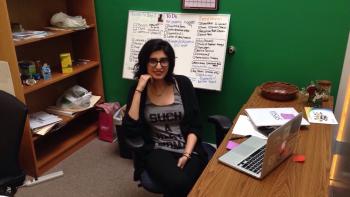 Since she deals with countries with differing social norms, Hindocha has had to adapt — and her years at Arizona State University's School of Politics and Global Studies (SPGS) has enabled her to take it in stride. One of the challenges, according to Hindocha, was getting used to the work schedule of other cultures.

“Before this job I knew that the Muslim world doesn't work on Fridays but I had never been affected by it," Hindocha said. "Now, though, I know I can't make calls there on Fridays, which means changing my schedule a lot.”

Hindocha has also had to manage the trickiness of international politics while working at FIRST Global, dealing with the State Department and other international groups. This means coping with policies, such as President Trump’s proposed travel ban on Muslim-majority nations, as well as ensuring students in nations that are economically sanctioned have access to the robotics kits vital to the competition.

“My learning experiences at SPGS have taught me to be detailed and meticulous which are key to my job," Hindocha said. "Additionally, I have learned to communicate best with people from around the world, who are of my faiths, creeds and cultures.”

During her time at ASU, Hindocha completed a junior fellowship with political science lecturer Gina Woodall.

“I think that opportunity helped me a lot. It taught me to be dedicated to students, which has translated into what I do now,” Hindocha said.

Reflecting upon her time at FIRST Global, Hindocha remarked that helping the students, whether with visa applications or ensuring their robot was received, was the most rewarding part of the job.

“[It’s] about the kids and giving them the opportunity to build a robot, and when one of those things becomes a reality, nothing is more rewarding.”