Never in the history of human existence has the opportunity to genetically modify or protect life been as great and accessible to anyone interested in the topic as it is today.

Arizona State University experts will delve into the issues presented by biotechnology during the annual International Biosafety and Biosecurity Symposium (SIBB) held this year in Morelia, Mexico, and organized by the Asociación Mexicana de Bioseguridad (AMEXBIO), June 7–10.

“We’re enhancing biosafety and biosecurity across international borders,” said Irene Mendoza, associate biosafety officer with ASU’s Office of Environmental Health and Safety, who will be one of the featured speakers at the symposium. “Anything that affects Mexico, like the release of a pathogenic agent, can travel north and affect us.”

Although infectious diseases will be addressed at the symposium, the ASU delegation will lead a technical discussion on gene editing and gene drive technologies, said David Gillum, ASU Environmental Health and Safety associate director and institutional biosafety officer. In simplest terms, it’s about the ability to modify plants or mammals by manipulating their genome — i.e., the chromosomes in each cell of an organism.

“These technologies can drive a change in an entire species from just one modification,” Gillum said. “It can be propagated in all future generations.” 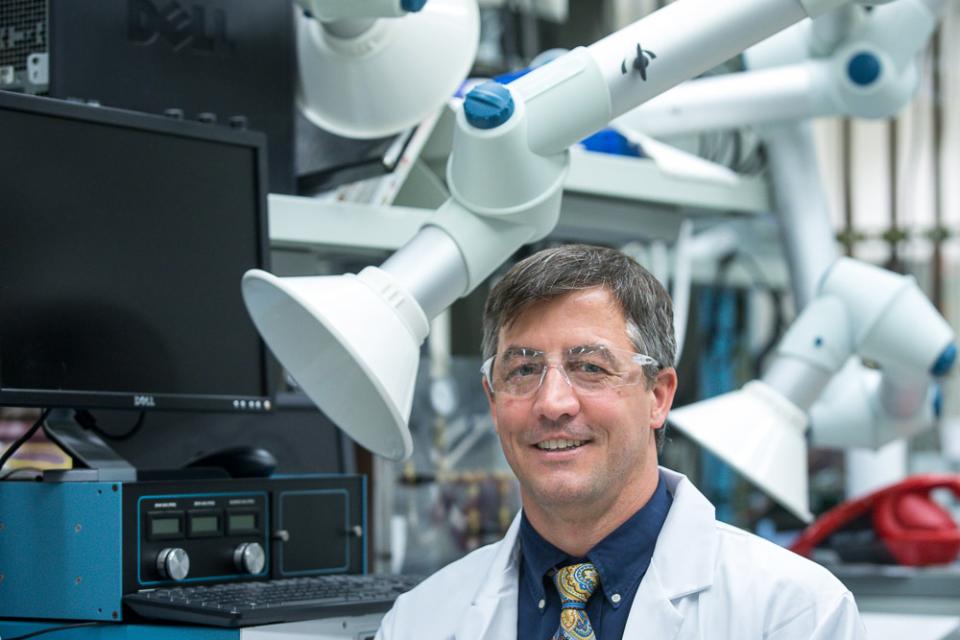 The gene drive of mosquitoes, for example, can be modified so the specific types that carry malaria and Zika will not reproduce and eventually die off. But once their genome is changed and released into the environment, there is no easy way to predict any unintended consequences.

“That’s what is scary about it,” Gillum said. “There’s no easy undo button.”

The leading gene editing method capable of making such changes is called CRISPR Cas9. This technological process takes advantage of the immune systems of bacteria to delete nucleic acids in living cells and replace them with the desired nucleic acid to change the genome.

“When you’re doing this genome editing, you’re looking for very specific nucleic acids to change,” Gillum said. “Let’s consider that you have sickle cell anemia and you have one gene that is wrong, and you just want to target that one gene. But the genome is huge; there are billions of base pairs. So how do you make sure that you target the one that you’re looking for and not similar sequences somewhere else in your body?”

Unlike past costly and complex genome editing technologies, CRISPR Cas9 is simpler, relatively inexpensive and thus more accessible to people who may not be working in a modern laboratory with established biosafety policies and procedures.

“There are a lot of citizen labs all over the place where science enthusiasts are getting together in their garages and experimenting,” Mendoza said. “The risk is that although they may just be trying to do something fun, what they create may have unintended consequences.” 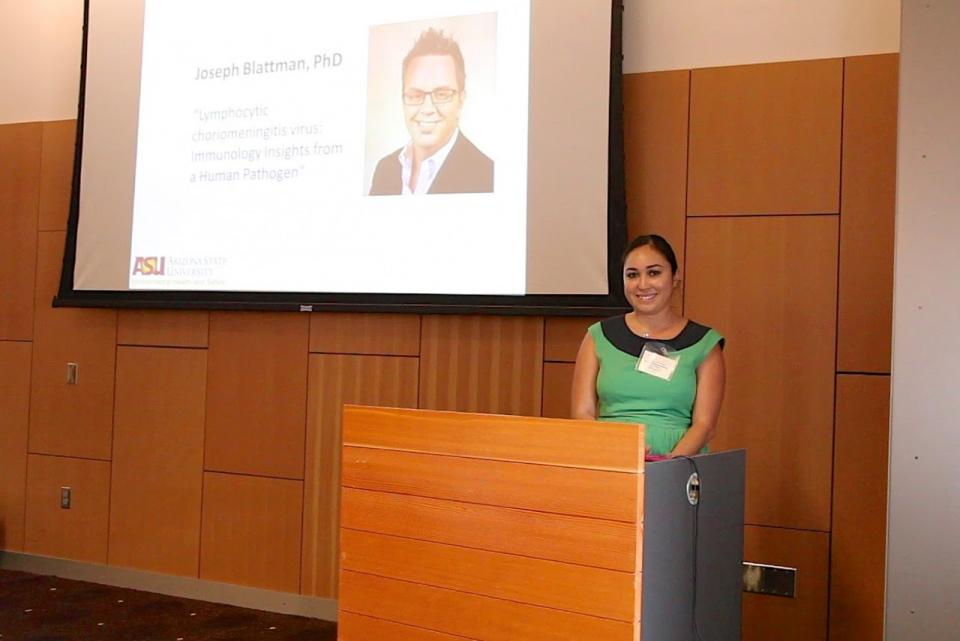 Irene Mendoza, associate biosafety officer with ASU’s Office of Environmental Health and Safety, will be one of the featured speakers during the annual International Biosafety and Biosecurity Symposium held this week in Morelia, Mexico, and organized by the Asociación Mexicana de Bioseguridad.

The use of CRISPR Cas9 has increased in Mexico in the past few years, Gillum said. Experts there recognize the challenge, and that drives such events as the SIBB, which includes participation from other Latin American countries.

“What we want to achieve in SIBB is to continue the academic efforts of diffusing specific knowledge on biosafety and biosecurity, as well as raise awareness among those involved in manipulating biological agents,” said Luis Alberto Ochoa Carrera, AMEXBIO president and founder. “The importance of the work of AMEXBIO is based on the need to create a ‘biosafety culture’ and ‘appropriate communication’ within institutions to mitigate risks associated with experimenting with biological agents.”

ASU contacts AMEXBIO remotely throughout the year, but opportunities exist to engage in person and at a higher level by way of training sessions, site visits, joint research and other symposia to address the wide array of biosafety and biosecurity aspects.

“There is a huge opportunity here for ASU and AMEXBIO in Mexico to partner on these projects,“ Gillum said. “They’re very interested in biodefense. We’re looking into philanthropy to help with funding that will allow us to form a more strategic partnership.”

With funding, ASU biosafety experts like Gillum and his team can work with AMEXBIO to visit labs in Mexico to observe operations and offer suggestions on improving safety and security.

Forming strategic links between biosafety and biosecurity experts across the border enables mutual collaboration and training in the region, Ochoa Carrera said.

“AMEXBIO recognizes ASU’s efforts and transcendence in Mexico and within the international biosafety community,” Ochoa Carrera said. “The ASU and AMEXBIO alliance enables the dissemination of knowledge in this field, and it’s also an area of opportunity between Mexico and the United States.”

Amy Rajnisz was that one student in high school who could never answer the question: "What do you want to be when you grow up?"So after high school, she did some soul-searching. She spent her first two years of college at Chandler Gilbert Community College focusing on general credits that could apply to any liberal arts degree. After a slew of frustrations and self-doubt, Rajnisz's “aha” mom...

Amy Rajnisz was that one student in high school who could never answer the question: "What do you want to be when you grow up?"

So after high school, she did some soul-searching. She spent her first two years of college at Chandler Gilbert Community College focusing on general credits that could apply to any liberal arts degree. After a slew of frustrations and self-doubt, Rajnisz's “aha” moment came when she discovered a way to cope with those difficult times — she found relief in writing. 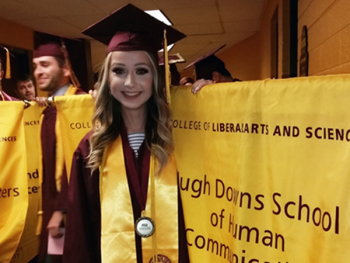 “I've always known of my passion for writing but I never thought about pursuing it,” she said. “For the first time, I had my sights set on something.”

Now, Rajnisz is an Arizona State University alumnus from the Hugh Downs School of Human Communication and recipient of the 2017 College of Liberal Arts and Sciences Dean’s Medal. She was selected to receive the Dean’s Medal as one of the outstanding students who has demonstrated an unyielding commitment to academic excellence during her time at ASU.

She had some obstacles along the way though.

Originally, she had planned to apply as a journalism major at ASU’s Walter Cronkite School of Journalism and Mass Communication, but an adviser told her that she feared that Rajnisz would not live up to the potential of others at the Cronkite School.

Also, Rajnisz had  lived in the shadow of her older sister, having been told so many times that she was "not good enough" because her sister was better.

The night before she applied to ASU, Rajnisz talked to her mom about the pressure she was feeling and how hard it was for her to feel like her own person when she had been in a shadow her whole life. She remembers her mom telling her that she wished her siblings would communicate as openly and honestly as Rajnisz did. That's when she knew she wanted to study human communication.

“The lightbulb over my head went off and the next morning, I applied for a BA in communication in the Hugh Downs School of Communication,” she said.

The best piece of advice that she would give to anyone still in college would be to challenge those that doubt you, even if that means challenging yourself.

“Never in a million years did I think I would ever be the recipient of the Dean’s Medal,” she said. “What got me to where I am today was all of the doubt others had in me. Instead of letting it defeat me, I bought a carton of ice cream and let the negativity motivate me,” Rajnisz said. “The endless 'no's' lit a fire. It didn't matter how many 'no's' there were as long as I got the one 'yes' that outweighed everything else. “

Coming to ASU as a transfer student was also challenge for Rajnisz. Not knowing a single person and feeling incredibly nervous, she attended Passport to ASU with her dad by her side for support.

The pink Sun Devils Wear Prada booth immediately caught her eye and she was greeted by friendly faces.

“It was almost an overwhelming feeling that I had been accepted by a group of genuinely nice girls,” she said. “They welcomed me with open arms and now I have lifelong friends.”

Rajnisz said she has learned two important concepts while at ASU: that her instructors only cared as much as she did and that it was okay to seek support.

Previously, Rajnisz said she had always been timid to ask for help or make her presence known in class. 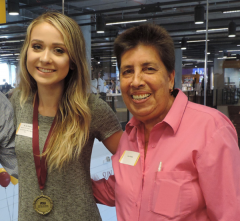 But she decided that to start anew, she would build a good rapport with instructors and advisers like Carol Comito (pictured at left).

She began introducing herself to every instructor the first day of class and would offer to help them in any way she could; feedback, notes, etc. She asked questions and challenged conversations.

“Slowly, I began to realize I was communicating more than ever and I loved it. I felt support from my instructors because I had opened lines of communication,” she said. “I can confidently say the faculty who knew me truly cared, because they saw that I did too. I was invested in my success. “

Rajnisz had also quietly battled anxiety since middle school and never gave it the attention it deserved. When she arrived at ASU, she sought out counseling and went once a month, every month.

“I credit a lot of my success to those who took the time to sit with me and simply listen,” she said. “I live with anxiety and it has taught me a lot about myself. It has challenged me and I am stronger because of it.”

Rajnisz has a long history of volunteering while a student at ASU. She has been a stylist for Sun Devils Wear Prada since 2015; she volunteered to help oversee the Tempe Festival of the Arts; and she volunteered at Maggie’s Place, which provides pregnant women in need with resources and a supportive community. She is also bilingual in English and American Sign Language.

Between her volunteer work, rigorous coursework, living in student housing, working with different groups, and working in the food service industry, Rajnisz also found her patience tested at ASU. But she now takes all of those experiences to help her interact with people and guests in her current job with patience and understanding.

“As silly as it may seem, the whole premise of this discipline at the end of the day, is to have a better understanding of how we as humans interact with one another,” she said. “Little did I know — although I was constantly challenged academically — everything I learned was very much applicable to my daily life.”