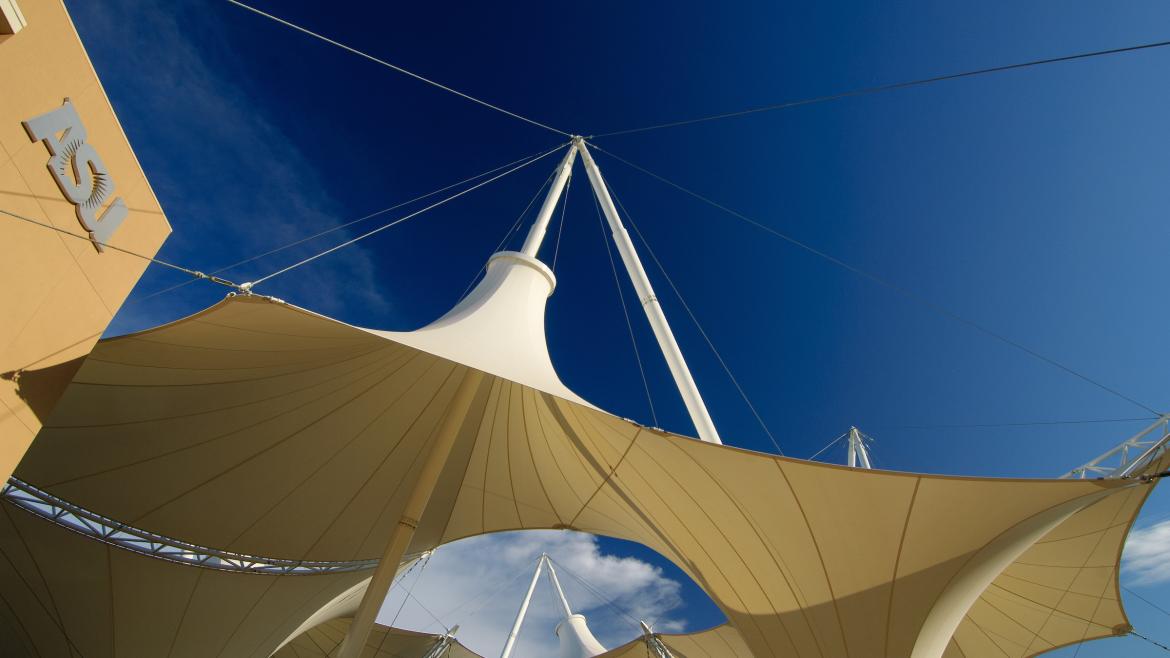 ASU innovation makes it one of the top universities for patents worldwide.
June 6, 2017

62 patents move university to 30th spot, underscoring ASU's commitment to innovation and having impact on society

Arizona State University engineer Tom Sugar’s wearable robotics enhance human performance or help people overcome disabilities. One reason they’re successful is that they work with the user, not against them.

“We watch the motion of the user and use that motion to make adjustments to exoskeletons or wearable robots or that type of thing,” Sugar said.

His method for achieving this, “Systems and Methods for Adding or Subtracting Energy to Body Motion,” is now a set of exclusive rights granted to him and the university by the U.S. government, one of 62 patents granted in 2016 to ASU.

Arizona Technology Enterprises is the intellectual property management and tech transfer organization for ASU. Simply put, it shepherds applicants through the complicated process to license ideas.

Ken Polasko, executive director of AzTE, said the university’s faculty, leadership and increase in spending are all contributing to the jump.

“There’s a number of factors that are responsible for this increase in patents and moving up in the ranking,” Polasko said. “One reason is that it’s a direct result of ASU’s faculty research and their desire to get their innovation into the marketplace. It’s really due to their work and their desire to do the additional work to file for a patent.

“The other point is this is happening because of the leadership here at ASU, all the way from President Crow to the deans and chairs. The third component in this is the growth of the ASU research enterprise. Research expenditures have increased significantly.”

The new rankings underscore the university’s efforts to ease the process for acquiring patents.

“ASU has a good process,” Sugar said. “They are encouraging faculty members to innovate. ... It’s not easy. A lot of faculty members don’t realize it’s a strenuous process.”

Applicants file a provisional patent, then work through the details. When that’s approved, they have a year to file the full application. Typically it takes two to three years to become accepted.

“You have to basically go back and forth with the patent examiner,” Sugar said. “They’re trying to decide whether the claims are valid and you’re trying to prove they are valid.”

The new rankings are a reflection of the university’s commitment to having an impact on society.

“ASU’s jump in the patent rankings shows that the innovation occurring across the university is the direct outcome of our commitment to impact,” said Sethuraman Panchanathan, executive vice president of Knowledge Enterprise Development and chief research and innovation officer at ASU. “We will continue to advance use-inspired research that positively shapes and contributes to the communities around us. It is a mission that drives and inspires us.”

If necessity is the mother of invention, Arizona State University is a hotbed of midwifery.The university celebrated opening a chapter of the National Academy of Inventors by honoring the 101 faculty and researchers who have earned patents or had their technology licensed by ASU.Of the top 100 universities in the world for patents, ASU ranks 38th.“What it is all about at the end of the day when ... 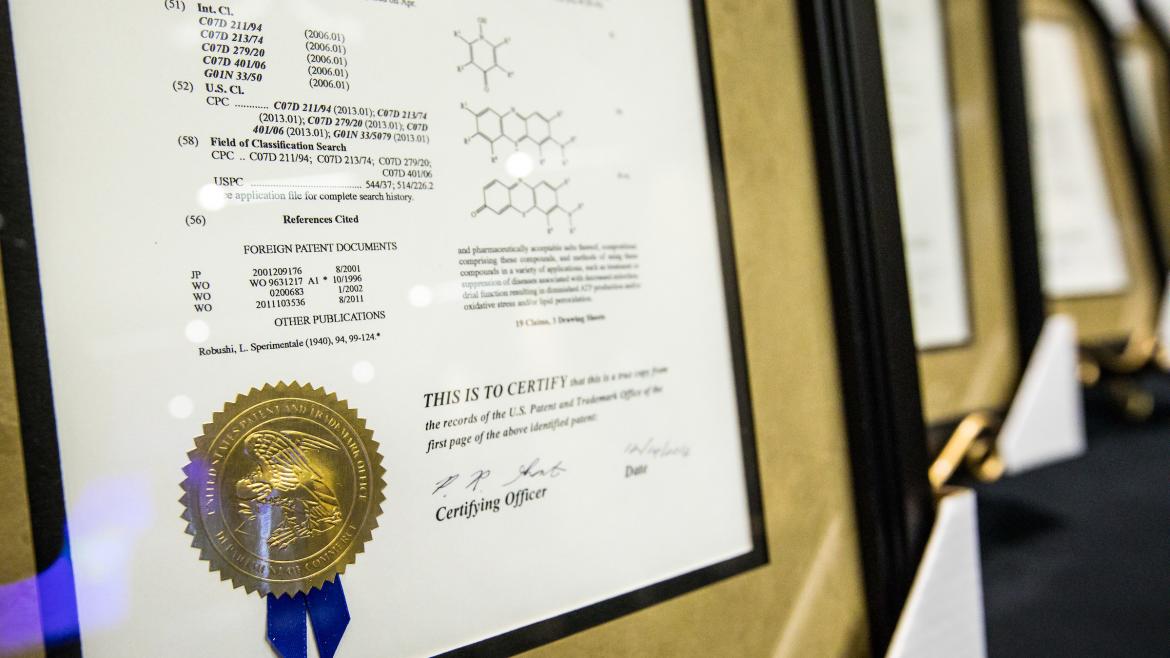 If necessity is the mother of invention, Arizona State University is a hotbed of midwifery.

The university celebrated opening a chapter of the National Academy of Inventors by honoring the 101 faculty and researchers who have earned patents or had their technology licensed by ASU.

Of the top 100 universities in the world for patents, ASU ranks 38th.

“What it is all about at the end of the day when we talk about these kinds of rankings, it is truly a reflection of the spirit that is exemplified at ASU, which is primarily defined by what all of you are doing to advance this university,” Sethuraman Panchanathan, executive vice president of the ASU Knowledge Enterprise and chief research and innovation officer, told the ASU faculty and researchers at the celebration.

Before 2003, ASU had seven startups. Now there are more than 100, said Kenneth Polasko, executive director of Arizona Technology Enterprises.

Founded in 2003, the organization is a technology transfer office that has launched 100 companies based on ASU innovations. Fields of invention have ranged from energy and construction to diagnostics, materials and environmental innovations.

“These have really had an impact on the state of Arizona,” Polasko said. “I think that’s not well-known in our community or the academic community. When we went back and looked at the economic impact, those 100 companies ... have attracted over $650 million in investment.”

That’s money that mostly stays in Arizona, paying salaries to the estimated 500 employees those startups have hired, then trickling down to real estate and local businesses.

“Again, a very good economic development story,” Polasko said. “This is a celebration of the economic impact you are having. ... You are the superstars of this activity.”

Thirty-four people with six or more patents were honored at the celebration Thursday.

“This is a tremendous achievement, because if you look at the overall size of the faculty at ASU, this is a huge percentage of the faculty who are participating in this activity,” Panchanathan said.

Having a university chapter of the National Academy of InventorsSometimes called the academic wing of the U.S. Patent and Trademark Office, the organization promotes academic innovation. More than 210 universities belong to NAI. “changes the culture,” said academy founder and president Paul Sanberg.

“We want to change the academic culture,” said Sanberg, who has been issued 111 patents. “That was the main reason we started. How many people have gotten their first patent and other people in the department went, ‘Oh well — so what? You just want to be a millionaire. You’re not doing pure academics.’ That’s a story many of us have encountered. ...  That is a story we want to change.” 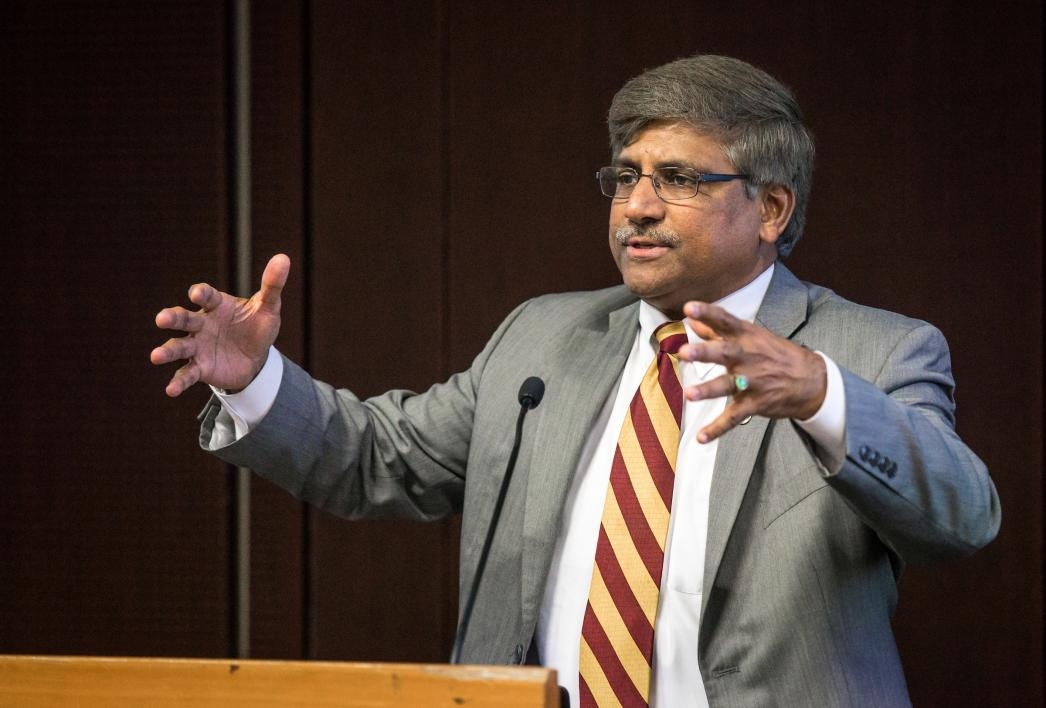 Sethuraman Panchanathan, executive vice president of the ASU Knowledge Enterprise and chief research and innovation officer, speaks at the Celebration of Invention luncheon at the Memorial Union on Thursday about the spirit of innovation at ASU, exemplified by the work done by its faculty and researchers. 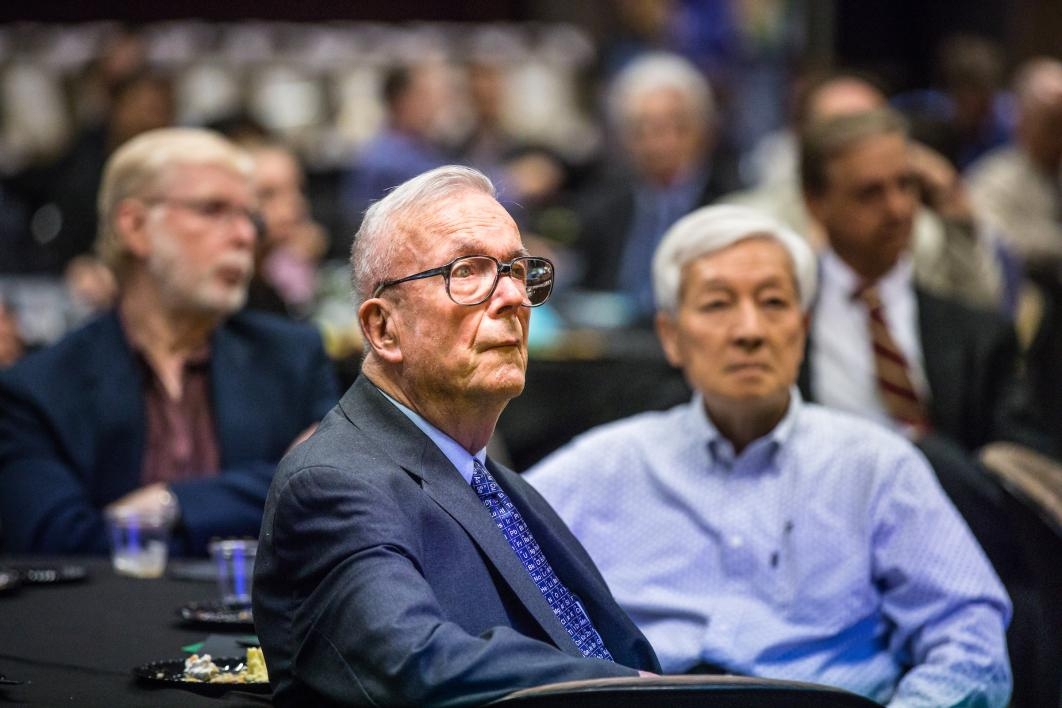 Regents' Professor G.R. 'Bob' Pettit, with more than 80 patents, is among the faculty and researchers honored at the luncheon — 101 individuals have earned patents or had their technology licensed by ASU. Kenneth Polasko, executive director of Arizona Technology Enterprises, spoke about the economic impact that ASU startups have had on the state. He highlighted the more than $650 million they have attracted in investment, money that mostly stays in Arizona, paying salaries to the estimated 500 employees those startups have hired, then trickling down to real estate and local businesses. 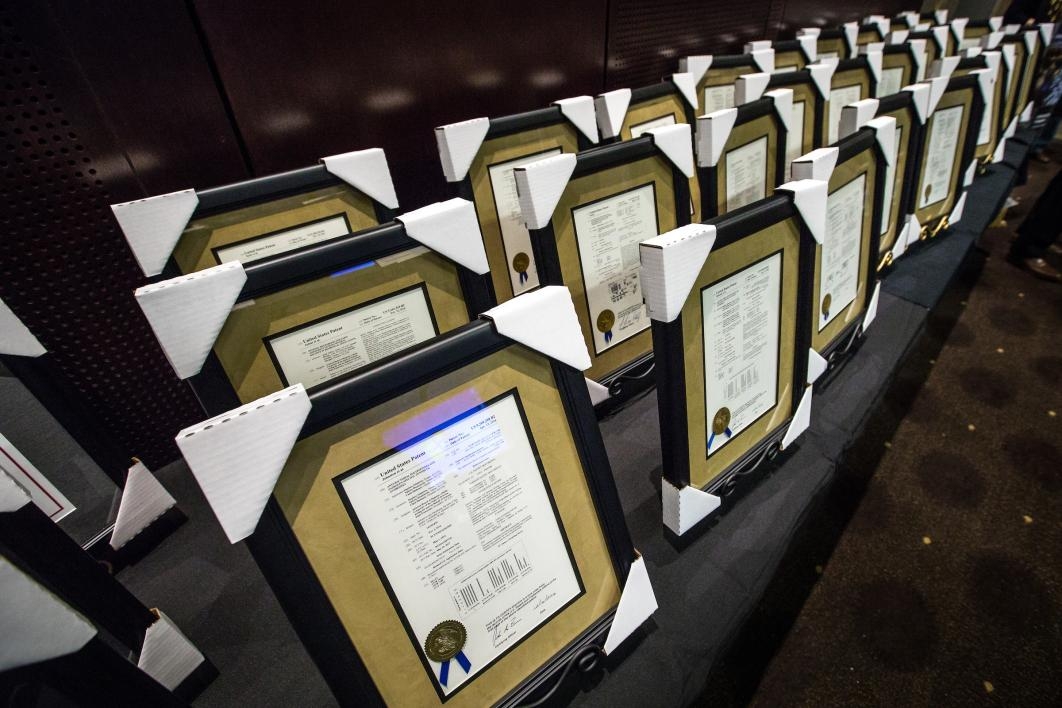 More than 100 patents from the past year are on display at the Celebration of Invention luncheon. 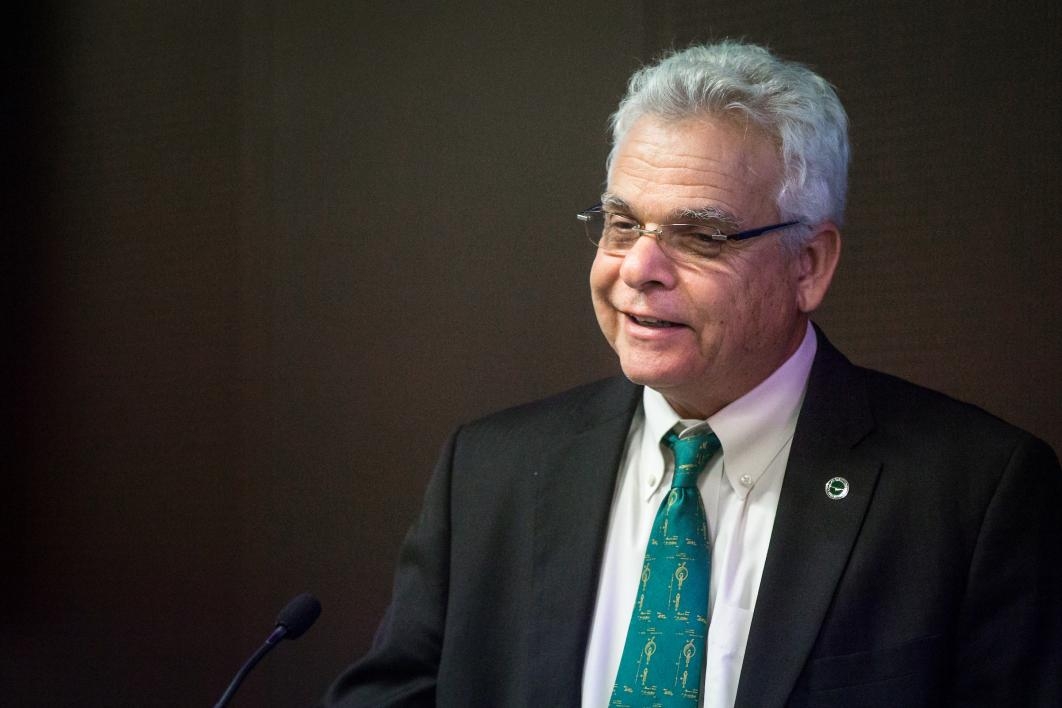 Top photo: One of more than 100 patents on display at the Celebration of Invention luncheon in Tempe. Photo by Charlie Leight/ASU Now