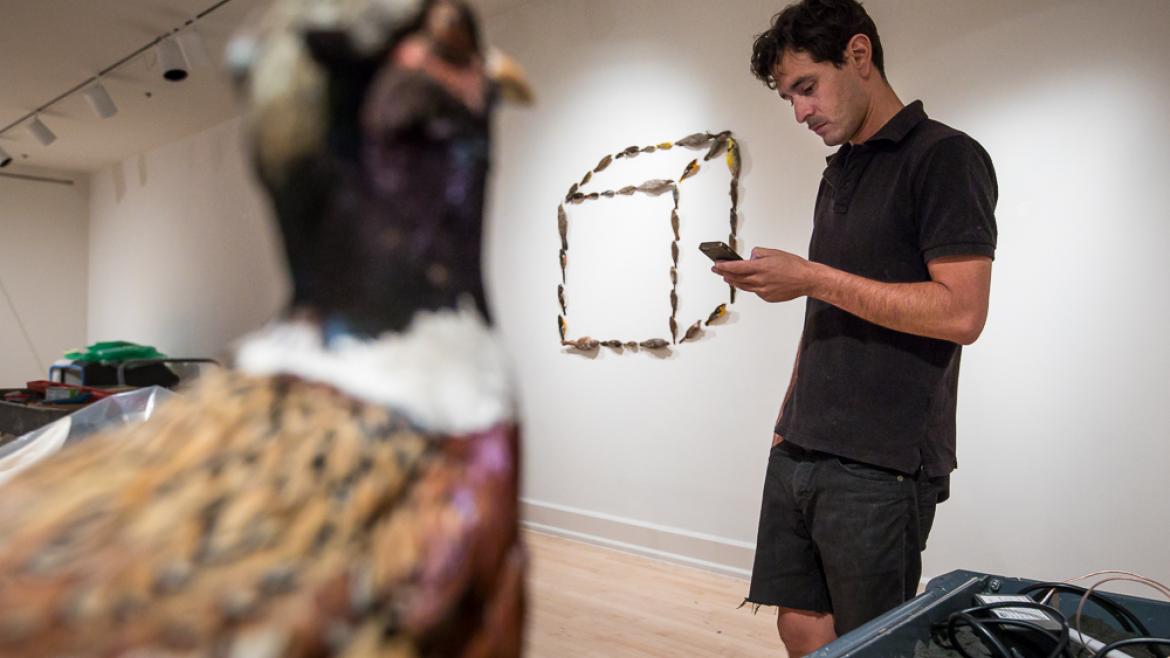 This time it says art.

“An illusion to create all kinds of possibilities.”

The 36-year-old artist has created many illusions and possibilities in his new show, “DEAD, DEAD, LIVE, DEAD,” which will open June 10 and remain up through Sept. 2.

An opening reception will be held from 4 to 6 p.m. Thursday, June 1, with Rico present. The event is free and open to the public.

For Rico’s first museum exhibition in the United States, he has borrowed objects from ASU’s Life Sciences program to create a one-of-a-kind installation. He uses materials such as taxidermy animals, bones, pelts, neon, projection, ceramic plates and other objects to address the relationship between nature, architecture and the future ruins of civilization.

It sounds a bit esoteric, but there’s also lots of humor and absurdity in Rico’s work. Don’t be surprised if you see an entranced fox sitting and staring at a hole in the wall, a formation of small birds outlining a 3-D box or a fowl clutching fruit above a Coke bottle.

“It’s playful and it’s fun, but there’s a lot of surrealism and still-life influences from the 16th and 17th centuries in his work,” said Julio Cesar Morales, ASU Art Museum curator. “He’s one of the best artists of his generation coming out of Mexico.” 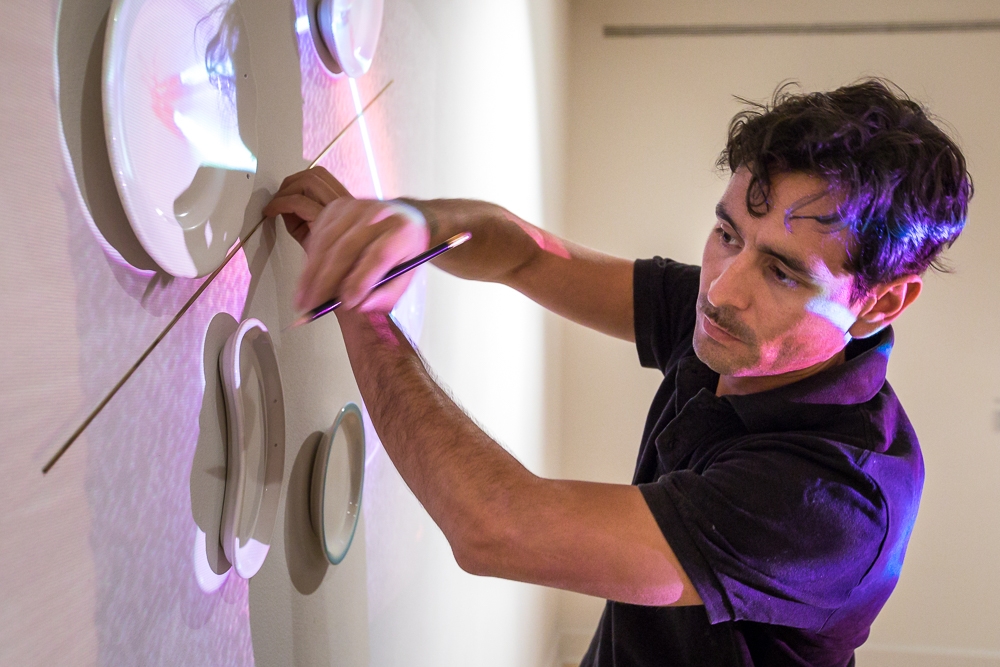 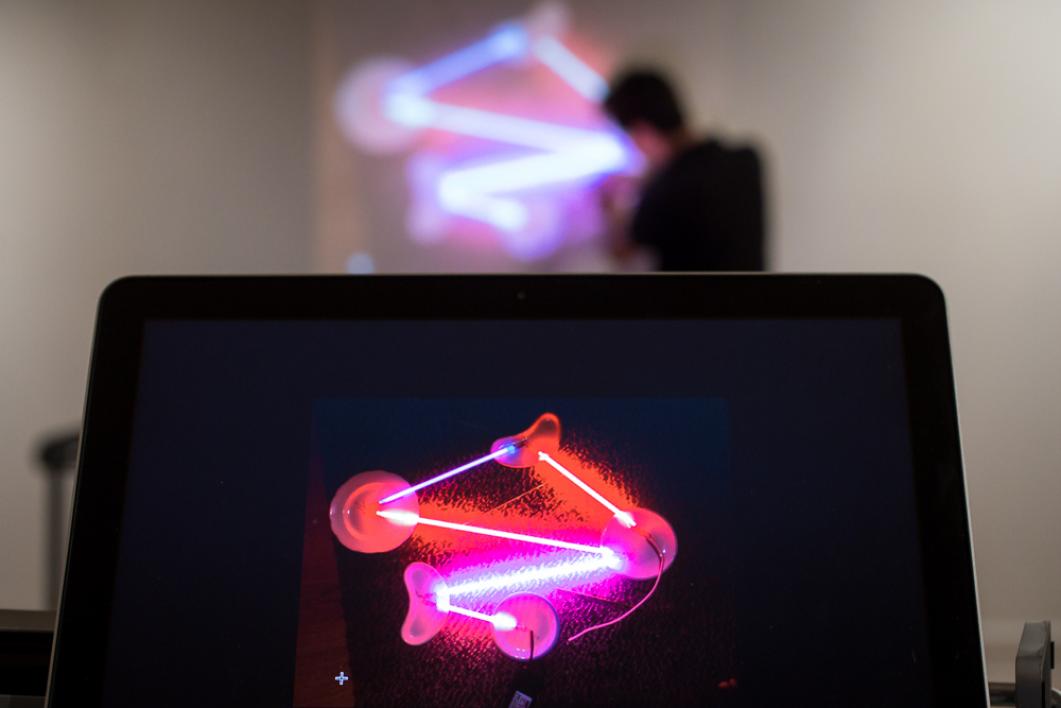 Rico uses a photograph on his computer as a template projected on the wall as he installs his multi-media piece "6:32 PM." The title refers to the sunset light the 16th- and 17th-century artists used in their paintings. "DEAD, DEAD, LIVE, DEAD" will run through Sept. 2. A dolphin skull is on exhibit as part of the "DEAD, DEAD, LIVE, DEAD" exhibition. Rico is using creatures from the collection of the Life Sciences Center on the Tempe campus.

Rico is visiting the Valley as part of an international artist residency and cultural exchange between the cities of Phoenix and Guadalajara, Jalisco, organized by the ASU Art Museum, the CALA AllianceCALA stands for Celebacion Artistica de las Americas, and is a non-profit organization that creates shared arts experiences that encourage cultural understanding between people of the Americas. and Programa Annual de Open Studios in Mexico.

The goal is to provide opportunities for artists to grow their creative practice, experiment with new approaches and create a dialogue between Phoenix and Guadalajara to foster deeper cultural and artistic knowledge, according to CALA Alliance Curator Casandra Hernandez.

“There are many parallels between the cities and arts communities of Guadalajara and Phoenix,” Hernandez said. “Both cities are thriving, growing and culture flows out of these two places.”

She added that both cities are sometimes ignored in favor of their larger metropolitan counterparts — Mexico City and Los Angeles — despite the fact that Guadalajara and Phoenix boast thriving arts and culture scenes.

In conjuction with his installation, Rico will also present “Muero Vivo” at 6 p.m. June 1 at the ASU Art Museum Project Space in downtown Phoenix. For that exhibit, Rico selected insects from ASU’s Hasbrouck Insect Collection to be displayed with his sculpture and video work. Phoenix-based artist Estrella Payton is one of the first participants in GDL-PHX Residencias Artisticas, a residency program between the cities of Phoenix and Guadalajara, Jalisco. She will head to Guadalajara on June 25 to begin her five-week residency.

Three weeks after Rico’s two exhibitions open to the public, Phoenix-based artist Estrella Payton will be headed to Guadalajara on June 25 to begin her five-week residency as part of the GDL-PHX Residencias Artisticas program.

“I’m looking forward to immersing myself in the city’s colonial history and seeing how that will influence and develop my work,” said Payton, an interdisciplinary artist who explores the use of building materials, constructed spaces, movement, map-making, text and collage.

“I’m going to make as much of the experience as I can.”

Top photo: Artist-in-residence Gabriel Rico looks at pictures on his phone for reference as he installs his show “DEAD, DEAD, LIVE, DEAD,” at the ASU Art Museum on May 25. Rico’s exhibit mimics realistic still-life paintings from the 16th and 17th centuries. He is has borrowed objects from ASU’s Life Sciences program such as taxidermy animals and bones. No animals were harmed for the exhibit. Photo by Charlie Leight/ASU Now

Arizona State University has received new support from the prestigious Alfred P. Sloan Foundation and NASA for its rising research stars to study the microbiome of the built environment on board the International Space Station (ISS).ASU Biodesign Institute postdoctoral researcher Jiseon Yang was just one of five scientists chosen from across the country for a fellowship award from the Alfred P. Sl...

Jiseon Yang was 1 of 5 scientists in the US chosen for a fellowship award from the Alfred P. Sloan Foundation under a joint call with NASA

Arizona State University has received new support from the prestigious Alfred P. Sloan Foundation and NASA for its rising research stars to study the microbiome of the built environment on board the International Space Station (ISS).

ASU Biodesign Institute postdoctoral researcher Jiseon Yang was just one of five scientists chosen from across the country for a fellowship award from the Alfred P. Sloan Foundation under a joint call with NASA – “Microbes of the Built Environment (MoBE) Program” of the ISS. Her research will advance our knowledge and understanding of human-built habitats on Earth, enhance ISS utilization, and inform the intelligent design of future space exploration vehicles that are occupied by humans. 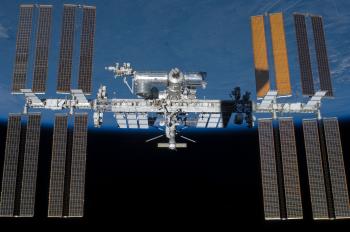 ASU Biodesign Institute postdoctoral researcher Jiseon Yang was just one of five scientists chosen from across the country for a fellowship award from the Alfred P. Sloan Foundation under a joint call with NASA – “Microbes of the Built Environment (MoBE) Program” of the International Space Station. Download Full Image

“We are very proud of Jiseon’s achievements and honored by her new postdoctoral fellowship and generous support from the Alfred P. Sloan Foundation and NASA,” said Cheryl Nickerson, Yang’s postdoctoral mentor. “When humans travel beyond Earth’s orbit again, it is critical that we understand the health risks associated with the interactions between microbes, humans and their spacecraft in the unique environment of space.”

When fully implemented, Yang’s award is part of five national fellowships that will have a total value of about $700,000 during a two-year period.

NASA and the Sloan Foundation solicited applications through parallel research announcements for post-doctoral fellowships from early career scientists to design experiments that use a NASA collection of microbial isolates collected from the ISS over more than a decade in order to better understand how microbial communities colonize, adapt and evolve in this unique environment.

As part of her fellowship, Yang will explore the impact of thin, slimy films of microbial colonies, called biofilms, that have been found to adhere to interior surfaces of the ISS, including the inside of the water lines from which astronauts get their water for drinking, eating and hygiene. This is problematic, as biofilms are a major cause of infectious disease and also cause damage to the integrity of structural materials of spacecraft.

Biofilms can form on any surface (think of the most common reason for a trip to the dentist’s office, the yellow plaque that forms on our teeth) and are notoriously difficult to remove. Yang will take advantage of a variety of microbial samples collected from the ISS drinking water system over several years to better understand and model how these different microbial communities interact, form biofilms and alter their susceptibility to disinfectants.

Besides the potential to mitigate human health and infectious disease risks associated with biofilm formation during long-term space flight, Yang’s research is also critical to controlling biofilms that can foul or corrode spaceflight systems — all of which can impact mission success.

The overall goals of these funded research fellowships are to examine how the space flight environment influences genetic and functional changes in microbial isolates collected from the ISS which may alter their virulence (ability to cause disease), resistance to antimicrobial agents, and biocorrosion of materials. 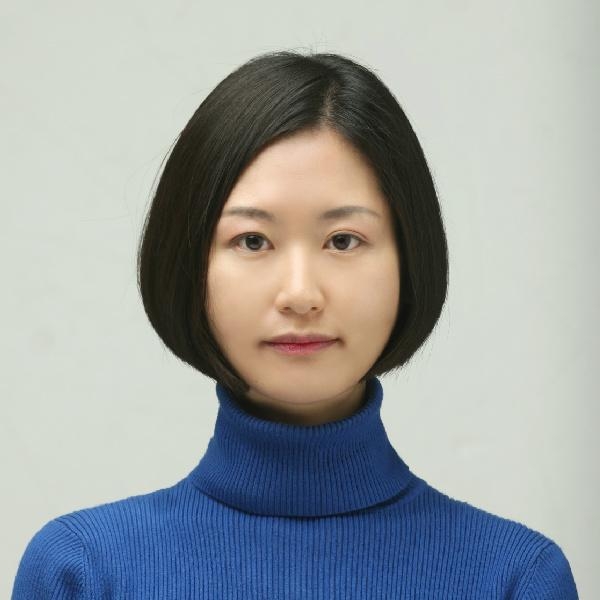 Yang's research will advance our knowledge and understanding of human-built habitats on Earth, enhance ISS utilization, and inform the intelligent design of future space exploration vehicles that are occupied by humans. Fungus growing on a panel aboard the ISS where exercise clothes were hung to dry. Experiments funded through the MoBE solicitations will study microbes isolated from such surfaces to help us understand better how microbial communities colonize, adapt, and evolve on the ISS, as well as on built environments here on Earth.

NASA and the Sloan Foundation agreed through a Space Act Agreement to work in parallel for a common purpose: to better understand how microbial communities colonize, adapt, and evolve on the ISS. Both entities have a shared interest in promoting microbiology research that will enhance scientific understanding of the microbiome of built environments.

“The proposed studies offer a powerful approach to advance our understanding of microbial population dynamics, biofilm formation and susceptibility to chemical disinfectants that may be occurring in the ISS drinking water system over time,” Yang said.  “In addition, understanding the microbiome of the ISS also provides a foundation to understand the impact of environmental factors on Earth as they influence complex microbial ecosystems of human built and occupied environments, like office buildings and hospitals.”

For a complete list of the selected proposals, principal investigators and organizations, visit: https://www.nasa.gov/.

The Space Biology Program is managed by the Space Life and Physical Sciences Research and Applications Division in NASA's Human Exploration and Operations Mission Directorate at the agency's headquarters in Washington, DC.

The Microbiology of the Built Environment (MoBE) Program is managed by the Alfred P. Sloan Foundation, a charitable foundation based in New York City that supports research in science, technology, and economics. 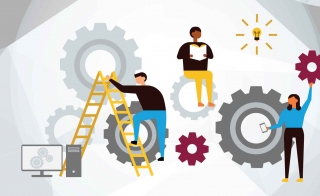