Lekelia “Kiki” Jenkins is known for pioneering a new field of study around the invention and adoption of marine conservation technology. An assistant professor in the School for the Future of Innovation in Society, Jenkins has earned fellowships from the American Association for the Advancement of Science, the Ford Foundation, and the David H. Smith Conservation Research Fellowship Program.

Her pioneering spirit has just earned her another award for her research — this time from the International Sea Turtle Society for her work on science dance. 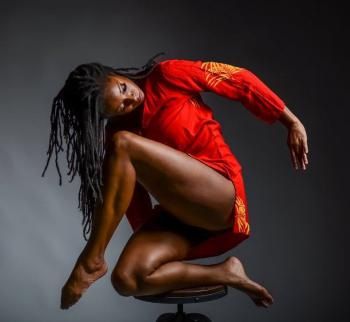 Kiki Jenkins, assistant professor in the School for the Future of Innovation in Society. Photo by Daniel Suchman Download Full Image

Science dance is a little known performance art form in which participants attempt to communicate key aspects of technical research through body movement. Those who are aware of science dance may have first learned about it through the AAAS Dance Your PhD competition, the largest and most visible event of its kind, which began in 2008.

Her unique approach to research communication hit some initial roadblocks early on. When she began dancing during college and graduate school, some viewed her activity unfavorably.  After becoming an assistant professor at her former university, she helped form a science-art collective to foster growth of the science-art in the university community. For Jenkins it was an opportunity to combine her work and dance.

“I had written a science-art grant for the collective and that seemed to be a step too far,” she said. Jenkins was encouraged to support the group at a distance.

Science dance has been gaining recognition in recent years, however. Higher participation and online voting at new competitions like the ISTS's, along with a National Academy of Sciences study on science-art, are all signs that science dance is becoming more visible.

“It has been expanding significantly, but I think the culture around it is not transforming as quickly,” she said. “Particularly in academia, it’s still perceived as a curiosity.”

ASU is different, she said. “I can do science-dance here as scholarship,” she said. “It’s accepted and supported.”

Jenkins is developing her own methodological contributions to science dance, building in part on the work of 2002 MacArthur Genius award-winning choreographer Liz Lerman, now a professor in ASU’s School of Film, Dance, and Theatre.

For the recent ISTS competition, Jenkins formed her dancers into two groups. The principals all read one of Jenkins’ scientific papers and chose to represent one of its four major findings. In rehearsal, they explained their choices and Jenkins was happy to hear them making connections, both scholarly and personal, that she would never have expected.

The second group received a mini-lecture about the topic and created their own movements within a predetermined improvisational structure. Weeks later, Jenkins saw interesting results.

“The participants had retained the information and shared it with colleagues who did nothing related to my work — one of whom came back to me with those same terms and ideas,” she said. “That’s what I was most excited about with this dance and the process we used — how it transformed the people who participated and then their network of people.”

Jenkins and Benjamin Sodenkamp, the coordinator of her Dance Impacts! project, are busy with future dance projects. They are planning another participatory science dance for an event in October. In May, they took second in the US Zouk Open Competition (a form of contemporary social dance) in the semi-professional division and are now transforming the dance into a showpiece.

Meanwhile, they are writing grant proposals to explore how they can expand the use of dance in informal STEM education and social change.

“We want to make this transition from it being seen as just a novelty to something that’s seen as a tool,” she said.

For the time being, science dance is still coming into its own, but Jenkins sees that as an advantage.

“For now, most people who do science dances in the world are doing it for the first time,” she said. “It’s a new experience for them, and that can be really pivotal for change and innovation and science, in and of itself.”

ASU engineering students build a car and skills with chemistry

ASU engineering students build a car and skills with chemistry 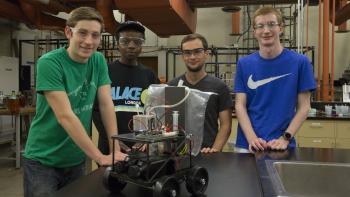 The Chem-E-Car competition, led by the American Institute of Chemical Engineers, challenges college students to design and build a model car powered by a chemical energy source.

The ASU Chem-E-Car team’s car is powered with a fuel cell that runs on hydrogen gas and oxygen to create water and a current for a consistent chemical reaction to drive the car forward.

The team placed second in the 2017 AIChE Rocky Mountain Regional Conference competition in March, securing them a spot at the national tournament in Minnesota this November.

Dopilka and Langdon competed in the 2016 Chem-E-Car competition with a fuel cell car based on the successful 2012 ASU Chem-E-Car team’s design. Though they didn’t place in 2016, they have used that experience to revitalize Fred in 2017 to successfully complete the competition’s difficult challenge.

An hour before the competition, student teams are given a specified weight the car must carry safely over a specified distance, and they must stop as close as they can to the finish line. They have two rounds to get their best score.

The team put their engineering skills to use to design a successful system. A highly accurate iodine clock, which they consider the best part of their car so far, determines the amount of time the car moves based on the amount of chemical supplied.

“We combine two solutions onboard the car, and when one chemical runs out it turns from clear to dark. A photoresistor sensor detects the change in color and it cuts the power circuit,” Langdon said.

For even more accurate results, the team designed a custom stir plate to ensure the solution is well mixed, which Langdon thinks helped make theirs the best stopping mechanism demonstrated at regionals.

They also follow the “measure twice, cut once” philosophy — taking measurements at ASU and in the competition preparation time to ensure accuracy, something they didn’t see other teams doing.

Torres sees a lot of potential in this team as they’ve refined Fred over the last two years, though he knows national competitions are tough and require a lot of practice.

“Having seen a few national competitions, I know the top places are decided by inches from the finish and this requires extensive testing of the car,” Torres said. “Their success is highly dependent on how much time they can put into testing.”

Until 2016, the Chem-E-Car team was part of the Controlled Propulsion special topics course that Torres has been running since 2011, but was far from a typical class experience.

Torres designed the course to be an independent learning experience — from designing the chemical reaction to setting up team meetings, assigning tasks and buying supplies. This challenges team members to use much more than technical skills to succeed.

“There’s a structure in labs, but here we’re just making it up as we go,” Dopilka said. “No one is telling us what to do or what to look for.”

The Chem-E-Car team is now part of the AIChE club where it continues to challenge Fulton Schools students.

It’s a rewarding experience when they get it right after all their hard work, and a great way to show how they’ve applied their classroom skills.

“You don’t get this learning experience in the classroom or labs,” Langdon said. “You’re forced to use things you’ve learned in an actual applied setting.”

“It is an opportunity to put all their knowledge together into a specific design problem,” Torres said. “It also helps them develop their leadership skills and their ability to work in teams that coalesce into a successful design.”

Preparing a formula for nationals and beyond

They’ll be further optimizing the design of the various components of the car and trying out alternative designs using batteries over the summer.

No matter how they place, the team is looking forward to meeting other chemical engineering students from across the country and even around the world, one of their favorite parts of the regional tournament.

They also hope to have more Fulton Schools students join their small team, especially with Langdon and Dopilka beginning graduate studies at ASU in the fall.

Torres is confident that students will seek out this opportunity out of an interest in accomplishing the Chem-E-Car challenge.

Langdon said it’s a fun experience to use skills learned in the classroom on something other than homework, and emphasizes that the technical and project management skills gained are valuable to employers.

“We hope that our success inspires more students to join and make a tradition of success here at ASU,” Langdon said. “We’ve got a big program with a lot of smart people, and we hope the younger classes set out to prove that.”