Shangning Wang, a Master of Visual Communication Design student in The Design School, has received multiple awards for his poster "Self-portrait." This work earned Wang the American Advertising Federation District 12 Student ADDY Gold Award, and he is a finalist for the National American Advertising Awards. This poster also earned Wang honorable mention for the eighth International Design Awards and the Student Silver Award in the Phoenix ADDY Awards. "Self-portrait" has been selected for the 2015 Asian Next Poster Experimental Design Invitation Exhibition.

"I sketched seven designers and one innovator whom I admire a lot then arranged them chronologically," Wang says of the work. "All these designers have inﬂuenced me a lot. The bigger one is my self-portrait, composed of my works and my face. This mind map shows the connections between my works and theirs." 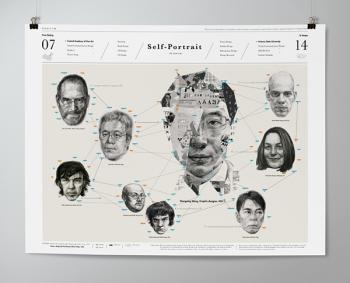 After four years of winning research and academic awards, senior Ryan Muller is graduating with his dream in sight: pursuing synthetic biology as a graduate student.

After four years of winning research and academic awards, senior Ryan Muller is graduating with his dream in sight: pursuing synthetic biology as a graduate student. Muller is finishing his four years at Arizona State University with a double major in molecular bioscience and biotechnology, and medicinal biochemistry. 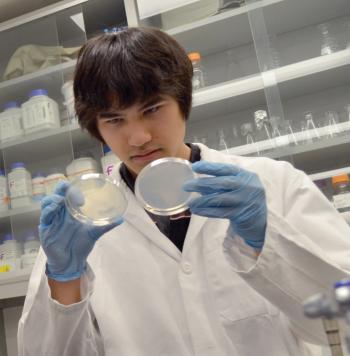 Muller received offers from University of California Berkeley, as well as from Harvard – creating a difficult choice. But after spending a summer at Berkeley as a part of the Amgen Scholars research program, he said he felt the environment at Berkeley would be more productive to his success.

Coincidentally, a summer research program is what led Muller to ASU in the first place. During high school, he conducted research at the Biodesign Institute and realized ASU was the university for him.

“I saw all the really good research going on at ASU and wanted to be a part of it,” Muller said.

During his sophomore year, Muller joined the ASU International Genetically Engineered Machine (iGEM) team, which competes on a national level to create synthetic biological systems. In 2012, his team won a gold medal, as well as the Best Human Practices Advance award during the international championship

“Being on the iGEM team was very pivotal in cementing my belief that research is what I want to do and that I’m good at it,” Muller said. “There were a lot of late nights in the lab, but it showed me that no matter the challenge, I’m able to get through it.”

Muller said it often took more work than people realized. Citing one time when the team was lacking enough data for the project, he spent more than 70 hours in the lab with one other student to make up for the shortage – completing the task in addition to his other research and academic duties.

In 2014, Muller was one of 300 students nationwide who received a Goldwater Scholarship for his academic excellence. This year, he earned the School of Life Sciences Outstanding Graduate award, and the College of Liberal Arts and Sciences Dean’s medal for the Department of Chemistry and Biochemistry.

More than any other experience, Muller said he appreciates the way both the School of Life Sciences and the Department of Chemistry and Biochemistry supported his research efforts. In particular, a biosensor project that evolved from his experience on the iGEM team stood out in his mind.

“ASU was very willing to give me all the resources I needed, which was very exciting,” Muller said. “I was able to have my own independent ideas and develop projects purely from my mind into a physical entity.”