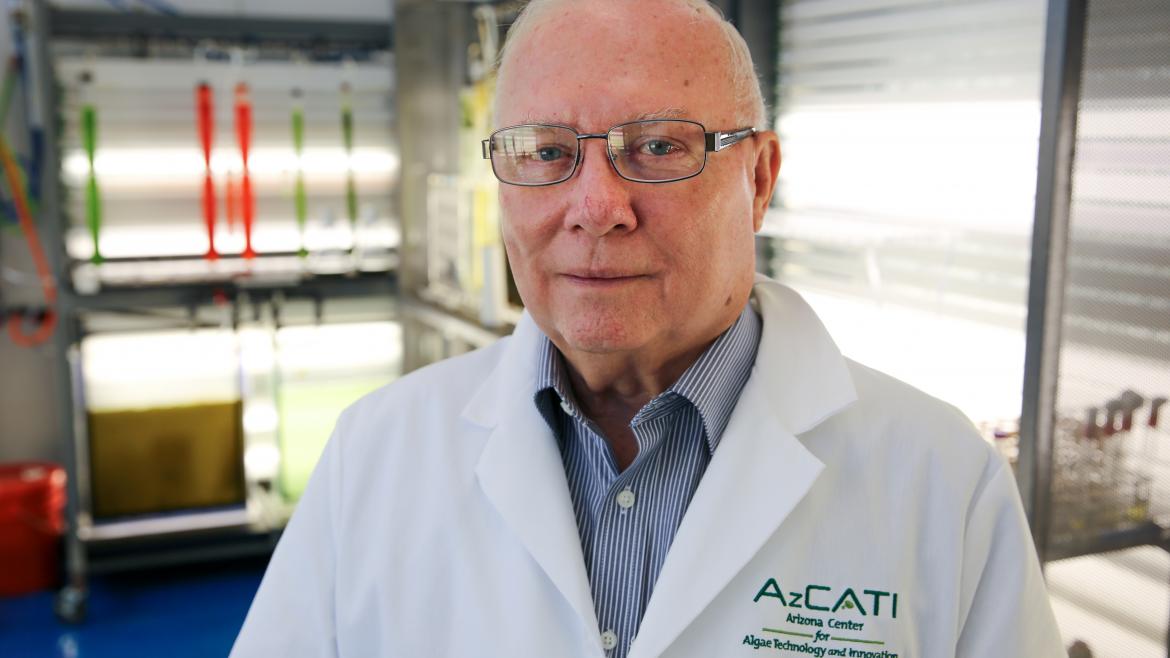 Editor's note: Milton Sommerfeld, a professor at Arizona State University's Department of Applied Biological Sciences at the Polytechnic School, died on May 16. He was 76. Here, his life and work are remembered.

What’s so great about algae?

If you had the good fortune to meet Milton Sommerfeld, you have a hearty answer to that question.

Appropriately dubbed “The Wizard of Ooze,” Sommerfeld illuminated the world of algae with vibrant imagery, bubbling-good humor and — if you were lucky — a mouthful of algae cookie, freshly baked by his wife, Carolyn.

Sommerfeld unlocked algae’s potential, demonstrating its boundless possibility while leaving an enduring legacy of research, both at Arizona State University and well beyond its walls.

Sommerfeld grew up in rural Texas on his family’s farm. Not only did this upbringing teach Sommerfeld the importance of hard work, resilience and integrity — virtues he continually demonstrated to his students and colleagues — it also introduced him to a specific slimy-green substance.

One of his designated farm duties was cleaning the cattle trough, which reliably flaunted a shiny coat of algae. Despite giving it a good scrub every week, the algae always returned. He puzzled at how and why it grew so fast.

Sommerfeld's interest in algae was really piqued when a fellow colleague asked him to evaluate the pond scum in his pool — not uncommon in the Phoenix metro area where private pools are nearly a necessity. The colleague asked Sommerfeld to help him prevent the scum from reoccurring, and a four-decade career in algae — from biofuels and bioproducts to toxins and bioremediation — was born.

Sommerfeld enjoyed an expansive ASU career sparkling with accomplishment. During 48 years as a professor, his advancement to department chair, then to associate dean and finally to co-director of the Arizona Center for Algae Technology and Innovation (AzCATI), he kept education and research firmly at the foundation of his success.

Much of Sommerfeld's legacy lies in the inception of the Laboratory of Algae Research and Biotechnology (LARB), which later became AzCATI — a unit of ASU LightWorks, recognized as the first national test bed for outdoor algae cultivation. He was critical in developing the Algae Testbed Public Private Partnership (ATP3), now key to researchers and companies looking for third-party technology verification.

With AzCATI, Sommerfeld envisioned a place where students could gain the knowledge necessary to become tomorrow’s workforce in the expanding field of algal biotechnology, and that is precisely what it has become.

Inquisitive minds found great company in Sommerfeld, who was more than happy to entertain questions about algae. He delivered answers with such relish, even his colleagues felt like they were hearing them for the first time.

For this reason, Sommerfeld eagerly awaited ASU’s annual open house event — Night of the Open Door. He got ready by creating quizzes for kids and preparing algal product samples for other visitors.

Sommerfeld's impeccable sense of humor, replete with science jokes, made everyone’s trip to AzCATI memorable. He welcomed people from academia and industry, tirelessly giving tours to individuals and groups alike. Always using samples and examples, he made sure that everyone left with a clear understanding of why “we should all love algae.”

Sommerfeld's love for education dates back to his time as a high school teacher, his first job after obtaining his bachelor's degree in biology from Southwest Texas State College. He spent two years teaching before beginning his doctorate in plant biology at Washington University in St. Louis. He later returned to education and remained there for the rest of his career.

As co-director of AzCATI, Sommerfeld developed an internship program that allows select high school students from ASU Preparatory Academy to spend a few hours a week at the facility. Here, they shadow graduate students and technicians while gaining invaluable lab experience before college. The concept has since extended to undergraduate ASU students — many of whom become research technicians after graduating.

In fact, Sommerfeld recently worked with former students to build algae-related graduate courses and hoped to one day establish an algae major.

Sommerfeld was always a fan of Monday morning meetings. He made sure to arrive five minutes early — punctuality being an attribute he always impressed upon his students — and to kick off meetings with gusto.

His passion and motivation were palpable to all who work with him, around him, and even to those who had only heard of him — forever embedded in his contribution to the center’s “I LOVE Algae” logo.

When taking a picture, Sommerfeld was known to substitute the standard “cheese” for “algaeeee.”

That’s the snapshot that those who had the great privilege to know Sommerfeld will always remember: a brilliant scientist with a keen sense of humor and big, infectious grin that radiated his joy for doing what he loved most.

Much of what happens inside the human body at its most basic biological level is determined by how its cells transition from one state to another.In particular, stem cells — the primal cells common to all multicellular organisms— have the ability to divide and differentiate into a range of specialized kinds of cells that are essential to critical bodily systems and functions. Some cells can ev...

Much of what happens inside the human body at its most basic biological level is determined by how its cells transition from one state to another.

In particular, stem cells — the primal cells common to all multicellular organisms— have the ability to divide and differentiate into a range of specialized kinds of cells that are essential to critical bodily systems and functions. Some cells can even change to different kinds of cells more than once. 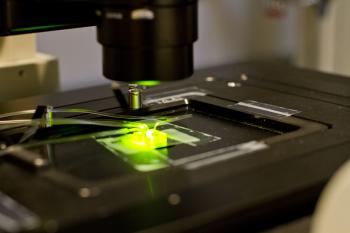 The technology used in Xiao Wang’s Systems and Synthetic Biology Lab can capture images of cellular fluorescence in microfluidic devices. The images are used to illustrate in real time how engineered E. coli cells transition from one state or function to another. Photo by Jessica Hochreiter/ASU Download Full Image

What is still unknown to a significant degree are all the factors within the body’s genetic environment that determine what kinds of specialized cells that the unspecialized stem cells will transition into.

A thorough understanding of what controls the cell differentiation process would unlock secrets to “guiding” cell fates, and open up the potential for developing more and better cell-based medical therapies, according to Xiao Wang.

Wang is an associate professor of biomedical engineering in Arizona State University’s Ira A. Fulton Schools of Engineering and directs the Systems and Synthetic Biology Lab.

HIs lab team and faculty collaborators have been trying to fill in missing pieces of the picture presented by “Waddington’s epigenetic landscape,” a visualization of pathways a cell might follow toward differentiation.

Scientist Conrad Hal Waddington’s illustration of a biological landscape of ridges and valleys that a cell could move along on its way to differentiation was a valuable step forward in genetics in the mid-20th century.

With the benefit of modern advances in mathematical modeling, computer science, bioengineering, physics and molecular biology, Wang and his colleagues have expanded on Waddington’s conceptualization of the determinants of cell fates.

Their conclusions have recently been published in the biomedical and life sciences research journal eLife, in the article “Engineering of a synthetic quadrastable gene network to approach Waddington landscape and cell fate determination.” 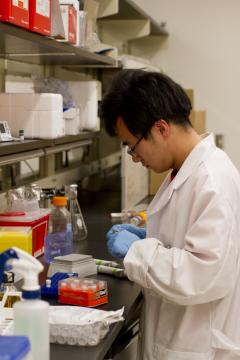 Wang’s chief partner on the project was Ying-Cheng Lai, a Fulton Schools professor of electrical, computer and energy engineering.

The eLife journal editors write that the team has successfully charted how the environment in which cell fates are altered will change in the presence of various chemicals, and that cells’ transitions can be guided by introducing certain chemicals into that landscape in specifically ordered sequences.

“Their work helps us understand how multiple cell fates may be achieved and how we might manipulate cell fate transitions,” the editors write.

The research not only lays a theoretical foundation for how cell differentiation could be controlled, Wang explained, but also provides results of experimentation to support the theory.

The upshot is that by changing the order in which mixtures of particular chemicals and protein molecules are introduced into the environment, one kind of cell can be manipulated into turning into other specific kinds of cells.

With the ability to do that, he envisions being able to someday control the mechanisms that determine cell fates for the purposes of treating infections and diseases, and repairing body tissues and organs. 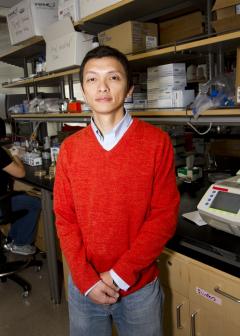 Associate Professor Xiao Wang says the most dramatic impact of learning to manipulate the cell transition process might be reducing the need for organ transplants. Photo by Jessica Hochreiter/ASU

He sees potential uses for improving therapies and treatments for Alzheimer’s disease, spinal injuries and even blindness.

The most dramatic impact could be on reducing the need for transplants.

“When tissues or organs are badly damaged, the only option we often have today are transplants. We have to take parts from other bodies,” he said. “But by turning our own cells into the kinds of cells needed to produce specific types of tissues, we might be able to generate that new tissue from our own genetic material.”

Getting to that point will take much more research and experimentation, Wang says, and he plans for his lab to pursue answers to more complex questions about activating cell differentiation and how to best take of advantage of controlling the process.

“We don’t want to over-claim about what might be achieved,” Wang said. “But what we are learning, and the possibilities it raises, is very exciting.”