Anna Beiler (pictured below), has won a College of Liberal Arts and Sciences (CLAS) Graduate Excellence Award. Beiler, whowho works in Professor Gary Moore’s lab, conducts use-inspired research to design new methods and materials for harvesting the power of the sun in the form of fuels. 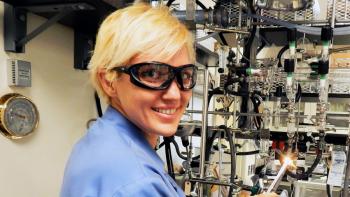 “Fuels possess a relatively large power density and are essential to modern transport systems,” Beiler said. “By integrating energy capture, conversion, and storage in a single material, land and resource needs can be minimized while converting a temporally transient energy source, the sun, into chemical fuels that can be deployed on demand.”

Beiler's thesis project is specifically focused on methods to interface molecular catalysts that can produce fuels, such as hydrogen or reduced forms of carbon dioxide, with visible-light absorbing semiconductors.

Another recipient of the CLAS Graduate Excellence Award is graduate student Shannon Hilton: “My research involves generating a new tool to find resistant pathogens immediately with very low cost,” she said. “It is based on separating antibiotic resistant and susceptible bacteria using a technique called dielectrophoresis.” 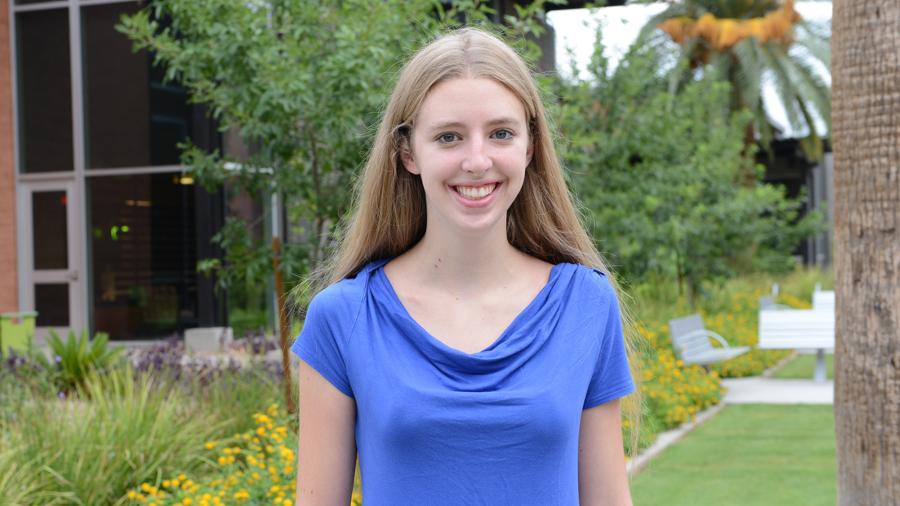 Learning if an infection is resistant to antibiotics is extremely important to help patients and control outbreaks of truly scary pathogens.

Since the use of antibiotics to fight bacterial infections began, bacterial resistance to their efficacy has been growing and is now a major problem. Hilton explained that it is improper use of antibiotics that has been a major factor in this developing resistance. Current methods to determine bacterial susceptibility to a given antibiotic take 24 hours or more. A dielectrophoretic test takes minutes, and could help lead to the correct antibiotics being administered earlier in treatment. This would have twin benefits for the patient — getting healthy faster, and growing of antibiotic resistance more slowly. Hilton's supervisor is Professor Mark Hayes. 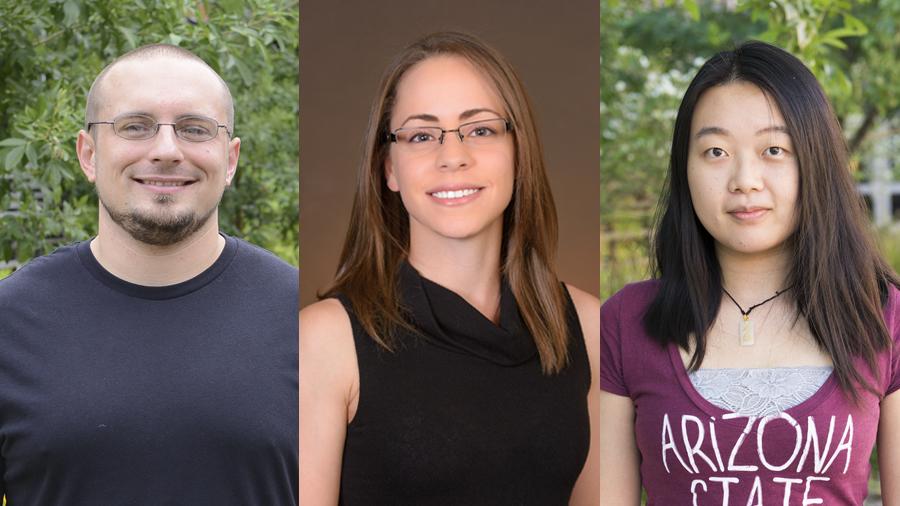 Gisriel's research aims to understand how photosynthesis may have worked before oxygen entered Earth’s atmosphere, and how it has evolved ever since.

Napolitano is studying the composition and sources of atmospheric particles and the role that fog and clouds play in the formation of secondary organic particulate matter through the analysis of natural stable isotopes. Particulate matter can affect global and local temperatures through the scattering and absorption of solar radiation, and it can be inhaled and cause respiratory stress and disease.

“I study the processes that form particles by using stable carbon isotope analysis, which can provide information on both the sources of the reaction precursors (such as plants, cars, and factories) and the kinetics of particle formation,” she said. “I have used this technique to observe the variations in biogenic and anthropogenic sources of particles in Phoenix through different seasons and in varying particle size modes. I am also studying the isotopic relationships between fog and particulate matter in samples collected in Davis and Santa Barbara, California, Whistler, British Columbia, and Strasbourg, France to better understand how the amount and composition of particulate matter is affected by the dynamic processes that occur in the presence of fog and in high relative humidity.” This work will help to improve understanding of the sources of organic compounds that have a negative effect on climate and human health.

“My research focuses on understanding the structural-electrochemical property relationships of materials for applications in energy storage,”  Zhao said. “I have studied several mineral-inspired novel polyanion compounds as cathodes and novel silicon and germanium clathrate compounds as anodes for Li-ion batteries. I have also evaluated the properties of a new NASICON type solid electrolyte material for use in Li and Na-ion cells. None of the compounds I have studied were ever investigated before, so the projects are challenging and require many insightful experiments to understand the observations.”

Beiler and  Gisriel have also won Achievement Rewards for College Students (ARCS) Foundation Fellowships. The ARCS Foundation is a national organization dedicated to supporting the best and brightest U.S. graduate and undergraduate scholars by providing financial awards in science, engineering and medical research.

Shayesteh Roshdi Ferdosi is a recipient of the CLAS Graduate Excellence Fellowship for First Generation Students. “My chemistry and biochemistry knowledge has helped me understand cancer biology to discover novel methods for tumor targeting," she said. "My research is highly interdisciplinary and in a collaborative project we bring in bioinformatic tools, medicinal chemistry, cancer biology and immunotherapy to recruit our immune system to target cells with mutations contributing to tumor progression.” 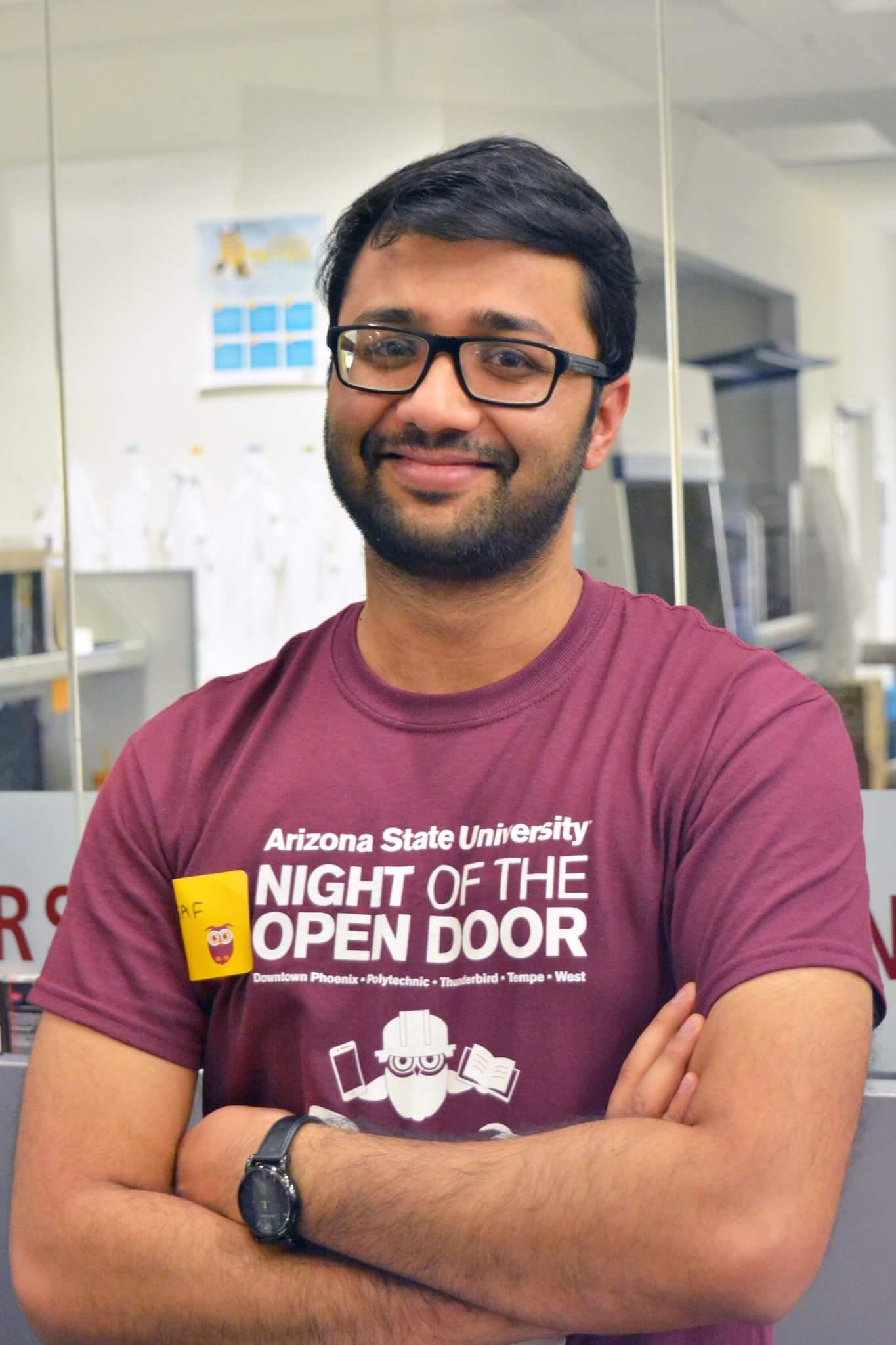 Ferdosi also received an award from the ASU Graduate and Professional Student Association (GPSA) for outstanding mentorship. GPSA is the official student government for all ASU graduate and professional students.

Ahmed Yousaf (right) has also received a GPSA outstanding mentorship award: “It was for my work with Pakistani Students Association and ASU's Prison Biology Education Program and for mentoring junior PhD students in the lab,” he said. “I work with Professor Alexander Green on solution-phase processing and applications of two-dimensional materials such as transition metal chalcogenides.”

Clair Crowther has received an award for GPSA assembly member of the year: “My award ... is for my service to the assembly and service on the external affairs committee and as the CLAS committee chairman,” said Crowther, who is also a doctoral student in professor Mark Hayes’s lab.

“Over the past year I had the opportunity to go to conferences about graduate student leadership in Stony Brook, New York and Spokane, Washington. Additionally, I visited Washington D.C. to discuss graduate student issues with Arizona legislators," Crowther said. "Serving as part of the assembly has been a wonderful experience and has taught me a lot about policy that I hope to apply to my career. I currently work on improving the separation of micro and nano sized bioanaltyes for the purposes of improving diagnostic techniques and furthering our understanding of various bioanalaytes.”

A GPSA Teaching Excellence Award has been given to Shanika Abeysooriya for teaching CHM 114 General Chemistry for Engineering Students: “I am a graduate student in Professor Don Seo's lab. My research involves exploratory synthesis of novel metal phosphates. We mainly focus on synthesizing novel solid acids,” she said. 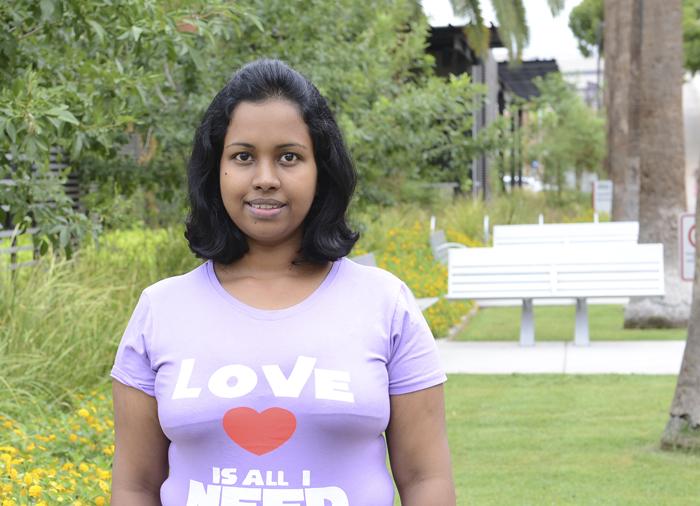 Sometimes world leaders change their minds, and when they do, they should get credit for that, according to an Arizona State University expert on global leadership.Jeff Cunningham, a professor of practice at Thunderbird School of Global Management at ASU, has spent the past two years probing the minds of top leaders in the worlds of business, politics and education.“My problem with life today is... 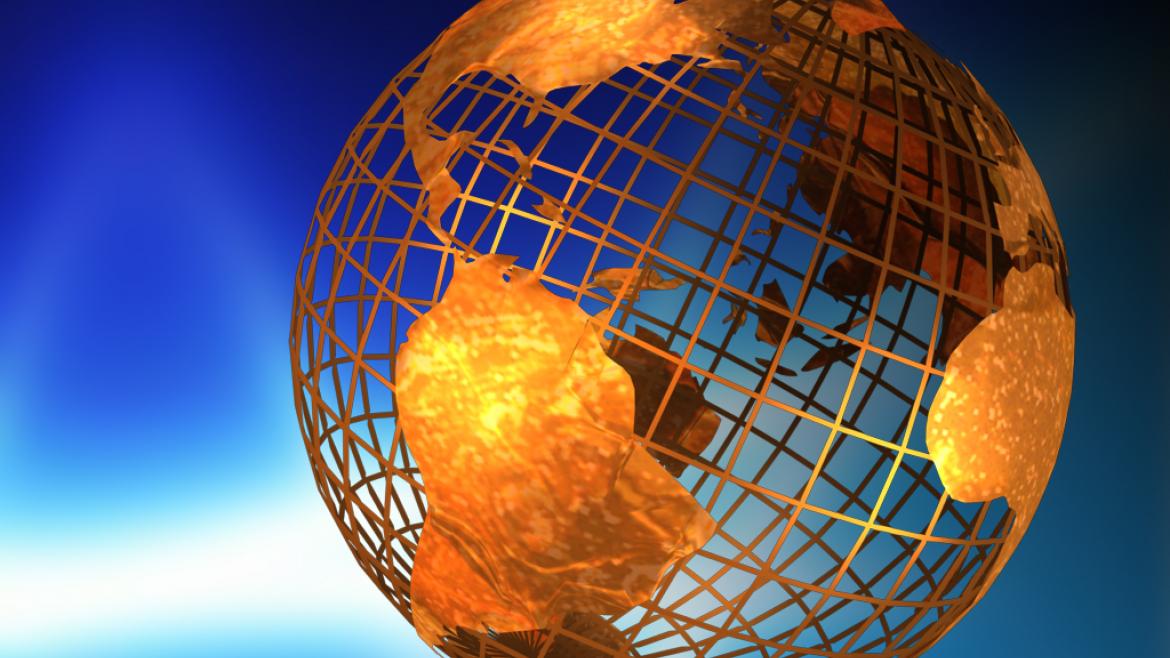 Sometimes world leaders change their minds, and when they do, they should get credit for that, according to an Arizona State University expert on global leadership.

Jeff Cunningham, a professor of practice at Thunderbird School of Global Management at ASU, has spent the past two years probing the minds of top leaders in the worlds of business, politics and education.

“My problem with life today is that we capitalize on people’s mistakes and we ignore when they reveal that they’ve had a change of heart,” said Cunningham, whose series “Iconic Voices” just added its 48th video — an interview with F.W. de Klerk, the former president of South Africa. De Klerk was a key negotiator of his country’s move away from apartheid, and he shared the 1993 Nobel Peace Prize with anti-apartheid activist Nelson Mandela.

“De Klerk recognized that apartheid was wrong and called it morally indefensible. And then he had to figure out how to change the country,” Cunningham said.

In the “Iconic Voices” interview, de Klerk describes his relationship with Mandela.

“It’s so emotional you’ll get goose bumps,” said Cunningham, who flew to Malta, where he was given only half an hour to interview de Klerk. 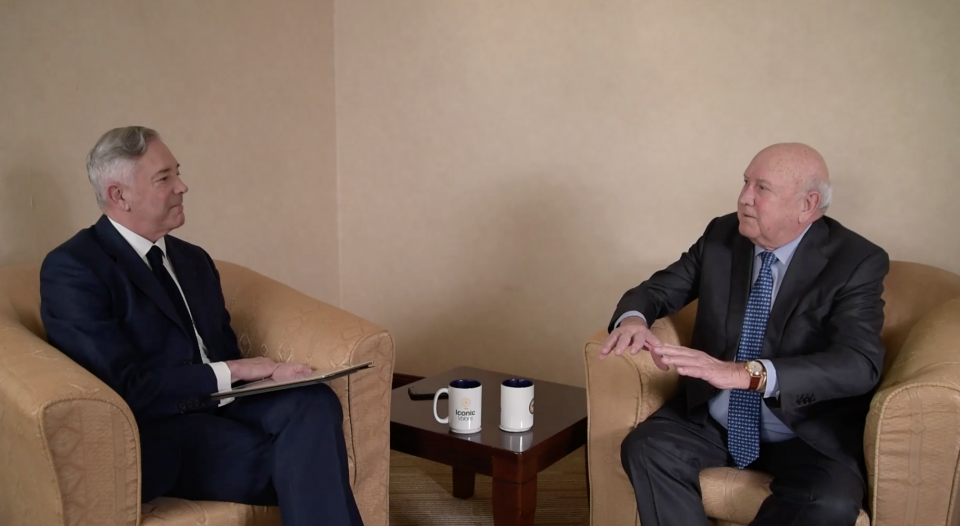 “Iconic Voices” came about by accident. When Cunningham came to ASU in 2014, he was a professor of practice with the Walter Cronkite School of Journalism and Mass Communication. With his background as the former publisher of Forbes magazine, he knew that the business model of journalism was rapidly changing, and he thought that the students should know more about that side of their industry. So he set out to establish a lecture series.

“He said, ‘I would love to do that, but I would love it if you came to Omaha,’ ” Cunningham said.

So Cunningham took a video crew to Omaha and recorded the interview with Buffett in his hometown.

“The next thing I knew, it was on YouTube and I was getting a thousand views a day,” Cunningham said.

“My next guest was Michael Milken, the most important financier of the 20th century, but who is best known for the fact that he spent three years in prison. I thought he would be a great, roguish character who would add insight,” he said.

The channel includes full interviews as well as edited-down bites, such as a 42-second clip with Buffett on “Why the media gets it wrong” (“I always worry about the journalist that decides what story they’re working on and they’re just calling me for confirmatory evidence.”) and a three-minute segment of McCain discussing the 2016 presidential election (“I feel we, people like me, probably underestimated the frustration that is fed to some degree by some of the talk shows that demand purity in all of us. And it’s exacerbated a sense of frustration that America is feeling.”)

Cunningham has interviewed about 20 people for the video series and an additional 30 for his digital series of articles, including profiles and essays on topics such as why Queen Elizabeth is a model of intelligent discourse.

Cunningham’s background is in business, not journalism, but he was tossed into the deep end after he launched Directorship magazine.

“I fired my editor and found out I had to put out the next issue,” he said. “If you fire the head chef, you have the cook the food.”

While all of Iconic Voices subjects are at the top of their respective fields, de Klerk is unique in what he has faced.

“He talks about the problems of the world today: poverty, climate change and the inability to deal with diversity,” Cunningham said of de Klerk, who is founder and chairman of the Global Leadership Foundation, which works to resolve conflict through mediation.

“These are three burning issues we are not dealing with, and de Klerk dealt with them.”

Cunningham is hoping to interview more female business leaders for his series.

“I believe women are so ready to run these companies and start them, and I’m looking to find people who have plowed that ground.”

Find the entire series of videos and articles here and the YouTube channel here. The new interview with F.W. de Klerk is here.