Necessity — and sometimes desperation — drive innovation, and several Arizona State University students have been rewarded for creating amazing solutions to problems they dealt with firsthand.

A woman who faced obstacles in her path to citizenship and a man who watched his newborn son struggle were among the members of five teams that won cash and services for their inventions at the New Venture Challenge entrepreneurial competition recently. The teams divided a $100,000 cash prize and $25,000 in services.

This spring, 10 student-led companies were selected to take a class taught by Scott Wald, a software entrepreneur who earned an MBA from ASU. They worked with Wald and other mentors on specific areas of entrepreneurship, such as financial forecasting and using storytelling. The five finalists pitched their ventures on May 5, winning cash or services such as accounting help, marketing and space. 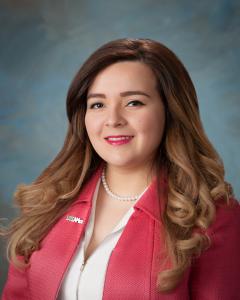 Tanairi Ochoa-Martinez shared her own immigration story in describing her venture. Ochoa-Martinez, who earned a master’s of public administration degree this week, created Mi Beneficio Legal, a web platform that helps Spanish-speakers navigate and fill out government forms to acquire legal status or get a green card to work.

“I am the customer,” she said. “I was undocumented, and I became a citizen a year ago. I have lived the fears, and I have felt lonely. I have felt that nobody was able to help me.”

Ochoa-Martinez said the $10,000 cash investment and $5,000 worth of services she won from New Venture will pay for software development and testing the platform this summer. She hopes to launch in the fall.

Spanish-speaking users will log onto Mi Beneficio Legal and choose a form to fill out. The platform will ask a series of questions in Spanish that the users answer, and at the end the form is automatically filled out. An avatar called “Lupe” will pop up to guide them. The goal is to simplify the process and reduce errors through an online format that is more affordable than going to an attorney.

Ochoa-Martinez thought of the idea after helping her father and numerous family members with their paperwork.

“I don’t have the capacity to help everyone. Why not create something that could replicate what I can do?”

The other teams that won cash and services at the New Venture Challenge were:

• KinderFeed, a feeding system for babies who have cleft palates, won $10,000 in cash and $5,000 in services. The CEO of the company, Callie LaMarche, was inspired after working with teammate Patrick McFarland, whose son was born with a cleft palate, which makes feeding very difficult. Existing bottles for babies with this condition are difficult to use.

“Patrick told me a story of when he was feeding his son, he would have to stop feeding, clean out the bottle and then start feeding his son again. I can only imagine how devastating this would be for a parent,” she said. Both are biomedical engineering majors.

The KinderFeed bottle system is leak-free and easier to squeeze formula into the baby’s mouth than existing bottles.

• Billibars, a detachable handlebar system for bicycles, won $35,000 in cash and $12,500 in services. Founder Trevor Heder worked as a professional bicycle mechanic to pay his way as an undergrad at Brigham Young University, where he earned a degree in Mandarin. Then he lived in China for a year, where he was a consultant for an industrial design company.

“I knew I needed to make a pivot in my career choice,” said Heder, who is now a graduate student in industrial design at ASU.

Heder, who also lived for two years in Taiwan, saw many people using bikes — and also having to store them in tiny apartments.

“That’s what sparked the idea of trying to solve the bike problem. I thought, ‘You’ve got to do something about these handlebars — they’re always grabbing you when you walk in the door,” he said.

Billibars, which come in three styles, can be used on any bike and attach and detach quickly. An accessory turns the handlebars into a wall rack for the bike. Heder has already secured a global patent and hopes to sell the system for about $100.

CEO Ankur Chowdary, a doctoral student in computer science, has already gotten $1.8 million in grants — including from the U.S. Department of Defense — to research his system.

Chowdary used a photo of cartoon duck to illustrate his concept.

“If this duck is setting statically in front of you, it’s easy to shoot the duck,” he said.

“But imagine the duck is flying all around the place. It’s hard to shoot this duck. We leverage the same concept with security.”

Chowdary said his system can predict attacks and move data around the cloud.

“Users we have identified as secure get access to a key, but for users identified as suspicious, we play a shell game with them. For them, the data is moving around very fast in the cloud, and it’s difficult for them to do any malicious act in the system.”

• Hoolest Performance Technologies, a company that has created device to reduce performance anxiety, won $25,000 in cash.

Founder Nick Hool, a doctoral student studying the neuroscience of human performance, was inspired by his own experience. In 2011, he was invited to play the World Golf Junior Tournament in Florida.

“I show up at the course, go through my warm-up routine and everything is good until I step up to first tee, and that’s where my anxiety kicked in,” said Hool, who described how his heart was pounding. He played terribly and was eliminated.

He and his team invented wireless ear buds that block the effects of anxiety through vagus nerve stimulation, using small electrical impulses. The impulses slow the heart rate.

Hool said the ear buds would initially be marketed to reduce performance anxiety among athletes, but eventually also for the medical anxiety market, such as people who have post-traumatic stress disorder.

“At Hoolest, we have a vision of helping hundreds of millions of people overcome their anxiety without the use of drugs,” Hool said.

Bees. Again.When they’re buzzing at Arizona State University’s four Phoenix-area campuses, your phone buzzes too. Even if you’re in another state or abroad, you’ll get the advisories if you’re entered into the university’s directory. “ASU Advisory — A message from ARIZONA STATE UNIVERSITY ASU Advisory-Polytechnic: Swarm of bees reported near Peralta stairwell. Please use caution ... 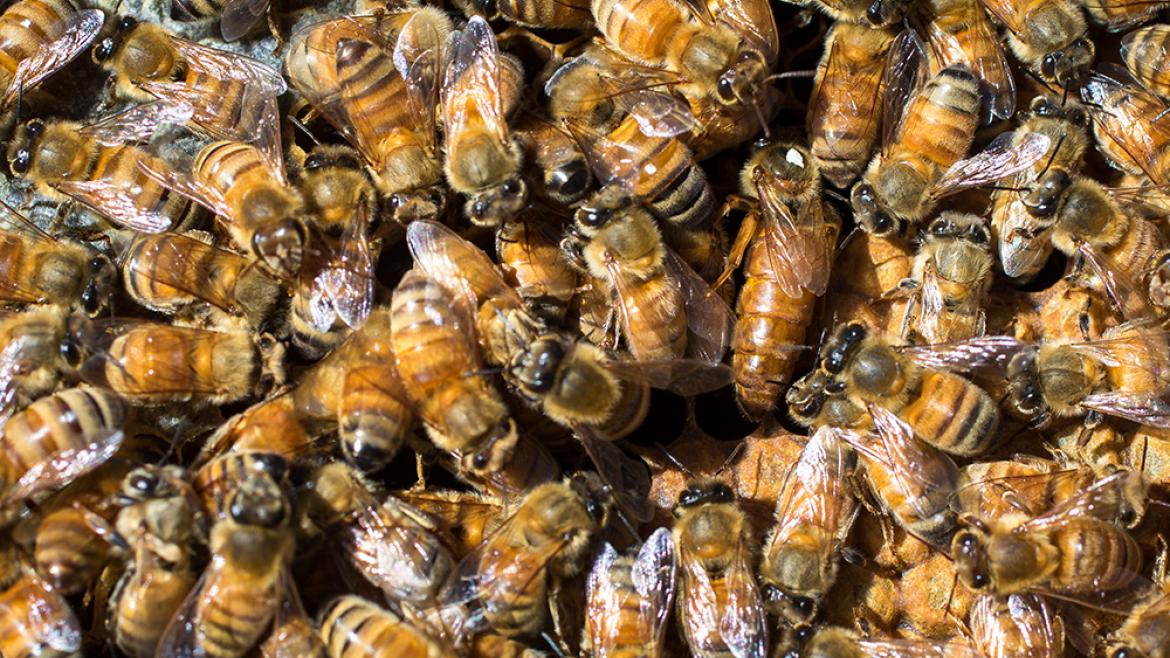 ASU's reputation as a bee campus: alerts, research and more.
Honeybees are on the decline, but spring is ripe for Africanized swarms.
May 9, 2017

From cellphone warnings about potentially dangerous swarms to world-class research, bees are a big part of Sun Devil community

When they’re buzzing at Arizona State University’s four Phoenix-area campuses, your phone buzzes too. Even if you’re in another state or abroad, you’ll get the advisories if you’re entered into the university’s directory.

“ASU Advisory — A message from ARIZONA STATE UNIVERSITY ASU Advisory-Polytechnic: Swarm of bees reported near Peralta stairwell. Please use caution in the area.”

But are there really that many swarms? Has anyone been stung? And aren’t bees on the decline? 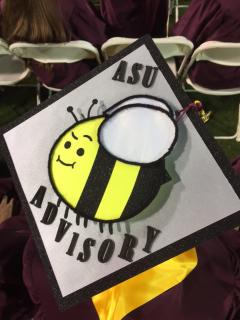 ASU students have fun with the bee advisories, which help direct Sun Devils away from potentially dangerous swarms. Photo by Steve Des Georges/ASU

“If I get one more email about bees at ASU I'm going to hire a personal exterminator to follow me around,” one student posted to Facebook.

“Got stung by one of the ASU bees yesterday,” another Twitter user posted. “Now this ... is personal. Keep those text alerts coming, ASU Advisory.”

“It’s how you know spring has arrived at ASU,” a Reddit user pointed out on one of the dozens of ASU bee threads.

Finally, another tweeter said: “ASU might as well change the damn mascot to killer bees since they overrun EVERY SINGLE one of our CAMPUSES!”

Well, not every campus. Thunderbird and West seem to bee free.

There have been no injuries from bees this year, ASU Police spokeswoman Katy Harris said. The department does not keep track of the number of bee advisories, but a review of their Twitter feed reveals there have been 13 this calendar year. (Before February the last advisory was in July 2016.) The Polytechnic campus had six, Tempe six, and Downtown Phoenix one.

“Our department just puts caution tape up around a swarm to keep people away and then removes the tape when they have moved on,” Newell said. “This is the busiest time of year for swarms, and we have had a lot, but really not more than normal. The swarms will usually move within 24 hours and most often quicker than that, so they are really only a slight inconvenience.

The real concern are aggressive hives that are in areas where people frequent or where the bees nest in building walls, and the honey starts causing problems.”

The university actually has a bee sightings Web page, most notable for its admonition to not aggravate the bees, even though they are aggravating you. 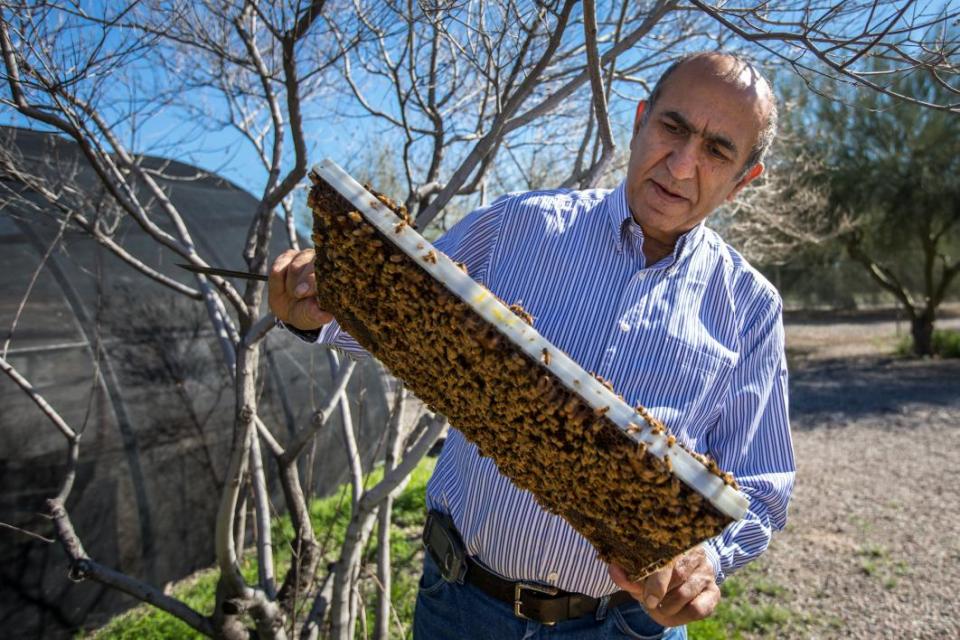 Osman Kaftanoglu pulls up a hive while looking for the queen and talking about the bee life cycle at the Bee Lab at ASU's Polytechnic campus.

Managed honey bee populations are declining. There were 5.5 million colonies in the U.S. in the 1950s, down to about 2.5 million now, according to Osman Kaftanoglu, lab project manager at ASU’s Honey Bee Research Lab — the largest bee research program in North America, outside of the USDA Bee Lab.

Pesticides, habitat destruction, pollution, honey bee diseases, parasites and combinations of all those factors are wiping out bees, but ASU researchers are looking for solutions.

Jon Harrison, an environmental physiologist who studies how insects function, interact with their environment and evolve, is partnering with other ASU scientists to study the effects two widely used fungicides have on bees. Research has shown that when bees are fed pollen containing these fungicides, they lose appetite and have difficulty digesting protein.

Robert Page, provost emeritus, foundation chair of life sciences at ASU and a prominent honey bee geneticist, has been studying and selecting bees that are superior pollinators. Page has found that some bees collect more pollen (a protein) and less nectar (a carbohydrate), and enjoy superior nutrition as a result. Selectively breeding this higher-protein-consuming population can lead to healthier bee colonies.

But if bee numbers are down, where are the swarms coming from?

Swarms come from Africanized feral colonies, Kaftanoglu said. Such bees were first introduced to Brazil in the 1950s. They arrived in North America in 1985 and have invaded all the Southern states.

“The number of Africanized colonies are increasing every year,” Kaftanoglu said. “Since they develop faster, swarm much more than the European colonies and are resistant to most bee diseases and parasites, they are expanding their territory and becoming more populous. That is why we are getting more swarm warnings and calls every year.”

Bees might not overrun every campus, but at ASU they have a home — just stay away from it unless you're helping with research.