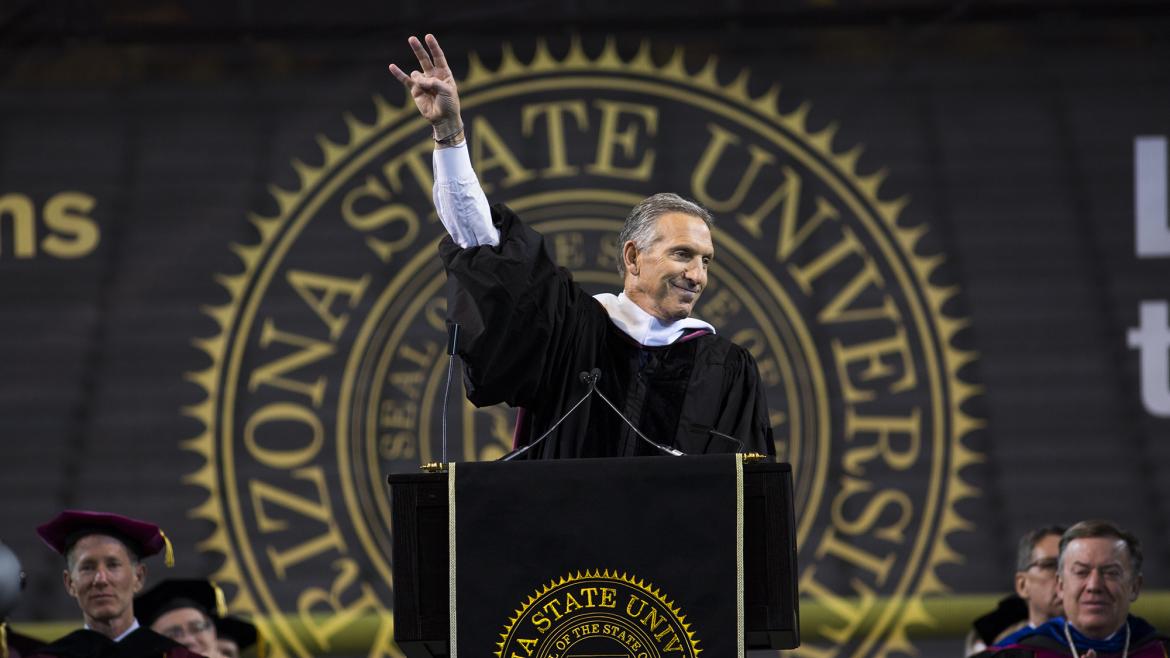 After years of intense study and hard academic work, the newly minted college graduates of Arizona State University’s Class of 2017 are enjoying the well-deserved kudos of family and friends for all that they accomplished as undergraduates.

But at the Monday evening Undergraduate Commencement exercises in Sun Devil Stadium, they were also encouraged to go beyond what they learned in the classroom in order to create the future that they want and deserve.

“Summon your compassion, your curiosity, your empathy towards others and your commitment to service,” Starbucks Executive Chairman Howard Schultz told the graduating class. “Give more than you receive, and I promise you it will come back to you in ways you can’t possibly imagine.”

Schultz, the former CEO of Starbucks and the partner with ASU President Michael M. Crow in the creation of the Starbucks College Achievement Plan, delivered the commencement address at ASU’s May 8 ceremony and received an honorary doctor of humane letters degree from the university.

He encouraged graduates to be mindful of how they will, throughout their lives, respect and honor their families, share their successes and serve others with dignity, and lead with humility and demonstrate moral courage.

And he said that the graduates are ready to change the world.

“You’re leaving this campus as the best-prepared generation in the history of our country,” Schultz said.

A personal journey to a new kind of business

Throughout his remarks, Schultz shared personal details of growing up poor in Brooklyn with a father who had to work a series of “terrible blue-collar jobs,” and talked of his success as the CEO of Starbucks and his opportunity to build the kind of company his father never got to work at.

Starbucks has been at the forefront of providing employee benefits such as health insurance and an ownership stake to its employees.

Most recently, Starbucks has focused on providing an education as well.

In 2014, ASU and Starbucks collaborated on a first-of-its-kind program designed to allow the coffee giant’s employees, whom it calls partners, to earn a bachelor’s degree, with full tuition reimbursement through ASU’s digital immersion courses. More than 7,172 partners are now participating in the Starbucks College Achievement Plan.

Schultz congratulated the 330 Starbucks partners who graduated on Monday, but his speech was aimed at all graduates.

“Your generation can bring people together like no other,” he said. “You can innovate, create and lead.”

In his address to the Class of 2017, Crow reminded graduates that their time at ASU was not designed to merely train them for a job.

“We’re training you, enabling you to be able to learn anything so that you can do almost any job,” Crow said. “So that you can accomplish almost anything. … A bachelor's degree to me means that you have found a way to begin the process of the mastery of learning itself.”

And he encouraged graduates not to accept the status quo no matter what field they enter, be it art or science, engineering, business or philosophy.

“Begin today to understand that it is the status quo itself which holds us back from attaining all of the things that we dream about as a society,” he said. “We cannot sit back and accept the way things have always been. Because we always must be advancing them towards these higher goals.”

Earlier Monday, ASU hosted a luncheon in Schultz’s honor. After being presented with his honorary degree, Schultz described the work between his company and the university as doing exactly what Crow called for.

“The ASU-Starbucks partnership is a beacon of hope, not only to the students who have benefited from it, and our company’s culture and pride in what we have done, but it’s a demonstration that you can disavow the status quo,” Schultz said. “You can reinvent it. And you can be the kind of leader serving people that demonstrates that we are at our best when we do everything we can to lift people up.”

He also praised Crow, describing him as a “force.”

“You probably all know that,” he said to laughter. “He is a force for good, and the Starbucks coffee company has benefited from his partnership, and I have personally benefited from the enduring friendship that I have built with Michael Crow.”

After the luncheon, Schultz and Crow hosted an open forum for the graduating Starbucks partners. Partners from all kinds of backgrounds — single parents, military personnel, first-generation college students, Iraqi refugees — shared their personal stories of achievement.

Health sciences major Susana Mojica said she signed up for the Starbucks College Achievement Plan the same day she learned of it. The daughter of Mexican immigrants had always wanted to go to college but had to drop out after one year at Syracuse because of the cost. Because of the Starbucks College Achievement Plan, she now has a four-year degree and will be starting a master’s program in the fall.

“I know that a degree is not a waste of money,” Mojica said. 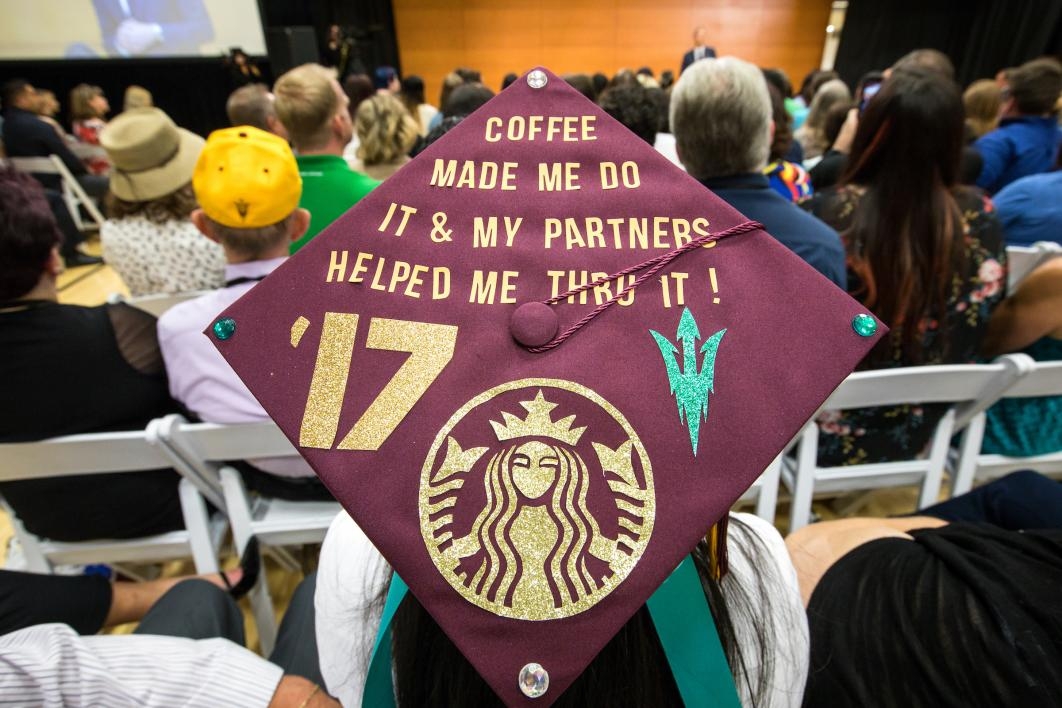 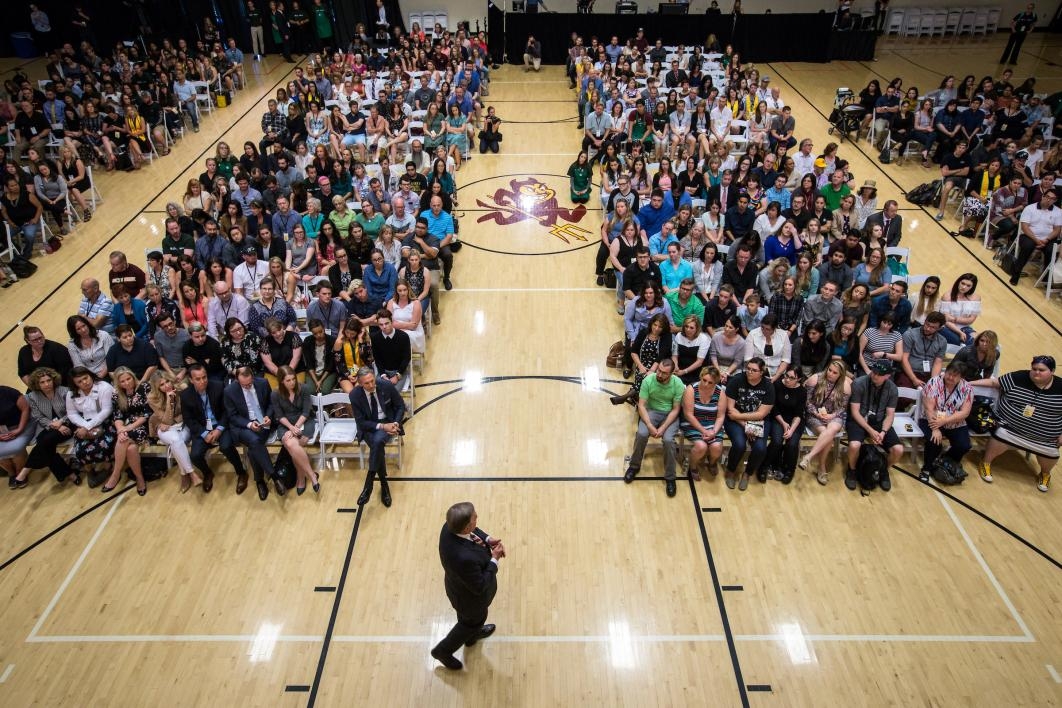 ASU President Michael Crow addresses the Starbucks Partner Forum. Both Starbucks Executive Chairman Howard Schultz and Crow talked to the 800 people at the Sun Devil Fitness Complex gym in Tempe about the Starbucks College Achievement Plan and heard stories of overcoming adversity to earn an education. Starbucks Executive Chairman Howard Schultz listens to a partner's story of how Starbucks and ASU made a college education possible for him at the Starbucks Partner Forum. 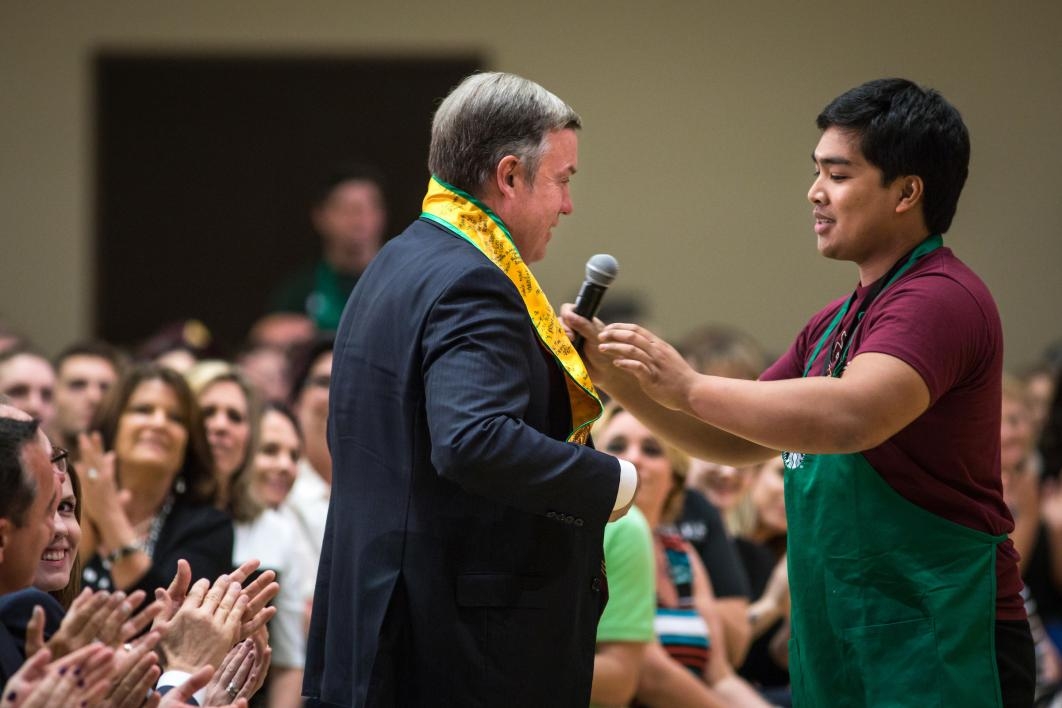 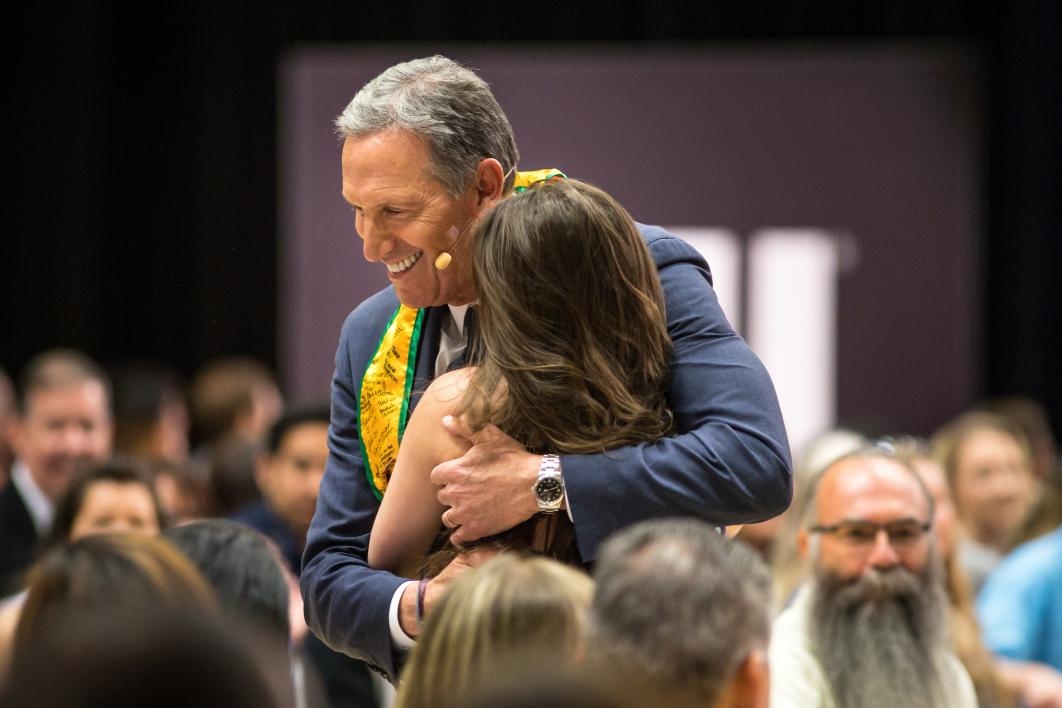 Starbucks Executive Chairman Howard Schultz gets a hug from Alyssa Fagan, of Jersey City, New Jersey, after she told him how Starbucks and ASU made a college education possible for her, at the Starbucks Partner Forum. Fagan took advantage of Starbucks College Achievement Plan and is receiving a bachelor's in art history. 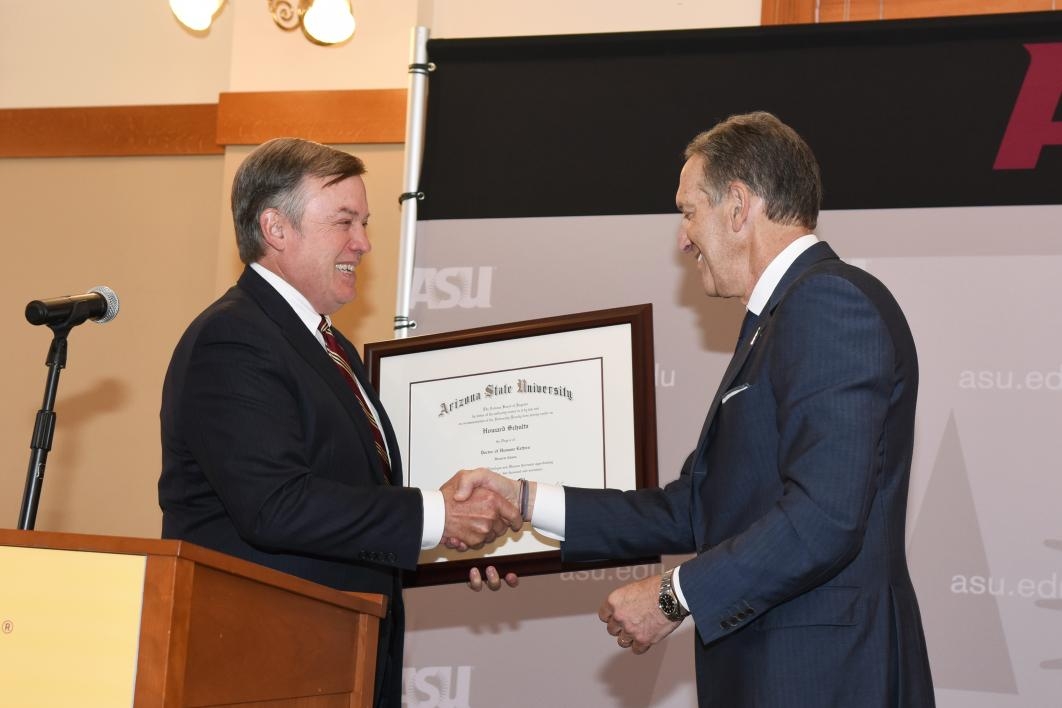 Many who spoke were overcome with emotion, embracing Schultz and thanking him for what the program has made possible. Schultz responded by reminding them that the “unorthodox partnership” wouldn’t have been possible without “the unbelievable innovation of ASU and its president, Michael Crow.”

Both Schultz and Crow referred to America’s broken education system, where mounting student-loan debt and lack of access are signs that there needs to be a disruption of the status quo.

Even more stand to benefit from the program. Starbucks and ASU announced in March an expanded Pathway to Admission, which gives academically ineligible partners another opportunity to seek admission to ASU by successfully completing a series of courses offered through Global Freshman Academy.

A reason for hope

At Monday’s ceremony, Schultz alluded to the political situation in the country, saying that many of the graduates may be questioning the strength of the American Dream.

“Today you may question that dream and the promise of America,” he said to graduates. “And that’s fair. My generation has not made it easy for you. Our political leaders on both sides of the aisle have not acted with enough courage nor honesty in addressing the long-term challenges we face.”

But, he said, he has reason for hope.

“Despite all that, when I look to the future, I am extremely optimistic, especially when I look out and see you.”

Editor’s note: This is part of a series of profiles for spring 2017 commencement. See more graduates here.Keyaanna Pausch graduates from ASU this week – something she says might not have happened if she hadn’t discovered ASU’s digital culture program in the School of Arts, Media and Engineering, a transdisciplinary unit formed between the Herberger Institute for Design and the Arts and t...

Keyaanna Pausch graduates from ASU this week – something she says might not have happened if she hadn’t discovered ASU’s digital culture program in the School of Arts, Media and Engineering, a transdisciplinary unit formed between the Herberger Institute for Design and the Arts and the Ira A. Fulton Schools of Engineering. The digital culture program teaches students to use digital tools and integrate computational systems with everyday physical human experience. 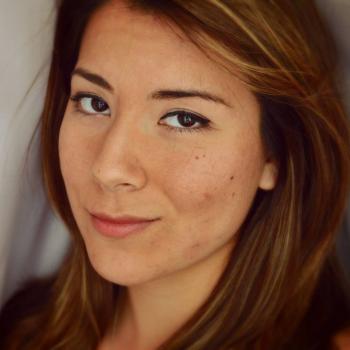 “I loved math and logic as an engineer but hated the idea of calculating numbers for making a bridge, finding the velocity of a ball or looking at number patterns,” Pausch said. “I still wanted to be creative and use my interest in math to create visually interesting products like 3-D printing sculptures, interactive installations and creating video effects.”

One day, her dad showed her a brochure that had come in the mail detailing ASU’s new digital culture major, and since that day, Pausch has been thankful.

“I did not think a program like digital culture existed,” she said. “In fact, it sounded like heaven to me. It combined both of my interests: creativity and logic.”

If she had never switched majors, Pausch said she probably would have lost motivation and flunked out of school, or, if she had graduated, she would have been unsatisfied.

"Being at the Herberger Institute has significantly changed my creative outlet and presented new obscure ways for me to experiment with technology and art,” she said.

Todd Ingalls, an associate professor of research in the School of Arts, Media and Engineering, mentored Pausch, who participated as an undergrad research assistant with the Synthesis Center.

"He showed me a lot of programming techniques that blew my mind," Pausch said. "Now I feel more abstract and technical with my craft when programming interactive installations."

Pausch answered some questions about her time at ASU.

A: Taking WST 100: Women, Gender, Society dramatically changed my perspective and introduced me to topics that I've been oblivious to like politics, body representation, personal empowerment, sexuality, gender and identity.

A: I chose ASU because I wanted to attend a four-year university close to my home before I venture out to other states/countries.

A: Explore college to the best of your comfort and ability to learn more about yourself, whether that'd be courses you're curious about to develop your perspective on politics, religion and gender/identity or attending social events/clubs like intramural sports or swing dancing. Give time to learn more about yourself and develop as an individual to think and create on your own and to enjoy being with yourself.

A: The best building on the whole campus is Design North. There's a quiet cafe, a beautiful underrated library and a balcony to eat lunch at. It's the least crowded area on campus and has great atmosphere.

Q:  What are your plans after graduation?

A: I will be applying to intern with the intension of building a career at art institutions like the Phoenix Art Museum, the Scottsdale Museum of Contemporary Arts or the Arizona Commission of the Arts.