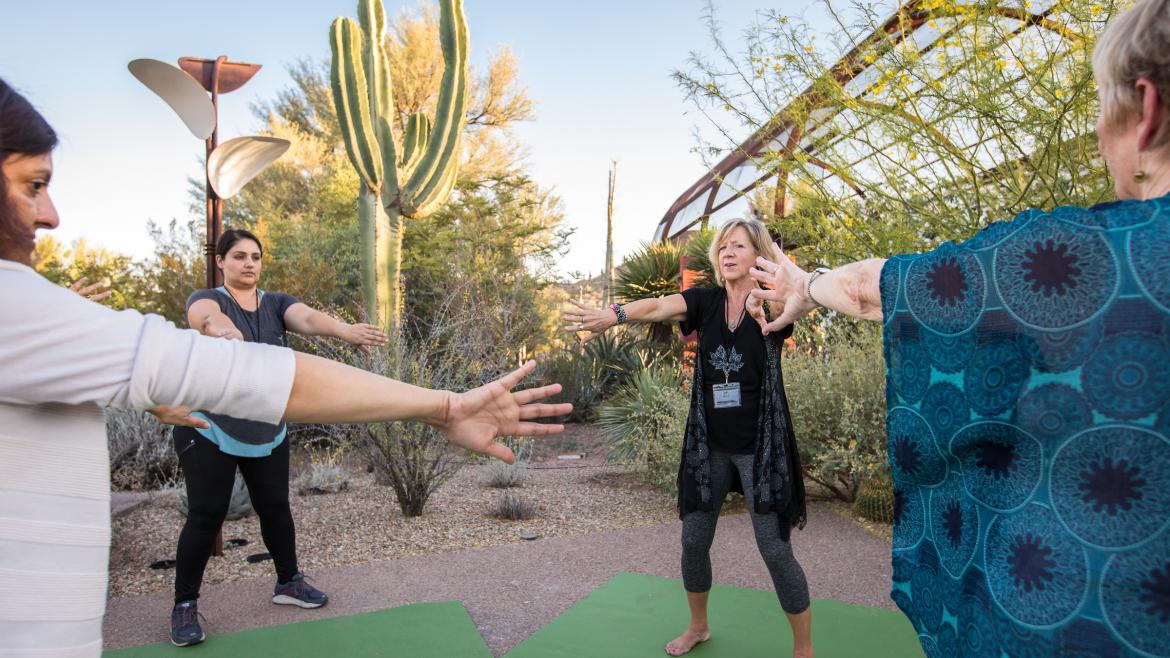 'Mindfulness is a skill set': ASU poised to contribute

ASU poised to contribute to mindfulness movement with research, collaboration.
May 4, 2017

Standing at the front of a large lecture hall as hundreds of college students streamed in with their books, bags and devices, headphones still in their ears, something dawned on William Heywood. They were distracted from the moment they came in the room.

Heywood, assistant director of The Design School at ASU, began starting each class with five minutes of what he called “centering.” Five quiet minutes where students were asked to unplug, breathe deeply and be present in the moment.

After doing this for a while, Heywood said he noticed class engagement and performance improved. He called it centering, but many may know it as mindfulness.

Over the past decade, it has become a buzzword with the rise in popularity of such practices as yoga, tai chi and meditation. The New York Times regularly reports on it, it’s being taught to kids as young as preschool and the U.S. Army has adapted it into its training.

But what is mindfulness, and why is it becoming the zeitgeist of the 2010s?

“Mindfulness is a skill set, and it means the ability to pay attention, with intention, to the present moment,” said Teri PipePipe is also dean of ASU's College of Nursing and Health Innovation and a research professor., ASU's chief well-being officer. “We are living in a society that is characterized by uncertainty, and there are lots of pulls and tugs to our attention and … multiple stimuli coming at us from multiple channels.

“Learning this skill set, learning to pay intentional attention to whatever is in front of us in the present moment will help all of us cope much better as a society.”

On Wednesday evening, Pipe welcomed deans, faculty, students and community members — about 175 in all — to the grand opening of ASU’s Center for Mindfulness, Compassion and Resilience.

Surrounded by the natural desert landscape, ASU Research Professor Linda Larkey stood calmly with her eyes closed as she slowly raised and then lowered her arms. A small breeze fluttered the leaves on the tree behind her and glasses clinked in the background, but she was unfazed as she began turning rhythmically from side to side.

Larkey is a practitioner of qigong, similar to yoga in its focus on posture and coordinated, fluid movements. She studies how such mind-body methods can alleviate symptoms in cancer survivors. Along with the calming effects of mindfulness, Larkey said, “there’s a whole cascade of changes in the body’s ability to make its own medicine.”

The center will bring together researchers like Larkey, as well as practitioners and educators across disciplines at ASU to collaborate, study and spread ideas about mindfulness, compassion and resilience throughout the university and surrounding community.

Six years ago when Pipe came to ASU from the Mayo Clinic, she discovered a number of university faculty already immersed in the mindfulness field. She felt a sense of personal responsibility to connect them, and did so with a potluck at her house. The guest list grew from 20 to more than 100, and Pipe decided it was time to formalize things. She put together a proposal for the center last summer, and now it’s a reality. William Heywood, assistant director of The Design School at ASU, demonstrates Tibetan singing bowls and their calming sounds to nursing school alumna Lynette Murphy at the grand opening of ASU's Center for Mindfulness, Compassion and Resilience at the Desert Botanical Garden on Wednesday. The new center was inspired by Teri Pipe, dean of the College of Nursing and Health Innovation. 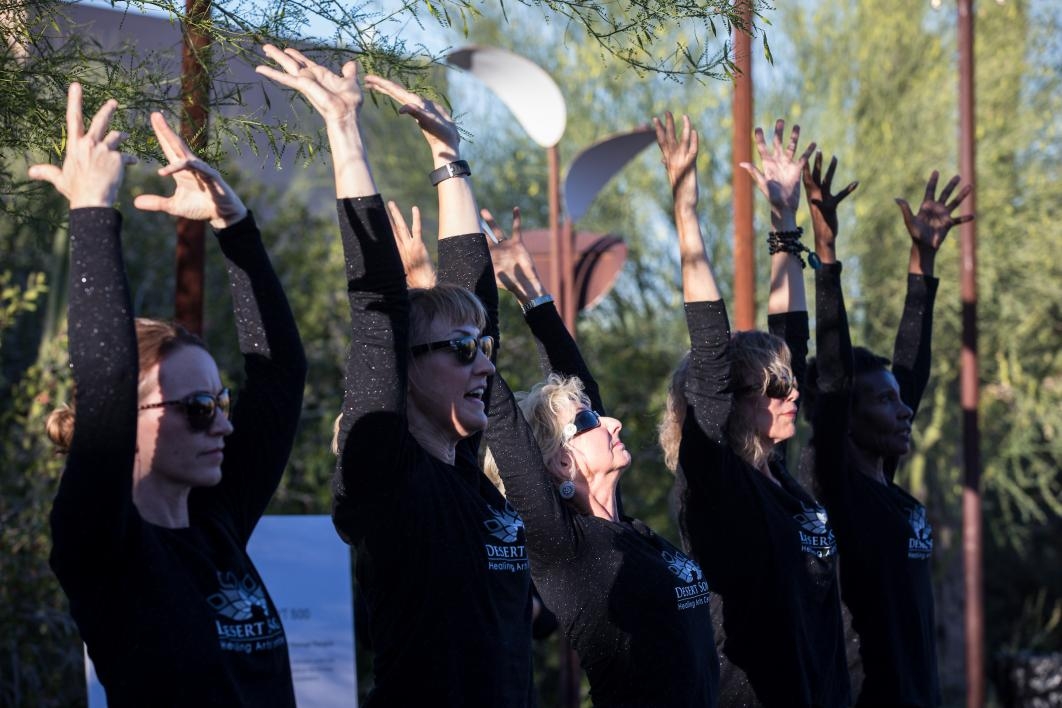 Mary Beth Markus (third from left), director of the Desert Song Healing Arts Center in Phoenix, and others perform yoga moves at the grand opening of ASU's Center for Mindfulness, Compassion and Resilience. 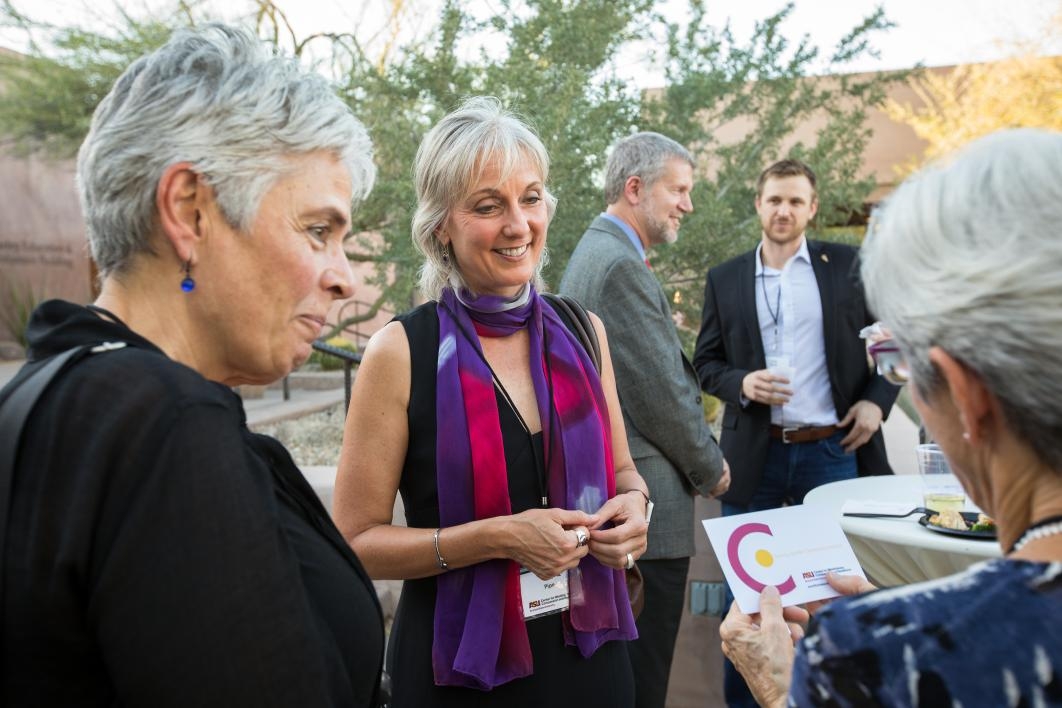 Teri Pipe (center), dean of the College of Nursing and Health Innovation and ASU's chief well-being officer, speaks with along with co-director of the ASU InnovationSpace Heidi Fischer (left) and others at the Desert Botanical Garden on Wednesday. 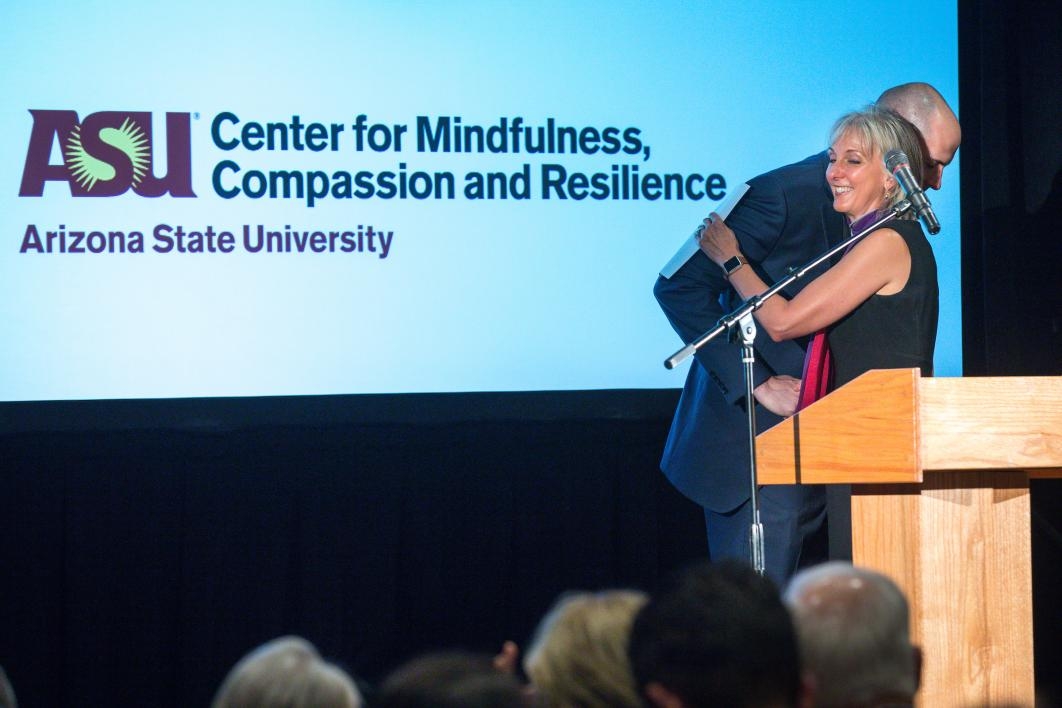 College of Health Solutions Director of Development Eric Spicer greets Dean Teri Pipe after introducing her at the grand opening of ASU's Center for Mindfulness, Compassion and Resilience on Wednesday. Pipe wants the principles to be synonymous with the university.

“The president, the provost, other deans, all university leadership have been phenomenally supportive,” Pipe said. “ASU has this reservoir of expertise and motivation and desire to use mindfulness as scientists and educators. … So [this center is] connecting people around these concepts, and then just amplifying the work.”

Members of the community have also been supportive of the initiative.

Last year, Mike and Cindy Watts made a $1 million commitment to help launch the center. Their generous donation contributed to Campaign ASU 2020, a campus-wide effort to raise at least $1.5 billion.

Pipe has a grand vision for the center, one that will ingrain the ideas of mindfulness, compassion and resilience into the culture of the university, in the same way that sustainability and innovation are.

Top photo: ASU Research Professor Linda Larkey, a practitioner of qigong, leads a group through the moves at the grand opening of ASU's Center for Mindfulness, Compassion and Resilience at the Desert Botanical Garden Wednesday evening. The new center was inspired by Teri Pipe, dean of the College of Nursing and Health Innovation and the university's chief well-being officer, and began as group meetings with 20 people at her home. Photo by Charlie Leight/ASU Now

Arizona State University’s graduation ceremonies coincide with a weeklong celebration of one of Arizona’s biggest industries: tourism. National Travel and Tourism Week runs May 7 to 13, highlighting both the people that power this sector and the personal well-being gained through travel.  This semester, two ASU master’s students and 82 undergraduates will be entering the tourism workforce....

Arizona State University’s graduation ceremonies coincide with a weeklong celebration of one of Arizona’s biggest industries: tourism. National Travel and Tourism Week runs May 7 to 13, highlighting both the people that power this sector and the personal well-being gained through travel.

This semester, two ASU master’s students and 82 undergraduates will be entering the tourism workforce. 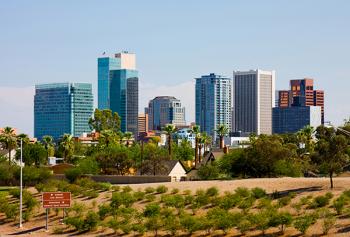 Travel and tourism have existed for a long time, but an organized industry and university degrees are relatively young. Christine Vogt, professor of tourism at ASU, does not believe a tourism degree was around when she attended college for her undergraduate degree.

“In the 1990’s, tourism degrees were becoming available. As an interdisciplinary area of study, there are so many doors to study and work in the tourism industry,” said Vogt, who leads the ASU Center for Sustainable Tourism.

As students graduate this week, many will have family visiting Arizona to celebrate with them as well.

According to the Arizona Office of Tourism, visitors spending generated $21 billion in 2015. More than 180,000 people are employed in the local industry and it generates $2.9 billion in federal, state and local tax revenue.

Here's a short list of highlights in the Phoenix-Tempe-Mesa area to make the most of a visit to Arizona:

2. Visit world-class museums along Central Avenue in Phoenix, including the Phoenix Art Museum and the Heard Museum.

3. Phoenix is a city of parks — large mountain parks frame our urban space. Start at South Mountain Visitor Center off of Baseline Road and then select the right trail length and challenge. Piestewa Peak, north of downtown Phoenix, offers picnic ramadas and an assortment of trails.

4. The Musical Instrument Museum is top rated and one of a kind. The museum is located in north Phoenix near Mayo Clinic.

5. Tempe’s Town Lake features a lake with many active recreation opportunities including walking, biking and running trails. Boating is also possible and rentals are available.

6. For transport, use the Light Rail to get from the airport and between the Tempe and Downtown Phoenix campuses and graduation venues.