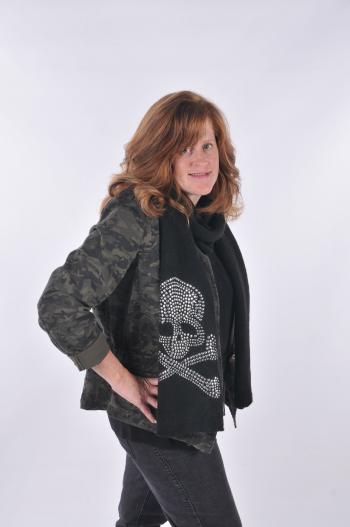 Graduating ASU student Karol Pomplin has advice for those struggling to complete a degree: "When you take time away from school, it’s not always easy to find your way back, but it’s never too late. I am graduating from college and turning 50 within the same week. I often tell my son, who is currently serving in the military, as well as my fellow baristas, always accept every opportunity to learn and further your education." Download Full Image

Then she heard about Starbucks’ partnership with Arizona State University, and applied to Starbucks as a barista. Her application to ASU soon followed.

For the past two years, when not serving up Frappuccinos, Pomplin has been immersed in reading and writing for her online bachelor's in English. Among her favorite literary works? Bram Stoker’s “Dracula.” “My reading tastes tend to lean toward the macabre,” she says. After she graduates this spring, Pomplin looks forward to “tackling” some Toni Morrison titles as well.

We caught up with her to find out what else is on the horizon.

Question: What was your "aha" moment, when you realized you wanted to study in your field? (Might be while you were at ASU or earlier.)

Answer: When I was in high school, and teachers would ask about my life goals, I had a stock answer. I wanted to be a writer. I nearly finished college in my early twenties, but life happened. I detoured through parenthood, but my dream of finishing college persisted. Today, my stock answer is the same.

I want to be a writer.

A: Learning a foreign language online is challenging. The classes were very time-consuming and demanding, but I’m grateful for this experience. Even after two years of study in Spanish, I am far from fluent. However, it provided me with an enriched appreciation for how difficult it must be for those living in a country that does not speak their first language. I had always considered myself sensitive to this issue, but had no way to grasp the level of difficulty in learning a second language.

A: We move a fair amount due to my husband’s career. It made it difficult to establish residency in one state and reside there long enough to finish. I heard of the college achievement plant through Starbucks and applied as a barista. I’m very thankful. I consider the opportunity to finish college a true blessing.

A: Never give up and try not to delay. When you take time away from school, it’s not always easy to find your way back, but it’s never too late. I am graduating from college and turning 50 within the same week. I often tell my son, who is currently serving in the military, as well as my fellow baristas, always accept every opportunity to learn and further your education.

A: I’m an online student and have never actually been on campus. I did drive through Arizona once when I was 15, does that count?

A: This fall, I plan to take a few classes pertaining to editing. Learning more about this skill will help to improve my own writing. I would also like help other writers achieve their dreams to see their work published. I also hope to volunteer to help tutor students working to obtain their GED.

A: It’s a difficult choice. As a parent, I always want to fix everything. However, base needs of survival would take priority for me. Poverty and hunger are such critical issues in our world today. No one should ever have to go without a meal. It’s such a basic need that most of take for granted.

Megan Tom sees working in education research, policy and tribal law in her future.“I want to do a lot of things; professor, researcher, policy advocate, administrator, university president. Over all I want to support tribal colleges and their missions,” said Tom, a junior in Barrett, The Honors College at Arizona State University majoring in English literature and minoring in public policy.“...

“I want to do a lot of things; professor, researcher, policy advocate, administrator, university president. Over all I want to support tribal colleges and their missions,” said Tom, a junior in Barrett, The Honors College at Arizona State University majoring in English literature and minoring in public policy. 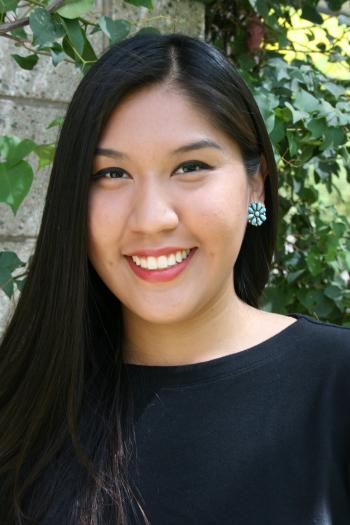 “My particular interest is in tribal education,” she said, adding that in the coming five years, she would like to complete a graduate degree at University of Oxford and a doctorate at ASU and then work on education policy and student achievement at universities and tribal colleges starting in the Northwestern United States.

As a Navajo first-generation college student from Cameron, Arizona, she already is immersed in Native American higher education research and policy. Since last July, she has served as a junior research scholar at the ASU Center for Indian Education. She also was a campus coordinator at Teach for America-Phoenix.

Her honors thesis will focus on the effects of higher education policy, campus climate, and student leadership on American Indian students. As President of the American Indian Council, she led a campaign to recognize Indigenous Peoples' Day on all of ASU’s campuses, and assisted with the city of Phoenix campaign.

“ASU sits on the ancestral homelands of the Akimel O’odham and Pee Posh people, and it’s important for our future leaders and universities to continuously honor and acknowledge indigenous people, because our indigenous people make up socioeconomic diversity and need to be included in the decision making process,” she said.

Tom explained that these experiences, as well as her observations about education issues on the Navajo Nation and within tribal communities, have given her a multi-faceted perception of education policy. And these experiences will continue, as she will be interning this summer at the College Board National headquarters in New York City.

“Sometimes people think of education as separate from other types of policy, but that’s not always the case. For example, on the Navajo Nation there was a mine that was shut down because of environmental concerns, but that mine funded a very important scholarship for Navajo students,” she said.

“There’s also an environmental aspect to education; when you don’t have access to clean water you can’t be concerned about not having a bachelor’s degree. Or, when you can’t get to school because the roads are flooded, that’s a problem,” she added.

“I want to work on education policy that addresses how people access education when they are not having their basic needs met and how Native students can prepare themselves to succeed in their tribal colleges or major universities.”

Tom’s commitment to Native American policy issues has been recognized with a 2017 Udall Undergraduate Scholarship in Tribal Policy.

The scholarship, worth $7,000, is given by the Tucson, Arizona-based Udall Foundation to college sophomores and juniors for leadership, public service, and interest in issues related to Native American nations or to the environment.

The scholarship honors the legacies of Morris K. Udall, who represented Arizona in the U.S. House of Representatives for 30 years, and his brother Stewart Udall, who served as U.S. Secretary of the Interior in the Kennedy and Johnson administrations. Their careers had a significant impact on Native American self-governance, health care, and the stewardship of public lands and natural resources.

This year, 50 students from 42 colleges and universities throughout the United States have been selected as 2017 Udall Scholars. A 15-member independent review committee selected this year’s group on the basis of commitment to careers in the environment, Native health care, or tribal public policy, leadership potential, record of public service, and academic achievement. This class of Udall Scholars was selected from 494 candidates nominated by 224 colleges and universities.

The 2017 Udall Scholars will gather in Tucson on August 8–13 to meet one another and program alumni, learn more about the Udall legacy of public service, and interact with community leaders in environmental fields, tribal health care, and governance.

“I am really honored, grateful, and reflective on what I had to do to get the scholarship. It took a lot of work to go through the process,” Tom said.

That process included completing an extensive application with several essay-type questions, submitting letters of recommendation as well as grade transcripts, and writing an 800-word essay.

Tom credits her colleagues and mentors at the ASU Center for Indian Education (CIE) with helping her complete the application. Colin Ben, CIE postdoctoral research fellow, boosted her confidence and helped her refine the essay. “I also have to thank my recommenders, Dr. Jessica Solyom, Dr. Erik Johnston and Charlinda Haudley, because they also serve as my mentors.” Tom said.

She also received assistance with the application process from the Office of National Scholarship Advisement housed at Barrett Honors College in Tempe.

“The Udall Scholarship is of special significance to ASU, not only because it is named in honor of native Arizonans Morris and Stewart Udall, but because it recognizes two of our points of pride: a commitment to sustainability and a concern for Native American issues,” said Kyle Mox, ONSA director.

“Megan is a remarkable young leader who has had and will continue to have a major impact. The Udall Scholarship will be a ‘force multiplier’ and accelerate her professional development,” Mox said, adding that only 10 awards were made to Native American candidates this year, further underscoring the significance of Tom’s accomplishment.