If there’s a checklist for a career in public service, Blaise Caudill has all the boxes marked with three asterisks next to his name. 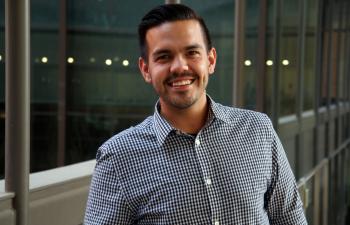 Caudill is an exemplary graduate student with a 4.0 GPA. He has considerable experience working on local government issues as a student and an intern. He’s active as a leader in student and community organizations. And he brings a level of enthusiasm that separates him for his peers.

That’s why the School of Public Affairs, in the College of Public Service and Community Solutions in downtown Phoenix, has named Caudill the spring 2017 outstanding graduate.

While pursuing a master’s degree in public administration, Caudill volunteered as student chapter president of the International City/County Management Association and served as a management intern for the city of Goodyear. He was also one of a handful of students selected each year to serve as a Marvin Andrews Fellows, a program designed to train the next generation of municipal leaders. The fellowship included working as a paid research and management intern for the Alliance for Innovation.

“My experience with ASU, in particular, the Marvin Andrews Fellowship, provided the avenues for me to explore government and work in public administration,” Caudill said. “I have been able to connect with working and retired professionals in ways that I could not have otherwise imagined.”

As president of International City/County Management, Caudill worked diligently to improve the organization’s reach to students and professionals.

“This year, we were really able to boost the work done by the organization to be more inclusive, more engaging for students and professionals, and to advertise in ways we have never done before,” he said. “We have had a record number of events with more professionals engaged than ever before.”

George Pettit isn’t surprised. As director of the Marvin Andrews Fellowship in Urban Management, he said what sets Caudill apart from others is his energy and passion to make a difference.

“It’s just a desire to serve and listen to others in order to make government responsive,” Pettit said.

Caudill credits his mother, who as a single parent and school teacher, instilled the value of public service and education. His mom pushed Caudill and his siblings to earn their college degrees.

As an undergraduate student majoring in international relations and affairs at Northern Arizona University, Caudill was heavily involved in school and community organizations and was recognized with the President’s Prize, the highest recognition awarded to graduating students. Caudill has continued his legacy of involvement at ASU. He serves on the national board of governors for the Human Rights Campaign, the world's largest LGBTQ advocacy organization.

“As part of my service to ensure equal protections for all people, I connect Arizonans with opportunities to volunteer with the organization and provide the tools and training necessary for volunteers to feel prepared and a part of a larger movement,” Caudill said.

The Tucson native considers graduate school much like a dress rehearsal for his career. And a successful one at that. After graduation, he will begin his professional career as an assistant to Mesa city councilman Jeremy Whittaker.

“I know my studies and the connections I made through ASU and the School of Public Affairs provided me with the tools I will need to succeed in my new position with the city of Mesa,” he said. “I love Arizona — we are one of the most diverse, beautiful, and unique states in the nation. I am looking forward to serving our Arizona community in any way that I can.”

Growing up, Dyan Urias took it as a given that one day she’d go to college, but it wasn’t until high school that she began to understand how tough it would be.Urias (pictured above), the daughter of a migrant farmworker, would have to leave her small town of San Luis, figure out how to pay for school and navigate everything from getting admitted to scheduling classes. She made it to ASU this ... 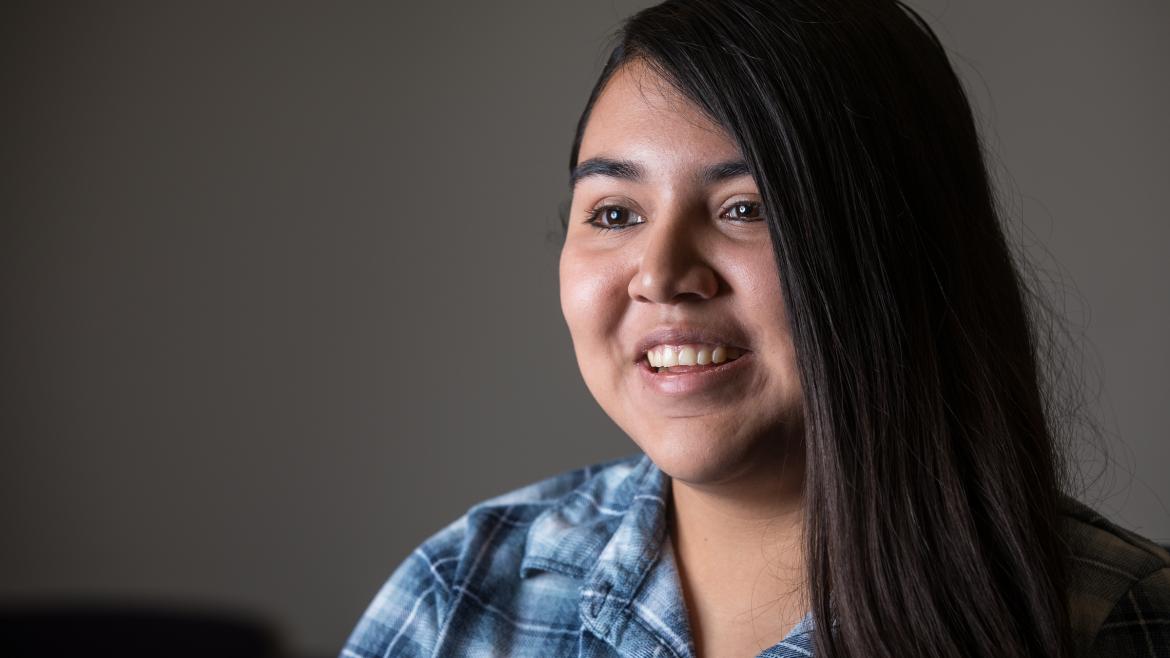 Growing up, Dyan Urias took it as a given that one day she’d go to college, but it wasn’t until high school that she began to understand how tough it would be.

Urias (pictured above), the daughter of a migrant farmworker, would have to leave her small town of San Luis, figure out how to pay for school and navigate everything from getting admitted to scheduling classes.

She made it to ASU this fall but was having trouble adjusting — until she heard about the College Assistance Migrant Program.

CAMP is “like a family,” Urias said. “It gives you that moral support.”

The 45-year-old federal program, housed at the School of Transborder Studies, helps students from migrant and seasonal farmworker backgrounds in their first year of college with academic, personal and financial support. In the fall of 2016, ASU was awarded its first CAMP grant of $2.1 million from the U.S. Department of Education to support 160 students over five years.

“Even though Arizona has the eighth-largest population of migrant students in the U.S., only about 20 percent make it to college. CAMP is here to remove barriers to higher education for migrant students, and provide them a ‘home’ here on campus where we understand and value their background while helping them navigate the university.”

CAMP is one of many ASU resources for underrepresented student populations. Others include the Inspire summer camp, a college-readiness program for American Indian students from tribal nations in Arizona; the Pat Tillman Veterans Center, which boosts student veterans, active-duty military members, their spouses and dependents; the DREAMzone initiative, which provides support for undocumented students; and the Women of Color STEM Entrepreneurship Conference, an annual event geared toward women and specifically women of color in higher education.

Since being accepted to CAMP, Urias no longer has to worry about tuition or textbook expenses and she has a place she can go where she feels at home. She went to high school in San Luis with several other members of the current cohort. They meet every Sunday for study hall and catching up.

Those meetings have also served as a place for the students to learn more about university resources, such as financial aid, internships, jobs and community service opportunities.

“It helped me get involved, and I became a site leader,” he said. “That was really fun because I got to take care of 20 people and got to know them.” 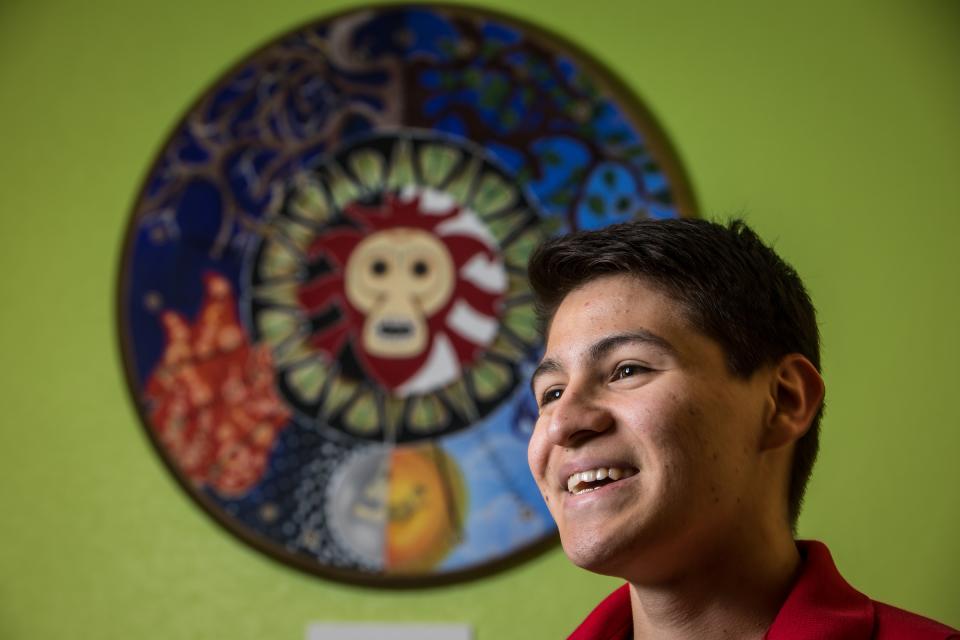 Electrical engineering major Juan Cardenas is pictured in the offices of the School of Transborder Studies on ASU's Tempe campus, where CAMP students meet once a week. Photo by Charlie Leight/ASU Now

This year, CAMP students attended two leadership conferences, one in New Mexico and one in California. For many, it was their first time on a plane and their first time traveling outside Arizona.

“That was an excellent opportunity,” said CAMP student adviser (and founder of DREAMzone) Davier Rodriguez. “And I got to spend time with students, not just sitting in my office talking about academic stuff — but talking about things like leadership and the philosophies behind it.”

Such discussions are one of Cardenas’ favorite things about the program. Rodriguez and Szkupinski-Quiroga “are always here for us with open arms,” he said.

CAMP serves approximately 2,400 migrant student participants annually, with more than 50 programs in 15 states. Each year, every program chooses one student to apply for an internship in Washington, D.C. This year, Urias was chosen for the position and will be spending two months in the nation’s capital, working alongside Arizona Congressman Raul Grijalva.

“He’s from Tucson, so we’re kind of from similar areas,” Urias said. “So I’m really excited.”

When she returns in the fall, she plans to continue on a path toward a career in child counseling.

There are still spots open for the fall 2017 CAMP cohort. Those interested can send an email to asucamp@asu.edu or apply online at campscholar.asu.edu/application.

Top photo: Psychology major Dyan Urias pictured outside the Interdisciplinary B building on ASU's Tempe campus, where CAMP students meet once a week. Urias was chosen from ASU's CAMP group to spend two months as an intern in Washington, D.C. Photo by Charlie Leight/ASU Now