For this ASU grad, there’s no place like home 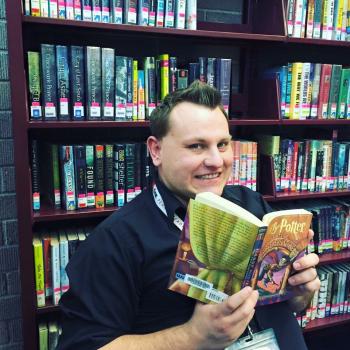 "Libraries are uniquely positioned to provide safe spaces for teens," said graduating ASU student Raymond Ceo. "However, not enough libraries have dedicated teen spaces. I want to change that by evaluating libraries and their communities and working to create equitable space for the teen populations." Download Full Image

Raymond Ceo believes in Arizona. He also believes in great cultural institutions, like marriage and public libraries. The Arizona State University student, who graduates this spring with a bachelor’s degree in English (Creative Writing) and who plans to become a librarian, almost left the state to pursue his degree.

“I had intended to go to another school,” he said. “I even had a dorm picked out and had accepted a scholarship.”

Ultimately, Ceo’s sense that his home state could make a place for him won out. He enrolled at ASU in 2006.

Our interview with him picks up there.

Question: What was your "aha" moment, when you realized you wanted to study in your field?

Answer: I have always been a writer to some extent. I was the editor of my high school newspaper for three years, I have written poems and short stories, and I even won an award for writing for the State Press years ago. Simply, I have always dabbled in it. But being a writer, and this degree, is just a stepping-stone for me. My ultimate goal is to become a librarian, which requires a master’s degree. While I love to write, I like the stability that being a librarian provides. Further, I like giving back to my community and what better way to do that than working in a library, where your community gathers to learn, connect and be entertained.

A: I started my degree in 2006. I left ASU for a few years. And then I returned, older, somewhat wiser, and certainly more mature. The biggest thing I learned in my now 11-year journey to getting my degree is that you are never too old to pursue your dreams, and that education is in fact a journey, and everyone’s path is different. I have come to learn to embrace all of it.

A: In 2006, when I started, Arizona was facing a same-sex marriage ban, and I wanted to work on the campaign to fight it. I have always believed in marriage equality because one day I wanted to be married. I am glad I went to ASU to fight that law. I was able to witness Arizona become the first state in the nation to vote down a so-called marriage amendment. Now that I am married to someone of the same sex, I think it was worth it to stay here and fight for it. Being married in my home state was important to me.

A: Naturally, Hayden Library has been good to me through the many phases of my academic life.

A: I intend to become a librarian. I have worked in libraries for nearly a decade and am in the process of deciding which library graduate program I want to go to. I’m looking forward to taking another step in my educational journey.

A: Libraries are uniquely positioned to provide safe spaces for teens. However, not enough libraries have dedicated teen spaces. I want to change that by evaluating libraries and their communities and working to create equitable space for the teen populations, and that’s how I would spend $40 million.

The Department of English of an academic unit of the College of Liberal Arts and Sciences.

Update: The team featured in this story, led by ASU Professor Darren Petrucci and Assistant Professors Chingwen Cheng and Paul Coseo, all from The Design School, took top prize in the University of Hawaii's "Make the Ala Wai Awesome" competition; in addition, the team was awarded the American Society of Landscape Architects' award for Excellence in Landscape Architecture. The winners of the intern... 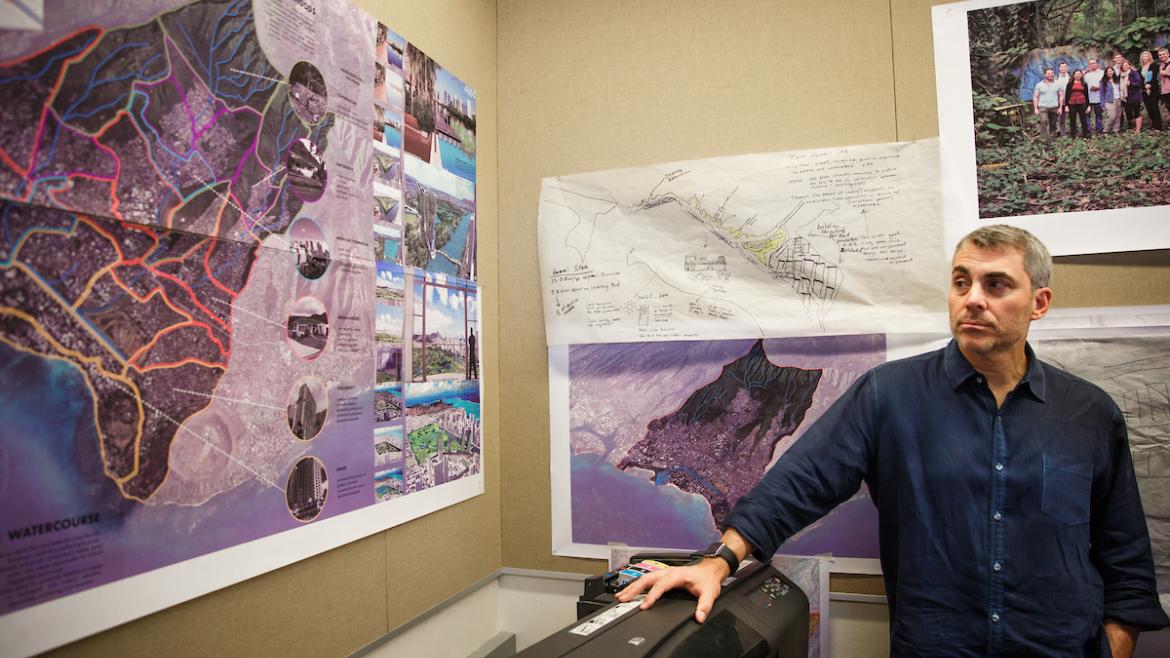 Update: The team featured in this story, led by ASU Professor Darren Petrucci and Assistant Professors Chingwen Cheng and Paul Coseo, all from The Design School, took top prize in the University of Hawaii's "Make the Ala Wai Awesome" competition; in addition, the team was awarded the American Society of Landscape Architects' award for Excellence in Landscape Architecture. The winners of the international student design competition were announced June 18 at the opening ceremony of the World Youth Congress, at the University of Hawaii at Manoa.

Hawaii faces a range of sustainability threats: The state can’t grow enough food; it imports 90 percent of its energy and water; coral reefs are disappearing; the islands are being overrun by invasive species; and because of global warming, residents are increasingly vulnerable to flooding, hurricanes and tsunamis.

It might seem like an unlikely pairing, but students from the desert have been enlisted to help.

“Phoenix is ostensibly an island, and the way resource allocation occurs is not much different than Hawaii,” said Darren Petrucci, a professor in Arizona State University’s Design SchoolThe Design School is an academic unit within the Herberger Institute for Design and the Arts and offers programs in architecture, environmental design, industrial design, interior design, landscape architecture, urban design and visual communication design.. If the Hawaiian Islands can become a sustainable, then “all of the other islands in the world can do it.”

In an example of interdisciplinary problem solving, ASU students and faculty from the Herberger Institute for Design and the Arts, the School of Sustainability, and ASU’s LightWorks energy center worked recently with a Hawaii public-private partnership network to find new answers.

The ASU teams developed a four-tiered strategy, focusing on flood mitigation, community education, economic health and overall resilience. They incorporated plans from wetland filtration on a municipal golf course to creating a boardwalk for flood control.

“The big idea of this project is to empower local neighborhoods to find their own solutions,” said Paul Coseo, an assistant professor in landscape architecture in The Design School. 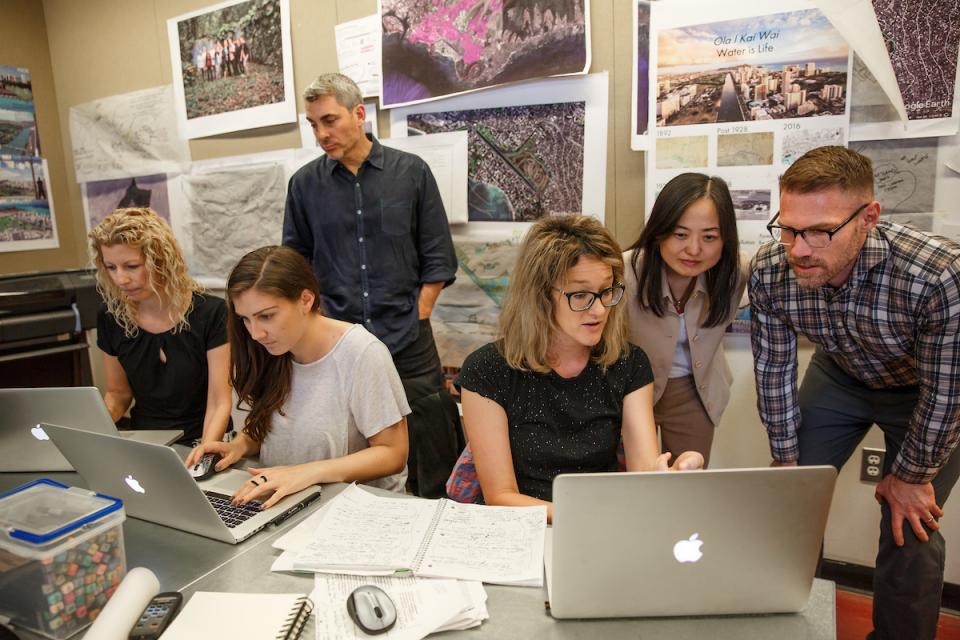 The three professors working with the Hawaii sustainability project give advice to students in the graduate design studios. Photo by Anya Magnuson/ASU Now

The project is the sort of thing that ASU has become known for. ASU has positioned itself as a pioneer of interdisciplinary learning and a leading center for entrepreneurship and innovation. The university was the first in the nation to offer a degree in sustainability and has been involved in partnerships including solar power and waste reduction. Also, the Herberger Institute pushes students to revitalize communities and transform neighborhoods.

“Designers don’t engage in problem solving the way an engineer might look at things because we always start with the human condition and how it engages with nature,” Petrucci said.

“If everyone did just a small intervention,” she said, “it could make a great impact.”

Many strategies could be planned within a year and completed shortly thereafter, depending on funding, Coseo said.

ASU’s involvement began when President Michael Crow met with Hawai’i Green Growth leader Celeste Conners. They, along with faculty and staff from LightWorks and the School of Sustainability, discussed a statewide initiative to achieve environmental, social and economic prosperity for future generations.

LightWorks enlisted help from The Design School, which turned it into a class project for graduate students in design and sustainabilty, to address climate change, water, food, energy and natural resources sustainability on the Ala Wai Watershed, an 11-square-mile boundary on the Hawaiian island of O'ahu. 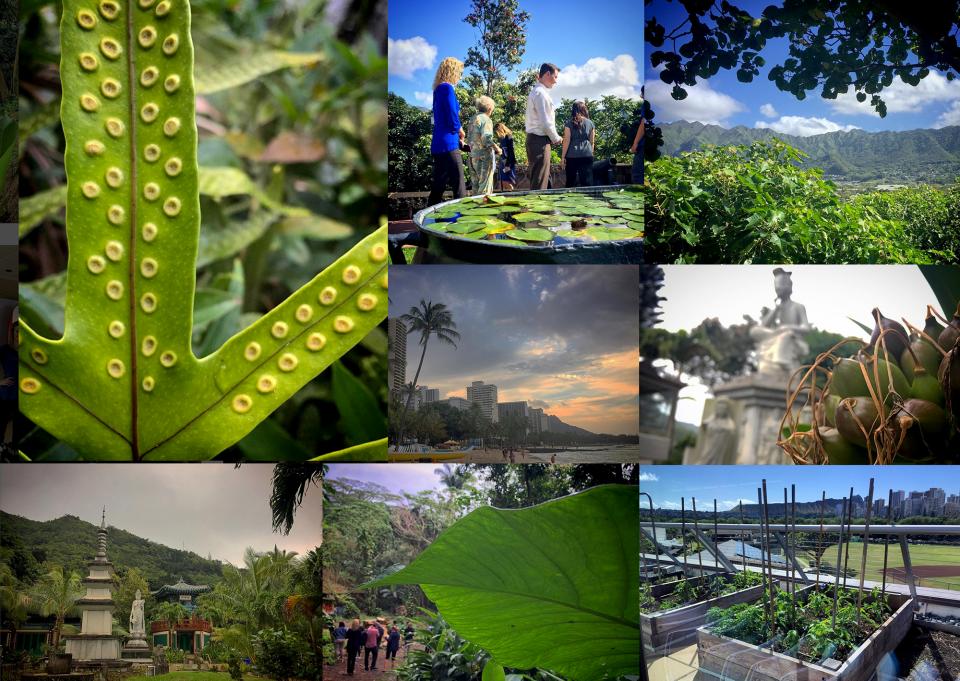 ASU teams visited Hawaii in the fall of last year and the spring of this year to listen to stakeholders and create strategies.

“We have a global economic system that’s based on a growth model, which is completely incompatible with sustainability,” said Leah Gibbons, a second-year doctoral student in the School of Sustainability.

People, in general, have become “disconnected from nature,” creating a “downward spiral," she said.

At this point, even a simple thing such as a rainfall can have negative consequences, said Chingwen Cheng, an assistant professor of landscape architecture at The Design School.

“Storm water runoff from the ridge flows downward and flushes silt, oil from cars and other pollutants into Waikiki Bay and contaminates the ocean, killing the reef,” Cheng said.

O'ahu's mountaintops receive about 150 inches of rainfall annually, and a particularly heavy storm could flood about 40 percent of the areas around the Ala Wai canal if something isn't done, according to the Army Corps of Engineers.

ASU’s teams hope their plan — which has been incorporated into a 36-page e-book and 10-minute video — will be implemented by Hawai’i Green Growth to make a difference.

“I feel fantastic knowing something we’ve developed as a class can make the world a better place," said Nicholas Knoebel, a candidate for Master of Landscape Architecture. "More habitable with fewer problems." 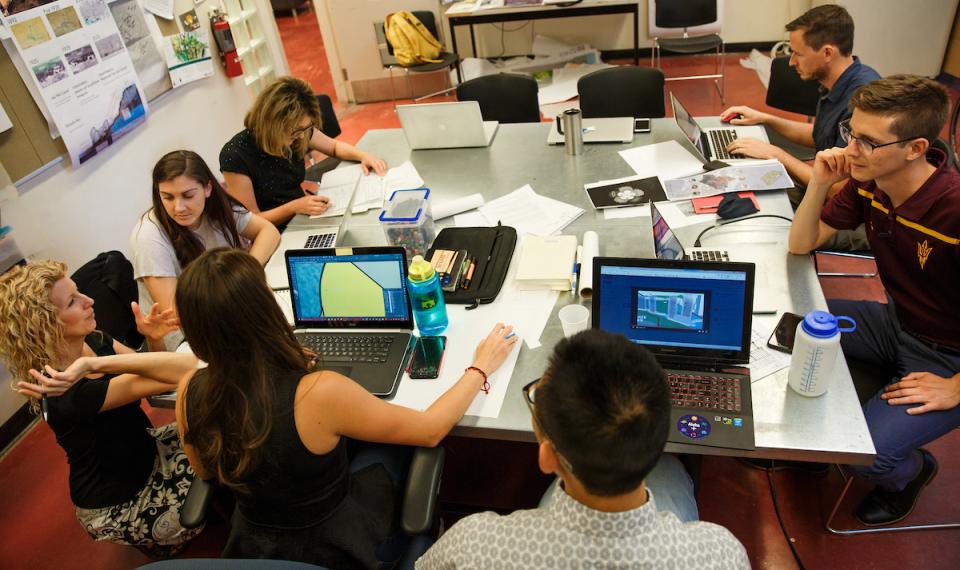 Seven of the graduate and doctoral students working on the sustainability project gather at their table in the graduate design labs on April 26. Photo by Anya Magnuson/ASU Now

Top photo: Darren Petrucci, a professor in ASU's Design School, looks at the display board of the project area on the Hawaiian island of O'ahu. Petrucci is also the coordinator for the Master of Urban Design (MUD) program and works with the landscape architecture studio. Photo by Anya Magnuson/ASU Now