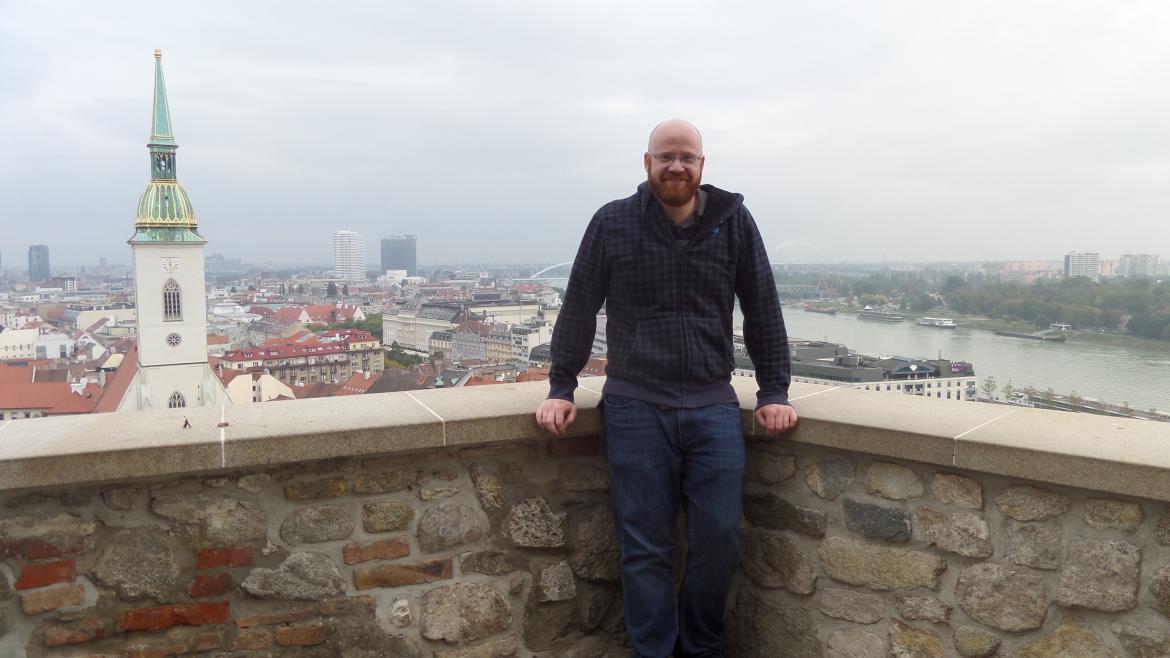 In a world often divided by ideological and cultural differences, social media has the ability to bring people together regardless of geographic location.

“Social media knows few borders,” said Jeremy Quist, a May 2017 graduate of the School for the Future of Innovation in Society’s Global Technology and Development master’s degree program.

Quist, who has a bachelor’s degree in political science, tested out the borderless nature of social media firsthand while conducting his master’s capstone research in Central and Eastern Europe about the effects of social media on transnational gay identity.

Social media has played a role in transforming and creating other transnational movements, Quist said, from global environmental advocacy to radical Islamist recruitment.

Choosing Central and Eastern Europe for the study wasn’t a random decision. The year before, Quist had participated in an ASU study abroad program in Romania.  While there, he saw some graffiti that, in his view, summed up the gay experience worldwide and planted the seed for his capstone project.

“It was two block characters, one with its arm around the other’s shoulder, with the words, ‘We two boys together clinging,’ a quote from a Walt Whitman poem,” he said.  “LGBT people have lived that way for a very long time — clinging to each other while facing outside opposition,” Quist wrote on his blog, wetwoboys.com.

Quist points out that gay identity is unique among identities, which makes it a fascinating subject to study.

“It’s not a nationality, race, an ethnicity or a culture, but it’s part of who you are,” he said.

During his capstone research, Quist spent three months traveling around the Czech Republic, Slovakia, Austria, Hungary and Romania interviewing gay men to learn whether they had feelings of attachment to other gay people across borders.

Transnational gay identity can serve as a way for the LGBTQ community to provide support to one another across borders in ways personal, social, cultural and political, Quist said.

“My research brings together levels of identity — national, transnational and gay identities — and discusses how they interact with each other in ways that I have not seen done elsewhere,” he said.

The five Central and Eastern European countries provided an interesting backdrop for the study, because several countries in this cluster ended communism and began transitioning toward democracy at the same time, Quist said. Homosexuality is legal in all five countries, but acceptance varies.

Working through LGBTQ organizations in each country, Quist was able to conduct 15- to 20-minute interviews with 57 English-speaking gay men. Even though the interviews were completely anonymous, the challenge of finding subjects varied from country to country, Quist said.

“My research shows that a transnational gay identity is forming, and it would imply that the future would only increase that trend as social media and other international interaction becomes even more pervasive,” he said.

This shows promise for a larger and more inclusive LGBT community across borders.

“The implications of what social media has done are massive,” Quist said. “Social media makes a real difference in real individual’s lives.”

The study provides a good foundation for further research, and Quist welcomes the opportunity to take the project to the next level.

“There’s a lot of room to grow from where I started,” he said. “The research is a case study of one particular region, but the principles involved are of potentially universal application. Research in other places would need to be done to demonstrate that.”

Ultimately, this research could help international LGBT organizations to be more sensitive to the cultural and national contexts of the areas in which they work, Quist said. “If that were to happen, I would consider it a pretty big win.”

“For the goal of inclusiveness to be reached, we need many Jeremy Quists out there doing solid, meaningful research on these questions and making important contributions,” said Gary Grossman, associate director for programs with the School for the Future of Innovation in Society, and Quist’s capstone mentor

Because of the policy and practical experience he gained through his master’s program, Quist might seek a position within government or with an LGBTQ rights organization.

“I’m casting a wide net right now,” he said. “Designing, executing and analyzing my own research project is something that will be valuable no matter what I choose to do.”

Director of Strategic Communications , School for the Future of Innovation in Society

Editor’s note: This is part of a series of profiles for spring 2017 commencement. See more graduates here.Ashton Grove knew early on what to focus on in college. Volunteering with the Phoenix Zoo while in high school helped steer Grove toward studying biology, and working with animals in some capacity became a goal that was clearly within reach. However, embracing change and new experiences at ...

Ashton Grove knew early on what to focus on in college. Volunteering with the Phoenix Zoo while in high school helped steer Grove toward studying biology, and working with animals in some capacity became a goal that was clearly within reach. 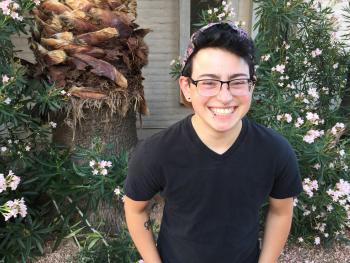 Ashton Grove is graduating from the ASU School of Life Sciences with a Bachelor of Science degree in biology. After graduation, Grove will continue to gain experience working with exotic animals. Photo courtesy of Ashton Grove Download Full Image

However, embracing change and new experiences at Arizona State University became an important part of college life. Many unexpected opportunities arose and they began to embrace new roles in society and on campus — roles that would push political boundaries, define personal goals, and even foster new friendships with trusted faculty members.

Grove, from Glendale, Arizona, will be graduating with a bachelor's in biology from the School of Life Sciences.

Question: Were you facing any specific challenges before you came to ASU, and did your college experience change those challenges in some way?

Answer: Before I came to ASU, I was struggling a lot with the role I wanted to play in our society, and my experiences in college have done a great job of teaching me about things that I want to help change.

A: While at ASU, there were a lot of opportunities for me to be politically active, and I discovered that I am able to participate in communities that are working incredibly hard to challenge systemic oppressions and dismantle them. I learned that living a politically active life is important to me.

A: I transferred to ASU because there are a lot of resources here, the science programs are incredible, and the small-town atmosphere of my previous school was negatively impacting my mental health.

A: My best piece of advice would be to never define yourself by your GPA. Grades are not a defining feature of who you are, and they are not an accurate measurement of your ability to learn or your ability to be an important person.

A: I studied and spent a lot of time on the third floor of the Student Services Building. The outdoor seating on the roof of the second floor is a really quiet spot.

A: I plan to spend the next few years gaining more experience working directly with exotic animals, as well as participating in activism for the underprivileged communities in Arizona, and continuing my job as an informal educator at the Phoenix Zoo.

A: I would use $40 million to tackle transgender health care in the U.S. There are so many trans people out there who do not have access to the care they need, mentally and physically. I would use the money to provide mental health resources, funding towards hormone replacement therapy and surgery, clothing and other life-affirming necessities to transgender folks in need.

Q: Was there a particular person, course or experience at ASU that inspired you in some way?

A: Dr. Sara Brownell is one particular person who has inspired me at ASU. She does incredible and necessary research into how best to make classrooms inclusive for students who might have needs different from those of the “normalized” student (or who the education system think the “normalized” student is). Learning about Dr. Brownell’s work validates students’ importance in a classroom, a perspective that I had not particularly been experiencing, and one that pushed me to take a more active approach towards my own learning.

Q: What obstacles did you face during your time here at ASU, and how did you overcome them?

A: I have faced multiple obstacles here at ASU. My depression and anxiety have made it incredibly challenging to pass my classes. However, in the past year, I have been able to manage my mental health in a way that enables me to spend more energy on school and have more discipline for my studying.

Additionally, I discovered that I wanted to physically transition and pursued that while I was here at ASU. There is a far way for ASU to go before they have comprehensive inclusivity, but I have been seeing a lot of trans students and queer faculty taking on the challenge that is changing the systems already put in place.

However, the student health care plan was instrumental in helping me feel positively towards my future.

Because of these two obstacles, my ability to succeed here at ASU was hindered, and I have had to repeat a lot of classes. But the faculty members I have found to form relationships with have been incredibly supportive in offering resources, reaching out, and providing support and opportunities. Their help and support is one of the main reasons I will be able to graduate on time.

Q: What are you looking forward to most after graduation?

A: I am looking forward to the time and energy I will now be able to spend on my hobbies and relationships, and on participating in more activism to spread acceptance and understanding.

Q: What is one really special moment or memory during your time at ASU that you will always remember after graduation?

A: I’ll always remember the time my partner and I kissed in front of the anti-gay protestors by the MU.