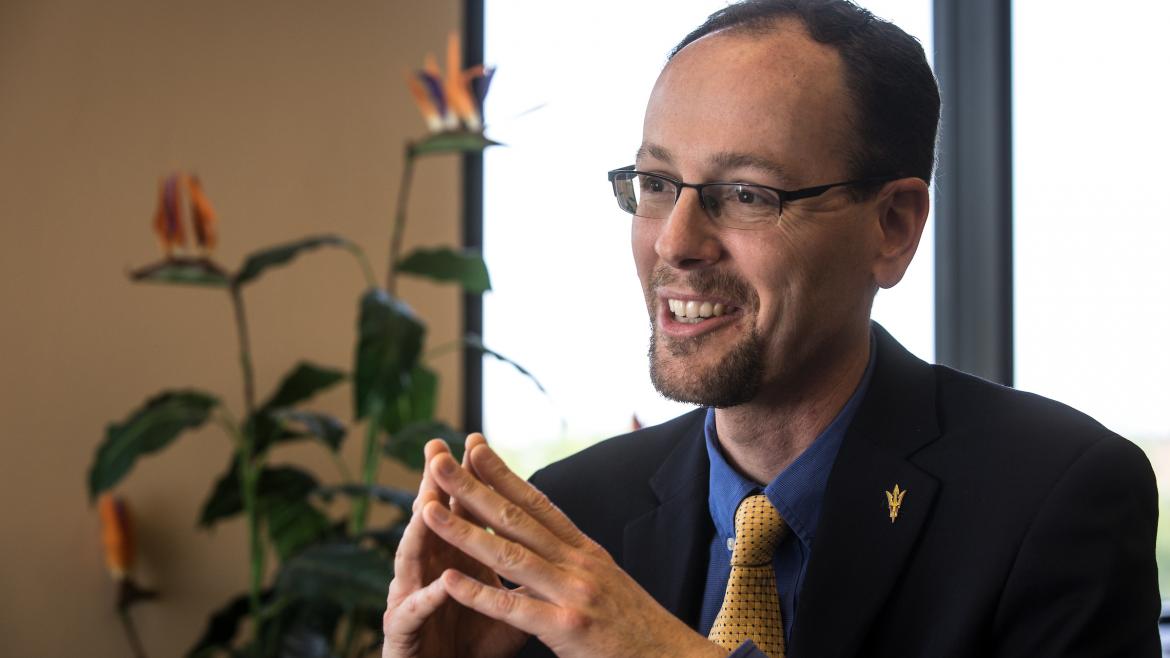 Todd Sandrin: 'We have all the ingredients right here'

When you’ve gotten used to waking up to your iPhone buzzing, asking Google every random question that pops into your head and relying on GPS to get around, it can be easy to forget how new it all is.

“We’ve come so far in developing technology so quickly,” said Todd Sandrin, that “the rate at which we can adapt to, comprehend and engage the solutions has plateaued a little bit.”

He wants to address that in his new role: dean and vice provost of ASU’s New College of Interdisciplinary Arts and Sciences.

“At New College and at West campus, we have an opportunity to rewire academia in the West Valley at a scale we haven’t seen before,” Sandrin said.

“When we think about changing the way the next generation thinks about and solves problems, ensuring they’re critical thinkers, adaptable learners, flexible lifelong learners, we’ve got all the raw ingredients right here.”

Sandrin said his biggest challenge will be thinking about how to “rewire the academic institution in a way that allows human adaptability to be at the rate which it needs to be to allow all of humanity to use those wonderful technological devices and ideas to their maximal benefit.”

He’s not intimidated by the challenge, saying it’s something ASU and New College have already begun to do.

Sandrin will succeed Marlene Tromp as New College dean. He joined ASU in 2008 as associate director of the School of Mathematical and Natural Sciences after being lured away from a faculty position at the University of Wisconsin-Oshkosh by ASU President Michael Crow’s “grand idea” for a New American University.

“The idea of aligning what we do as an institution of higher education with what the world, with what society needs really attracted me,” Sandrin said. “President Crow’s vision of that alignment — and how it should come about, and how quickly it needed to come about — were really exciting to me, so I wanted to be a part of that.”

Most recently, Sandrin has served as associate dean of New College. He also has served as a professor of microbiology and as director of New College Undergraduate Inquiry and Research Experiences, which he founded in 2011. As its name suggests, NCUIRE provides New College undergrads the opportunity to engage in meaningful research partnerships with faculty and other undergraduates across the disciplines.

"Todd reflects the qualities of leadership we sought and the breadth of experience to lead the college to develop dynamic new initiatives, enhance the high quality of education offered to our New College students and grow the student enrollment," said Mark Searle, executive vice president and university provost.

Sandrin has been pleased with his work. At NCUIRE, students have published alongside world-class faculty in top-tier journals, and they’ve attended and presented at internationally recognized conferences.

There is no GPA requirement to participate in the program.

“As long as the student can articulate to a faculty member [what they’d like to research], and the faculty member says the student has the fire in their belly … we believe that’s the most important criteria,” he said. “And that, I believe, is why we see outcomes like that.”

Sandrin has mentored several NCUIRE students, working on research that looks at how to optimize microbial identifying technology. He and his students were able to take the process of identifying a germ and what drugs it is resistant to from several hours down to a few seconds.

Several hospitals, including ones run by Banner Health and the Mayo Clinic, use the methods they’ve developed, and it wouldn’t have been possible without interdisciplinary collaboration; Sandrin and his students worked with statisticians, an area life scientists don’t generally use, to help improve their process.

Being a mentor to students is a rewarding experience, Sandrin said.“What excites me sometimes most is to see them doing work they never knew they could do,” because it is “work which leverages the intersection between disciplines, that space where, for whatever reason, people have not yet looked for solutions.”

But for faculty and students at ASU, he said, it’s second nature.

“It’s what we do as an interdisciplinary group of scholars across ASU and certainly in New College,” he said. “It is what we’re trained to do.”

Sandrin said he is looking forward to serving as dean of New College but points out there are seven total colleges at ASU’s West campus, each of which complement each other and allow for collaboration across the disciplines.

“We have the interdisciplinary perspective, we have the expertise, we have the faculty who are committed to doing this on all fronts, and we have students that we are looking forward to serving.”

To learn more about New College and its 70-plus degree programs, click here.

Capstone presentations — the culmination of four years’ education in a project that demonstrates the breadth of hard-earned knowledge — are always nerve-wracking. Getting the display right, the demonstration without a hitch and the tie in a perfect Windsor knot all strain student nerves.Now try doing it from 2,000 miles away.Arizona State University’s undergraduate degree in electrical eng... 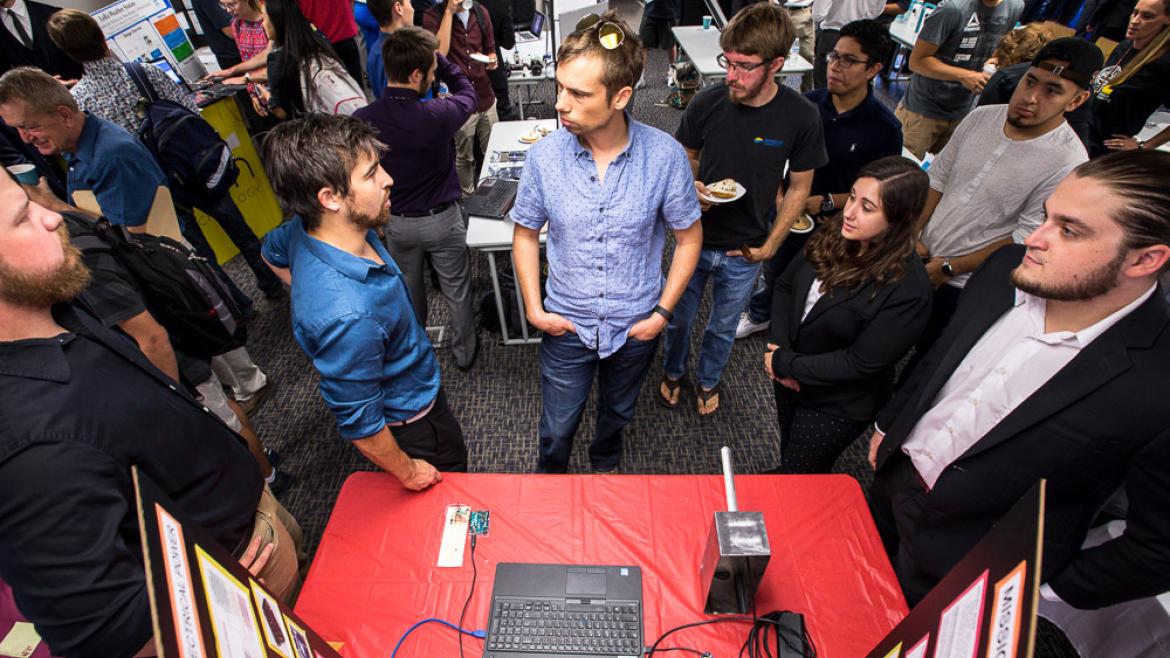 Capstone presentations — the culmination of four years’ education in a project that demonstrates the breadth of hard-earned knowledge — are always nerve-wracking. Getting the display right, the demonstration without a hitch and the tie in a perfect Windsor knot all strain student nerves.

Arizona State University’s undergraduate degree in electrical engineering is the first accredited program that is completely web-based. The first cohort of online students gave their capstone presentations Friday, along with all the other seniors.

The onliners (as they’re calling themselves) were easy to spot in the crowded room. Nobody stood around their display tables. Seventy-inch screens presented their projects. Team members interacted with visitors via videochat on laptops.

While hearing them over the hubbub in the room was difficult, their audio and video feeds worked well. (Next year, the onliners will be in a separate room.)

Team Cavalry presented the Calvary Band, a wearable device for police officers that detects the sound of a gunshot and automatically initiates a call for backup. Team members were in Seattle, Los Angeles, Phoenix and Lancaster, New York.

Heather Green, in Seattle, with her black cat on her lap, explained how they brought the project together literally coast to coast.

“Our team has met twice a week on Google Hangouts to update each other on our progress, issues and upcoming tasks to keep us on schedule,” Green said. “It's worked out really well! When we were fielding project ideas, our locations were something we kept in mind. (Team member) Rob (Crowe, in New York) thought of this idea initially, and it's been almost no issue to implement our design, even though the team is scattered. Companies do this sort of thing all the time now, and I think now that's going to be part of the college experience.” 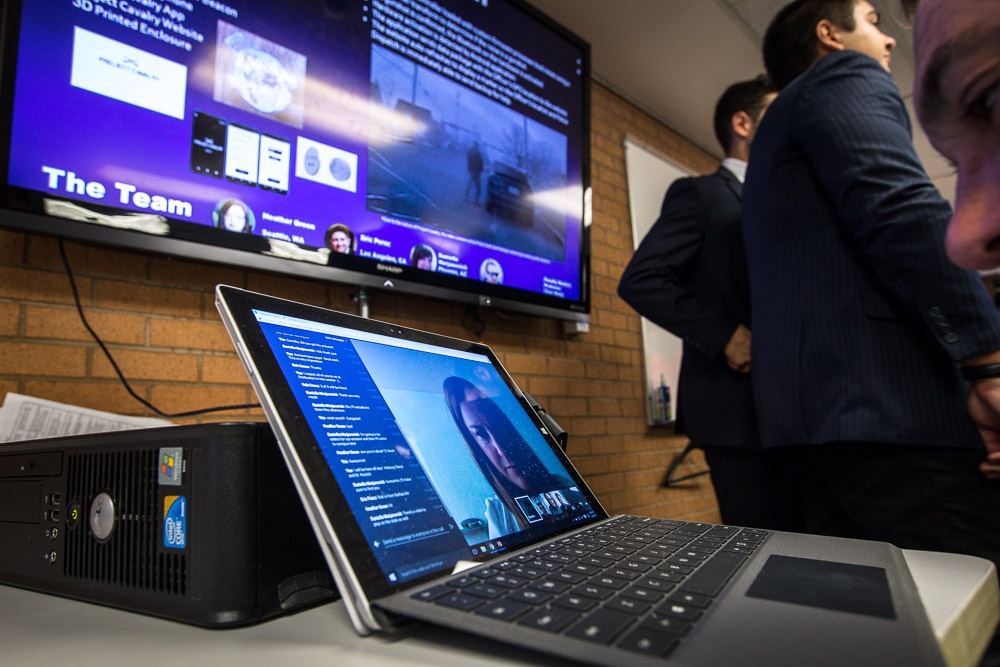 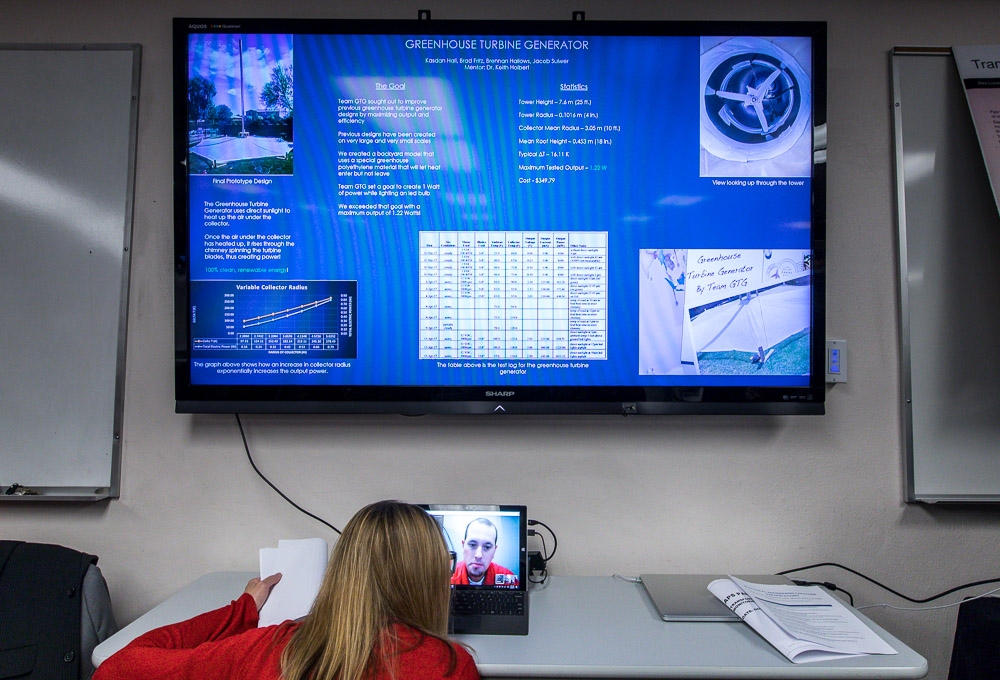 Julie Castro, research advancement administrator in ECEE, talks with Brennan Hallows in Price, Utah, about his team's greenhouse turbine generator. Hallows and his team created the generator to provide clean and renewable power. For the first time, the capstone presentations included those from ASU Online students, with six teams making remote displays and holding video interviews. 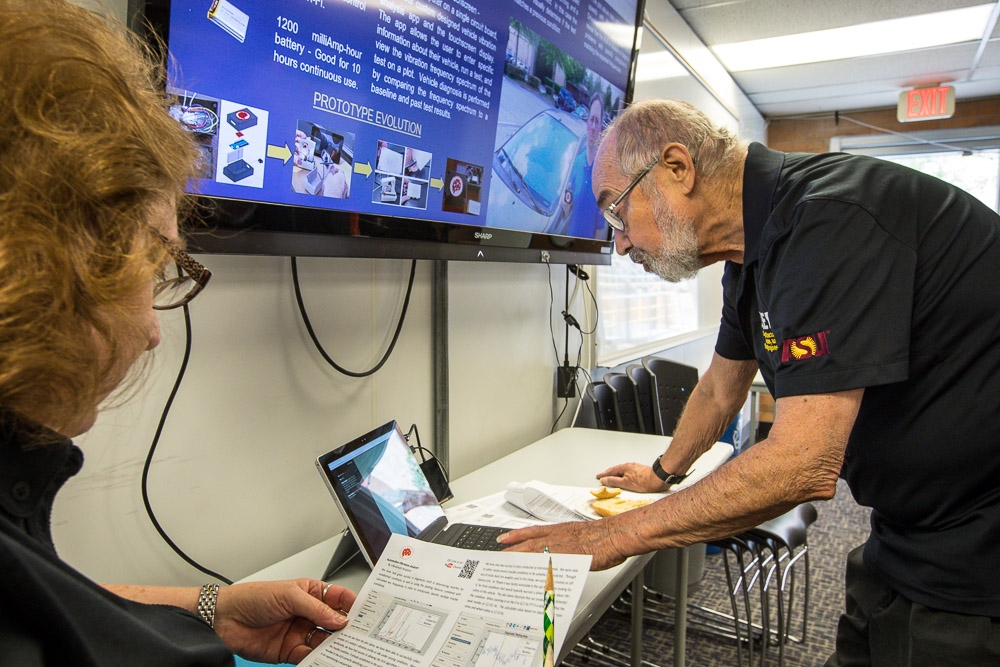 Professor Emeritus Joseph Palais talks with members of Vibrainium Analytics through video chat. Cheryl McAfee, with ECEE, looks over the group's results on left. The Vibrainium members designed a sensor and tools to monitor vehicle vibrations and alert users of problems before they lead to costly repairs.

Brennan Hallows, a senior in Price, Utah, was part of a team that built a greenhouse turbine generator. It uses direct sunlight to heat up air, which rises, spins a turbine and creates power. His team was spread between Iowa, Utah and two members in Surprise, Arizona.

The project was difficult, Hallows said, but they powered through it.

“We met multiple times a week,” Hallows said. “The project was constructed in Arizona. Me and Brad (Fritz, in Iowa) worked really hard on the design and calculations while the other two members did the construction and testing. It was a team effort that turned out successful.”

Because it is the first year remote electrical engineering majors presented their projects, there were hiccups.

“There have been a lot of challenges with today's presentation, but we expected the unexpected, because we're the first group of fully online engineering students to do this,” Green said. “There haven't been any real surprises; it seems unclear that the video embedded explains our project, and that the video needs to be played in order to get that explanation. I know (organizers) are talking about putting onliners in a separate room next time, so the background noise isn't so overwhelming to communication.”

Hallows said he realized his sales acumen dims with distance.

“The presentation is very difficult remotely,” Hallows said. “I am a much better salesman in person! It would be much easier to talk about the project in person, but ASU has done a very good job of making it as good as it can be from a remote location.”

Top photo: Attendees listen to the presentation of Project Phoenix at the end-of-the-year Capstone Electrical Engineering Senior Design Projects on Friday. Project Phoenix designed a CubeSat system that can produce thermal images of major cities, to study their heat-island effect. Sixteen teams, half in the morning, presented their senior projects, with six of them being done by online students. Photo by Charlie Leight/ASU Now