It’s often a course, research experience or personal experience that drives students into one field or another. But for Jorge Ramos-Holguín, a recent graduate of Arizona State University’s Environmental Life Sciences PhD program, his interest in the environment started much sooner. 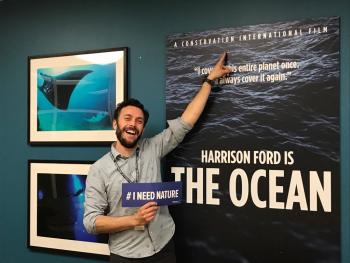 Jorge Ramos-Holguín, a graduate of ASU's PhD program in Environmental Life Sciences, has launched his career working with Conservation International. He is a manager of the Marine Climate Change team with the Center for Oceans. Download Full Image

When Ramos was a teenager in Ciudad Juárez, México, his father gave him a book titled “El Gran Libro Verde,” by Fred Pearce. A section in that book about greenhouse gasses sparked his interest in ecology — something that only grew stronger as time went on.

“There was a chapter about how the accelerated greenhouse gasses were already affecting our planet. It was illustrated with a planet Earth and a very hot thermometer and a sad or worried face,” recalled Ramos. “I still remember that image, and I’m sure it was at that moment that I wanted to keep learning about how that effect will impact our planet.”

Ramos said he chose to study at Arizona State University because the ecology and sustainability scientists are among the best in the world. He studied wetland ecosystems, and people would often ask him, “Why did you choose an institution in the desert to study wetlands?” His answer was that the best water resources research, including that where wetlands play an important role in cities, is done in areas where water is needed most.

During his time at ASU’s School of Life Sciences, Ramos pictured himself getting involved in academia, possibly as a professor or full-time researcher. While he enjoyed his time teaching, particularly teaching undergraduates about ecology, outreach and science communication events with the general public, his career took him in a new direction — one that he is passionate about.

Now, he is the manager of the Marine Climate Change team inside the Center for Oceans at Conservation International in Washington, D.C. He is managing the Blue Carbon Initiative, leading the International Blue Carbon Scientific Working Group, and globally supporting both coastal adaptation and mitigation projects in the Americas division.

Answer: Actually, just two weeks after my PhD defense, I started a permanent, full-time job with Conservation International! I have been in D.C. since March and just four days after graduation, I will be flying to Costa Rica for a workshop on climate change mitigation and adaptation in Latin America countries. I know, tough job!

A: I would create new adaptation strategies for coastal communities that are susceptible to the impending effects of climate change. More than half the people in the world live relatively close to oceans. We have to think about how they can adapt to dangerous and more frequent extreme events in the future.

A: You have to be able to work with others. Be a good listener. Be a good teammate. Be honest. Overall, just be a good colleague. ASU seems like a big place but everyone knows everyone, just like in the outside world. If you are able to successfully interact at ASU and its diverse group of people, you are gaining a skill much more important than a 4.0 GPA.

A: Focus on ideas and projects worth writing about and actually sit down and do it! Work with others and write about the process of working with others, not only the outcome. It’s OK to be wrong; just make sure you figure out why you were wrong and find ways to pick yourself up and finish it. Also, enjoy your time at school! It’s the one time in your life you will have the most flexibility in allocating your time to both work and fun.

A: Going up the steps of LSE all the way to the top with friends!

Q: Was there a particular person, course or experience at ASU that inspired you in some way?

A: I will just say this and the people associated with a certain research trip will know what I am talking about: “Cuatro Ciénegas — jajaja.” If you want to know more about it, ask Dr. Jim Elser to give me a $500 Mexican pesos bill and I will tell you the story.

Q: What is one really special moment or memory during your time at ASU that you will always remember after graduation?

A: I will always remember how proud my committee was after my PhD defense and how they kept congratulating my parents. Completing a PhD was not just my personal achievement, it was a team effort that included support from my family, my committee and many friends.

Shaping her environment for excellence

Editor’s note: This is part of a series of profiles for spring 2017 commencement. See more graduates here.Southern California native Alexandra Norwood found herself out of the Phoenix summer heat and in the cool climes of Iceland studying Vikings and 15th-century sod houses the summer after her freshman year at ASU.“I wanted to study anthropology and planned to be an archaeologist, which was s...

Research , The College of Liberal Arts and Sciences , School of Life Sciences

Shaping her environment for excellence

Southern California native Alexandra Norwood found herself out of the Phoenix summer heat and in the cool climes of Iceland studying Vikings and 15th-century sod houses the summer after her freshman year at ASU. 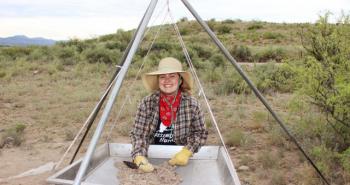 “I wanted to study anthropology and planned to be an archaeologist, which was spurred on by my father’s interest in archeology,” she said. “I liked science and history, so archaeology seemed to be a good blend of that.”

A casual conversation with a fellow student in Barrett, The Honors College about her interest in archaeology led Norwood to visit with Margaret Nelson, a vice dean in Barrett and President’s Professor in the School of Human Evolution and Social Change (SHESC).

A subsequent casual conversation with Nelson resulted in the first of three National Science Foundation-funded summer projects that Norwood would participate in during her time at ASU. The first was to work on the research project in Iceland. The next two projects were NSF Research Experiences for Undergraduates — a summer field school in New Mexico studying a Native American pueblo excavation and the Summer Undergraduate Research Fellow in Oceanography Program in Rhode Island working on ocean core sediments from the South Atlantic and Indian oceans.

For her last research trip over spring break, Norwood traveled to South Africa to work on SHESC Director and President’s Professor Kaye Reed’s project at the University of Cape Town cataloguing animal fossils from a place called Geelwal Karoo. 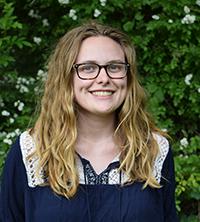 “My first year at ASU, I started working with Professor Mike Smith in the Mesoamerican Archaeology lab at SHESC and became part of a long-term, large NSF-funded project — ‘Service access in premodern cities’ — which looks at historical and archaeological cities and how different people had access to services across cultures and history,” Norwood said.

This research gave her a first publishing credit and provided a “home” for her four years at ASU.

“I’ve spent more time in the Meso lab than in any apartment that I have had during the last four years. I’ve even had pizza delivered there late at night,” Norwood said with a laugh.

This summer, Norwood will stand in the plaza of the pre-Columbian city of Teotihuacan, one focus of the Meso lab research, for the first time — the subject of her honor’s thesis with adviser Smith on formal open space and governance in premodern cities.

Another casual visit to the planetarium at ASU’s Marston Exploration Theater connected her to the School of Earth and Space Exploration’s Geological Sciences, and she added a second major to understand the complex methodologies and geological context of archaeological sites.

Along the way, Norwood was president of the Undergraduate Anthropology Association for two years and presented at the internationally attended Society for American Archaeology meeting and the ASU SHESC Undergraduate Research Symposium, as well as the ASU Institute of Human Origins’ science workshop. She has also found time to volunteer at the Arizona Natural History Museum, Pueblo Grande Museum and Barrett Page Turners, reading with elementary school students at the Tempe Public Library, and of course, maintained a 4.0 GPA. She worked as a student assistant at the Institute of Human Origins (IHO) during her junior and senior years and was the primary web editor for IHO’s AskAnAnthropologist.asu.edu website.

Norwood is also a double CLAS Dean’s Medal awardee from SHESC and SESE for 2017 and received a coveted NSF Graduate Research Fellowship, which provides full funding for three years at any university in the U.S. to pursue her graduate degree.

Answer: I took SHESC Foundation Professor Curtis Marean’s class in hunter-gathers. In the first lecture, he talked about his theory for the great human diaspora. He spoke about the first humans who went to Australia, 50,000 years ago, standing on the southern edge of the Asian continent and looking out to sea. He said that those humans were like us in their mental capacity and in their capacity to engineer and imagine, as we do. They could not see any more land but had to imagine that there was land out there and take the initiative of building a boat and going out to find it. They were explorers of the unknown like we still are today. Inspirational! I then took his class in zooarchaeology, which sparked my interest in understanding the environment, and the rest is history!

A: I took a socio-cultural anthropology class — Humans and the Environment — with SHESC Assistant Professor Shauna Burnsilver, who is an ethnographer. I had taken a lot of intensive science classes about the human-environment relationship. But this class was about human resilience, the way that humans perceive their environment, and environmental challenges and human adaptability to them. It was a good convergence of two ways of understanding these relationships — giving me a more holistic perspective by combining both the science and the messy way that people live in their environment.

A: ASU’s anthropology program and the Institute of Human Origins have the most excellent reputations.

A: I will be attending the University of Michigan in their doctoral program in biological anthropology, which means doing paleoecological research to understand the environmental context of human evolution, with plans to do fieldwork in Kenya.

A: I would fund science and research on combating climate change.