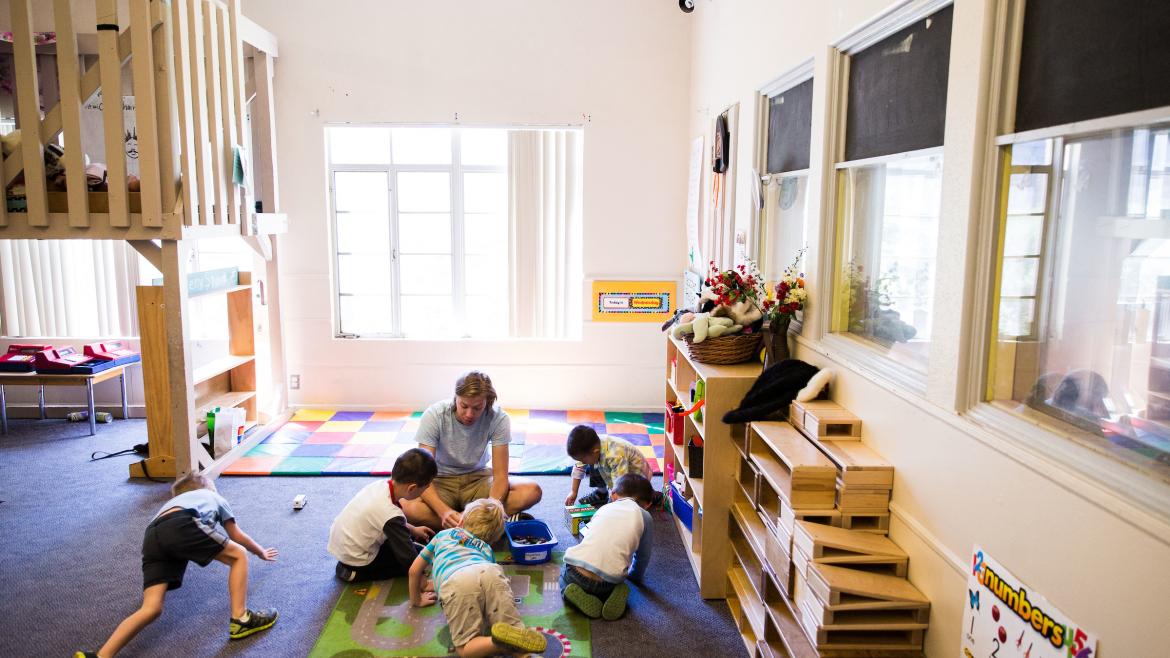 Launched in 1942, one of the oldest child centers in the state still going strong

The wood-burning fireplace is now a reading nook and the once-bare walls are covered with bright posters, but the Child Development Lab at Arizona State University is much the same as when it started 75 years ago.

In the past eight decades, thousands of children have sat on the floor, tended the garden and played with blocks inside the walls of the Center for Family Studies, which houses the lab on the Tempe campus.

The Child Development Lab started — and remains — a place where the professionals directly interact with the kids, according to Robert Weigand, director of the school and senior lecturer in the T. Denny Sanford School of Social and Family Dynamics.

“That’s the idea behind the founding of lab schools — you can’t learn to work with kids without being with kids,” he said.

“You can’t learn how they think, how they behave or how your behavior will influence their behavior unless you’re with them.”

The lab serves three purposes: a full-day, early-childhood education experience for children; a research facility on children’s development; and a place for future professionals to train.

The lab is probably the oldest continuously operated early-childhood center in Arizona, said Weigand, who has been researching the history of the lab and found some old newspaper articles and photographs.

The building, completed with Works Projects AdministrationThe Works Projects Administration was a federal agency that employed millions of people on public works projects, including buildings and roads, from 1935 to 1943. money, was finished in 1942 and was called the Home Management House and Nursery School. The lower level was for the nursery school and the second level had bedrooms and a kitchen, where home economics majors lived for a semester while they learned to “keep house.” The second level now houses the Graduate Student Association. 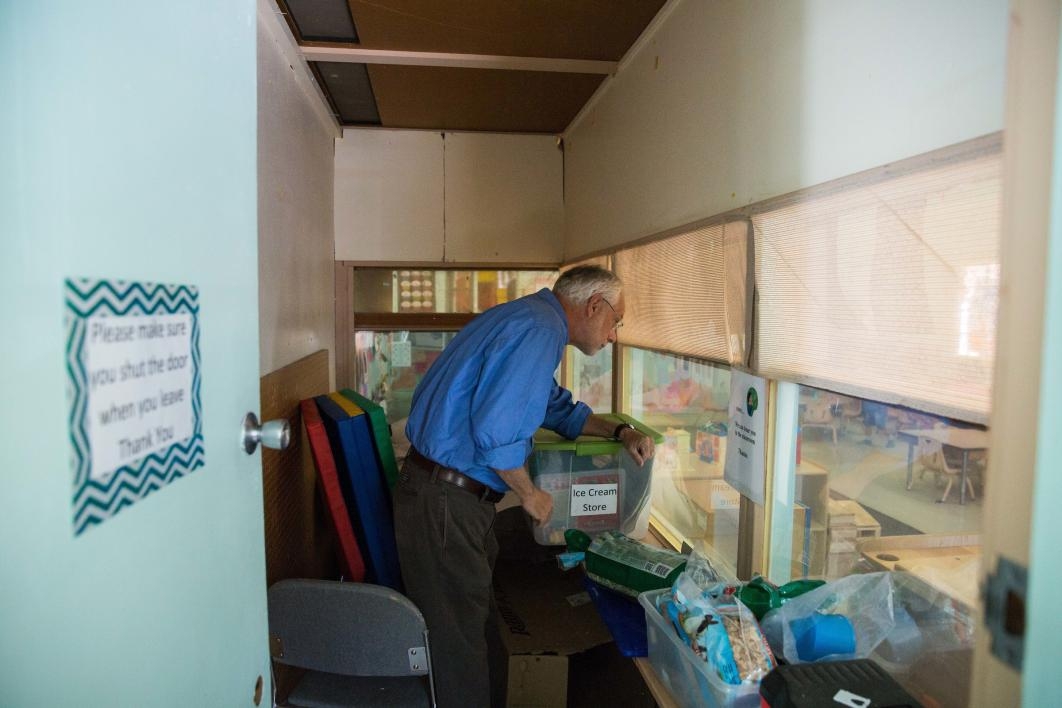 Robert Weigand, director of the Child Development Lab, watches a class from one of the observation rooms, which are original to the 75-year-old building. 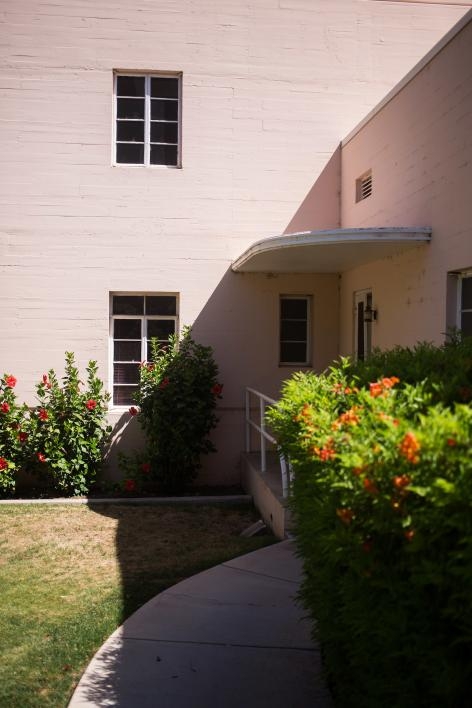 The Child Development Lab was called the Home Management House and Nursery School when it was built in 1942. The lower level was for the nursery school and the second level had bedrooms and a kitchen, where home economics majors lived while they learned to “keep house.” The building was made of concrete poured into wooden frames, and the imprints can still be seen on the exterior. 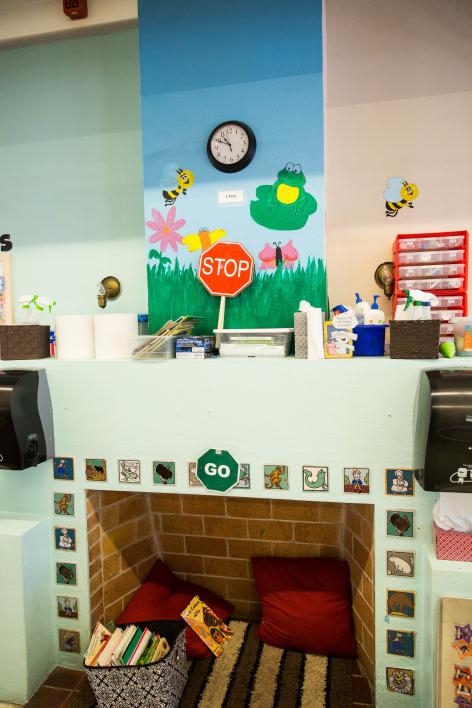 Many original features in the school are intact, including the fireplace, which is now a reading nook, and the hearth tiles, which depict children and animals. 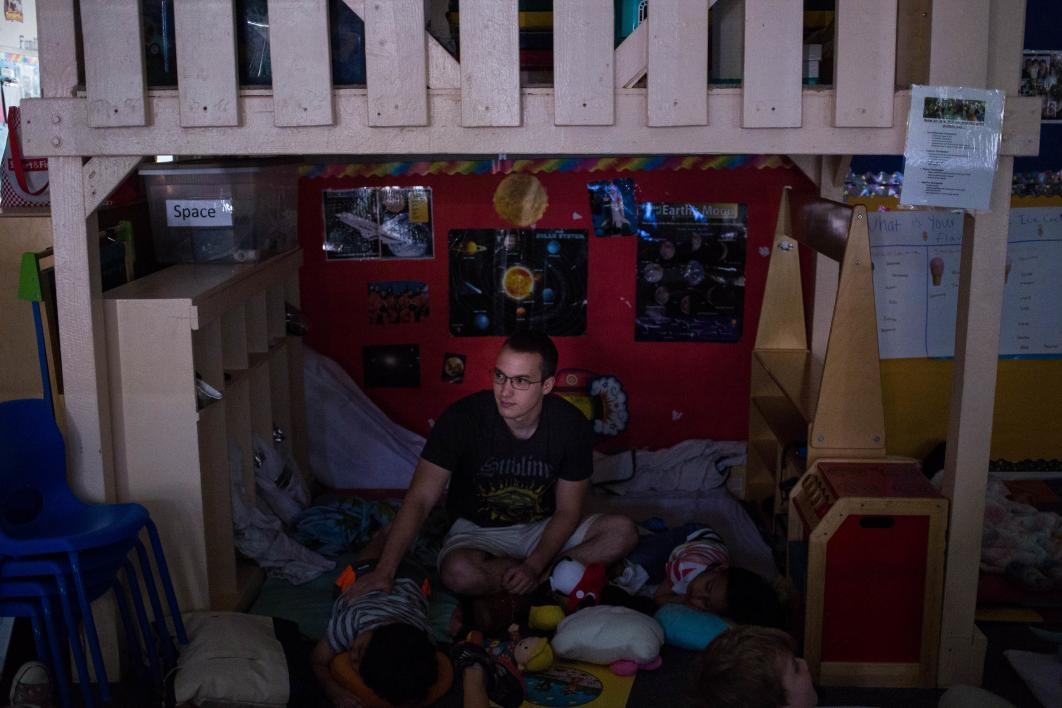 Ben Derdich soothes kids as they nap in the Child Development Lab. Derdich, a sophomore, works at the lab and was a student there when he was 3 years old. 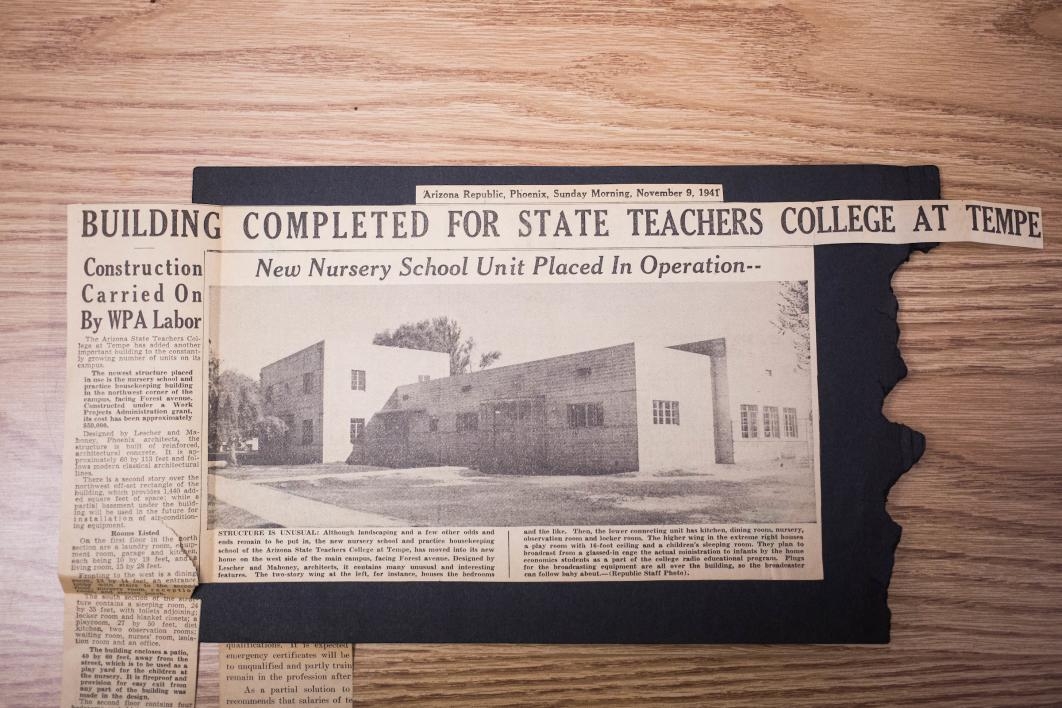 A 1942 article in the Arizona Republic announces the new building at Arizona State Teachers College. The article contains a curious description of the nursery: "They plan to broadcast live from a glassed-in cage the actual ministration to infants by the home economics students as part of the college radio education program." 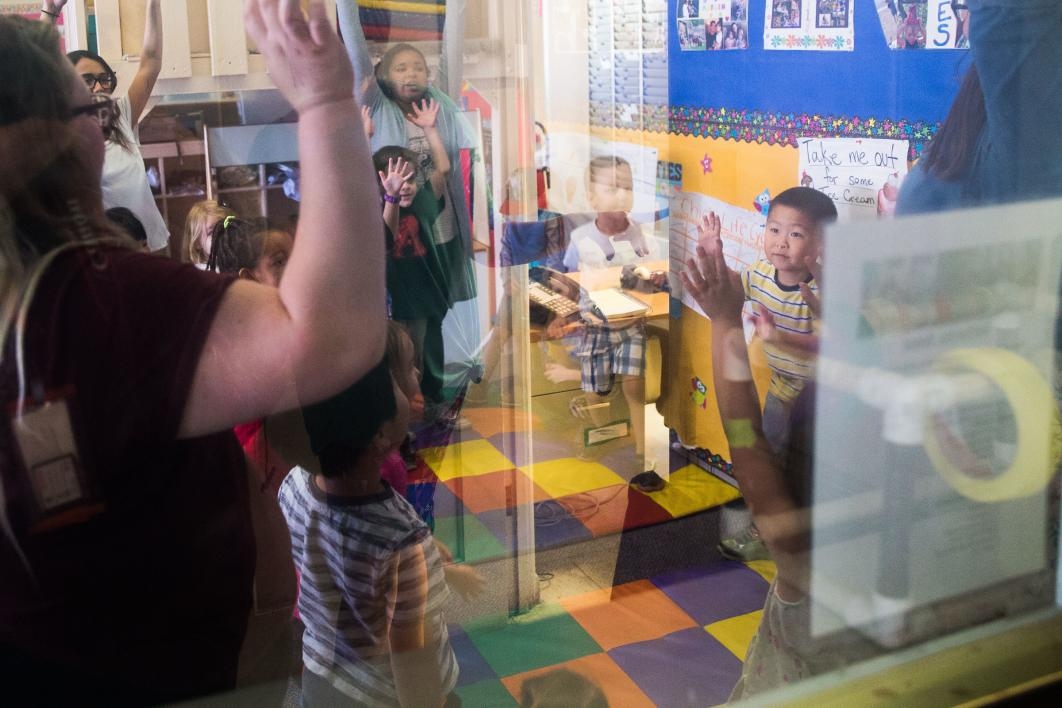 Children put their hands up and celebrate at circle time at the ASU Child Development Lab.

Weigand isn’t sure exactly when, after the building was done, the nursery began accepting children, but he noted that the timing coincided with two movements — the influx of women into the workforce during World War II and the recognition at universities of early-childhood development as a worthy area of academic study.

“There was the ‘Rosie the Riveter’ child-care movement,” Weigand said. As women started taking over jobs from men who went off to war, leaders including Eleanor Roosevelt were concerned about “12-hour orphans,” when the children were left alone. So the Kaiser shipyards in Portland, Oregon, started one of the first child-care centers in the country, in 1943.

“Simultaneously, early-childhood programs were developing at universities around the country. They started in the 1930s and were starting to blossom, and most of them were related to schools of home economics,” like the one at Arizona State Teachers College in 1942.

The building itself, though it has been updated with air-conditioning, security and other amenities, hasn’t changed much. The fireplace still has the original decorative tiles with scenes of animals and children, and each classroom still has an observation booth with one-way windows.

And research continues. When parents enroll, they know the lab is a research facility, but they must give permission for their children to participate in each experiment.

Many of the studiesThere are two child-development research facilities on the ASU campus: the Child Development Lab in the T. Denny Sanford School of Social and Family Dynamics, which started in 1942 and is a full-time program; and the Child Study Lab, in the Department of Psychology, which was launched in 1972 and offers part-time classes for children age 15 months to 5 years. involve observing the children, but sometimes the kids are asked to perform tasks or answer questions. One cleverly designed study investigated collaboration. Two children had to cooperate in a task in order for both to access some candy, and if one wanted to have all the candy, neither would get it.

“There’s a lot of ingenious work going on,” Weigand said.

A center full of children also is the perfect place for future researchers and teachers to learn how to interact with kids.

“Some of the research assistants, when they begin their graduate studies, haven’t worked with kids before. If you’re a stranger and ask a kid to come out and play a game with you, how do you do that in a way that makes it more likely the kids will say yes?” Weigand said. 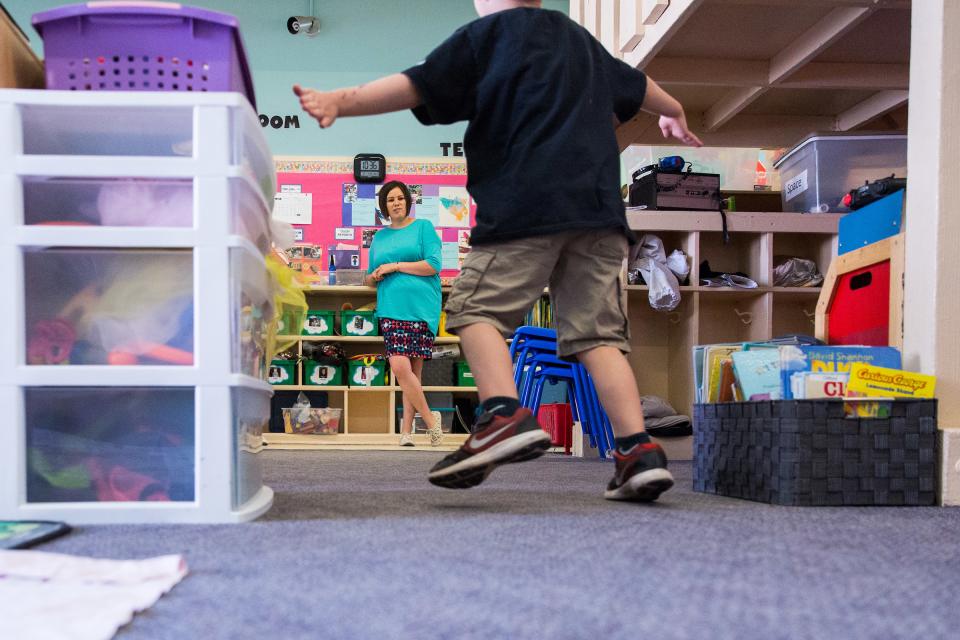 Getting up close with the kids is key, according to Courtney Romley, coordinator of the school.

“The thing we tell every adult who walks through the door is you’ve got to be sitting on the floor playing. You have to be at their level,” she said. “You can’t be an adult who is towering over them.”

The center, with about 50 children enrolled, has a waiting list, and spots are in high demand. The lab accepts children from 20 months old to pre-kindergarten, and the curriculum focuses on building social and emotional skills.

Because of the lab format, there is a low ratio of staff to students. Besides the full-time teachers, all of whom have master’s degrees, 25 college students work part-time in the center, as well as future teachers who are interns or on a practicum.

“This means our teachers aren’t constantly having to manage the classroom and can instead be a part of building those relationships with children, not only the adult-child relations but peer-to-peer relationships as well,” Romley said.

On a recent day, the children tended to the tomatoes and artichokes in the garden and squeezed lemons to make lemonade. Several student workers sat on the floor and patted backs during nap time. One of the aides, Ben Derdich, knew the drill well because he attended the lab as a 3-year-old.

“A few things are different now,” said Derdich, a sophomore majoring in tourism. “I remember where they do group time now there used to be cubbies where we could squeeze stress balls and have alone time.”

Derdich was walking on campus as a new freshman last year when Weigand recognized him and invited him to apply for a job. Now he helps during lunch and makes up games on the playground.

“When I walk in after classes, the stress is instantly gone. It’s not even like work — you get paid to play with kids,” he said.

Top photo: ASU student worker Sam Christus, a junior, plays with kids in the Child Development Lab, which was finished 75 years ago this spring. Photo by Deanna Dent/ASU Now

An Arizona State University semesterlong fusion experiment that paired artists from the Herberger Institute for Design and the Arts with scientists from the Biodesign Institute culminated in a one-night-only performance of “Science Exposed: Bringing Science to Life through the Arts.” Video of Science Exposed at the Biodesign Institute Video by Ken Fagan/ASU Now The evening kicked off with...

Married to the military 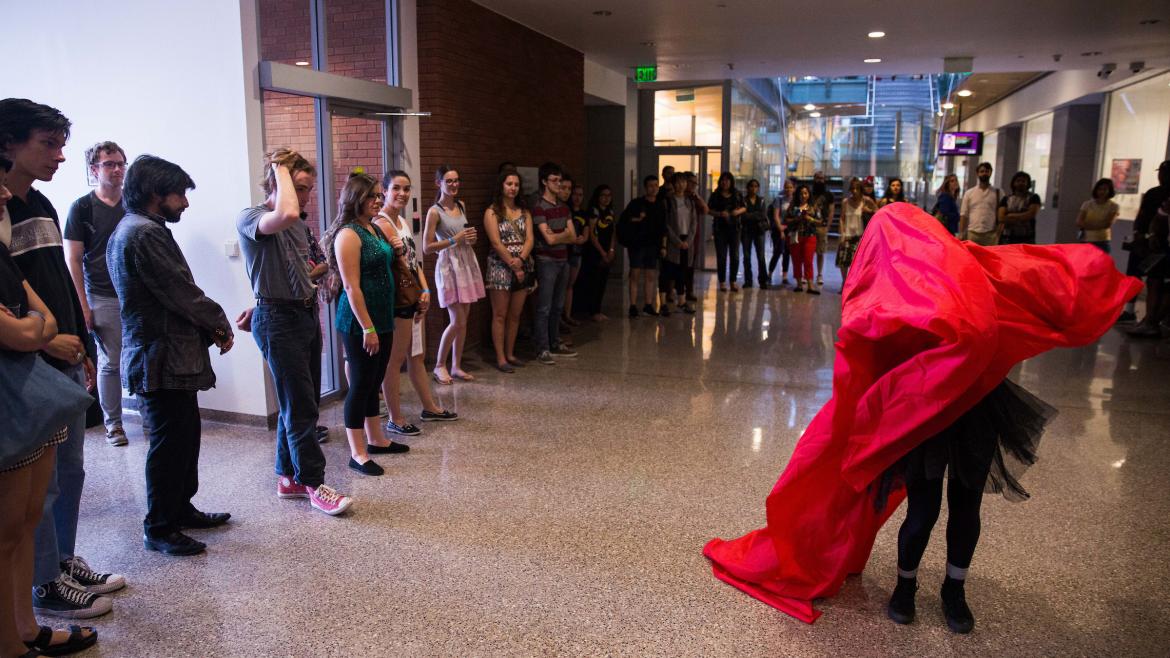 An Arizona State University semesterlong fusion experiment that paired artists from the Herberger Institute for Design and the Arts with scientists from the Biodesign Institute culminated in a one-night-only performance of “Science Exposed: Bringing Science to Life through the Arts.”

The evening kicked off with a chamber musical alchemy from two compositions by graduate students Zachary Bush and Stephen Mitton, as they interpreted the daily struggles of Alzheimer’s patients, caregivers and the scientists searching for a cure.

With neuroscientists Paul Coleman and Diego Mastroeni serving as personal guides to visits to brain banks and research labs, Bush’s “Cycles” explored the research cycle, where according to Bush “months or years of methodical effort to try and prove a hypothesis” all too often result in setbacks. “However,” he said, “the experiments eventually are complete and the triumph of discovery prevails” — but for only a short time, when scientists must confront the next challenge and start the whole process once again. Listen to it below.

Mitton’s “Stages” captured “the daily struggles of Alzheimer’s sufferers and their caregivers as the disease progresses through various stages over time.” Mitton’s evocative work focused on the emotional and physical toll on all affected, with a 12-note theme, representing the personality of an Alzheimer’s victim, undergoing subtle variations over the course of the performance and ending on a bittersweet note. Listen to it below.

Next, Herberger Professor Liz Lerman’s “Animating Research” project combined contemporary movement, dance and theater into a multimedia, immersive extravaganza. A dozen artists were paired with molecular virologists, evolutionary biologists and engineers to create expressive pieces that utilized and fully explored the Biodesign building space for both the audience and performers. 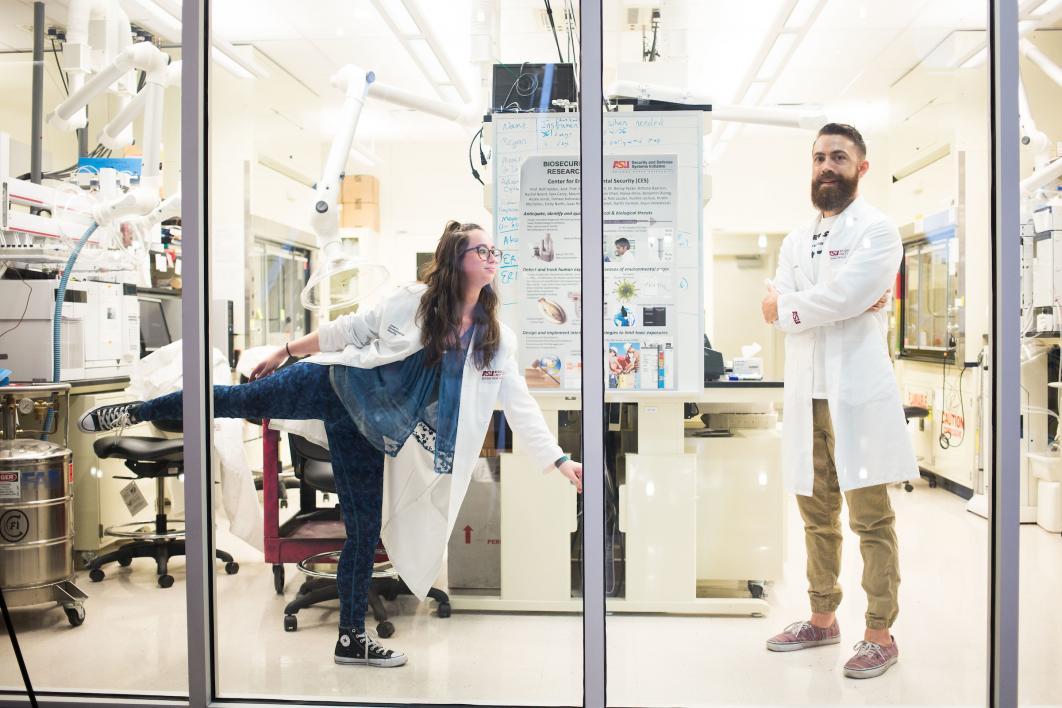 Dancer and management sophomore Theresa Wilkinson and plastic-pollution researcher Charles Rolsky pose for a portrait in one of the Biodesign Institute's labs on the Tempe campus Wednesday. Rolsky's research on plastic pollution was interpreted by Wilkinson and her classmates into a dance during the "Science Exposed" event. 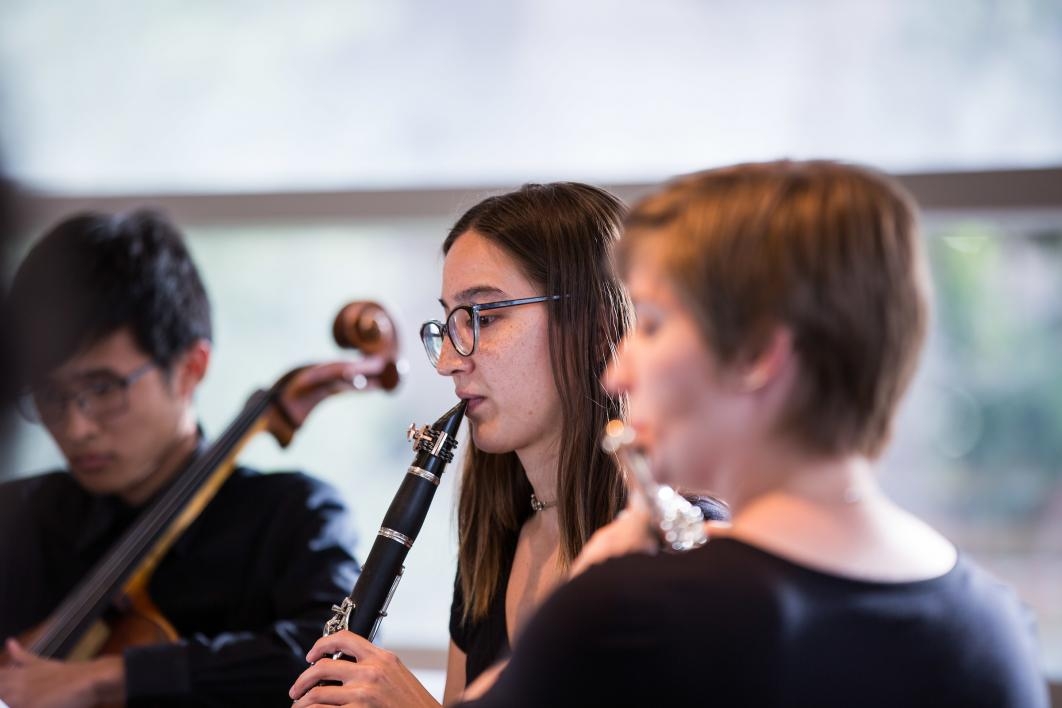 Musicians play pieces composed by Zachary Bush and Stephen Mitton, who both worked with neuroscientists Paul Coleman and Diego Mastroeni to understand the research that the music was exploring. 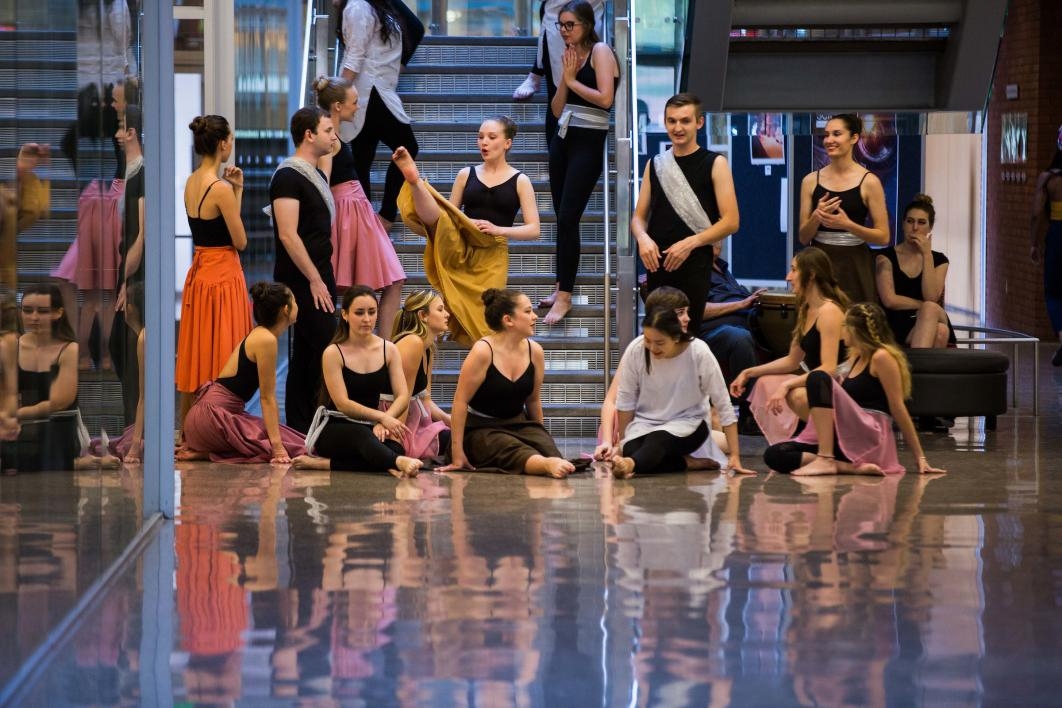 Dancers — as "viruses" — prepare for their performance during the "Science Exposed" event Wednesday. 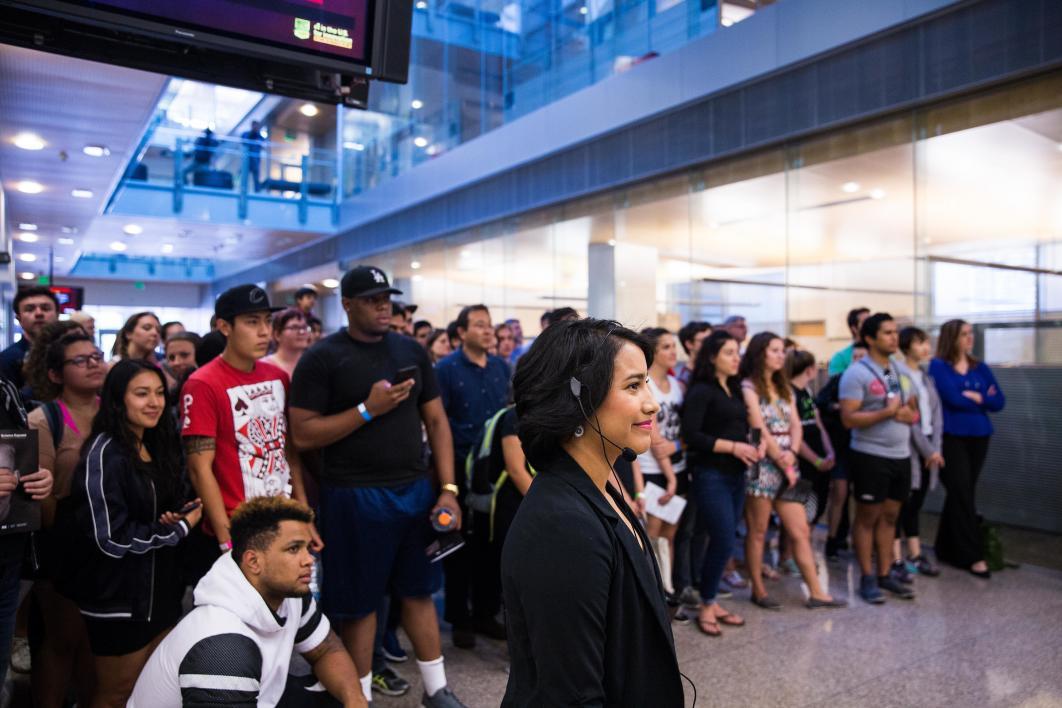 Attendees watch a performance of dancers during the "Science Exposed" performance Wednesday.

Lerman, a choreographer and MacArthur Fellow, led the group to create a dance collaboration, engaging tools of movement, performance and media with her students in her semesterlong “Animating Research” class. The expressive pieces evoked the science behind X-ray lasers and protein molecules, the role of cancer cells and our bodies, the spread of viruses throughout our ecosystem, the accumulation and environmental damage caused by microplastics, and using the leading cause of food poisoning, salmonella, as a “warrior” in the fight against cancer. Everything from classical ballet and modern hip-hop to interpretive dance and multimedia performance art installations were used in a creative expression to explain and engage the science.

The energy level and audience engagement steadily rose, and the evening culminated in an audience participatory dance, with groups acting out the roles of molecules to create an early diagnostic for cancer.

Top photo: An "atom" dances around the circle as it goes through a "red laser" during the "Science Exposed" performance at the Biodesign Institute on Wednesday. Photo by Deanna Dent/ASU Now