New findings by an Arizona State University engineer outline new advances in solar cell technology and point to the incredible potential of the material used to fabricate the cell — gallium nitride. 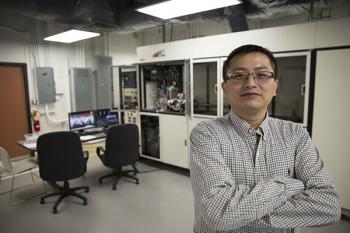 Electrical engineering Assistant Professor Yuji Zhao stands in his Metal-Organic Chemical Vapor Deposition lab on the Tempe campus, where he works with gallium nitride, a compound with unique properties. Zhao's research is focused on exploring gallium nitride's use in optoelectronics and high-power and high-frequency devices. Photo by Pete Zrioka/ASU Download Full Image

Gallium nitride is a unique compound, the properties of which make it an excellent candidate for use in optoelectronics and high-power and high-frequency devices.

“This material is remarkable and has such high potential,” Zhao said.

Zhao notes that some have called gallium nitride the next silicon — the ubiquitous material that serves as an integral component of many of our electronics, from computer chips and solar cells to transistors and integrated circuits. Gallium nitride could prove to be superior to silicon, and Zhao’s work is paving the way toward faster, more efficient and higher-powered devices of all kinds.

Zhao first began working with the material under pioneering researcher Shuji Nakamura of the University of California, Santa Barbara. Nakamura was awarded the Nobel Prize in Physics in 2014 for developing efficient blue-light-emitting diodes, which has enabled bright and energy-saving white-light LEDs.

While working toward his doctorate, Zhao focused on employing gallium nitride for use in LEDs and lasers. Now he’s taken the material far beyond optoelectronics, expanding its use for solar panels, power systems and more. His exploration of the material’s myriad uses has earned him support from both NASA and the U.S. Department of Defense.

“They have high hopes for this project. They seem to believe this is one of the most promising methods to achieve their goals,” Zhao said.

Currently, Zhao is prototyping the solar panels, and will begin thermal testing soon.

“It’s not a question of whether or not the panels will work under high temperatures, but of how efficiently they will perform,” Zhao said.

More recently, he received a $300,000 award from the DOD’s Defense Threat Reduction Agency, which supports basic research to counter weapons of mass destruction. Zhao’s work with the DTRA is focused on using aluminum nitride to create transistors that can withstand high voltage and resist radiation damage.

To test this, he and his team will construct a Schottky Diode — a basic two-terminal electric component — and place it in a radioactive environment, subjecting it to different types of radiation in varying doses and rates of exposure. This radioactive stress test will eventually cause degradation in performance in the diode. That’s when Zhao will turn to materials studies to determine how to improve the material’s resistance and performance.

The applications are far reaching, such as for more robust power electronics and communications systems, but the DTRA is primarily interested in military devices that would remain operational following a radiation event, Zhao said.

Zhao credits his success in attracting funding to refine materials and explore their uses to the work being done in his cutting-edge Metal-Organic Chemical Vapor Deposition lab on the Tempe campus.

“One of the key reasons I was awarded these grants was first my background with this work, but also the capability of the MOCVD lab,” Zhao said. “The equipment we use is industry standard, not different from what you’d find in a major company.”

The lab required an estimated investment of $800,000 to set up and became fully operational in fall 2016.

He envisions the lab as a truly interdisciplinary space, and not only because his research draws on the expertise of physicists, materials scientists and device designers. Zhao wants the MOCVD lab to be an unparalleled resource for all of the Fulton Schools.

His ultimate goal mirrors the Nobel Prize description: developing science and tech for the betterment of humanity. He’s chosen refining and improving next-generation materials, such as gallium nitride, as his avenue to do so.

“The idea is to benefit as much of ASU as possible, which will hopefully extend outside of the university as well,” Zhao said.

Two hundred and fifty million miles away, glistening on the Martian surface, sits a NASA rover fitted with a quartz cover made at Arizona State University’s Scientific Glassblowing Facility.Most people probably don’t think much about where the glass tools in scientific research come from. While beakers and test tubes are mass-produced and easy to buy online, custom pieces — including the cov... Two hundred and fifty million miles away, glistening on the Martian surface, sits a NASA rover fitted with a quartz cover made at Arizona State University’s Scientific Glassblowing Facility.

Most people probably don’t think much about where the glass tools in scientific research come from. While beakers and test tubes are mass-produced and easy to buy online, custom pieces — including the cover of a Mars rover — are created by an estimated 650 scientific glassblowers across the country at educational, industrial and government research facilities.

Dating back to the ancient Egyptians, scientific glassblowing has allowed researchers to advance technology and further their studies. Thomas Edison’s light bulb; Galileo’s thermometer; and early televisions, radios and computers were invented thanks to scientific glassblowing. Today, researchers use glass tools to collect air samples from volcanoes, precisely dilute chemical mixtures and mix gases in closed systems, among other activities.

Christine Roeger is a third-generation scientific glassblower who leads ASU’s facility. She is one of an increasing number of women entering the previously male-dominated field — bending the glass ceiling, so to speak.

“I belong to an American glassblowing society, and there are a lot more women now than when I first started. People don’t think women can do scientific glassblowing, but the female glassblowers that I have met are really good glassblowers,” Roeger said.

Over her 26 years working at ASU, Roeger has created a wide variety of customized products. For example, she made a glass birdhouse with a valved chamber that allowed a researcher to collect and analyze a bird’s respiration. 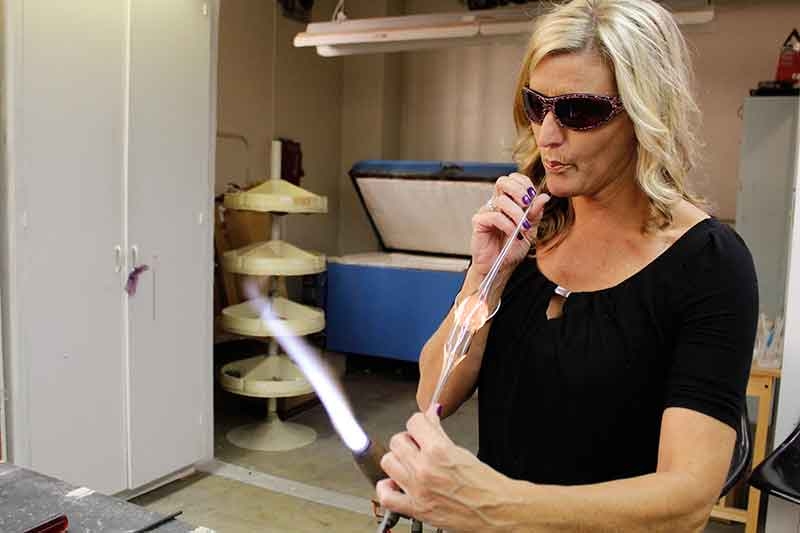 Christine Roeger is a third-generation scientific glassblower who started learning the trade from her father as a small girl. 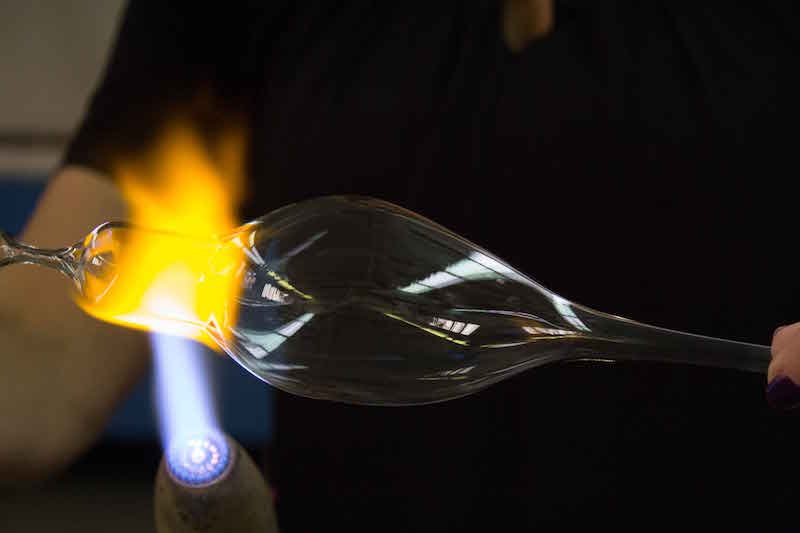 Roeger says no two jobs are the same and that she can create anything. "I have never said no to anybody," she said. 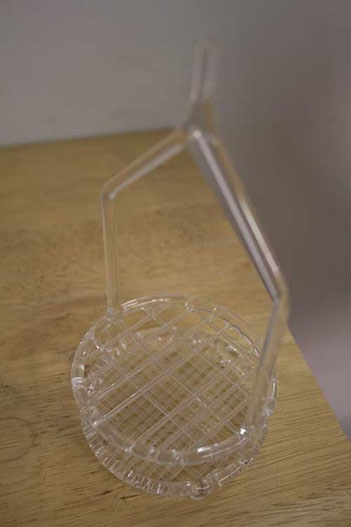 Roeger created this glass apparatus that allows researchers to load samples into a solution without having to touch them. 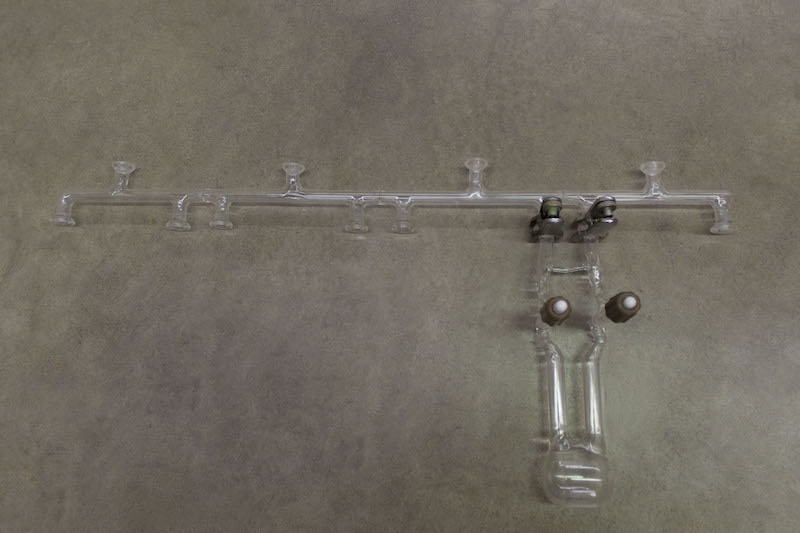 Roeger's custom work allows researchers to have glassware designed for their specific studies.

Roeger was introduced to the trade early. Her father worked with her grandfather for a glassblowing shop at the University of Wisconsin-Madison. He went on to lead the ASU glassblowing facility starting in 1975.

“My dad always had a little shop at home. He would do side work, and my sisters and I would go out to his shop and just watch him. When I was 7 or 8, he would let us blow into the glass and blow big bubbles. Then when I was 10 to 12 years old, he would have me helping him do basic cutting and getting jobs ready for him,” Roeger said.

In college, she realized she shared her family’s passion and talent for glassblowing. She switched her major from education to business and became a student worker alongside her dad in 1991.

“Glassblowing has always been in my life. I didn’t really know I wanted to be a glassblower until I got to college and actually experienced what my dad would do on a daily basis. I thought ‘This is really cool. Maybe this is something I want to do,’ and I did a four-year formal apprentice program,” Roeger said.

After graduation, she became a full-time worker in the facility, taking over in 2006 when her father retired. However, Roeger never lost her love for education. In addition to running ASU’s Scientific Glassblowing Facility, she also teaches a graduate chemistry course on the topic.

“This course gives students a basic idea of glassblowing techniques,” Roeger said. “We start simple with cutting and polishing, and by the end of the class, they are making a full-scale distillation apparatus.”

Located in the Bateman Physical Sciences Center on the Tempe campus, ASU’s Scientific Glassblowing Facility allows faculty and students from all schools and departments to request customized glassware for their research needs. This includes distillation glassware, custom reaction vessels and vacuum glassware, among other tools.

“I don’t make beakers or test tubes. I take an idea from a researcher here at ASU, then using raw material of Pyrex tubing or quartz tubing, I heat the glass in a flame, and I can manipulate it to a shape or system needed,” Roeger said.

“Researchers often need to collect samples with no air in them. I can make a glass vacuum system that hangs on a wall in their lab and is a tool to take out all the air in a sample. I can also add valves that allow researchers to put a specific gas like nitrogen into the sample,” she says.

No two pieces are the same — every order is custom-built. Roeger can even modify or repair pieces from catalogs, including test tubes. Modifications can include adding new valves, connecting new pieces and adding drain mechanisms. The facility is a cost-effective way for researchers to create customized glassware and repair pieces they already have.

“If you order from a catalog, and you try to customize those pieces from a manufacturer, it is going to cost ridiculous amount of money,” Roeger said. “A lot of times, repairing glass — repairing a bucket of glass— is way cheaper than buying all new parts, too.”

Roeger consults with researchers during daily office hours. Starting with nothing more than an idea, she can draw out a design with the customer and create the project. Service occurs on a first-come, first-served basis, with a typical turnaround time of a week-and-a-half to two weeks.

“If any researcher has an idea in their mind, I can make it for them,” Roeger said. “I have never had to say no to anybody.”