The startup, which specializes in nanoparticle coatings, took home more than $70,000 from the competition, outperforming all ASU teams to date 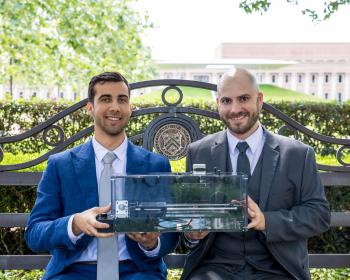 The brainchild of electrical engineering Assistant Professor Zachary Holman and graduate research associate Peter Firth, Swift Coat takes its name from proprietary deposition technology, which is capable of coating any surface with nanoparticles of varying compositions and sizes. The technology, which has applications in a range of industries, was developed through photovoltaic research in Holman’s lab.

Now in its seventeenth year, the Rice Business Plan Competition is considered the premier graduate-level entrepreneurial competition, drawing support from more than 180 corporate and private sponsors.

“Our first day at the RBPC, they told us that this wasn’t just a competition, but the most intense and condensed startup accelerator program in the country,” Firth said. “They weren’t kidding about that, and I can tell you that Swift Coat did not return to ASU the same company that traveled to Houston.”

The intensity of the competition is evident in its attrition rate. Only 42 applicants from more than 750 were selected to pitch their ideas at the competition. Swift Coat CEO Firth and doctoral student Jonathan Bryan represented the company at the competition, securing $5,000 as they were selected as one of six teams to advance to the finals. They went on to win a $50,000 Department of Energy Cleantech University Prize, $15,000 in patent attorney expenses and a $1,000 High School Judging Prize, totaling $71,000 in investments.

“We’re actually pretty proud of the high school judging prize,” says Firth. “Functional coatings don’t have the natural appeal that some of the medical or software startups have, so we felt pretty good that we were able to convince a bunch of young entrepreneurs that coatings are cool.”

Since its founding in 2016, Swift Coat has been a two-man operation, with Firth and Holman serving as the CEO and chief technology officer, respectively. But the rigorous format of Rice’s competition — a 15-minute presentation followed by a 20-minute Q&A from industry experts — made it clear it was time to expand their personnel.

“During our preparation, Zak and I very quickly realized that Swift Coat had grown beyond what two people can handle and that Jonathan was the person we needed to be successful,” Firth said.

With Bryan’s input, the team turned their presentation into a more aspirational pitch, painting an image of Swift Coat as a $100 million company with a vast array of products and applications.

“Just as people might start to think this company is too good to be true, Jonathan would step in and talk about the incredible results he has produced in the lab,” Firth said. “This dynamic really seemed to resonate at the competition.”

Swift Coat’s success in Houston comes on the heels of their laudable performance at ASU and Avnet’s inaugural ASU Innovation Open, which pitted nearly three dozen fledgling startups against one another for a grand prize of $100,000. Swift Coat advanced to the final four, winning the $5,000 Zero Mass Water Materials Award as well as the SRP Innovation Award worth an additional $10,000.

“I’m extremely proud of Peter and Jonathan’s excellent showing on behalf of Swift Coat and ASU,” Holman said. “I think their placement and recognition in this premier competition provides validation that Swift Coat has what it takes to be a successful company. We’ll use this momentum to attract new customers while ensuring that we deliver on our promises to our existing customers.”

In less than a year, Swift Coat has attracted more than $125,000 in funding, and they’ve already put those funds to good use. They’ve found their first customers — a large glass company and a leading solar cell manufacturing equipment supplier — and are hard at work completing a third-generation nanoparticle deposition tool.

“It’s been their guidance over the last year that helped a couple of guys from ASU beat out teams full of engineers and MBA’s from Harvard, Stanford and MIT!” Firth said.

In June, Swift Coat will head to the Department of Energy’s Cleantech UP National Competition. The event draws competitors from eight regional collegiate entrepreneurship competitions from across the nation to vie for a $100,000 grand prize. Swift Coat’s entry was secured with the Cleantech University Prize they won at the Rice competition.

“The day we got back from Houston, we were in the lab running experiments and generating data to showcase at the competition and take home another big prize for Swift Coat,” Firth said.

Twenty years after he helped establish the Department of Chicano/a Studies at ASU, Associate Professor Edward Escobar listened as friends and colleagues reflected on his accomplishments and bid him farewell.Several speakers at the ASU Art Museum became emotional Friday as they recounted the impact Escobar had on everyone from professors to administrators to students.“Ed has three defining charac... 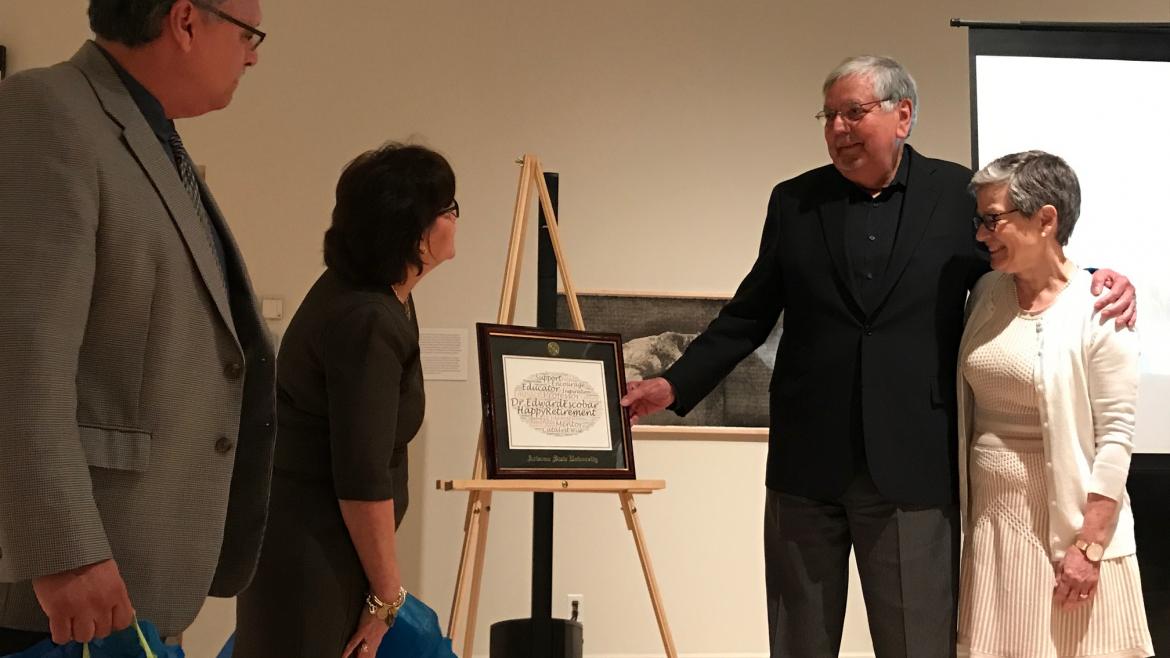 Several speakers at the ASU Art Museum became emotional Friday as they recounted the impact Escobar had on everyone from professors to administrators to students.

“Ed has three defining characteristics,” said Regents’ Professor Carlos Velez-Ibanez said — commitment, ferociousness and humanity. "You made it possible for us to move from what was then the Chicano/a Studies department to what we have now.”

Velez-Ibanez's comments connect what was then a fledgling department to the growing School of Transborder Studies, which includes student internship and study abroad opportunities, transborder-focused initiatives and programming, a speaker series, a teacher education program and a unique PhD program.

A native of Los Angeles and the son of Mexican immigrants, Escobar came to ASU in 1993 and immediately began advocating for the study and research of the Southwest’s considerable Chicano/a and Latino/a population. Four years later, in 1997, the Arizona Board of Regents approved the creation of the Department of Chicano/a Studies at ASU.

Over the years, Escobar watched as it grew into the Department of Chicano/a and Latino/a Studies in 2005, and then finally into the School of Transborder Studies in 2010.

“Thank you all for being here for this really moving celebration of what we’ve done over the last 24 years,” Escobar said. “It has been a privilege to be here and to work with all of you. This school is going to go on, and it’s a legacy I’m very proud of. … I know that the future is bright for our unit.”

Regents’ Professor Emeritus Cordelia Candelaria recalled how back in the early 1990s as discussions were underway to introduce Chicano/a studies to the university, she fought for Escobar to be considered as director. At the time, he was the first historian to have published an article on Chicano history in the Journal of American History.

Candelaria credited Escobar with helping to “break down the barriers and walls” Chicano/as faced in higher education at the time.

“This is the field of interdisciplinary studies, and ASU wanted to be there as the rocket shot off,” Candelaria said. “Ed had great plans and saw ASU for the great institution that it could be. That’s the kind of energy and belief and resolve that we needed.”

True to his colleagues’ words, Escobar’s passion for his work never faltered. Most recently, he was instrumental in the creation of the School of Transborder Studies’ first doctoral program — the only one of its kind in the country — which welcomed its first cohort in the fall of 2016.

Alejandro Lugo, current director of the school, worked alongside Escobar to establish the infrastructure of the doctoral program, developing the courses and outlining the requirements.

“I’m fortunate to have experienced his support, appreciation and kindness,” Lugo said. “He is a major intellectual and administrative presence, and I am going to miss him.”

Some time was taken during the reception to read comments from past students of Escobar’s. They ranged from humorous to heartfelt, with one student remarking, “He showed me what it was like to have people in my corner rooting for my success and what that success could look like.”

It has always been about the students first, Escobar said, calling them an inspiration and the thing that keeps him going.

“The students are the reason I got into this line of work to begin with,” he said.

Though Escobar is retiring, he made it clear that his work to better society through social change will not stop.

“I’m a chapter and a half away from finishing my next book,” he said. “And I know that this kind of work will continue because it’s who we are, and it’s who I am.”