“Arizona State’s improvement since 2006, in a period of just over a decade, is tremendous,” said Ross DeVol, chief research officer at the Milken Institute. “When you look at the universities ASU ranked ahead of, Harvard, Johns Hopkins, Duke, you can go down the list, these are premier research universities and ASU has moved ahead of them. ASU has a top notch research apparatus in place, especially with President Michael Crow’s emphasis on research that doesn’t just advance scientific knowledge but also is relevant to the marketplace.”

“The Milken Institute ranking recognizes ASU’s commitment to sharing the knowledge we create with the innovation marketplace to better serve our communities,” said Sethuraman Panchanathan, executive vice president of Knowledge Enterprise Development and chief research and innovation officer at ASU. “We’re not only advancing regional competitiveness through research and discovery, but also ensuring that our work has direct impact on lives every day.”

Arizona Technology Enterprises (AzTE) is the exclusive technology transfer organization for ASU. AzTE works with faculty, investors and industry partners to translate ASU innovation into broad societal impact. Since 2003, AzTE has launched more than 100 startups, which have generated more than $650 million in investment capital, and has received more than 2,700 invention disclosures.

Augie Cheng, AzTE’s CEO, was recruited by ASU in August 2007 to lead AzTE’s transformation into a faculty service and impact-driven organization.

“We have been quite fortunate to be able to work with world-class researchers at ASU focused on use-inspired research activities. Our team partners with industry and investors to execute rapid and efficient deals that aren’t bogged down by the typical institutional constraints,” Cheng said. “This emphasis on speed to market, universal marketing, and post-deal support for our technologies and startups has helped ASU inventors achieve real-world use of their intellectual products.”

More information can be found online at http://www.azte.com/.

When Gerald Farin worked with colleagues to establish the Partnership for Research in Spatial Modeling (PRISM) center at Arizona State University, he showed how design and the arts at ASU, as well as other disciplines, could benefit from geometric modeling. This Friday, more than two decades later, a new visualization and prototyping lab at the School of Art’s Grant Street Studios in downtown Ph...

When Gerald Farin worked with colleagues to establish the Partnership for Research in Spatial Modeling (PRISM) center at Arizona State University, he showed how design and the arts at ASU, as well as other disciplines, could benefit from geometric modeling. This Friday, more than two decades later, a new visualization and prototyping lab at the School of Art’s Grant Street Studios in downtown Phoenix will be dedicated in his memory.

“He was a trusted colleague and legendary teacher who guided a generation of students at ASU from 1987 until his death in 2016,” said Dan Collins, one of the founders of the PRISM lab and a professor of intermedia in the School of Art, part of the Herberger Institute of Design and the Arts. 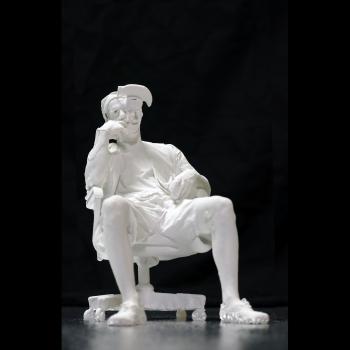 This Binded Gypsum 3-D print, titled "Michael just shaved his beard and has been second-guessing since," was created by graduate art student Andrew Noble using resources from the 3DVP lab. Photo courtesy of the Gerald Farin Lab for 3D Visualization and Prototyping Download Full Image

In addition to founding the PRISM lab with Collins and colleagues Anshuman Razdan and Mark Henderson, Farin was a computer science professor for 29 years in the Ira A. Fulton Schools of Engineering and considered a visionary.

“He was a brilliant computer scientist, educator and interdisciplinary thinker who was instrumental in establishing research in visualization and prototyping on the ASU campus and fostering an international dialogue around geometric modeling,” Collins said.

Just as the PRISM lab is a center for interdisciplinary research involving 3-D data, modeling, visualization and analysis, the new Gerald Farin Lab for 3D Visualization and Prototyping (3DVP) promises to be a space where researchers, students and collaborators will benefit from its resources.

Thanks to a generous one-time grant from ASU President Michael Crow, the lab will have five systems — four 3-D printers and one small CNC router, which will be on display during Friday evening’s dedication ceremony. The event will also include the unveiling of a new high-resolution, handheld 3-D scanner as well as DIY-type body scanners built with students. Artwork, forensic models from ASU West, medical teaching models from a collaboration with the Phoenix Children’s Hospital and more will be on hand at the dedication.

In addition, local engineer Steve Graber is in the process of building a large-scale “deltabot”-type machine for the lab that will be capable of creating a printed object more than 4 feet tall.

The School of Art, Fulton Schools of Engineering and the PRISM lab will dedicate the 3DVP at 7 p.m. Friday, April 21, at Grant Street Studios. The event coincides with Third Fridays, when the university community and the general public are invited to visit galleries, and the lab will be open from 6 until 9 p.m.