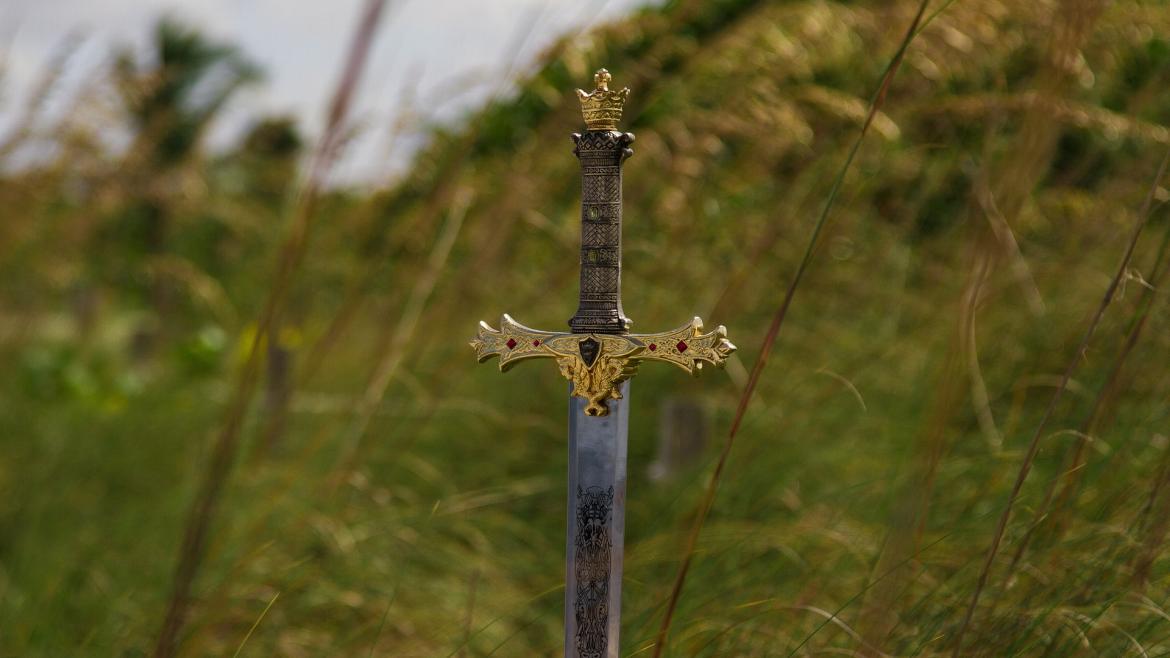 New book explores how confluence of a range of fields verify legends, sort misinformation and seek truth in death

Thanks to an unlikely fusion of disciplines, it’s an interesting time to be dead — especially for the famous.

Today, researchers at the intersections of medicine, forensics, history, anthropology, folklore and pop culture are using science to confirm details about a range of historical figures, and ASU Professor Christopher Stojanowski has captured a collection of the most interesting stories in a new book, "Studies in Forensic Biohistory: Anthropological Perspectives." 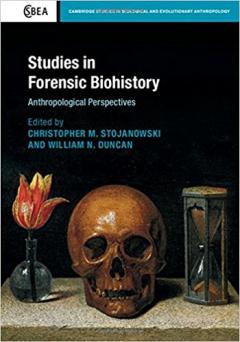 “Oftentimes, it’s about trying to positively identify a body as belonging to a famous person from history, but there are also infamous historical events for which bodies can provide answers,” said Stojanowski, professor and associate director of undergraduate studies at ASU’s School of Human Evolution and Social Change.

“The public loves it all.”

As it turns out, studying the remains of potentially noteworthy humans is a complicated business. Biohistory shares much in practice with mainstream anthropology, which is often focused on giving voice to the voiceless. But while anthropology is like working in a vacuum, trying to hear anything at all, biohistory is like listening for a clear radio station amid endless, buzzing feedback.

There are always standing opinions and narratives in place in these cases, even if they rarely tell the whole story, Stojanowski said.

“This means people’s life stories and even broad sections of history can be vetted, revised or retold entirely based on what is found. As you get into these cases, it really begins to raise questions about the nature of fame and of personal attachments to things bigger than ourselves.”

On fame and the human brain

Stojanowski’s first biohistory case started more than decade ago when he and Duncan were contacted by a Franciscan friar, hoping they duo could confirm the identity of a skull. The Catholic church thought the skull belonged to a friar beheaded in 1597, who was being considered for sainthood. 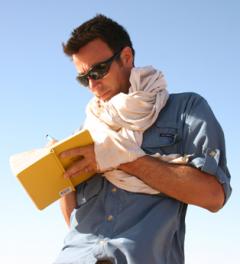 After many scientific twists and turns (including a quickly abandoned idea of recreating fractures using a pig cadaver and recovering DNA from blood in the stomach of a louse recovered from the skull’s ear canal), the claim could neither be proved nor dismissed.

What stuck with Stojanowski, however, were the lingering implications of the effort — for science and living people alike.

“The friar in question was the subject of canonization procedures, so I was able to use a skill set for a community that specifically valued what I was trying to do for them,” he said.

Stojanowski realized his work had actually become a part of the friar’s story. He realized he was on the cusp of a new field of study.

“No one type of training prepares you to do this work, how to understand why we care and what the physical presence of fame and celebrity — in the form of the body — means to us,” he said. “The published literature is horribly scattered.”

In an effort to bridge this gap, Stojanowski and Duncan put out a call to others with this unique subset of experiences to share their most notable biohistory cases for the book.

“For 'Studies in Forensic Biohistory: Anthropological Perspectives,' we chose authors that could add something unique, theoretical or humanistic to the volume, more so than just an assessment of techniques and methods,” he said. “We also wanted to explore the range of individuals who become historically important, as there is some meaning to these patterns.”

Five paths to a notable demise

So what types of patterns has Stojanowski found exactly? Well, if you’re looking to be remembered, and studied, post-mortem for ages to come, this new volume can certainly provide some tips.

Stojanowski describes Margaret Clitherow, a Catholic martyr who was executed in a particularly brutal manner, as a prime example (squeamish be warned — Google at your own risk).

“Famous leaders or scientific luminaries are often targeted for study, but ASU Associate Research Professor Richard Toon has a chapter in the book that does a great job exploring the behind-the-scenes motivations for why some biohistorical cases gain traction,” Stojanowski said. “Money is often there in the background somewhere.”

Option 3 — Be in the right place at the right time.

“In the U.S., the most visible biohistory cases involve Western outlaws and a series of catastrophes and massacres that occurred during Western expansion” Stojanowski said. “There is also a chapter on the Mountain Meadows Massacre, for example, as there is an entire specialty of sociology that studies death tourism — people visiting the sites of famous murders, mass disasters, etc.”

Option 4 — Leave something behind.

“In our book, there has to be a physical body or body part left behind or found that can be studied. That is our specialty,” Stojanowski said. “But there is a subset of work that seeks retrospective medical diagnoses, and here, journals and other written testimony can be used to try to diagnose (often with much controversy) a condition a famous person may have suffered.”

Option 5 — Have a reputation at home.

Stojanowski said he finds local folk heroes more interesting because their stories are less well known and documented, but they still helped shape the course of history. “If publishing an article on them brings awareness to conveniently overlooked aspects of U.S. or world history, then that to me is the greater service done by this type of work.”

Acknowledging the fringe, while moving into the mainstream

Even as the concept of biohistory develops and solidifies, it still bears some remnants of its relative youth, particularly in the hands of amateurs, the scientifically untrained or others who might be drawn to the sensational more than the substantive.

Stojanowski hopes this new volume can encourage more real conversation about the social theory, complexities and responsibilities involved in dabbling with posthumous identities and its possible repercussions in the minds of the living.

“What right do people have to dissect someone’s health history hundreds of years after they died? The short answer is that most researchers probably don’t think about this as much as they should and the ethical guidelines are murky.”

On the other hand, he said, the pendulum can swing both ways.

“The book also discusses,” Stojanowski said, “some of the reputational rehabilitation that may have been part of the Richard III story that emerged over the last few years.”

A Sun Devil biking across campus might seem like no big deal, but there’s more to it.For years, the university struggled with theft, a lack of bike lanes and inadequate bicycle parking. That was before Arizona State University’s Parking and Transit Services launched its bikeASU program, sparking a series of changes aimed at increasing bike use across the Valley campuses, particularly in Temp... 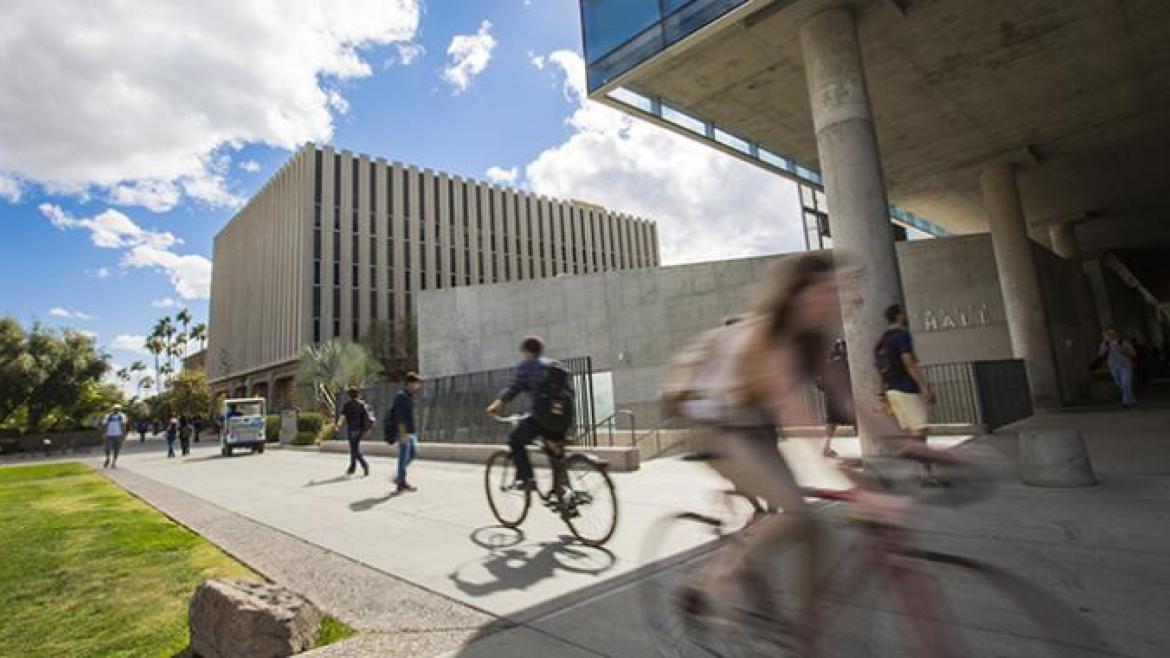 A Sun Devil biking across campus might seem like no big deal, but there’s more to it.

For years, the university struggled with theft, a lack of bike lanes and inadequate bicycle parking. That was before Arizona State University’s Parking and Transit Services launched its bikeASU program, sparking a series of changes aimed at increasing bike use across the Valley campuses, particularly in Tempe.

It has been such a success that it was honored with a President’s Award on Wednesday.

“We give some of our most complex problems to Parking and Tranist,” ASU President Michael Crow said. “With innovations, there are few home runs; most things change a little at a time. These guys took a comprehensive look at everything.” 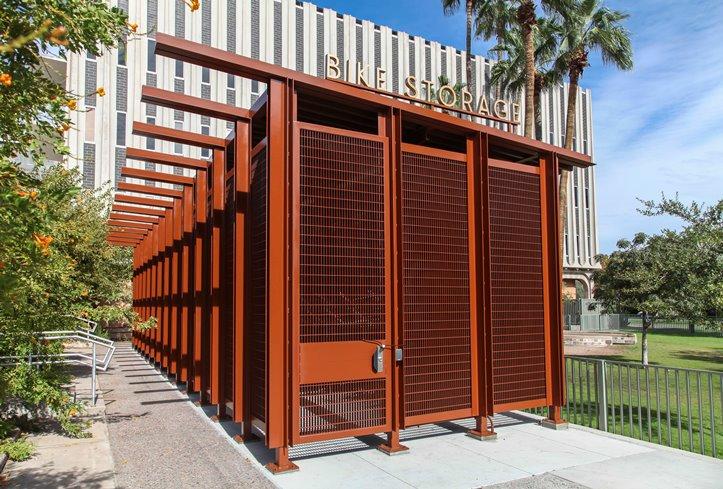 BikeASU includes valet stations, card-access storage facilities and a more accurate registration process. The number of registered bikes has almost doubled since the program launched in 2014.

There are also bike priority areas and shared-use lanes to facilitate safe and convenient commuting, resulting in ASU being the first ever gold-levelThe designation was given to ASU by the League of American Bicyclists. Bicycle Friendly University in Arizona.

For some program organizers, it’s personal.

“The reason I do all of these things for the program is that I’m a bicyclist, too,” said JC Porter, assistant director for commuter services for ASU Parking and Transit Services and part of a seven-member bikeASU team. “I’m happy to see the university has implemented these services, and the students taking advantage of these opportunities.”

The President’s Awards were established by former ASU President Lattie Coor in 1996, and Crow has attended each ceremony since 2003. The awards honor ASU faculty and staff for developing creative and inspiring programs that promote innovation, sustainability and social embeddedness to advance the university, Arizona communities and schools.

“We have this idea that innovations should happen from the core,” Crow said, citing his vision for growth within the university, which has been named the nation's most innovative university by U.S. News & World Report two years in a row.

In addition to bikeASU, which was honored with a President's Award for Sustainability, other winners include:

CarePRO is an evidence-based, psycho-educational skills-building intervention for family caregivers of people with dementia. It fosters caregiver empowerment and reduces caregiver stress and distress and enhances positive coping and emotional well-being. Offered in English and Spanish, CarePRO has been successfully embedded into local Alzheimer’s Association chapters across Arizona and Nevada since 2009.

ASU’s Global Freshman Academy gives learners anywhere in the world the opportunity to earn entry-level university credit after successfully completing digital immersion courses hosted on the edX platform, which are designed and taught by leading scholars at ASU. By allowing students to learn, explore and complete courses before applying or paying for credit, GFA reimagines the freshman year and reduces academic and monetary barriers while opening a new path to a college degree for many students.

This is a collaboration between Environmental Health and Safety, Purchasing, University Technology Office and University Business Services to develop software that automatically enters chemicals into researchers’ inventory based on purchase information. It tracks where all chemicals are stored and used to ensure safety and regulatory compliance.

The 2016 New Student Orientation lunches on the Tempe campus collaborated across university partners to incorporate zero waste operations and engagement practices into the lunches. More than 17,000 meals were served to more than 13,000 guests resulting in a total of 11,664 pounds of waste, all of which was diverted away from the landfill either being recycled or composted. 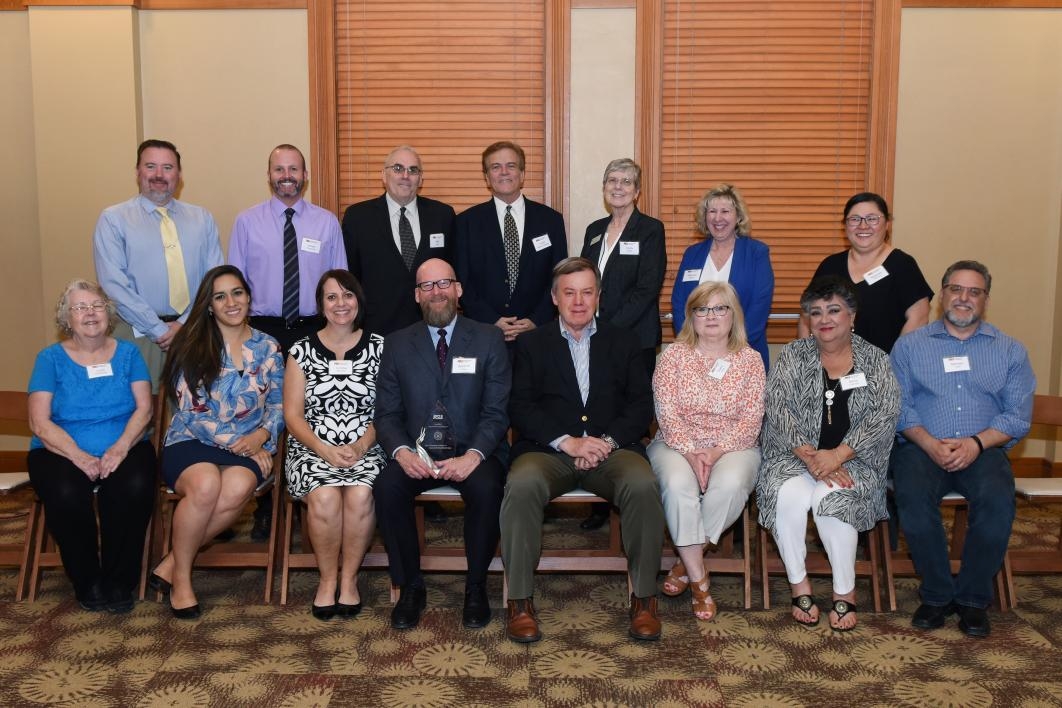 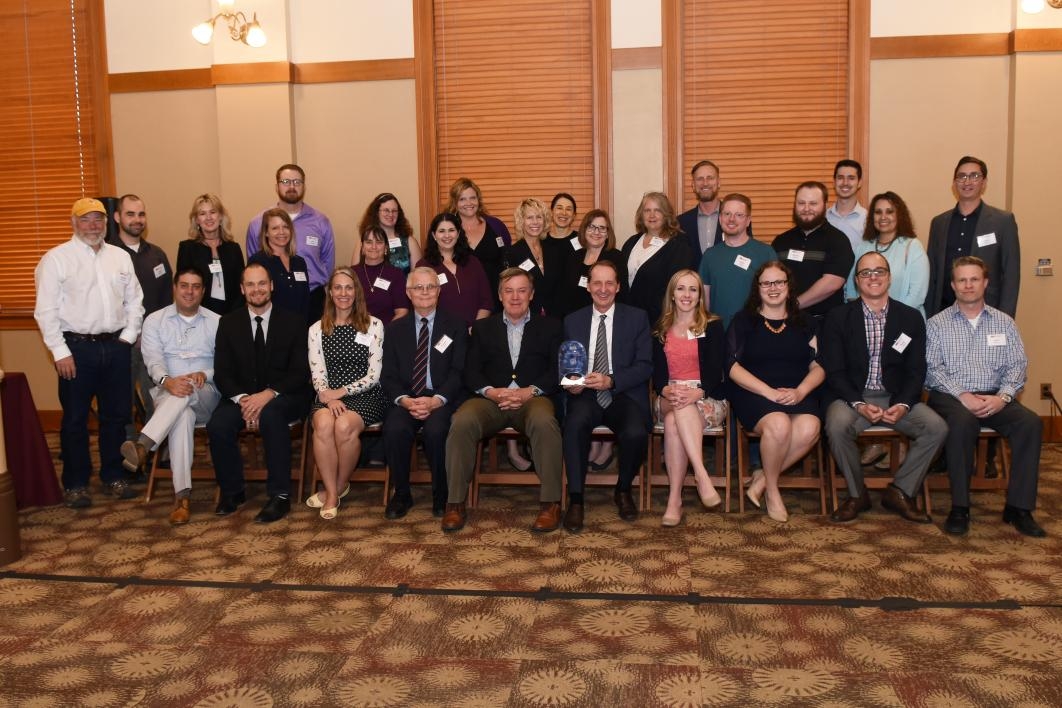 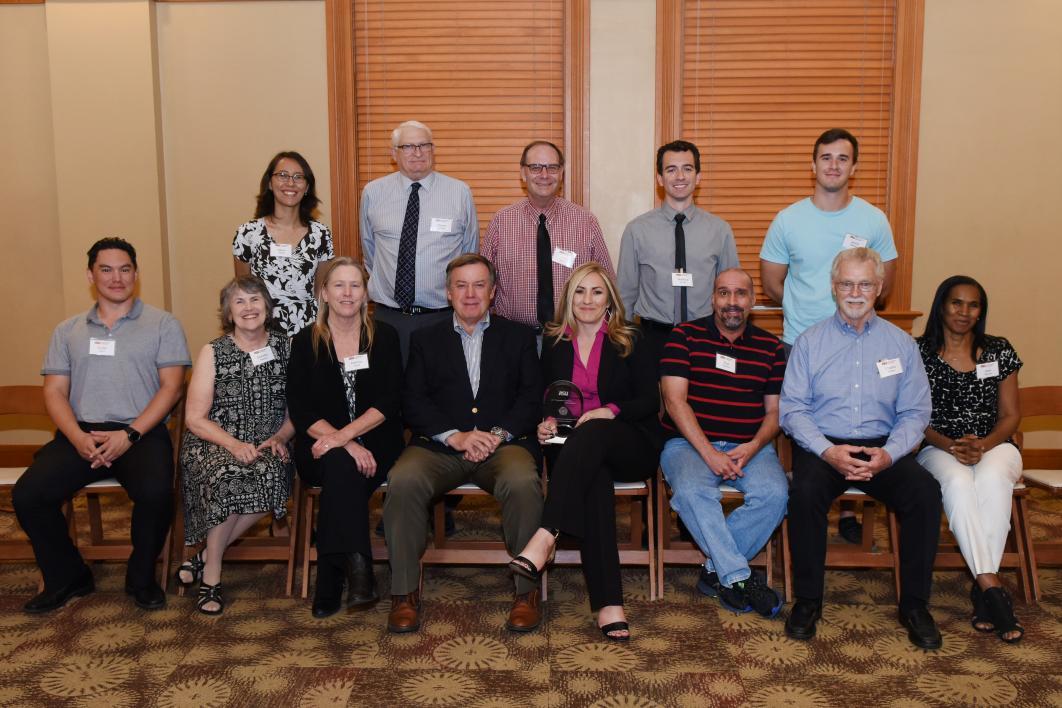 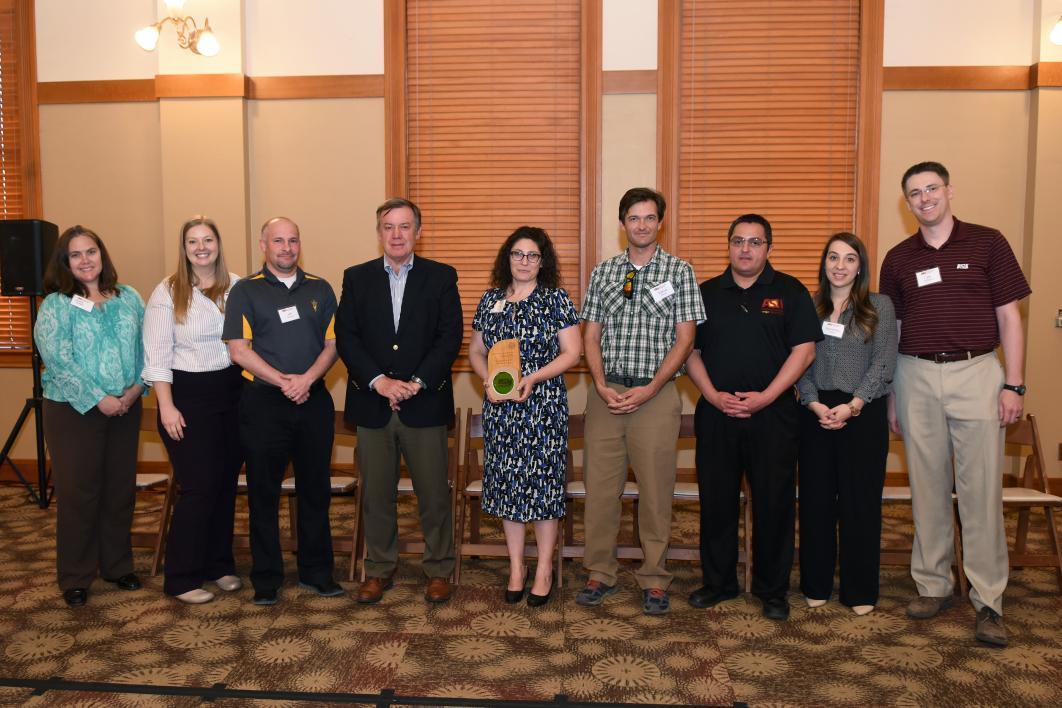 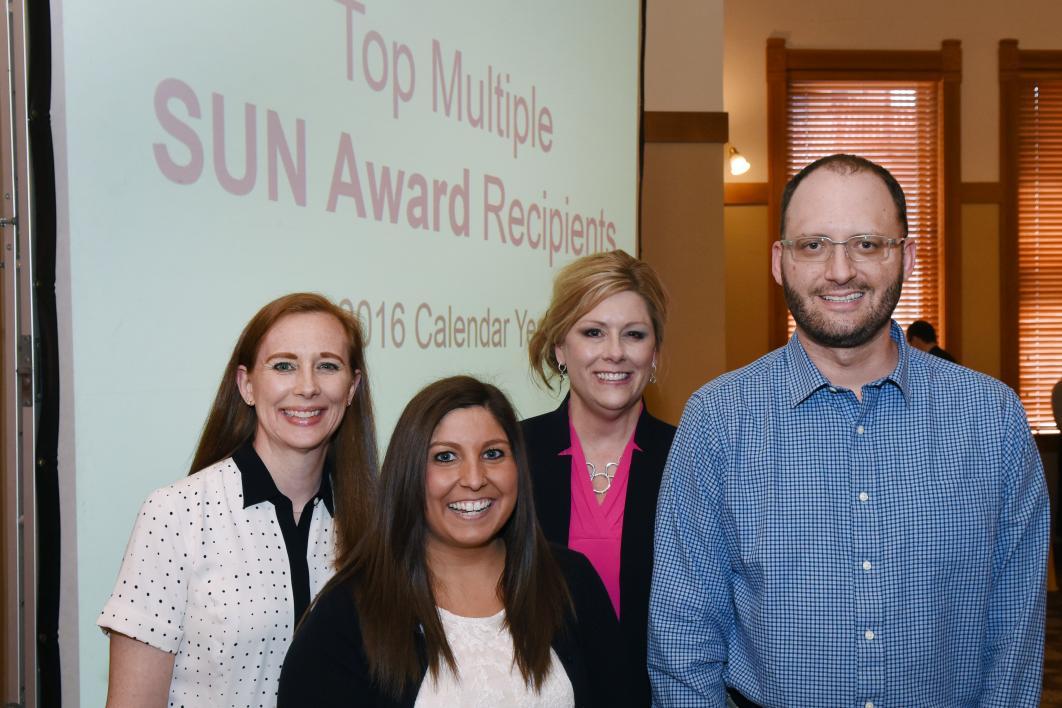