Losing our religion? Not just yet

Many churches are filled to capacity on religious holidays such as Christmas and Easter, but the pews are often empty the rest of the year.

Recent studies have said as much, prompting questions about why fewer people are attending church regularly and whether the United States is becoming less religious in general. Charles H. Barfoot, who teaches religious studies in Arizona State Univeristy's College of Liberal Arts and Sciences, says that although there may be a growing shift from mainline churches to spiritual and non-denominational congregations, people are still finding religion in many ways. 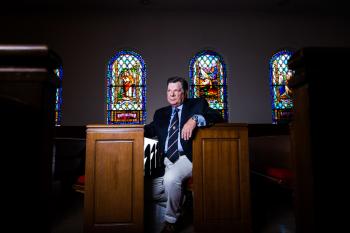 Barfoot, an instructor at ASU's School of Historical, Philosophical and Religious Studies, shares his thoughts on the subject.

Question: There are plenty of theories as to why fewer Americans are attending church weekly. What do you think is the primary reason why so many have drifted away from the church?

Answer: A couple of possible answers. There has been a lot of hurt inflicted on people by the institutional church, such as a lack of acceptance of LGBTQ, molestation of children, racism, fundamentalism.

And I think the secularization theory is still valid in many quarters. Churches that are attractive to progressives are losing the most members. Why? With secular alternatives, why bother? Churches with a more mystical appeal, such as the Episcopal church or the Roman Catholic church, seemingly are in better shape than simply, purely rational ones. The church has to stand out among a plethora of alternatives. If it can't or won't — they quickly lose their influence.

A famous sociological theory from the 1960s claimed that churches needed to provide both "comfort and challenge." That requires a delicate balance, a kind of theological ballet. A constant challenge with little or no comfort goes stale very fast. Churches that began hemorrhaging members in the 1960s still seem oblivious to the fact that comfort, too, is needed.  The black church, in my opinion, has had for years the right kind of balance between the two. Dr. Martin Luther King Jr.’s authority came from the church — the prophetic tradition — the challenging part. But the nurturing part has not been forgotten. Many "secular" performers got their start in church — from a beloved community that was very supportive and nurturing.

Q: In the paradoxical reality of our world, we're also seeing the rise of massive congregations in so-called mega churches. What is the appeal of the mega church?

A:  First, anonymity. It is more like a theater. You just show up and go in. Much less threatening — nobody knows who you are and you can stay that way if you so choose to do so.

Second, more money means more ministry. Quality of everything can improve from music to architecture, from real estate to leadership. Mom-and-pop stores have been replaced by big-box stores, whether we like it or not. It takes a certain number of people and dollars to buy land, put up buildings, make payroll, etc. Many churches today cannot afford to build and if they do have buildings can no longer afford their upkeep. And I think the days of "passing the plate" are long gone. There has to be built-in profit centers such as weddings, schools, day care, senior care — even among non-profits. They not only need to be self-sustaining, they also need to contribute to the general budget.

Q: A lot of studies suggest millennials in particular are being marked absent for traditional Sunday services. How would you grade the level of interest in religion among the millennial students that you teach?

A:  Huge interest for a variety of reasons. I think some students come with a kind of awe — that this is religion after all. They are looking for the real in religion — not the made-up or fabricated kind. They know intuitively that religion can be cruel and bad and also good and redemptive.  They come looking for the good, the real deal and that requires an intellectual pursuit as well as emotion.

Both in my New Testament and Hebrew Bible classes, students will often say, “I never learned that in Sunday school.” No, they didn't, and that is OK, too. The purpose of a church school is simply to learn the stories in the first place. And religious stories are most always great stories — the stuff of great myths — more fabulous than factual, but always pointing to a Truth with a capital T.  A later stage comes with education that provides meaning for the stories they have heard and know.

Q: Why do you think people are still drawn to religious studies, and what have you observed about the program's impact on students?

A: Harvey Cox, my former Harvard mentor, argues in his book "The Future of Faith" that we have now entered the new age of the spirit. Harvey, as always, is onto something. He has the uncanny ability to see around corners. As the old anthropologists of religion would put it, it is now “more about dance than dogma,” more spiritual than religious.

Former Secretary of State John Kerry once said that if he were an undergraduate today, he would most likely be a religious studies major. Religion has not gone away, and I think it is here to stay.

‎Q: How do you keep religious studies engaging and relevant with all the resources and partnerships at ASU?

A:  Religious studies by its very nature is highly interdisciplinary, and partnerships are automatic: sociology of religion, history of religion, philosophy of religion. Now religious studies partners with history and philosophy in a more formal way through a school. I also tell my students that my own double major in college was a wise decision. I have been going down both a social science and religion track ever since. Both disciplines help to inform the other. And I know of no better major than religious studies for a career in law, broadcast journalism or social services.

Answers have been edited for clarity and length.

Ed Finn’s new book “What Algorithms Want: Imagination in the Age of Computing” was published by The MIT Press. In his book, Finn, founding director of the Center for Science and the Imagination at ASU, where he is an assistant professor with a joint appointment in the School of Arts, Media and Engineering and the Department of English, considers “how the algorithm—in practical terms...

Ed Finn’s new book “What Algorithms Want: Imagination in the Age of Computing” was published by The MIT Press.

In his book, Finn, founding director of the Center for Science and the Imagination at ASU, where he is an assistant professor with a joint appointment in the School of Arts, Media and Engineering and the Department of English, considers “how the algorithm—in practical terms, ‘a method for solving a problem’—has its roots not only in mathematical logic but also in cybernetics, philosophy and magical thinking.” 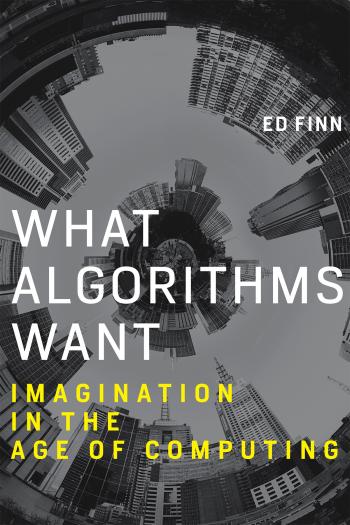 For more information on the book, visit the MIT Press website.

School of Arts, Media and Engineering Herberger Institute for Design and the Arts Faculty