Improving the energy grid in Pakistan is, without exception, the priority for a cohort of Pakistani graduate scholars studying engineering at Arizona State University this semester.

Participants in the U.S.–Pakistan Centers for Advanced Studies In Energy program, the students recently demonstrated renewable energy concepts during ASU’s Night of the Open Door — an event during which Phoenix-area residents visit campus, meet faculty and students, and explore research projects. 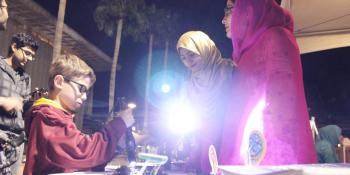 Above: Hira Rehman (in pink) and Asma Shamim (in gold) demonstrate the power of photovoltaics with members of the Tempe community during Night of the Open Door. Participants in the U.S.–Pakistan Centers for Advanced Studies In Energy program, the students recently demonstrated renewable energy concepts during ASU’s Night of the Open Door – an event during which Phoenix-area residents visit campus, meet faculty and students, and explore research projects. Photo by: Erika Gronek/ASU Download Full Image

Toy solar car races at the USPCAS-E exhibit attracted many young guests, giving the engineering students an opportunity to explain the importance of developing renewable sources of power. They also handed out LED light-up fans that, when they spin, spell out, “Renewable Energy: I’m a big fan.”

USPCAS-E is a partnership between ASU and two leading Pakistani universities: the National University of Science and Technology Islamabad and the University of Engineering and Technology in Peshawar. Funded through the U.S. Agency for International Development, the program is designed to find innovative solutions to Pakistan’s energy challenges. The group of students, comprised of 18 men and 11 women, represents the third cohort to spend a semester at ASU before returning to Pakistan to complete their master's degrees. Ussama Khalid Barki (left) and Usman Salahuddin (right) explain how photovoltaics could change the energy situation in their home country at Night of the Open Door on the Polytechnic campus. Photo by Erika Gronek/ASU

A NUST grad with a bachelor’s degree in telecommunications engineering, Anam Zahara from Southern Punjab is now working on a master’s degree in energy policy, with a focus on electrical engineering, through the program.

“We have many rolling blackouts in my area of the country,” she explained. Her vision is to integrate her telecommunications and electrical engineering education so she can “be a part of the process that improves Pakistan’s energy infrastructure.”

Education is a priority in Zahara’s family – both parents are teachers, two sisters are medical doctors and another has a master’s degree in agriculture.

“One thing I’ve learned here is that time is money,” she said. “It’s important to be punctual for class.”

For Usman Salahuddin from Karachi, the decision to pursue an advanced degree in energy systems was born of frustration. With a bachelor’s degree in chemical engineering from NUST, Salahuddin found himself literally powerless on the job almost daily in the fertilizer industry.

“There was not enough gas to feed the furnace, so we’d have to shut down the factory,” he explained. “It taught me that we cannot rely on fossil fuels. We must develop renewable technologies that can be safely implemented for industry.”

His attraction to the USPCAS-E program was heightened by the opportunity to focus on entrepreneurship. “This program not only makes us researchers, it also emphasizes becoming entrepreneurs,” Salahuddin said. “I believe small start-up companies will contribute significantly to solving my country’s energy problems.”

“Physics is about making theories,” said Ussama Khalid Barki, who holds a physics degree from NUST. “Engineering is about execution.” Noting that his country is struggling, Barki said it’s time for action, not theories.

Barki is now pursuing a master’s degree in energy systems engineering with an interest in developing technologies for rechargeable, solar powered batteries, but said he is inspired by energy researchers at ASU. He says he would like to continue conferring with ASU faculty once he returns home and work toward his doctorate.

“I have a new perspective,” he said. “Scientists explore space, but engineers build the telescopes.”

Farah Akram, who has a power electronics degree from NUST, did not let her poor sense of direction thwart her aspirations to pursue a master’s degree in electrical power engineering. “The ASU campus is so big that I got completely lost on my first day,” she said, explaining that her campus at NUST was small in comparison. “But everyone was so helpful, and eventually I found my way.”

The majority of Akram’s family is in business and she, who describes herself as “extremely organized,” is the only engineer. “Our family is passionate about education,” she said. “Engineering made the most sense for me.” 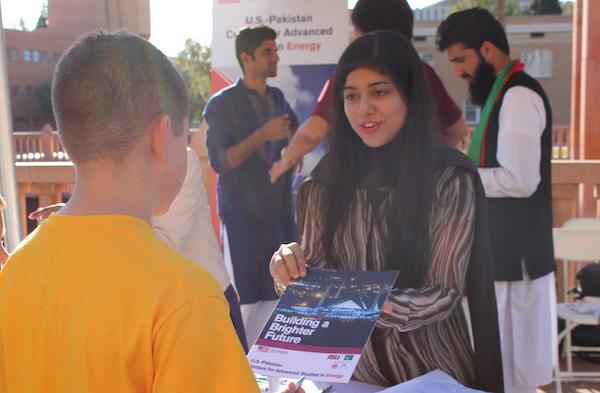 Farah Akram explains to members of the public what USAID’s mission is in Pakistan at Tempe Night of the Open Door. Photo by Erika Gronek/ASU

Unanimously, the students declared the Arizona Renaissance Festival their favorite cultural experience to date. They donned crowns along with other festival-goers and enjoyed the jousting knights, circus performers, musicians and the marketplace.

Actually, marketplaces of all sorts are of interest to the students. “We love shopping,” said Zahara, who says she’s particularly enjoyed Arizona Mills and Tempe Marketplace — both accessible via public transportation.

But more important than shopping and festivals are the opportunities to collaborate with other students.

“I feel so welcome — faculty has been extremely supportive,” Akram said. “This has been an unimaginable, new experience.”

“The cultural exchange has helped me learn how to socialize with people who are different,” says Barki. “One day on a trip via the light rail, a group of elderly ladies got on — so we stood up and gave them our seats. Everyone clapped. It was definitely a notable moment.”

Salahuddin noteed that the learning exchange extends well beyond American customs and culture. “We are not just meeting American students — there are students from five different countries working on one of my lab projects,” he said. “Exposure to these new, wide-ranging perspectives will be incorporated into the problem-solving processes we use when we return home.”

Today, Arizona State University and McGraw-Hill Education announced the winners of the 2017 Harold W. McGraw Jr. Prize in Education, one of the most prestigious awards in the field.The prize, founded in 1988 to honor the retiring former McGraw CEO, recognizes outstanding individuals who have dedicated themselves to improving education through new approaches. It is administered through an alliance ...

Today, Arizona State University and McGraw-Hill Education announced the winners of the 2017 Harold W. McGraw Jr. Prize in Education, one of the most prestigious awards in the field.

The prize, founded in 1988 to honor the retiring former McGraw CEO, recognizes outstanding individuals who have dedicated themselves to improving education through new approaches. It is administered through an alliance between McGraw-Hill Education and ASU, an alliance that began in 2015. 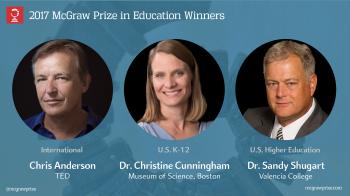 The winners were recognized in three categories — U.S. K-12 Education, U.S. Higher Education and International Education — and will each receive an award of $50,000 and a McGraw Prize bronze sculpture.

The 2017 McGraw Prize winners are:

A prize reception will be held at the 2017 ASU GSV Summit in Salt Lake City on May 9, and the winners will be recognized during a keynote at the event on May 10.

“These three educational leaders are inspiring examples of how passion, hard work and an innovative spirit can combine to create tremendous results,” said Harold (Terry) McGraw III, former chairman and CEO of the McGraw-Hill Companies. “We’re proud to honor them as we have so many other illustrious McGraw Prize in Education winners over the years.”

“Through their leadership and creative vision, Christine, Sandy and Chris have opened doors of opportunity for millions of learners and helped change lives,” said David Levin, president and CEO of McGraw-Hill Education. “By honoring them with the McGraw Prize in Education, I hope their stories reach many more people and inspire others to make a difference.”

“These winners are exemplars in education, advancing ideas and initiatives that are positively impacting students and teachers around the world,” said ASU President Michael M. Crow. “ASU is honored to partner with McGraw-Hill Education to continue to shine a light on innovators who are changing the education landscape as we know it.”

Cunningham, founder and director of Engineering is Elementary (EiE) at the Museum of Science in Boston, pioneered an engaging elementary engineering curriculum that bridges the research world and the realities that teachers face day to day. Her highly innovative project is transforming education by introducing engineering concepts and practices to elementary children. She believes schools should “Innovate for the future — but design for the classrooms of today.” Since 2004, her curriculum has been implemented in all 50 states and the District of Columbia, with access to populations underserved and underrepresented in STEM fields. Cunningham's curriculum has reached 12.8 million children and an estimated 1.25 million educators.

Cunningham has received awards for her work from the American Society for Engineering Education and the International Society for Design and Development in Education, among others. In 2015, the American Association of School Librarians awarded EiE the "Best Website for Teaching & Learning Award." She has given keynote addresses at a number of national conferences and testified before Congress on "Harnessing the Power of Engineering to Improve K-12 STEM Education.” Cunningham has elevated elementary engineering instruction through inquiry-based learning as a subject of national importance.

Shugart is president of Valencia College, a public college in Orlando with 65,000 students on five campuses. He has transformed his institution by focusing on best practices of student success. Valencia enrolls and advances large numbers of Hispanic students and is cited as a stellar model in community college change, with proven results. From 2006 to 2014, Valencia has witnessed an 83 percent increase in the number of students who earn an A.A. degree each year.

In fact, Valencia ranks fourth in the country among colleges and universities in the number of associate degrees awarded. Its associate degree graduates now gain automatic entry into the University of Central Florida, and one quarter of UCF’s graduates are now transfers from Valencia. Valencia has received the Aspen Prize for Community College Excellence and ¡Excelencia in Education! for its promotion of academic success for Latino students.

Anderson is "curator" of TED, the nonprofit organization devoted to Ideas Worth Spreading. Anderson helped turn what was once a closed-door conference devoted to Technology, Entertainment and Design into a global platform for spreading ideas across a wide variety of disciplines. Founded in 1984, the first TED conferences were held in Monterey, California. In 2006, Chris and his team experimented with putting TED Talk videos online for free — a decision that opened the doors to a radically new model for sharing ideas: Today there are more than 2,100 TED Talks available for free on TED.com, which are viewed about a billion times a year. Thanks to the support of thousands of volunteer translators, there are more than 86,000 published translations of TED Talks in more than 110 languages.

TED’s youth and education initiative TED-Ed aims to spark and celebrate the ideas of teachers and students around the world. TED-Ed includes a growing library of original animated videos, an international platform for teachers to create their own interactive lessons, a curriculum for presentation literacy skills and a global network of more than 250,000 teachers.