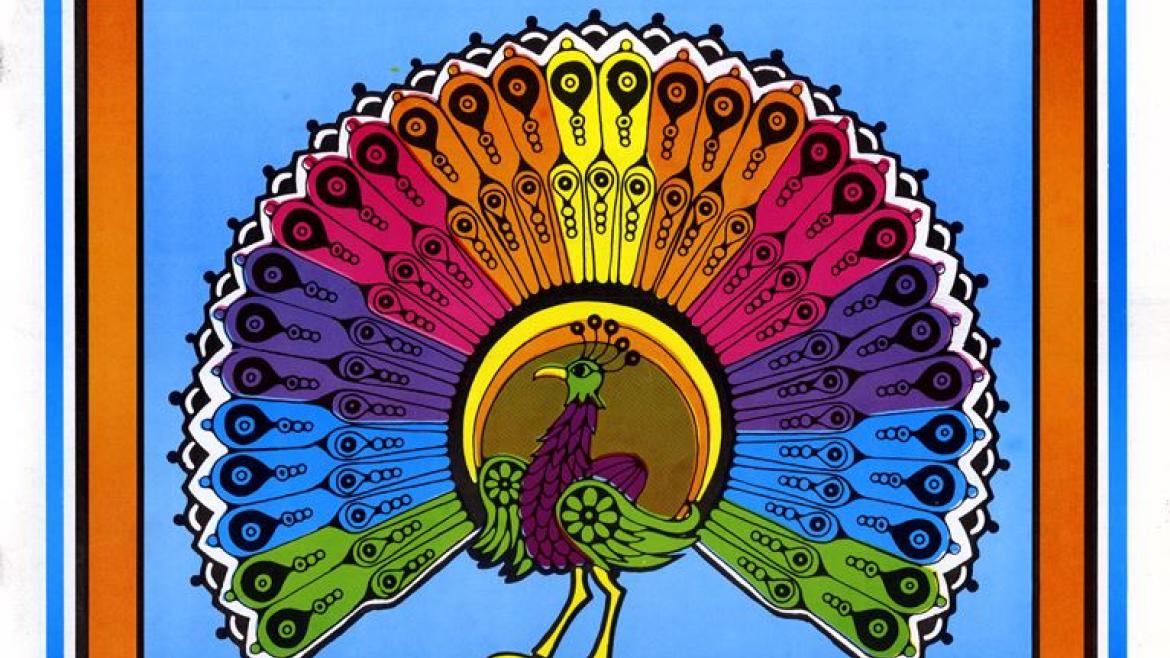 Bj Bud Memorial Archives help paint fuller picture of community; items to be on display at this weekend's Pride Festival

On the cover of a newsletter dated Sept. 15, 1977, is a drag queen in full makeup, hair and dress, all gaping smile and wide eyes, white-gloved hand raised high above her head as if to throw all her cares away. The title of the periodical is “The Pride of Phoenix.”

“When you think LGBTLGBT is shorthand for lesbian, gay, bisexual, trans, queer, intersex and asexual. culture, you think this,” ASU Library archivist Nancy Godoy said, pointing to the cover photo of Cissy Goldberg, a well-known drag performer in the 1970s Phoenix gay community. But “there are also families.”

Herself a mother and a member of the LGBT community, Godoy has been working since 2015 to sort and organize the 151 boxes of artifacts that make up the Bj Bud Memorial Archives, which document the community’s history in Arizona from 1966 to 2015. She’ll be spreading awareness about the archives at this weekend’s Phoenix Pride Festival, taking place from noon to 9 p.m. April 1-2 at Steele Indian School Park in Phoenix.

Godoy gestured then toward a photo at the front of the table. It depicted a young boy of about 8 marching amid a crowd of sign holders. The photo is from Phoenix’s first gay pride march in 1981. The boy’s sign reads, “My mom is a lesbian — and I love her.”

“These photos show the human side of the community,” she said, “which has been dehumanized so much. It shows they’re not monsters.”

Before Godoy began her work, the boxes full of artifacts sat untouched in storage at Hayden Library in Tempe since being donated in 2004 by the Valley of the Sun Gay and Lesbian Center. The center had been around since the early ’90s, providing Phoenix’s LGBT community with health services, support groups and educational programs. Over the years, it amassed the collection of artifacts that came to be a resource for anyone who wanted to learn more about the LGBT community and experience.

The collection was given the name “Bj Bud Memorial Archives” in 1996 after the passing of Harlene “Bj” Bud, in honor of her work as an activist in the 1970s, leading grass-roots efforts that included planning the first Phoenix Pride March and Rally and bringing awareness to the AIDS crisis in Arizona. When a lack of funds and manpower forced the center to close in the early 2000s, it turned the collection over to ASU Library in the hopes that it would continue to serve as an educational tool.

A recent recipient of the Arizona Humanities Rising Star Award for her archival work, Godoy sees the value in preserving the past. When she discovered the archives at Hayden, she felt compelled to bring them back to life.

Around the time Godoy began recruiting volunteers to help with the archive, she met Marshall Shore, who bills himself as Phoenix’s “hip historian.” (Unprovoked, Godoy willingly backed up that claim: “Have you met him in person? His outfits are always great. I’m jealous.”) Shore was working with Phoenix Pride, which was moved to action after witnessing the demolition of beloved downtown drag bar 307 Lounge. Since the 1940s, it had provided a safe space, and now it was gone.

“When 307 was demolished, it brought a group of folks together who were noticing we had lost this important structure that was part of our history that held a good story,” Shore said. “So we decided to put together a project to start documenting that history.”

“A lot of people, when they think gay history, they think New York, or San Francisco,” Shore said. “But there’s a big history of the gay community in the Southwest. And this project will help document those stories of perseverance.” 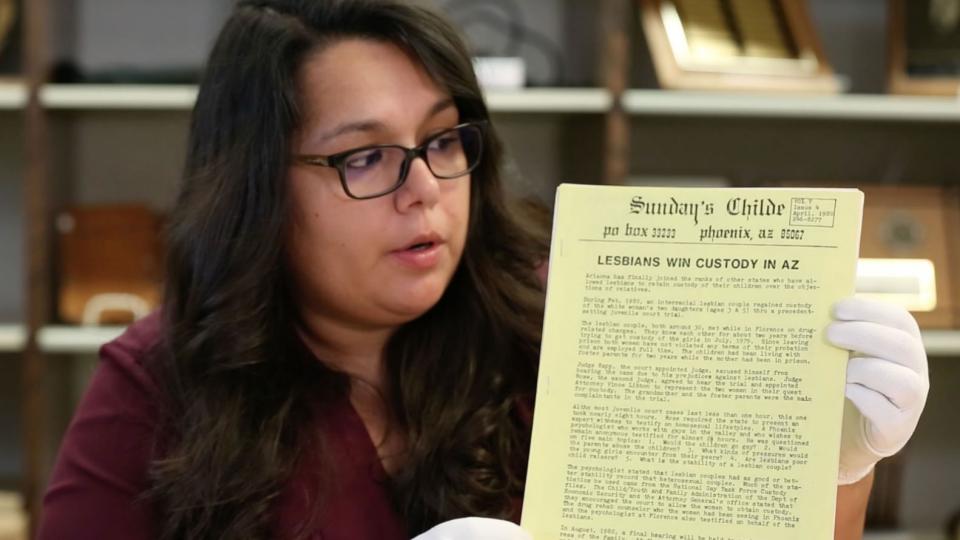 When ASU Library archivist Nancy Godoy discovered the LGBT archives at Hayden, she felt compelled to bring them back to life. She sees the value in preserving the past. “In order to get a real deep understanding of Arizona history, you need multiple perspectives,” she said.

Godoy also recruited the help of ASU students and faculty, including Pamela Stewart, senior lecturer of history in the College of Integrative Sciences and Arts, who helped index scads of old photos. What struck Stewart was “how much great civil rights work was going on in a community many wouldn’t know existed in Phoenix and Arizona in earlier decades.”

It took Godoy and her team a year to create a detailed overview of all of the items in the collection, which is now available online. The physical items themselves are housed at ASU Tempe campus’ Hayden Library, where they are accessible to the ASU community and the public, but Godoy hopes to add photos of the artifacts as well as digital recordings of oral histories to the online archive site. (She and her team have already begun recording oral histories in Hayden Library’s mkrstudio.)

For now, the online component serves as a guide for those in the community interested in seeing what’s available to research, as well as what is not in the collection that they could donate. Currently, Godoy said, it skews more toward documentation of the experiences of white, gay males. Stewart said that could be for a number of reasons, including who could financially and socially afford to be out during the 1970s and ’80s, as well as who was doing the documenting.

“Some individuals and groups risk a great deal when they document their lives and interests and have worked to ensure invisibility,” she said. “But that is not the same as not existing or having no history. … We can’t continue to let people believe that a history of what we now term LGBT lives in Arizona doesn’t exist. That very attitude means that policy mistakes are made and bias and hate can roam freely.”

Godoy and Shore will be hosting a table at this weekend’s Phoenix Pride Festival to promote the Arizona LGBT+ History Project. They’ll have a timeline, artifacts from the archive and images on display, as well as educational pamphlets. The pair also hope to have traveling exhibits of the Bj Bud Memorial Archive, and in the coming months, Godoy will be organizing workshops at local libraries to spread awareness about the project and the archives that will teach attendees how to preserve their own pieces of history and encourage them to donate to the collection. For more info on that, go here.

It’s about making the resources available to the wider community, she said. Aside from educating the community at large, there are talks of the archives finding their way into the curriculum of ASU faculty members in women and gender studies.

Godoy has also been instrumental in establishing ASU’s first LGBT Faculty Staff Association, for which she serves as the secretary. The group’s constitution was finalized in March, and they are now working with the Rainbow Coalition — an umbrella organization for the lesbian, gay, bisexual, trans, queer, intersex and asexual organizations at ASU — on a number of initiatives for Phoenix Pride.

It goes back to ASU’s charter, Godoy said. “It’s about striving to better ourselves and the communities around us.”

Gerhard Wagner, Elkan Rogers Blout Professor of Biological Chemistry and Molecular Pharmacology at the Harvard Medical School, is the Spring 2017 Eyring Lecturer at Arizona State University. The Eyring Lecture is a distinguished lecture series dedicated to stimulating discussion by renowned scientists who are at the cutting edge of their respective fields. Eyring lecturers give two presentations:...

The Eyring Lecture is a distinguished lecture series dedicated to stimulating discussion by renowned scientists who are at the cutting edge of their respective fields. Eyring lecturers give two presentations: The first is a more general lecture targeted towards a general audience interested in learning about contemporary scientific problems directly from the scientists contributing to the field, the second is a more technical presentation for practicing scientists and current students. 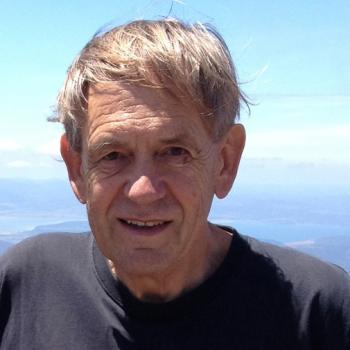 The general lecture, "Solution NMR from a Chemist’s Tool to Solving Protein Structures," will take place at 6:30 p.m. April 13, in the Physical Sciences H-wing lecture hall H-150 on the Tempe campus.

Wagner is one of the most influential researchers in the field of NMR studies of protein structures and function. He earned a doctorate in biophysics at the ETH Zurich working with Kurt Wüthrich (1977), where he worked out some of the basic NOE techniques and algorithms for structure determination using NMR data, and published one of the first protein structures to be determined using this new tool. After earning Privatdozent at ETH he moved to the University of Michigan in 1987 as associate professor of biological chemistry, where he continued to develop new NMR techniques for analysis of protein dynamics. In 1990, he moved to Harvard Medical School as professor of biological chemistry and molecular pharmacology.

Wagners' research at Harvard is focused on structural aspects of protein function, and how proteins interact with other macromolecules or small-molecule ligands, and how these interactions relate to biological function using NMR spectroscopy, computational methods and chemical biology approaches.