Sparky Slam gives students, teachers an outlet to share their work in a safe environment

On a warm Saturday night on ASU’s Polytechnic campus, the sound of snapping fingers fills a classroom.

This noise indicates that the audience likes what it is hearing from the high school sophomore pacing around the front of the room, delivering a poem to her friends, family and other lovers of poetry. 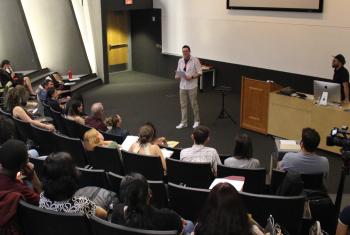 This was the scene at the first-ever Sparky Slam, held this past weekend inside the Agribusiness Center on ASU’s Polytechnic campus in Mesa.

The unique poetry slam format allowed the kids — ranging from 14 to 17 years old — to perform their written work in front of their teachers, and vice versa.

“I thought the format and size was perfect,” Sadiki said. “The crowd was just the right size because it wasn’t so big that we were nervous, but it wasn’t small either. Everyone got a chance to vibe off each other.”

Sadiki was the only poet, student or otherwise, to receive a unanimous perfect score from the four-person panel of judges. Her poem touched on the Black Lives Matter movement, police brutality and the current state of race relations in the country today.

“That was the first poem I’ve written in two years,” Sadiki said. “We had a diversity assembly at our school, and I was reminded about how many black lives were lost recently. I know that is something that can’t continue, and I felt the need to speak about it.”

Sadiki started writing poetry in seventh grade, being taught by the co-founder and executive director of Phonetic Spit, Tomas Stanton. Stanton served as the emcee for Saturday’s event, providing an energetic and upbeat source of energy throughout the evening.

Stanton emcees, hosts and teaches workshops throughout the Phoenix area in an attempt to advance the art of poetry in people of all ages. On this night, his primary duties included introducing each contestant, reading off their score after they were finished and filling in the assembled audience on some of spoken word’s nuances, such as why people snap while a poem is being read (they do so to show they like something in the poem).

“I am fortunate to do this quite often, but there’s always an element of surprise because it’s not a formal situation,” Stanton said. “You just never know who’s going to get up and what they are going to say. But whenever you give people a space to tell their stories, it is going to be a dope result.”

“I think we need this to become an annual event,” said Wendy Williams, the organizer of the slam and an assistant professor of English education. “The poems were really deep and personal, and I thought everyone got to be honest and real. I loved it.”

The Sparky Slam is just one way Williams is attempting to grow poetry throughout the ASU community.

Williams has been putting on different types of slams and workshops throughout the past year, and she will be teaching a “young authors’ studio” next semester. The studio will provide ASU students the chance to take an internship course for credit and allow them to act as mentors for children who come in for free writing workshops.

ASU professor elected to AAA Board of Directors

Steve Kaplan, director of the School of Accountancy and KPMG Professor of Accountancy at Arizona State University’s W. P. Carey School of Business, has been elected to the Board of Directors of the American Accounting Association. Kaplan will serve a three-year term as vice president of education with the American Accounting Association (AAA), which is the largest community of accountants in aca...

ASU professor elected to AAA Board of Directors

Steve Kaplan, director of the School of Accountancy and KPMG Professor of Accountancy at Arizona State University’s W. P. Carey School of Business, has been elected to the Board of Directors of the American Accounting Association. Kaplan will serve a three-year term as vice president of education with the American Accounting Association (AAA), which is the largest community of accountants in academia.

Kaplan has over 35 years of experience at ASU and is passionate about behavioral and ethical issues in decision-making involving accounting and tax information among managers, auditors, tax preparers and financial statement users. He has been an active member of the AAA for many years, recently completed a three-year term on the council and previously served as president of the Accounting, Behavior and Organizations Section of the AAA. He has also been the editor of the organization’s journal, "Behavioral Research in Accounting." 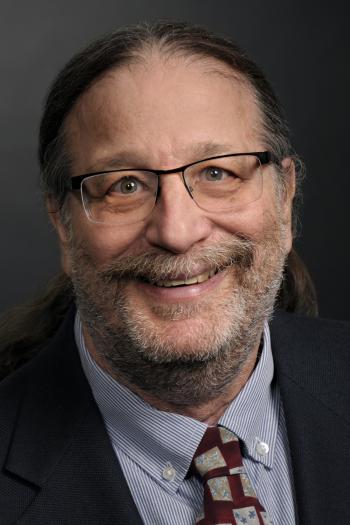 Kaplan has published over 70 articles in industry-leading academic journals, including the "Journal of Business Ethics", "Journal of Accounting and Public Policy," "Business Ethics Quarterly," "International Journal of Accounting Information Systems" and "Behavioral Research in Accounting." He is the recipient of a lifetime achievement award from the ABO Section. Twice a year he visits Monash University in Australia, helping accounting faculty and doctoral students develop accounting skills and methodology.

Kaplan received his bachelor’s degree in accounting from ASU and his master’s in accountancy and doctorate from the University of Illinois at Urbana-Champaign. He began teaching accountancy at ASU in 1981 and became director of the School of Accountancy in July 2016.