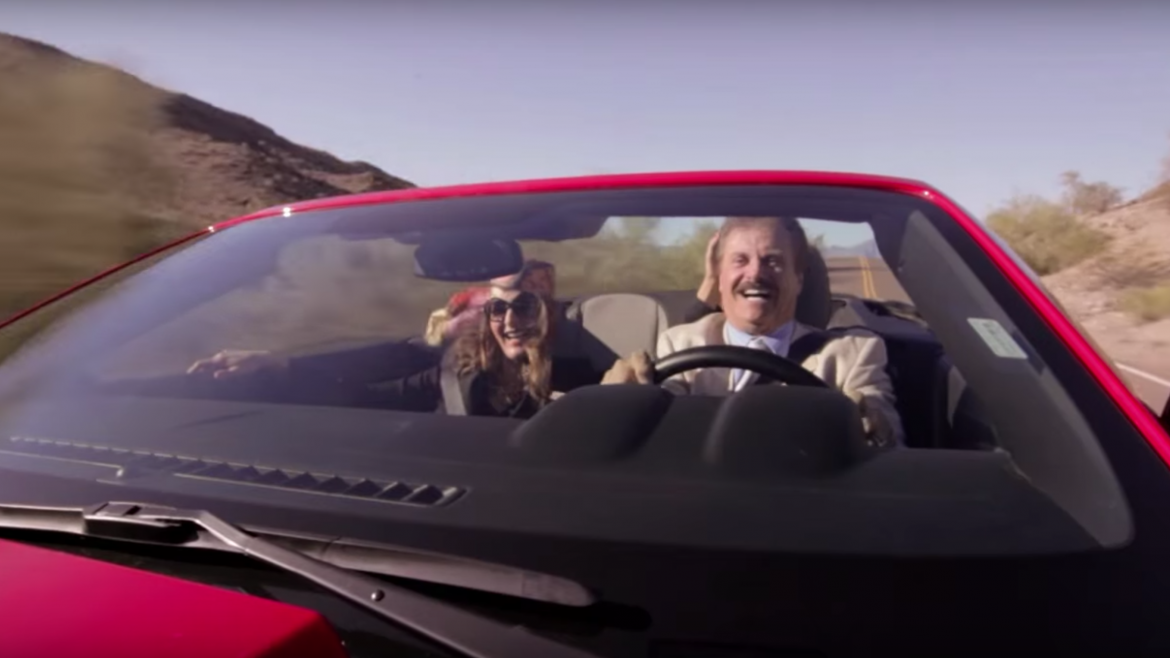 Movie starring George Lopez, Nia Vardalos uses innovative model to get made, with ASU students on crew and professor at the helm

On Friday, the film industry will see an unprecedented event with the premiere of “Car Dogs” at Harkins Theatres across the Valley: It’s the first time a film has been financed, made and released in a single, non-Hollywood locale, according to the film’s director, Adam Collis.

Collis said it was the culture of innovation that thrives at ASU that inspired him to take such a bold, new approach, leading to the creation of the Film Spark Feature Film Internship Program.

The idea for the program came to him in 2009 after his students’ rave review of a video-conference session he arranged with the cinematographer of “The Hangover” films. Since then, Collis has connected ASU with four Oscar winners; five Oscar nominees; three major studio chiefs; the presidents of the Academy of Motion Picture Arts and Sciences and the Directors Guild of America; the producers of “Batman Begins,” “The Help,” “Star Trek,” “Requiem for a Dream,” “Foxcatcher,” “Moneyball,” “Boyhood” and “Dazed and Confused”; and many other active film-industry professionals.

Work on the production commenced in summer 2012 when Collis and former ASU film professor F. Miguel Valenti, a producer on the film, introduced students to the “Car Dogs” script, breaking it down to its budgeting and production elements. After Collis spent a year securing independent funding, the film was finally greenlit and shot over 21 days in summer 2013. Some 271 students applied for jobs on the crew, of which 85 were given internship opportunities in the form of a 10-week, one- to six-credit class.

“It was a lot of fun with the cast and crew fully understanding that this film was in conjunction with the ASU Film Spark Program,” said Janaki Cedanna, ASU clinical assistant professor of film who ran post-production. “As a result, there were teaching moments every day, and it created a fun and exciting atmosphere.”

Actor Chris Mulkey plays the father of Mark Chamberlain in “Car Dogs.” When filming began, he wasn’t aware there would be students working on the crew. He remembers telling Collis, “This crew seems really young,” but at the same time being impressed by their professionalism.

Collis told him they were ASU students.

“I said, ‘They're amazing. They're doing great.’ They helped me run my lines and learn my stuff. It's a great program at ASU,” Mulkey said.

Film Spark has produced three feature films since 2012: “Car Dogs”; “Justice Served,” written and directed by Marvin Young (Young MC), which was shot in the summer of 2014 and will be released this year; and “Postmarked,” a dark comedy written by ASU Film Lecturer Gene Ganssle and playwright Ron Hunting, which was filmed in the summer of 2015 and directed by Ganssle with support from ASU (Ganssle said the production is working on a deal for distribution to release the film later this year). 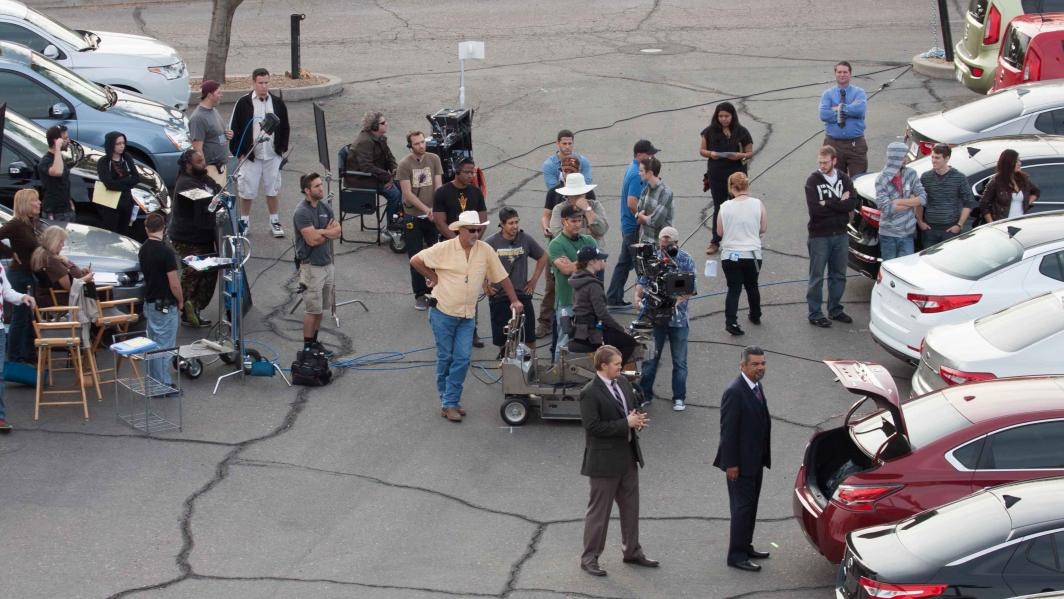 ASU students work on the set of "Car Dogs" alongside veteran Hollywood professionals during summer 2013. The film opens Friday in select Harkins Theatres. Click here for an annotated version of this photo showing where some of those students are today. 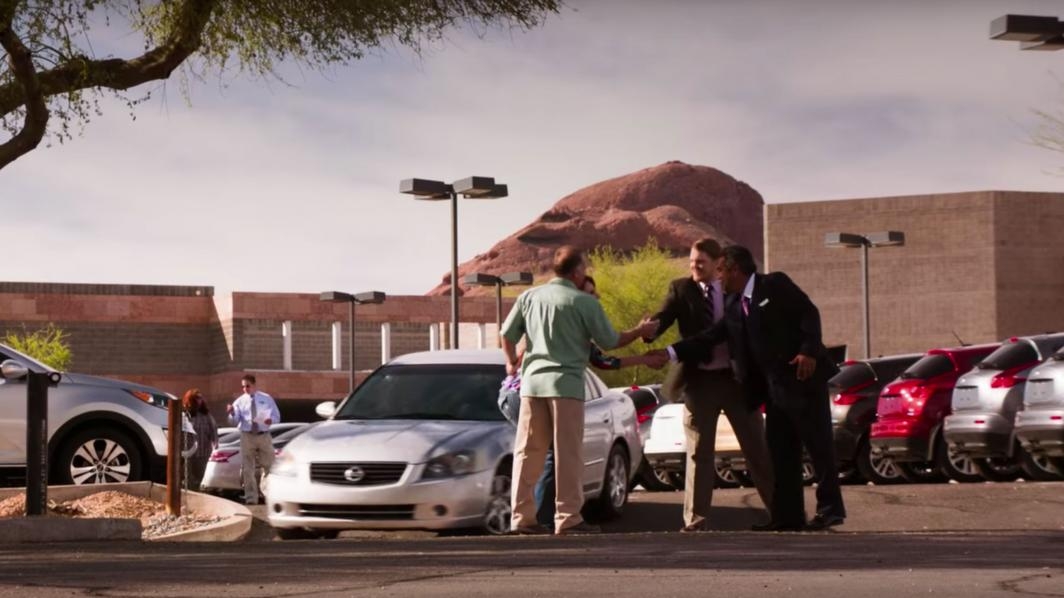 The plot of "Car Dogs," which was filmed in the Valley, involved a challenge to sell 300 cars in one day in order to win a new dealership location. 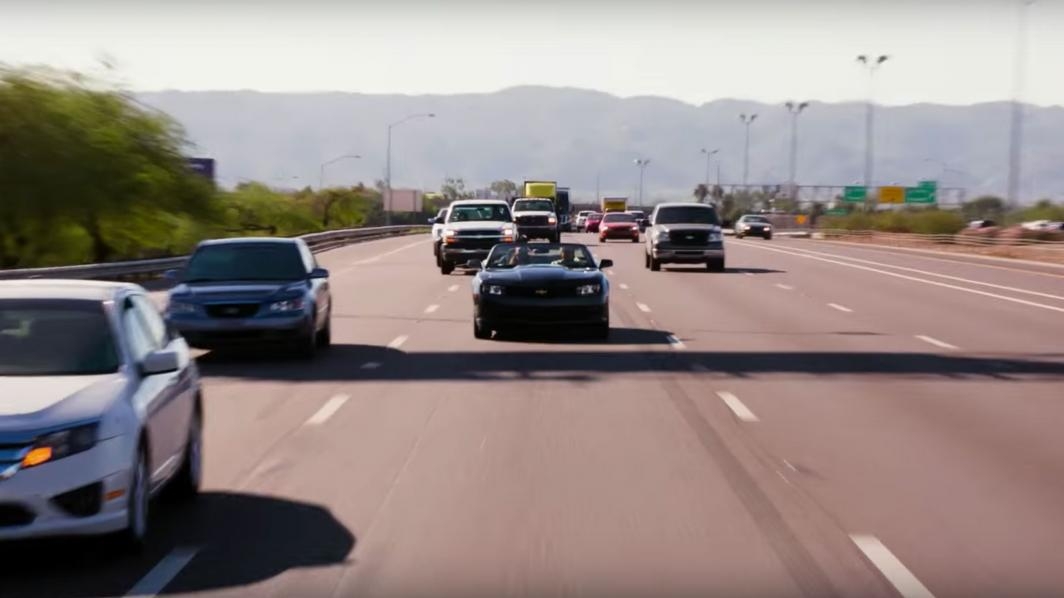 The production allowed students to experience filmmaking outside the classroom. 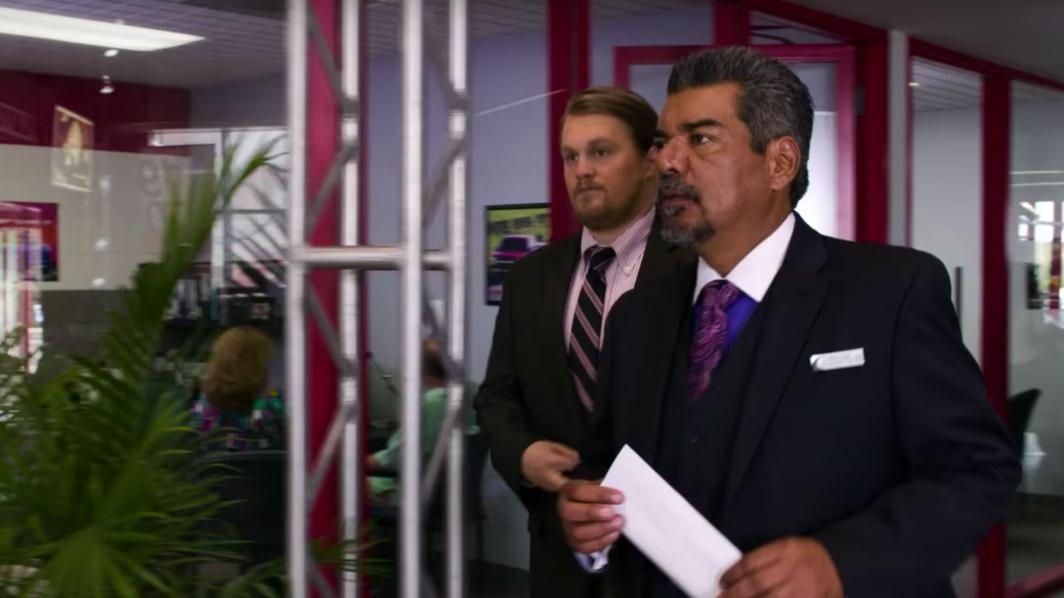 Christian (right, played by George Lopez) is one of the car salespeople scrambling to hit the quota by the 5 p.m. deadline. 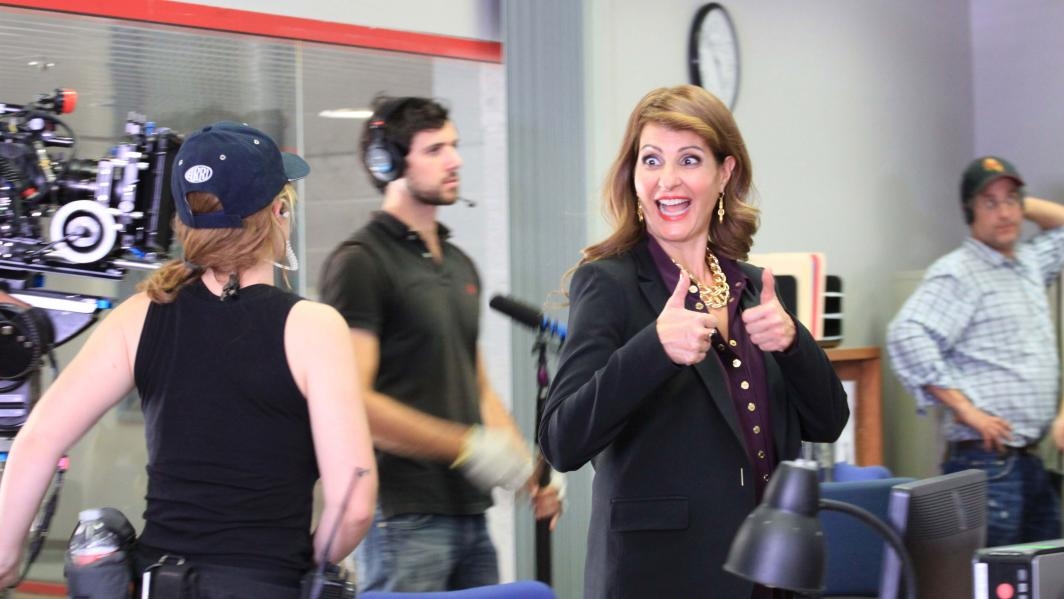 A behind-the-scenes photo featuring actress Nia Vardalos shows the camaradie on the set.

Collis hopes the success of Film Spark and the movies it produces will serve as a point of proof that Hollywood can and should bring more motion picture endeavors to Arizona, where it can leverage resources that aren’t available elsewhere.

“I’m not saying we’re the first movie to launch regionally, but what we’re doing that is unique is that we’re launching our film in conjunction and collaboration with the biggest and most innovative school in the nation … and with Harkins, who is the Phoenix-based theater exhibitor that’s based out of Arizona,” Collis said.

He likens the process to building a rocket.

“We’ve effectively built our rocket, that’s the movie,” he said. But unlike other filmmakers, who have to compete with thousands to sell their “rocket” to distributors who will “launch” it for them, Collis and his team built their own launch pad through Film Spark.

“We’re going to get that rocket so high,” Collis said, “that other people around the country will look up and say, ‘We want to bring that movie to our chain.’”

Click here for Harkins movie times, and watch the "Car Dogs" trailer below:

Words can heal, and an Arizona State University professor is creating a way for young people to harness the power of poetry in their own and others’ lives.Wendy Williams, an assistant professor of English education in the College of Integrative Sciences and Arts, has organized the first “Sparky Slam,” a free spoken-word poetry event for high school students to be held Saturday at ASU’s Pol... 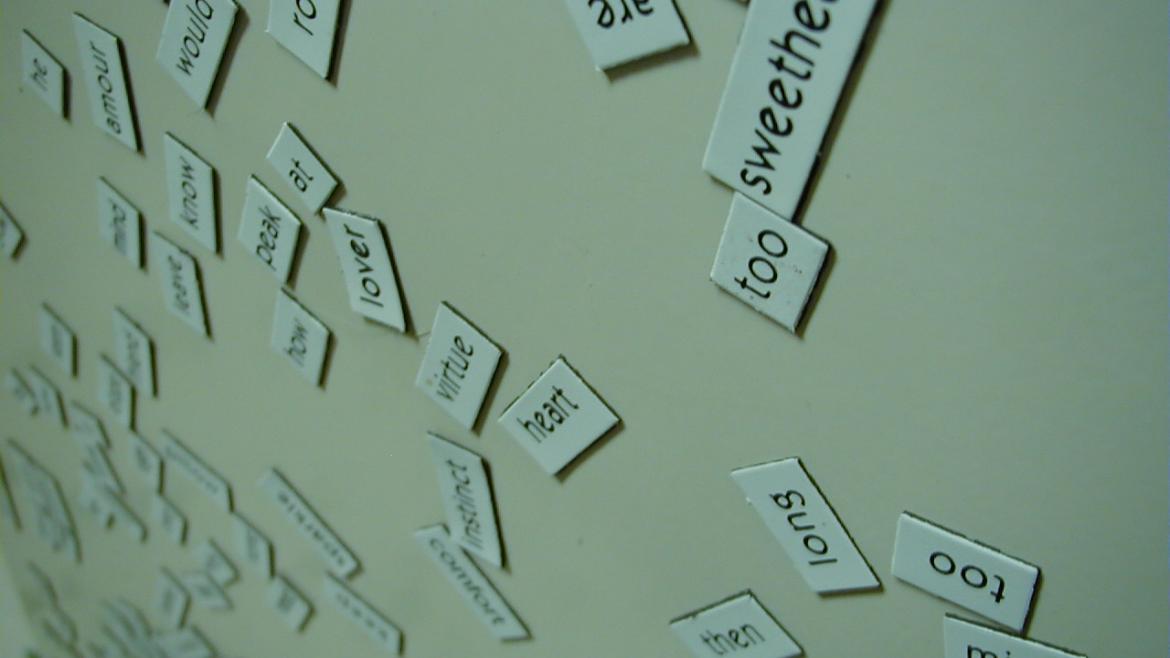 Polytechnic campus
'Sparky Slam' poetry event will give teens a supportive space for expression.
ASU professor says there are benefits in both in-, out-of-school writing groups.
March 23, 2017

Words can heal, and an Arizona State University professor is creating a way for young people to harness the power of poetry in their own and others’ lives.

Wendy Williams, an assistant professor of English education in the College of Integrative Sciences and Arts, has organized the first “Sparky Slam,” a free spoken-word poetry event for high school students to be held Saturday at ASU’s Polytechnic campus in Mesa.

At the slam, students and teachers will get a chance to express their poetry in a supportive group setting, according to Williams, who studied the benefits of youth poetry and writing. 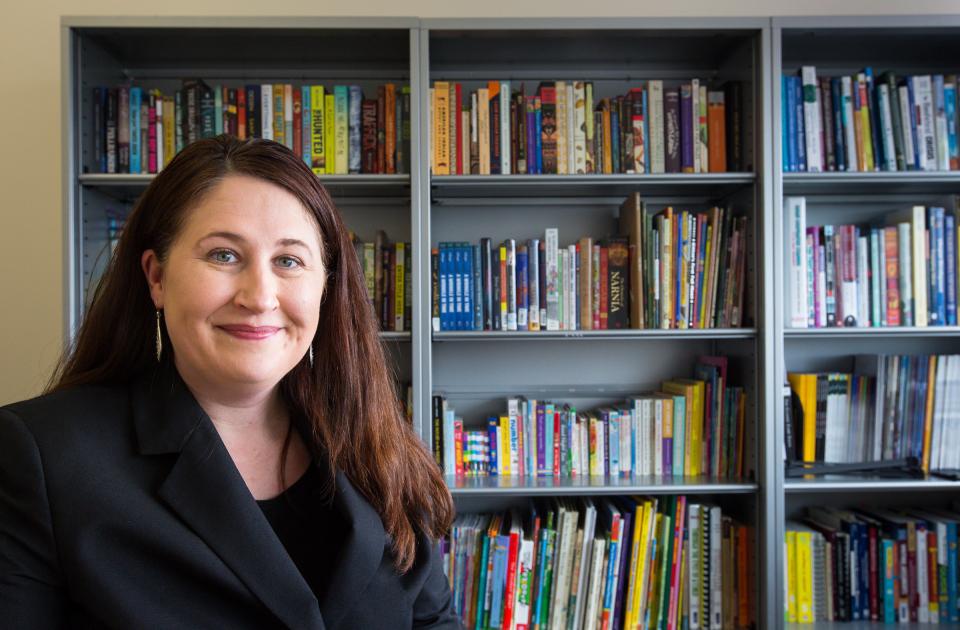 Wendy Williams, an assistant professor of English education at ASU's Polytechnic campus, has created a poetry slam for high school students to be held at 6 p.m. Saturday, March 25. Photo by Charlie Leight/ASU Now

“I want to create a space at ASU that supports youth spoken-word poetry, and I want students to feel comfortable coming to ASU, because for some of them it will their first time stepping foot at a university and I want them to realize it’s not a scary place,” she said.

Question: In your research, what did you find out about young people and poetry?

Answer: I did a yearlong study of a youth spoken-word poetry group in Arizona, and I was so impressed with how much love was in this group. It was a place of healing. I saw poets share stories about abuse, about losing a parent, just really painful stories sometimes. But they would use the medium of spoken-word poetry to heal.

At the end of that study, I ended up sharing a poem of my own about my mom dying and it really helped me to heal, and I understood firsthand that this is a powerful medium.

A lot of the benefits were associated with the group and the atmosphere the group leader was able to create. The next year I went into a high school poetry club, and I found that while the out-of-school poetry group was more effective at getting kids to open up, the high school club had them writing more regularly.

There are benefits to both situations.

Q: Are there connections to rap music?

A: That’s what everyone wants to know. I’m an outsider — I don’t study rap or listen to it. I came to youth-literacy research through heavy metal. When I was in high school I was in a band, and I ended up performing in my high school talent show so when I was a high school teacher I wanted to start a talent show to show off their talents. I had two youth rappers who were amazing. That’s how I came to out-of-school research.

There are connections between rap and poetry — the rhythms and use of rhyme. A lot of people do both, and both spoken-word and rap are part of hip-hop culture.

I’m more concerned with writing practice — where do they write, when, why.

A: One thing that has surprised me about all this youth-literacy research is how much kids write outside of school when they get to choose the format and the topic and they can perform for an authentic audience. This is something we need to pay attention to in education. We need to give them choice in format and topic. This is what they choose to do when they’re not with us. They’re clever about it and resourceful. They’re able to find these groups and audiences and able to teach themselves complicated music-making software. When they want to learn something, they do it.

Next semester, I’m teaching a “young authors’ studio,” where ASU students will take an internship course for credit and act as mentors to kids who come in from the community for free writing workshops on Saturday mornings. There will be loose themes like art or music, and the ASU students will develop mini lessons.

“Sparky Slam” will be held from 6 to 8 p.m. Saturday in room 134 of the Agribusiness Center at ASU’s Polytechnic campus. Students can come at 4:30 p.m. to get help writing or revising their work. The event will be moderated by Tomas Stanton, an ASU student and director of the youth poetry group Phonetic Spit. For details, click here.

For information on the Young Authors Studio course, contact Williams at wendy.r.williams@asu.edu.