Linda Hogan (Chickasaw), a prominent poet, novelist, essayist and environmentalist, is the featured speaker in ASU’s Simon Ortiz and Labriola Center Lecture on Indigenous Land, Culture, and Community for spring 2017. Hogan will give a reading and narrative journey through her extensive body of work this Thursday, March 23 at the Heard Museum, 2301 N. Central Avenue in Phoenix. The event is free of charge and open to the public. 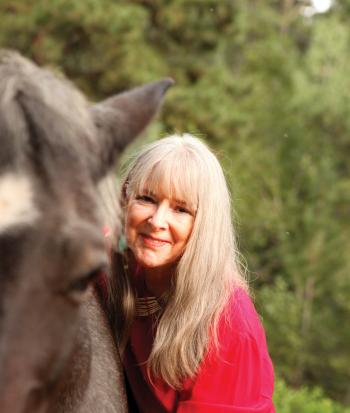 Hogan is the author of the poetry collections "Calling Myself Home" (1978); "Daughters, I Love You" (1981); "Eclipse" (1983); "Seeing Through the Sun" (1985), which won the American Book Award from the Before Columbus Foundation; "Savings" (1988), "The Book of Medicines," a National Book Critics Circle Award finalist (1993); "Rounding the Human Corners" (2008); "Indios" (2012); and "Dark. Sweet. New and Selected Poems" (2014). According to the Poetry Foundation, Hogan's poetry primarily deals with the environment and eco-feminism, the relocation of Native Americans, and historical narratives, including oral histories.

Her lyrical work is considered to be work of literary activism, and it contains Native spirituality and indigenous knowledge systems in all genres. Her novels include "Mean Spirit" (1990), "Solar Storms" (1995), "Power" (1998), and "People of the Whale" (2008).

Hogan's nonfiction includes a collection of essays on environment, "Dwellings, A Spiritual History of the Land" (1995); and "The Woman Who Watches Over the World: A Native Memoir" (2001). In addition, she has, with Brenda Peterson, written "Sightings, The Gray Whales' Mysterious Journey" (2002) for National Geographic Books, and edited several anthologies on nature and spirituality. She has written the script, "Everything Has a Spirit," a PBS documentary on American Indian religious freedom. In 2007, Hogan was inducted into the Chickasaw Nation Hall of Fame.

She has been awarded a Pushcart Prize, the PEN Thoreau Prize, a National Endowment for the Arts Fellowship, a Guggenheim Fellowship, a Lannan Foundation Fellowship, and lifetime achievement awards from Native Writers Circle of the Americas, The Wordcraft Circle, and The Mountains and Plains Booksellers Association, along with many other honors and recognitions from state and national arts organizations. She is the first minority woman to have been named a full professor at the University of Colorado, where she is currently professor emeritus.

The Simon Ortiz and Labriola Center Lecture on Indigenous Land, Culture, and Community at Arizona State University addresses topics and issues across disciplines in the arts, humanities, sciences, and politics. Underscoring indigenous American experiences and perspectives, this series seeks to create and celebrate knowledge that evolves from an inclusive indigenous worldview and that is applicable to all walks of life.

ASU sponsors include the American Indian Policy Institute; American Indian Studies Program; Department of English; School of Historical, Philosophical, and Religious Studies; Indian Legal Program in the Sandra Day O'Connor College of Law; Labriola National American Indian Data Center; School of Art in the Herberger Institute for Design and the Arts; and Women and Gender Studies in the School of Social Transformation. The Heard Museum is a community partner.

Business, meet Arizona State University’s engineers. This is what we can do for you.That was the intent behind “Engineering the Future: Entrepreneurship, Partnerships and a Commitment to Innovation,” an event held Tuesday to introduce and promote collaboration between industry and the Ira A. Fulton Schools of Engineering.The Phoenix Business Journal co-sponsored the event.“We wanted to sha... 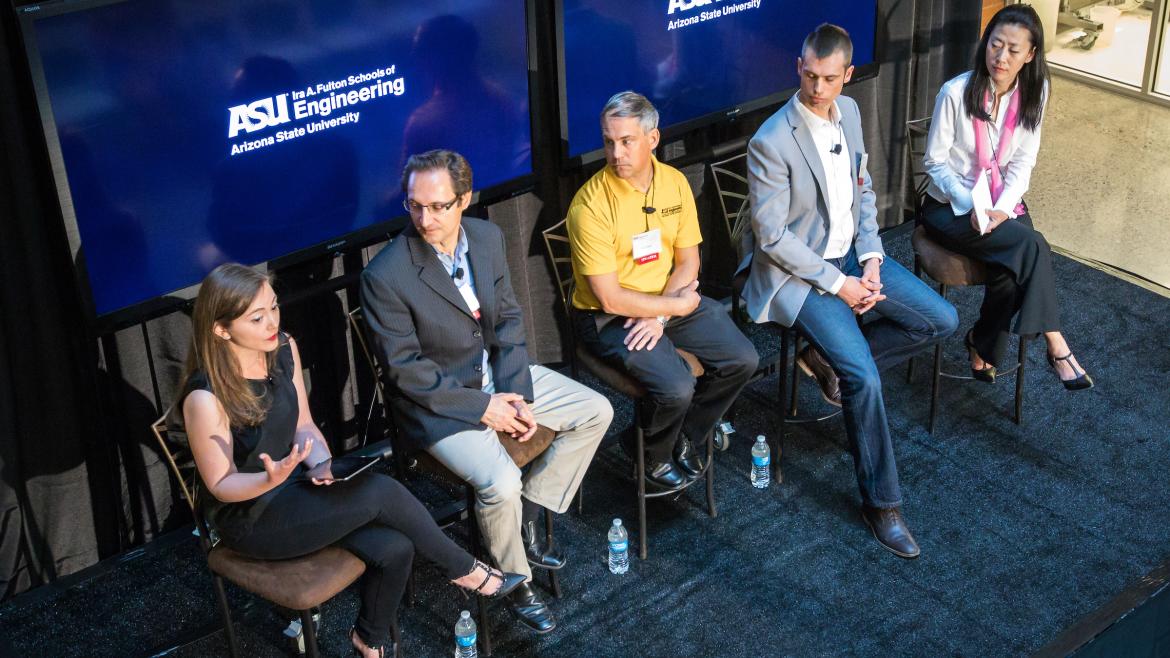 Event aims to promote solutions-based collaboration between companies and Ira A. Fulton Schools of Engineering

Business, meet Arizona State University’s engineers. This is what we can do for you.

That was the intent behind “Engineering the Future: Entrepreneurship, Partnerships and a Commitment to Innovation,” an event held Tuesday to introduce and promote collaboration between industry and the Ira A. Fulton Schools of Engineering.

“We wanted to share with you some of those factors that make us number one in innovation,” moderator Ji Mi Choi, associate vice president of Strategic Partnerships and Programs, Office of Knowledge Enterprise Development, told the crowd of about 200. “We do invite partnership with you.”

Engineering Dean Kyle Squires told attendees the school looks forward to following up with them.

“We want to hear from you, companies and organizations we can move forward,” Squires said. 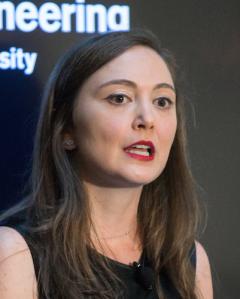 Nadya Bliss, director of the Global Security Initiative and a professor in the School of Computing, Informatics and Decision Systems Engineering, discussed cybersecurity. With ever more devices, vehicles and facilities connected to the internet, there is simply more surface to be attacked, she said.

“Listen to computer scientists,” Bliss said. “We know what we’re talking about.”

Bliss suggested that, in her case, long-term projects with clearly defined goals are a good fit. 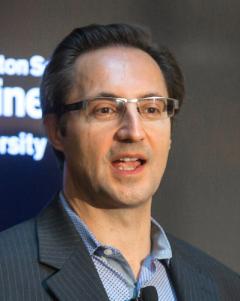 Marco Santello, director of the School of Biological and Health Systems Engineering, studies how the brain controls and learns movements.

He is working with partners, including the Mayo Clinic and roboticists, on the unmet needs of amputee patients.

Thomas Sugar, a robotics engineer and associate professor in the Polytechnic School, also works on improving mobility with orthotics and prostheses for stroke victims. 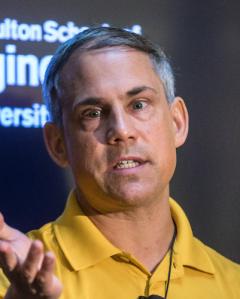 He cited 18 roboticists hired by the university. Sugar also works on wearable robotics for industry, which allow people to work longer and with less physical strain.

“They’re too big and too expensive,” he said. “What’s really happening are these small systems that improve mobility.”

Zachary Holman, an assistant professor in the School of Electrical, Computer and Energy Engineering, works on silicon solar cells, solar power storage and efficiency. He recently set an efficiency record for solar cells.

ASU has 10 faculty working on solar technology. (Most universities have one, according to Holman.) 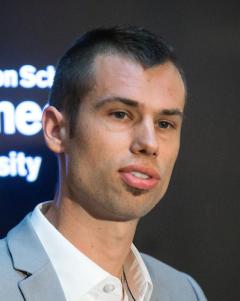 Holman co-founded Swift Coat, an ASU spin-off company that deals with nanoparticle coating and is a finalist in the ASU Innovation Open.ASU has 10 faculty working on solar technology. (Most universities have one, according to Holman.)

“We’re well-versed in the process of talking to companies,” he said.

Sergio Gazic, bioscience portfolio manager at the Arizona Commerce Authority, asked the panel what the biggest challenge of starting a company and taking inventions to market is.

Marketing and sales are difficult, Sugar said. “Just because you have the best technology doesn’t mean it’s going to get sold,” he said.

Engineers don’t know business, Holman said, leaving them with two options: learn business themselves, or partner with someone who is knowledgeable.

A representative from an architecture firm asked the engineers if they work with artists or architects.

Holman said he found flat panels on roofs unattractive, and asked to meet with her after the event. 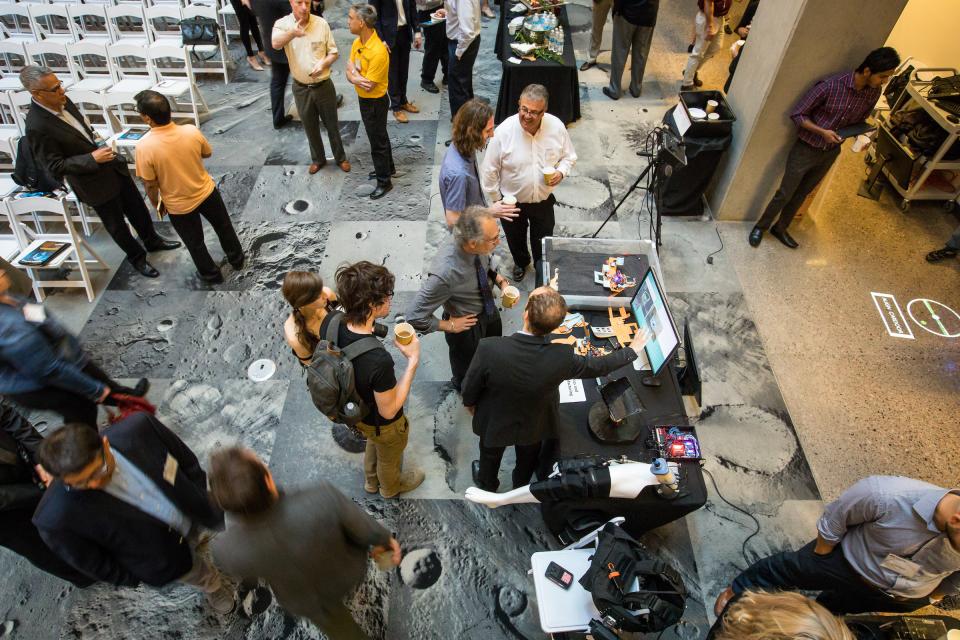 In addition to faculty speakers, the "Engineering the Future" event Tuesday featured displays promoting some of the work at the Ira A. Fulton Schools of Engineering. Photo by Charlie Leight/ASU Now