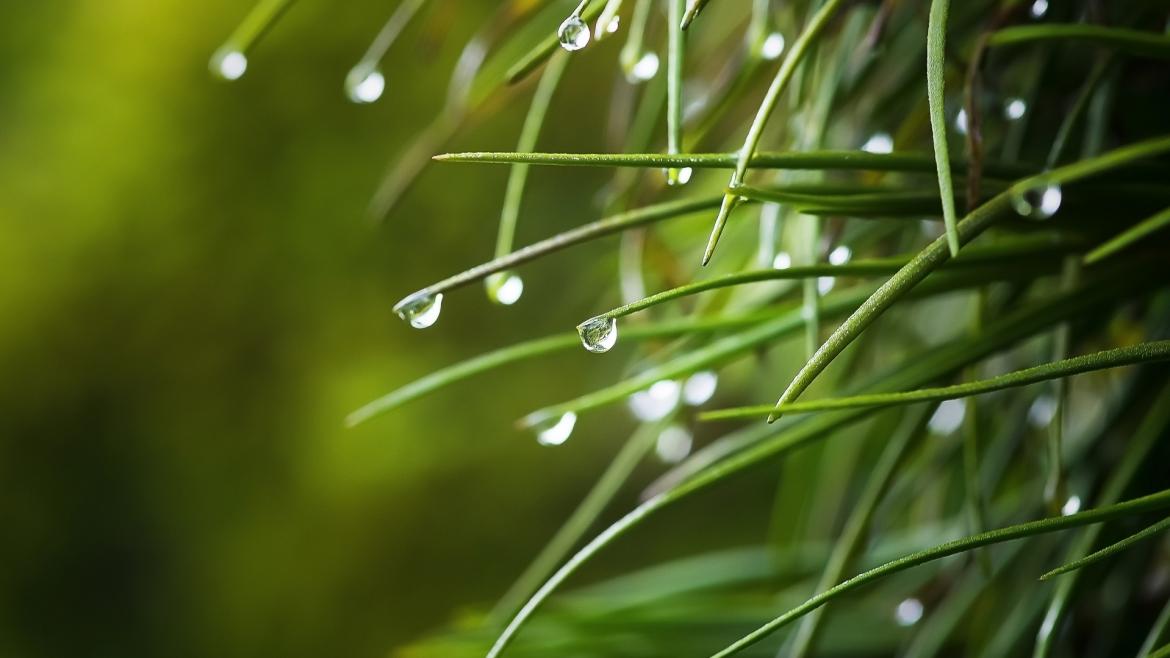 Environmental news can be all too depressing, with headlines punctuated by the drumbeat of extinction and destruction.

There are occasional bright spots. One of them occurred this month when Arizona State University announced it is powering up its conservation biology program by adding seven professors of practice to the faculty as part of a partnership between the university’s Center for Biodiversity Outcomes and Conservation International, the biggest American conservation organization.

The ASU center takes a multidisciplinary approach to find solutions for the long term — not just the science of saving species that one might think of with the field, but also engaging with business and reaching out to groups underrepresented in conservation biology.

It’s a practical approach that fits well with that of Conservation International. The nonprofit has helped establish 1,200 protected areas across 78 countries and protected more than 730 million hectares of land, marine and coastal areas.

The partnership’s goals are threefold:

Biodiversity is “the natural capital that we need for human well-being,” said Leah Gerber, director of the Center for Biodiversity Outcomes, itself a partnership between ASU’s Julie Ann Wrigley Global Institute of Sustainability and the School of Life Sciences.

“Our partnership with Conservation International is a mechanism to integrate scholarship across campus in interdisciplinary teams to tackle (those) three general goals,” Gerber said.

ASU President Michael Crow addressed the seven new professors of practice who will be teaching, lecturing, mentoring and leading fieldwork in Arizona; Washington, D.C.; and around the world.

This will not be a sequestration of academia away from the front lines, Crow told them. They will rush towards the battle, not away from it.

“Right now we’re in a race, a race that will not be easily won,” Crow said. “The forces of nature and the negative force of our impact on nature are accelerating. The acceleration of those forces are such that they will contribute to our need to have something we don’t have, which are better theories, better ideas, better tools, better solutions, better implementation, better translation — none of which comes naturally. ...

“We don’t have preconceived notions of what it all means or how it all works out — we just hope we can work it out. It’s meant to be catalytically disruptive to how we think and how we work and what we’re doing.” 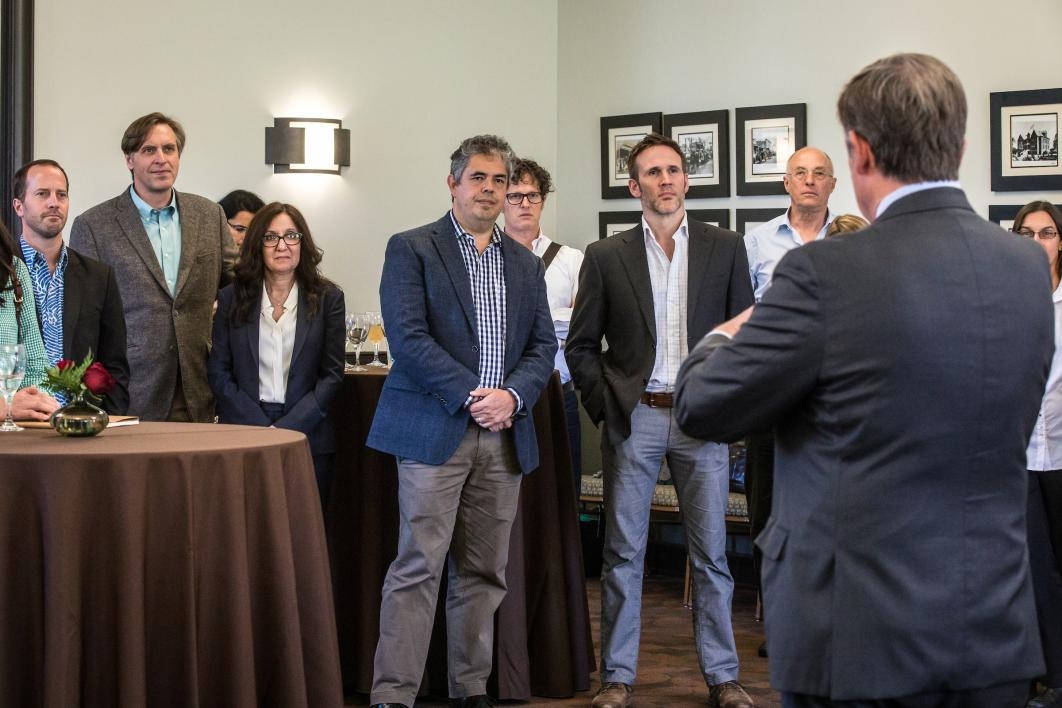 ASU President Michael Crow (right) addresses a reception honoring the seven new professors of practice from Conservation International's Betty and Gordon Moore Center for Science who will be working with ASU's Center for Biodiversity Outcomes, at the University Club in Tempe on March 16. 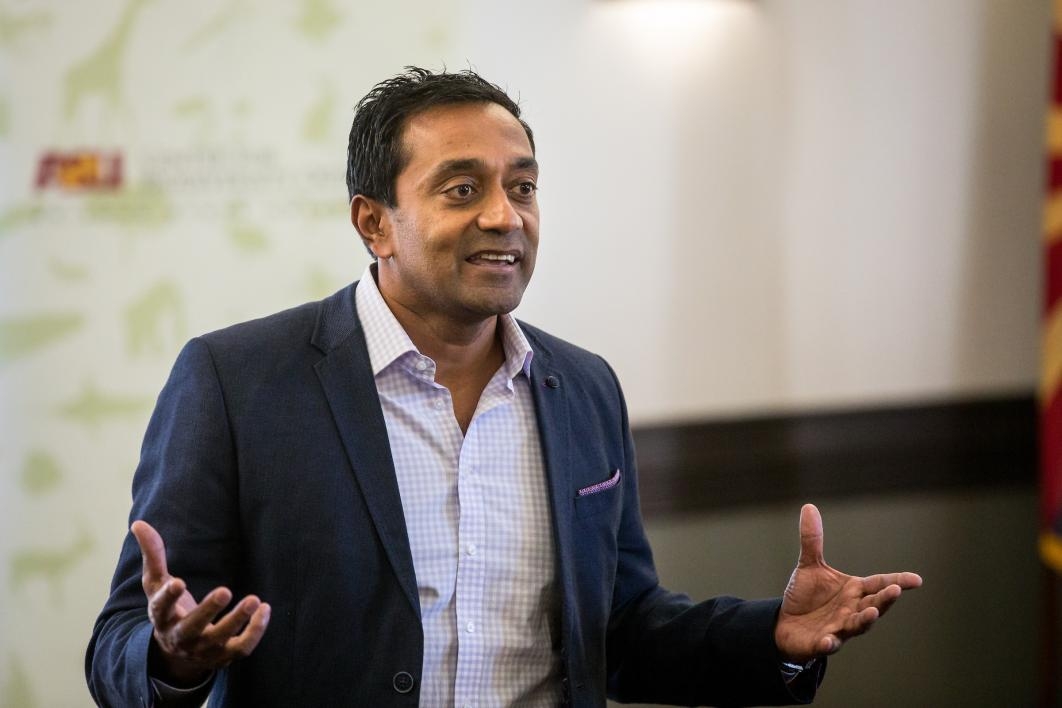 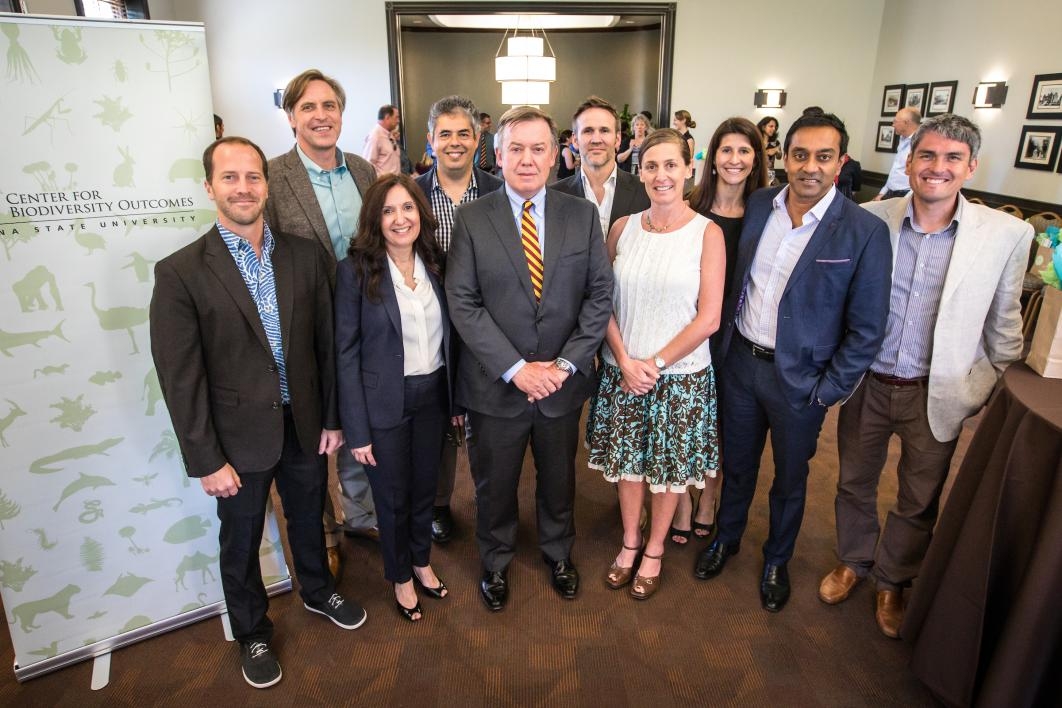 ASU President Michael Crow (front center) and leaders from ASU's Center for Biodiversity Outcomes and Conservation International pose for a group picture at the reception.

The exact nature of how the partnership will shake out will be determined later. The immediate goal is to leverage the size and resources of the university with the expertise of the nonprofit to scale up the war to save the natural world.

“What I’m looking for a 10-times impact, a 100-times impact in the work that we do,” said M. Sanjayan, executive vice president and senior scientist at Conservation International. “The only model I have for making that happen is through science. ...

“You will hold us to the truth. You will be honest with us. We can try things. We can experiment, free from preconceived notions and find ways to take the work we do in real places and create that massive impact. ... This is the beginning.”

“When we met, we talked about it in various different ways and settled on three main goals we think we can achieve together, given ASU’s incredible academic capacity and our work to do conservation on the ground,” Raik said. “We talk a lot of research to policy or research to action, but it’s this kind of partnership that’s making it happen.”

It’s a practical partnership that will yield measurable results, Gerber said. One of the most important goals is building the next generation of conservation biologists. It’s important to show students they can have a rewarding, successful career in the field.

“Many of these students want to be practitioners working out in the real world and working on the ground to solve problems,” she said. “They’re actually going to be taught by the people who are doing that.

“I anticipate not only achieving quantitative outcomes within each of those domains but also creating a model for how these types of non-governmental/academic partnerships can collaborate in a way that mobilizes our respective capacity to tackle the most pressing environmental challenges of the 21st century.”

A message posted outside the Memorial Union Ventana Ballroom on Monday night forbade the presence of posters and signs at a student-organized talk being given by DeRay Mckesson, one of the most outspoken members of the Black Lives Matter movement.The international activist movement that began in 2013 with a Twitter hashtag in response to the acquittal of George Zimmerman in the shooting death of ... 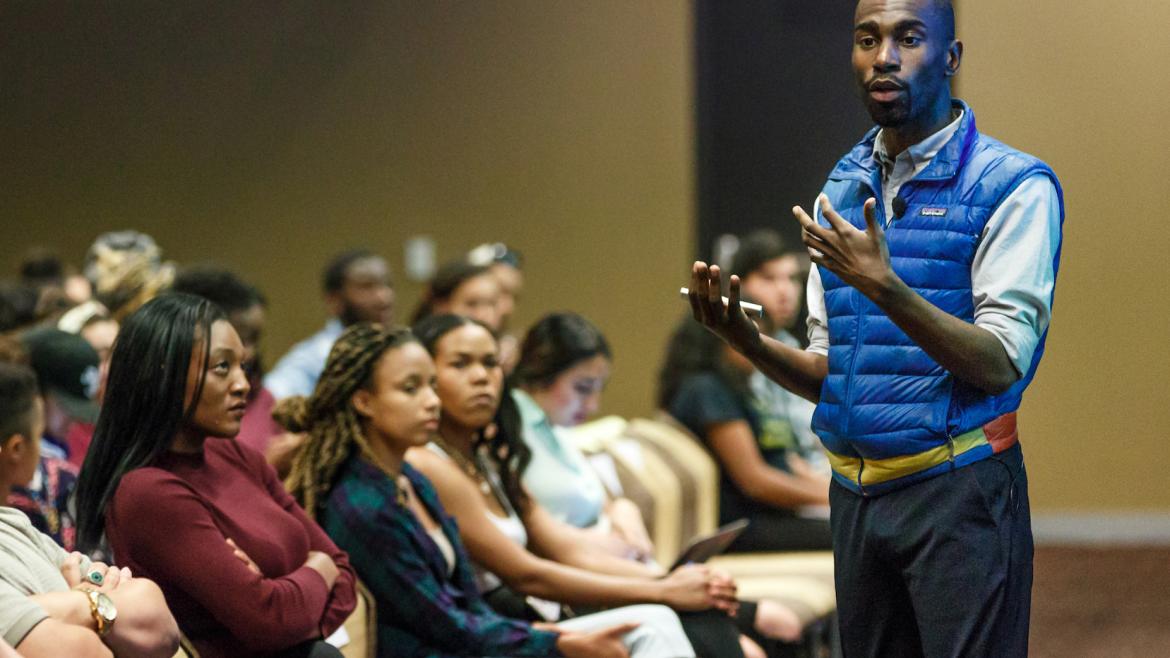 A message posted outside the Memorial Union Ventana Ballroom on Monday night forbade the presence of posters and signs at a student-organized talk being given by DeRay Mckesson, one of the most outspoken members of the Black Lives Matter movement.

The international activist movement that began in 2013 with a Twitter hashtag in response to the acquittal of George Zimmerman in the shooting death of African-American teen Trayvon Martin has been at the center of a politically and socially charged conversation concerning violence and perceived systemic racism toward black people in the U.S. criminal justice system since.

But the event on ASU’s Tempe campus where Mckesson spoke to a group of roughly 350 students, faculty, staff and members of the community was peaceful and informative, covering topics from the power of social media, to the importance of engaging others in the cause, to productive next moves.

“As organizers, we give you the language and the tools” to enact positive change, Mckesson told the crowd, referring to himself and other influential activists associated with Black Lives Matter. “But you have to carry this stuff with you every day, at work, at home” and everywhere else.

The event was organized by students from various groups including Undergraduate Student Government, Rainbow Coalition and Black African Coalition.

Geography and urban planning undergrad and president of Rainbow Coalition Gabriel Leon said having someone speak to students about activism has “the power to deepen and broaden their perspective of the world.”

Mckesson began his talk with images from the 2014 protests in Ferguson, Missouri, that followed the shooting death of another young black man, Michael Brown, by white police officer Darren Wilson. If it weren’t for social media, Mckesson said, nobody would have known Brown’s body lay in the street for four hours before being removed by medical personnel.

Mckesson himself has more than 750,000 Twitter followers. He praised social media in general for its ability to allow everyday people to tell the story of what’s really going on around them — “telling the truth in public,” as he calls it.

He addressed the issue Monday night, saying, “There’s very little data on police.” He added that most of that data comes from an aggregate of newspaper reports, which is a problem because it can be inaccurate.

Although he preferred to avoid commenting too much about President Donald Trump (“because he’s stressing me out right now,” he said), Mckesson did speak about having met with former presidential hopefuls Hillary Clinton and Bernie Sanders, as well as former President Barack Obama, to advance the mission of Black Lives Matter.

He stressed the importance of activists having a presence and voicing their concerns both amongst each other and to people in power.

He proved that conviction in 2016 when he ran for mayor of his hometown, Baltimore. Though he lost, the experience — during which he sometimes spoke to neighborhood crowds in living room gatherings — served as “a deep reminder of the power of organizing at the local level.”

At the close of his talk, Mckesson told the audience that they have “the power to stand up right now and do something beautiful” through protest, and that the most compelling data they have to back up their cause is their own lives.

Top photo: Educator and civil rights activist DeRay Mckesson speaks to a group of students Monday in the Memorial Union on ASU's Tempe campus. Mckesson is a leading voice in the Black Lives Matter movement, and his speech focused on campaign strategies, the origins of Black Lives Matter and the role of activism in the current political climate. Photo by Anya Magnuson/ASU Now