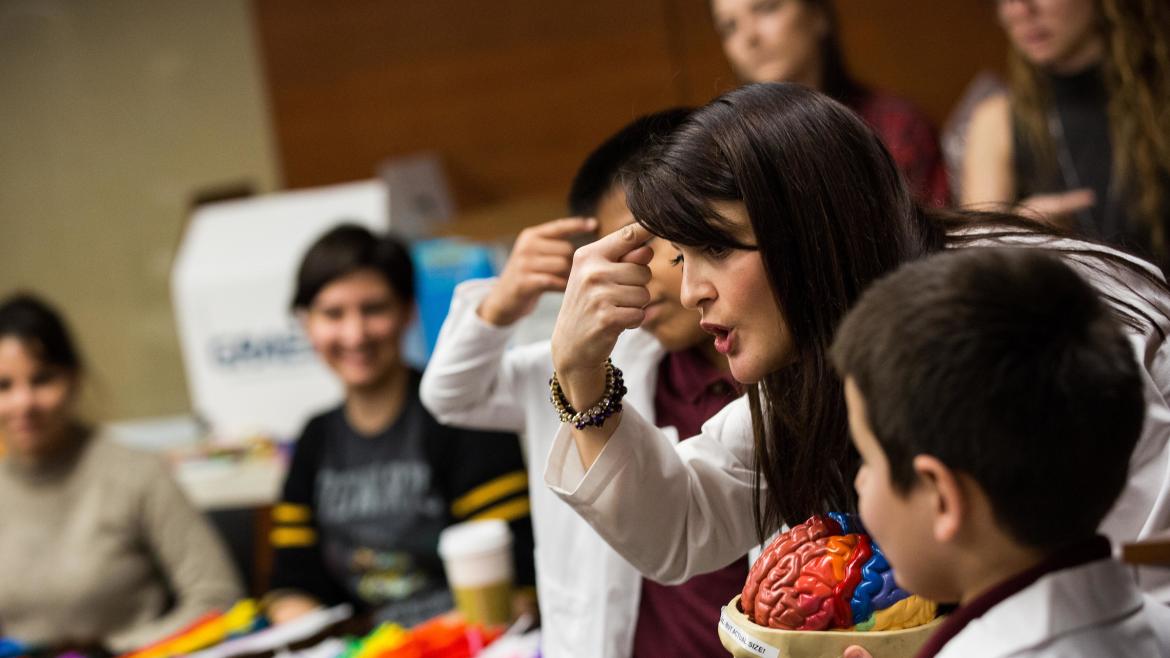 Arizona State University psychology professor and neuroscientist Heather Bimonte-Nelson recently found herself surrounded by hundreds of students examining brains, which wouldn’t have been unusual except that they were third- and fourth-graders with handfuls of Play-Doh.

Hoping to draw children into the field and inspire the next generation of scientists, Bimonte-Nelson, along with her laboratory and team of students and other faculty, host events like these to get kids excited about brain research and other STEM fields. At a time when illnesses like Alzheimer’s, CTE and other neurodegenerative diseases are on the rise, the study of neuroscience has never been more important.

The 11th annual ASU Brain Fair was held earlier this week inside the Psychology building on ASU's Tempe campus.

“I came up with the idea as a way to start drawing kids into science,” Bimonte-Nelson said. “It is one thing to come in and talk about (brains), but it’s another to bring in the brains and models to show them. It’s really a great way to relate science to them in ways that are very straightforward.”

The model has been a hit with both the students and their teachers. The children, ranging from 8 to 10 years old, bounce around the floor as they compare their Play-Doh creations.

A pair of undergraduate students monitor a microscope station where the kids peer through a lens and record what they see. They also gather special certificates, pencils and brain-shaped erasers — tokens to take home and help remember the fair long after it ends.

“The kids come from underprivileged backgrounds, and for a lot of them it’s their first time coming on a field trip,” said Stephanie Koebele, a fourth-year graduate student in the Bimonte-Nelson laboratory who both helped at this event and has done many similar ones on her own. “They just look so amazed and have so many questions. It’s fun to share that with them."

The activities at the fair are focused on neuroscience and the nervous system specifically, an area that ASU researchers are working hard on exploring further.

According to Bimonte-Nelson, area head of ASU’s Behavioral Neuroscience ProgramThe Behavioral Neuroscience Program is part of the Department of Psychology in the College of Liberal Arts and Sciences., the brain’s function is impacted by so many variables that have yet to be understood. This means that we also have a long way to go before fully understanding human emotions and behaviors.

She said this is why influencing and teaching the next wave of researchers is so important.

“The most important thing I do is mentor the next generation of scientists,” Bimonte-Nelson said. “That is what’s most special to me. I think training the next generation is going to have the biggest impact on future discoveries in the brain, behavior and other functions throughout the body.”

One of those future discoveries they are hoping to make surrounds the ever-growing Alzheimer’s disease. According to Bimonte-Nelson, more than 120,000 people in the state of Arizona are currently suffering from Alzheimer’s, a statistic that includes about 50 percent of residents over the age of 85.

Bimonte-Nelson is a member of the Arizona Alzheimer's Consortium, an organization that has been working since 1998 to find a cure for the disease. 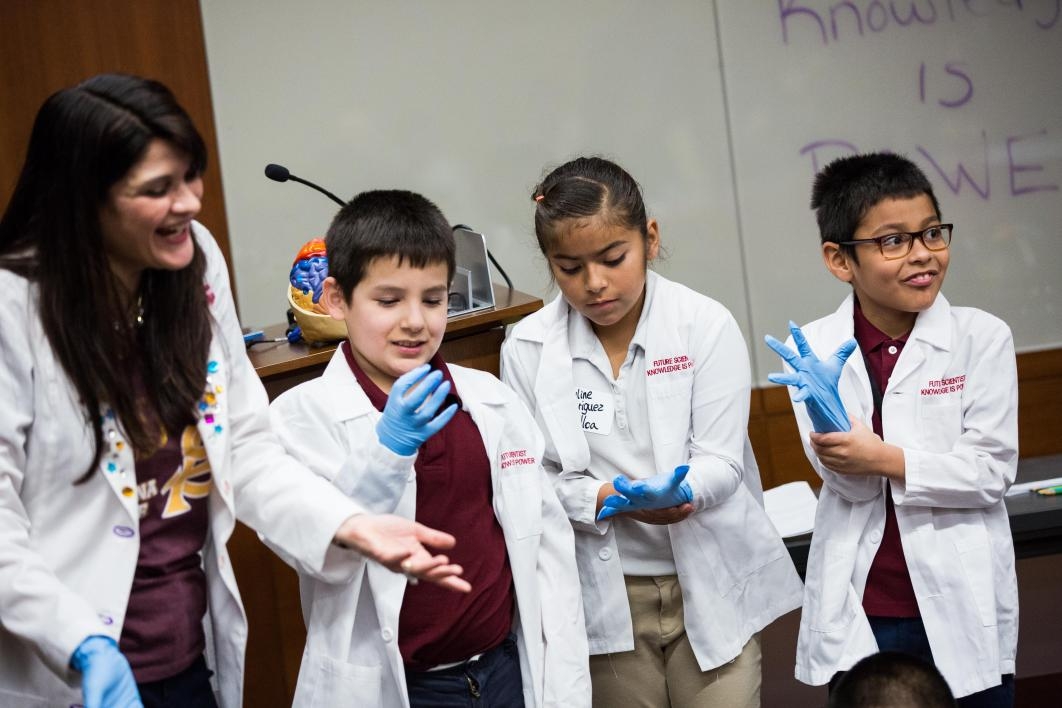 Psychology professor Heather Bimonte-Nelson puts lab coats and gloves on (from left to right) Fidel Zapien, Ayline Rodriguez and Armando Garcia at the start of the ASU Brain Fair for Children on Feb. 28. 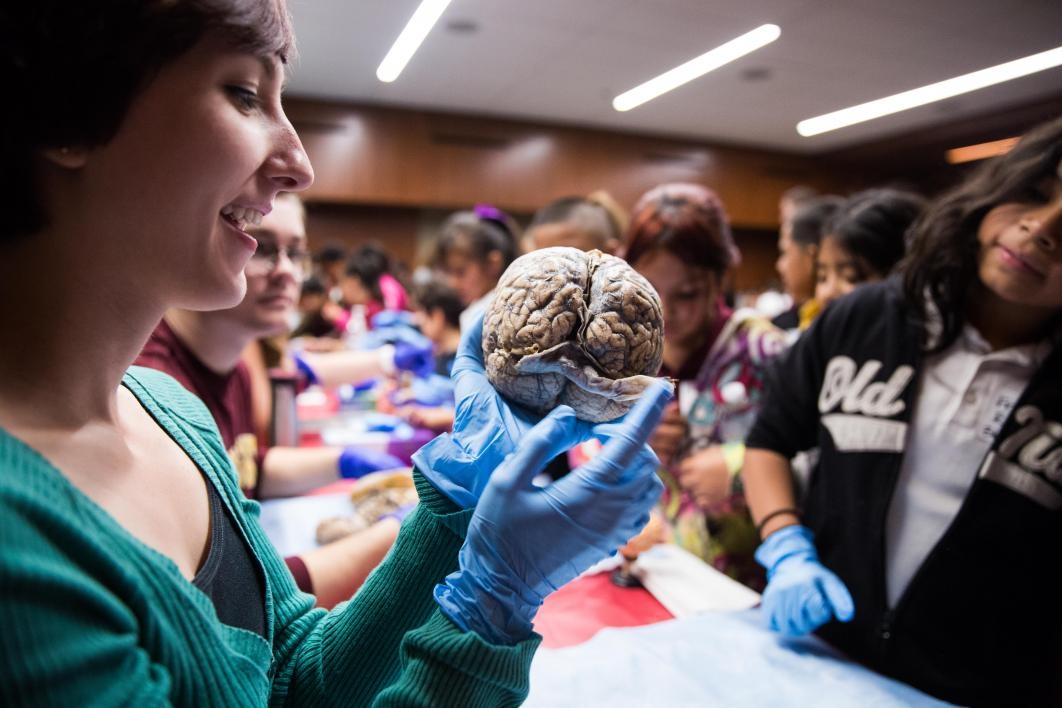 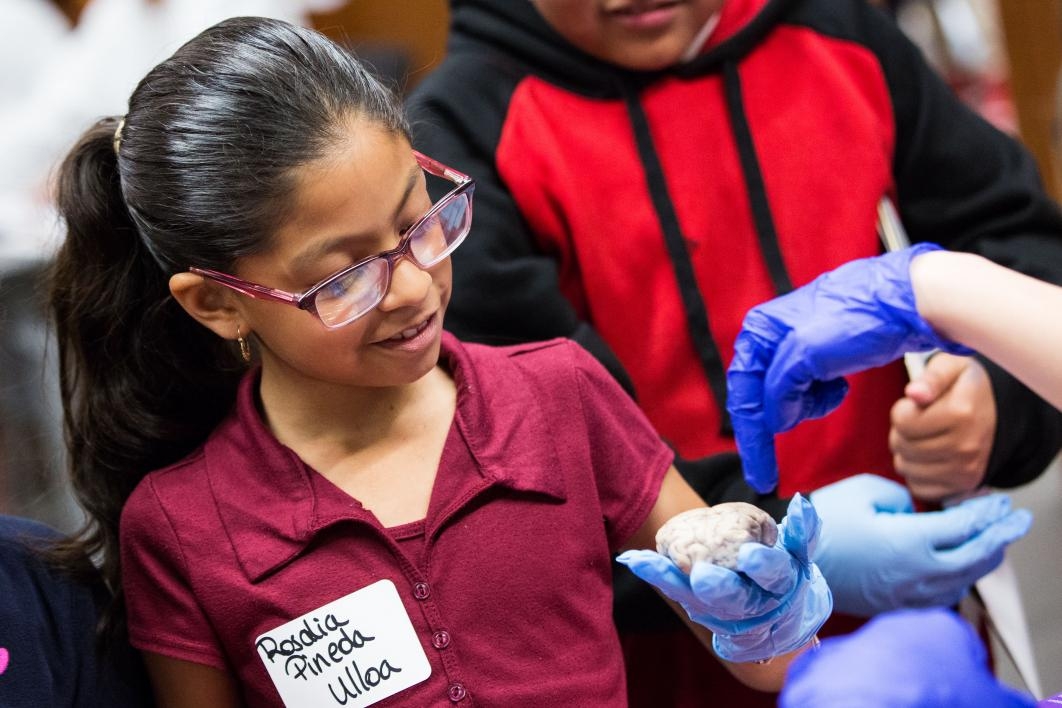 Rosalia Pineda holds a dog's brain in her hand and learns about the different lobes. 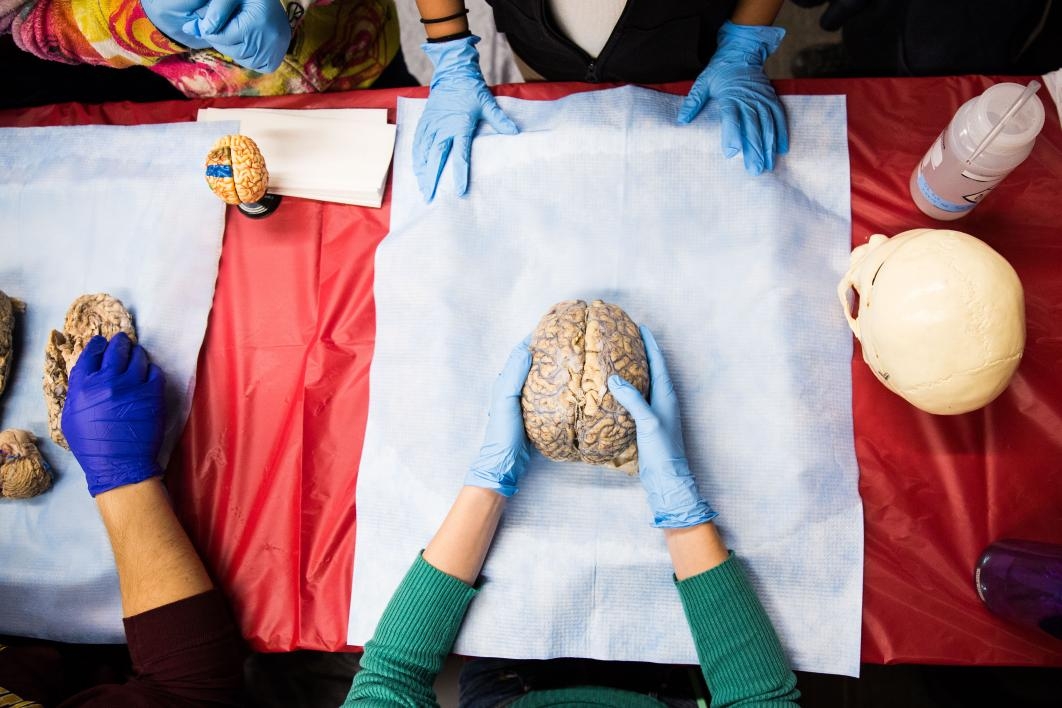 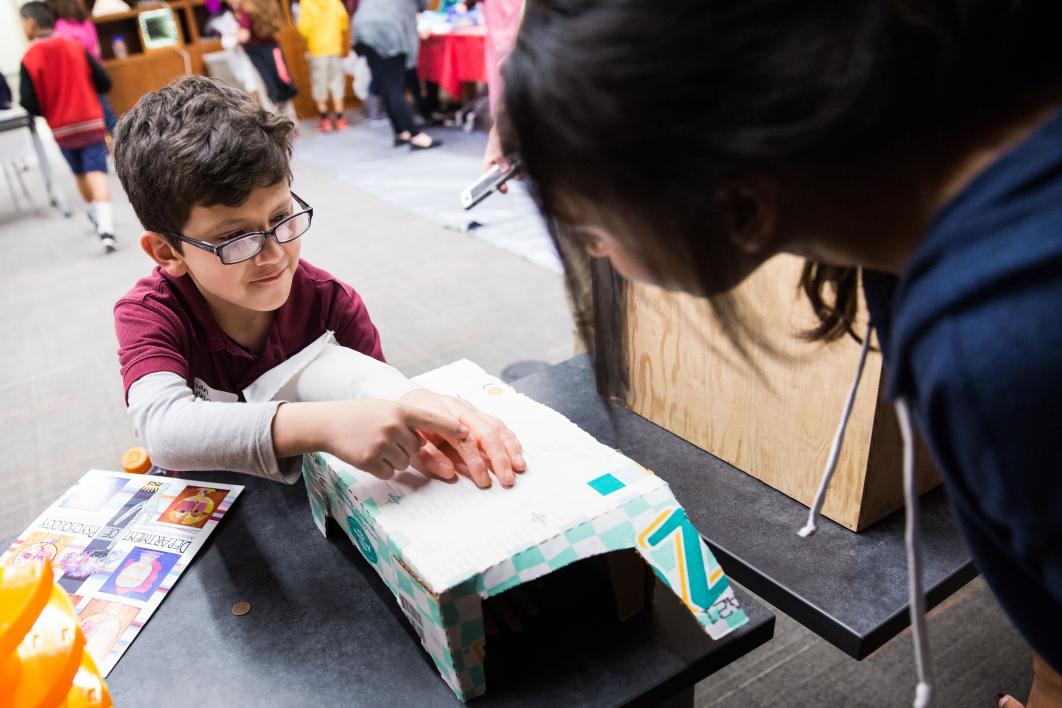 ASU alumna Shruti Patel shows Adrian Moreno an illusion created by the brain's perception of vision at Michael McBeth's table of illusions during the brain fair. The brain mistakes the fake hand for one's own hand inside the box and "feels" the touch on the finger. Jonathan Shayeb makes a face as he holds a sheep brain in his hand. 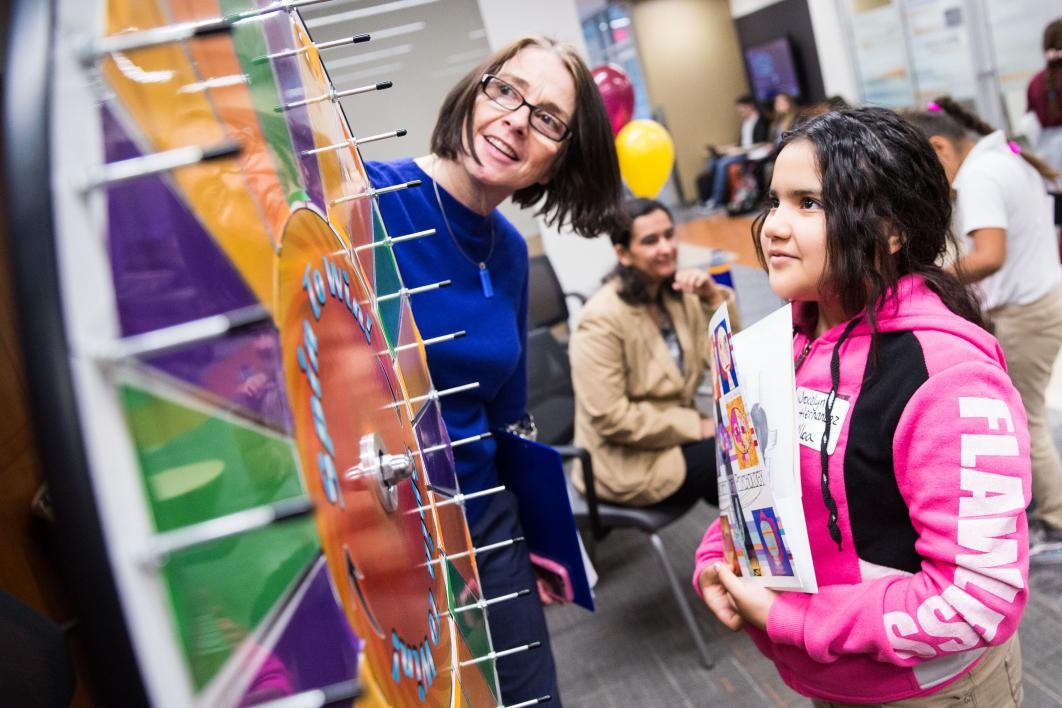 Jocelyn Hernandez takes her turn on the spinning wheel with cognitive science post-doctorate Kathleen Corley to see if she can correctly answer a question about the brain to win a reward.

“We really need to have an interdisciplinary approach from behavior to molecules,” she said. “I think that type of approach is what can help us understand and create innovative treatments for normal age-related memory decline and brain changes, as well as neurodegenerative disease.”

While the field of brain research is still expanding at ASU, community outreach efforts, thanks to the help of Bimonte-Nelson and some of her former students, are growing as well. Many of her graduates have gone on to organize Brain Fairs at their new positions throughout the country, hoping to drive some children toward the field of science in the process.

One of those former students, Liz Engler-Chiurazzi, is now at West Virginia University.

Engler-Chiurazzi is pursuing her post-doctoral fellowship in Morgantown, where she works on aging, Alzheimer’s and traumatic brain injuries, among other things. She loved the outreach initiatives started by Bimonte-Nelson so much that she started doing similar things at her new location.

“I started connecting with schools, brought supplies in and did those activities in the classrooms of the local school kids,” said Engler-Chiurazzi. “We will visit around 250 children in a slow year, but some years it’s up to 500 or 600.”

Because of the work from those like Engler-Chiurazzi and Bimonte-Nelson, interest in brain studies and neuroscience is growing in kids of all ages from all different places across the country.

For Bimonte-Nelson, that is what’s most significant.

“I think this is something we can really use to bring us together as a community,” she said. “By the time they leave, some of the kids will tell me that they want to be scientists. That makes me a little teary, and it’s why this is so important to me.”

Top photo: ASU psychology professor Heather Bimonte-Nelson walks children through the different lobes of the human brain and welcomes them to the ASU Brain Fair for Children on Feb. 28. The fair, which involved several ASU students and labs, was organized by Bimonte-Nelson to teach children about neuroscience. Photo by Deanna Dent/ASU Now

Arizona State University junior Bren Ram and freshman partner Ryan Ferdowsian, of ASU's forensics debate team, snagged the title of Pacific Champions this past weekend, in a policy debate competition held at the University of Southern California.Ram and Ferdowsian did not lose a single ballot (12 in all) en route to collecting the title in the Varsity division. Earlier in the week, Pacific region ...

Ram and Ferdowsian did not lose a single ballot (12 in all) en route to collecting the title in the Varsity division. Earlier in the week, Pacific region coaches selected Ram and Ferdowsian as representatives to this year's National Debate Tournament, where 78 teams will compete for the national policy championship March 24-27 at the University of Kansas. Ram also placed 4th in the individual speaker awards at the tournament. 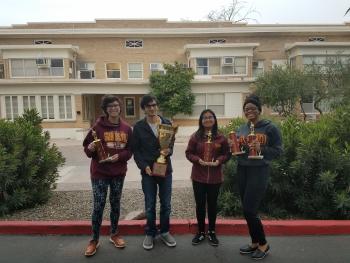 This is Figueroa's and Green's first year of competition in the event. The tournament represents a strong showing by both teams, as the team now prepares for nationals at the end of the season.

The forensics team is part of the Hugh Downs School of Human Communication.

By Adam Symonds, director of forensics