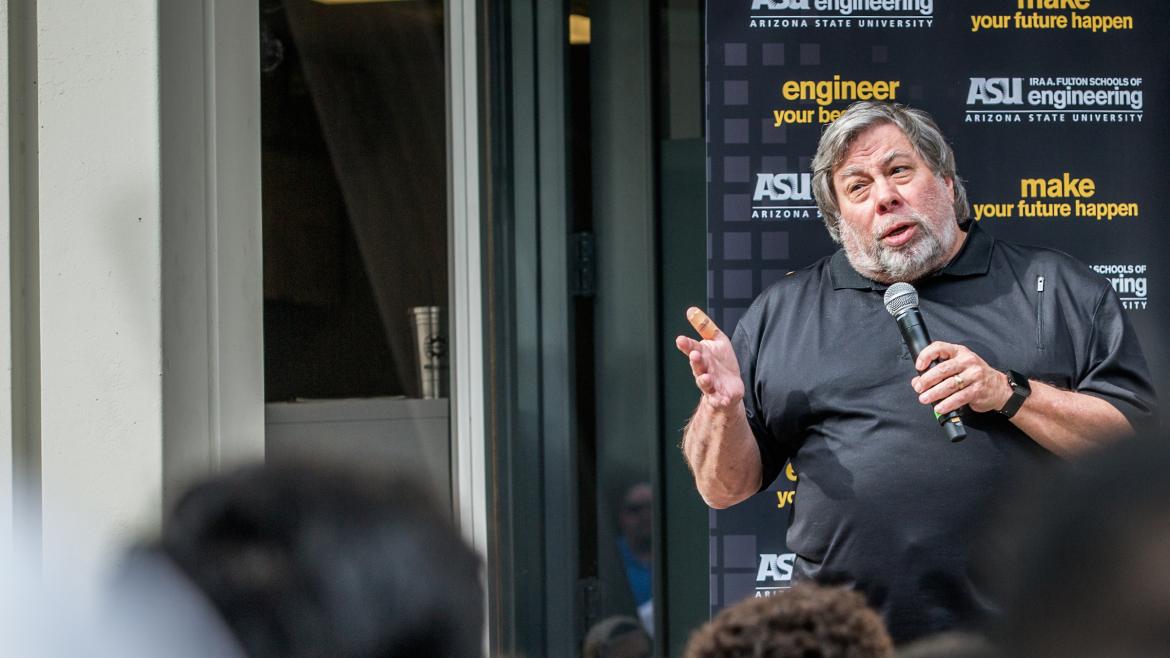 Tempe campus
Steve Wozniak says a product is good if it 'does good things for you.'
Apple co-founder comes to ASU in nod to National Entrepreneurship Week.
February 22, 2017

Steve Wozniak, the Thomas Edison of his time, told several hundred students at Arizona State University on Wednesday to create products they “desperately want” and that “motivation is more important than knowledge.”

The Apple co-founder and personal computer pioneer came to ASU as a nod to National Entrepreneur Week and gave an impromptu talk to about 400 students in a courtyard outside an engineering building on the Tempe campus.

“A man who truly needs no introductions,” Ira A. Fulton Schools of Engineering Dean Kyle Squires said before Wozniak’s remarks. “He single-handedly invented the personal computer.”

Students sat on the ground and up in trees to hear Wozniak discuss the secrets of success, happiness and learning for an hour and a half. His impact on their lives was evident: laptops bulging in backpacks.

“I stumbled into computers by accident,” Wozniak began. “I decided early in life I wanted to be an engineer. … In high school we didn’t have computers, but we had great teachers.” 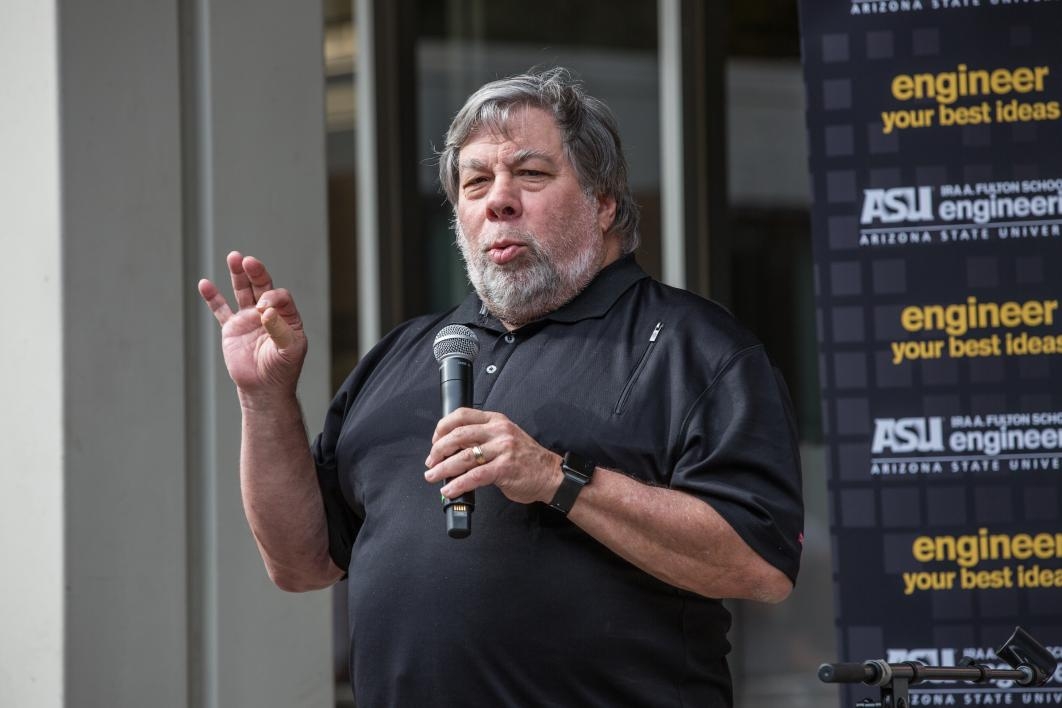 Apple co-founder Steve Wozniak was introduced by Ira A. Fulton Schools of Engineering Dean Kyle Squires on Wednesday as the man who "single-handedly invented the personal computer.” 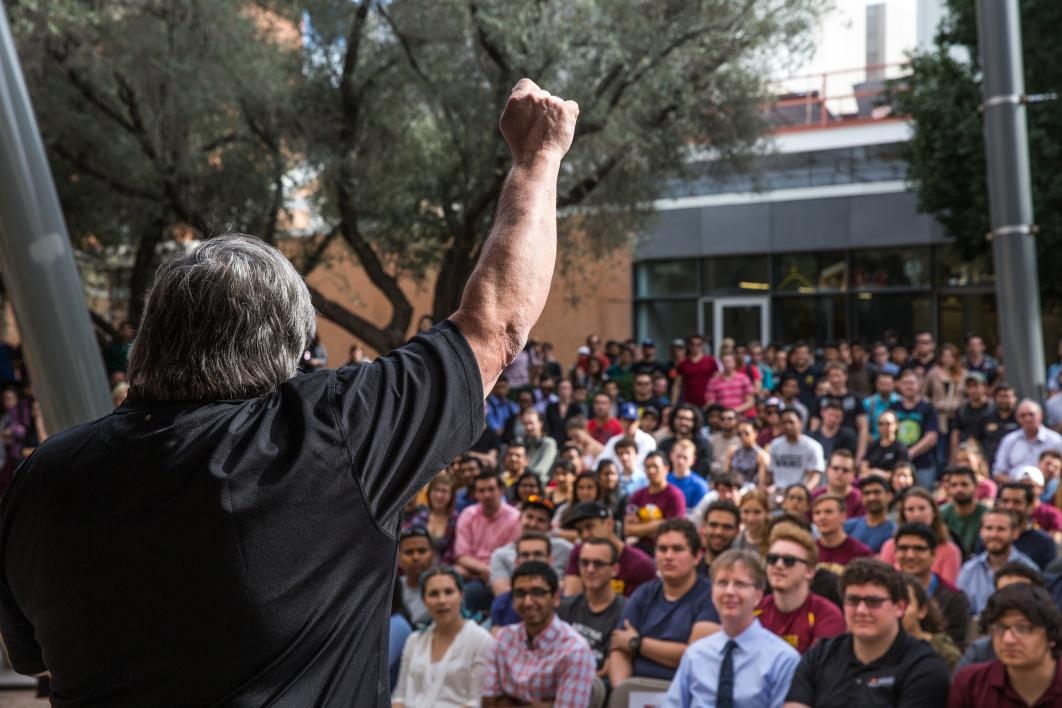 Several hundred students turned out to hear Steve Wozniak share his secrets for success, happiness and learning outside the ECG building on the Tempe campus. 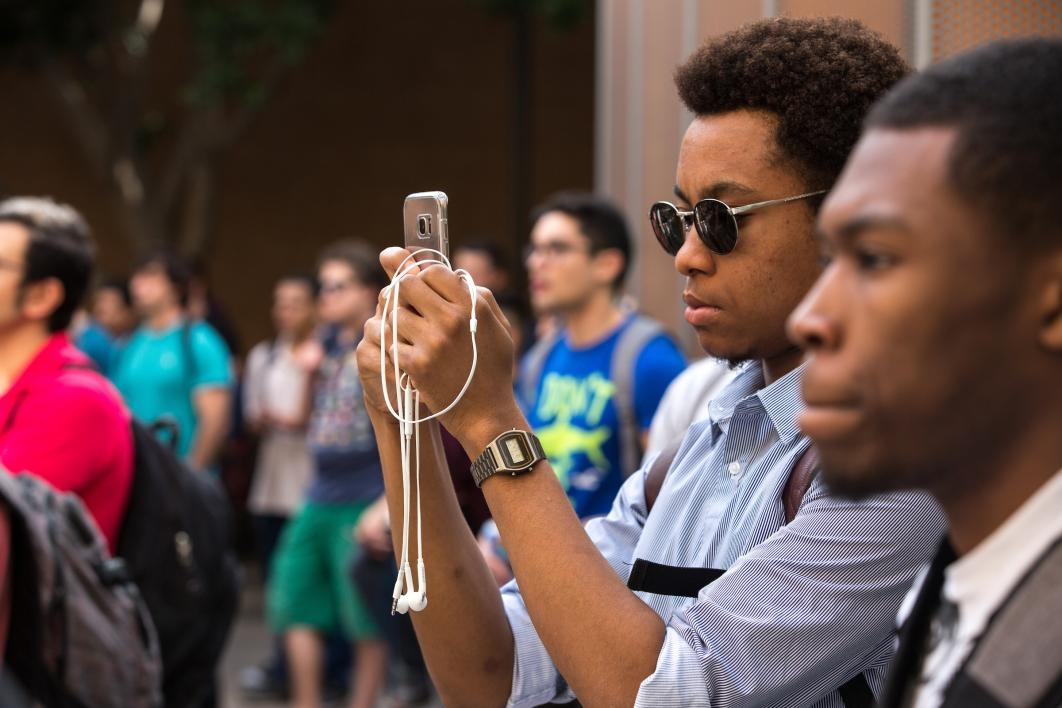 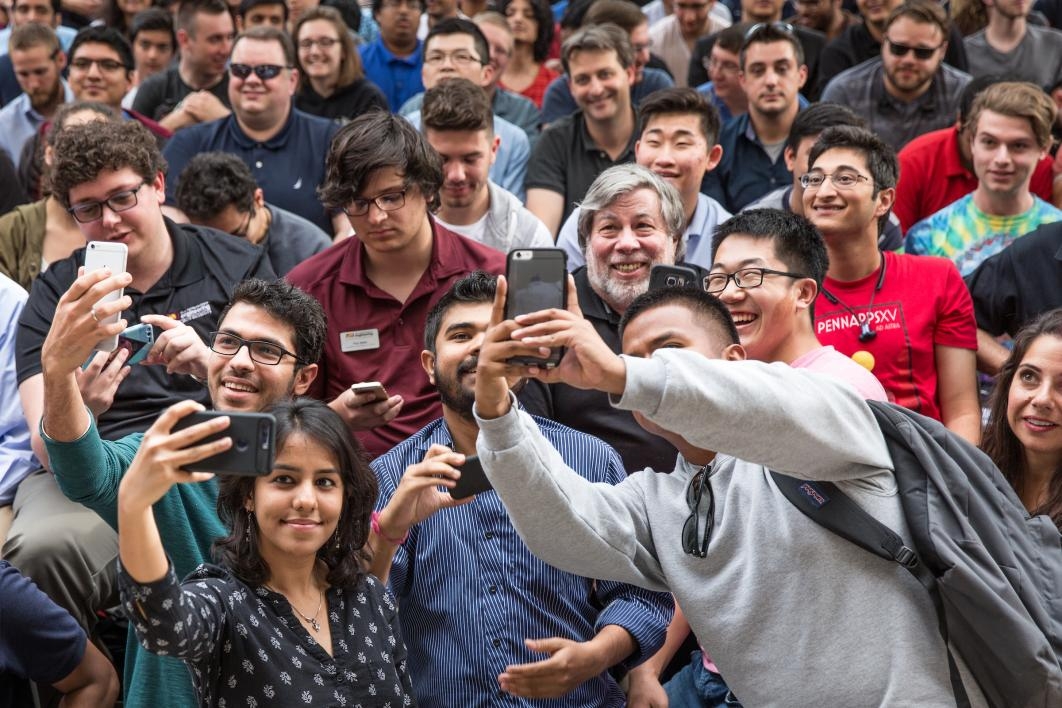 Dozens of ASU students pack in for the ultimate “ussie” with Steve Wozniak, who told them, “Motivation is more important than knowledge.”

When he was in high school, he raided libraries at Stanford University for everything he could find on computers. “The smartest people in the world don’t lock doors.”

Before Wozniak started Apple, he would come home at night from his job at Hewlett-Packard and do little projects that honed his design skills and critical thinking.

“Having fun in life is more important than being successful,” he said.

He bonded with Steve Jobs over music (Bob Dylan, specifically) and playing pranks on people.

“I was building projects, and he was selling them,” Wozniak said. “The trouble is, he couldn’t design.”

When Wozniak was an engineer at Hewlett-Packard, he pitched the idea of the personal computer. They turned it down.

“In the first 10 years of Apple, we failed at everything,” he said. “Motivation is more important than knowledge.”

What makes a great product? “Something is good because it does good things for you.”

If you build what you want, it will be successful, Wozniak said. He wanted a computer for himself, then created the Apple II. Steve Jobs wanted an iPhone, so he created it. Elon Musk wanted a big electric car, so he built the Tesla.

“(Musk) was doing it for his own use,” Wozniak said. “That’s when you get great products. … The best marketing of all is not ‘Will people like my idea?’ It’s ‘Do I desperately want it for myself?’ If you desperately want it for yourself, you’re going to have a lot better insight than market-research assumptions and guesses and all that stuff.”

"He said that we have to build what we really want and make it sell even if market research says otherwise,” the freshman technology entrepreneurship major said. “It changed my life."

Did serendipity play a part in his success? “Luck is the greatest superpower of all.”

Where has he directed his philanthropy? “Museums. Divorces. Lots of things.”

Addla Har called Wozniak’s visit the “best thing that ASU has done for us."

"I was really excited when I knew that he was coming and came an hour ahead to get front-row seating,” she said.

Rashmi Bhambhani, a grad student studying chemical engineering, said she was a fan of Wozniak’s innovation, technology and ideas.

The thing he said that resonated with her most was "the want to keep learning because as an engineer that's the one thing you'd look for as inspiration.”

Anya Magnuson contributed to this report.

Top photo: Apple co-founder and PC pioneer Steve Wozniak tells ASU students that the best marketing of all is not ‘Will people like my idea?’ It’s ‘Do I desperately want it for myself?’ Photo by Anya Magnuson/ASU Now

National Entrepreneurship Week and Phoenix Startup Week both kicked off Monday.At ASU, entrepreneurship is a core value. The university’s Entrepreneurship + Innovation team is ready to work with faculty, staff, students and community members with mentorship opportunities, seed funding, office space, training and opportunities for collaboration at all stages from ideation to ready for market.Ji M...

At ASU, entrepreneurship is a core value. The university’s Entrepreneurship + Innovation team is ready to work with faculty, staff, students and community members with mentorship opportunities, seed funding, office space, training and opportunities for collaboration at all stages from ideation to ready for market. Question: What is an entrepreneurial mind-set, and how does ASU help foster that mind-set?

Answer: At ASU, our goal is to be of service to students, faculty and our community. We aim to nurture an entrepreneurial mind-set, which means supporting the growth of curiosity, helping people build connections, and working to create value from ideas. ASU provides a wealth of opportunities to learn about entrepreneurship and innovation geared toward nearly any interest, idea or audience.

Q: If a faculty or staff member, student or member of the community has an idea, what ASU resources are available to them?

A: A broad outline of programs and services can be found on our website at https://entrepreneurship.asu.edu/. In addition, ASU offers a number of undergraduate and graduate entrepreneurial degree programs. A few examples of resources and programs include:

ASU Venture Devils, which supports student entrepreneurs who are launching ventures in a range of developmental stages.

The ASU Mentor Network is available to anyone at ASU or in the community with an idea interested in learning more about finance, marketing, legal operations and scaling, business development and sales, manufacturing and more.

We also offer programs like Prepped, for early-stage and emerging food businesses, and SparXX, for women beginning to explore entrepreneurship and business ownership.

Additional information about our various funding opportunities, programs and technology commercialization resources can be found online.

Q: Are regional resources available for entrepreneurs who live outside of Tempe?

A: Absolutely. Finding the right space to build ideas and get creative is important to aspiring entrepreneurs. Some of our spaces include the ASU Chandler Innovation Center, 1951@SkySong in Scottsdale, Changemaker Central, the Inno-NATIONS tribal business collision community, and mkrservices at Hayden Library in Tempe.

ASU Startup School, a self-paced online course, is another resource available for anyone interested in learning more about how to develop a successful venture.