Gemneo Bioscience, the 100th company to spin out from the ideas of ASU faculty and staff, will provide physicians with more optimal cancer treatments and immunotherapies to help improve cancer outcomes.

Currently, cancer patients often undergo a variety of regimens, that can all-too-often fail and further compromise the immune system, as physicians try to identify which treatments will work. The trial-and-error approach can increase painful side effects and take valuable time, which for cancer, can cost lives. 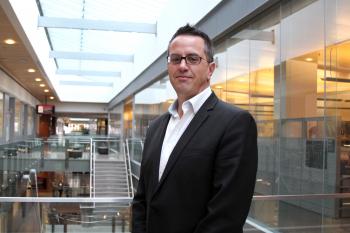 Joseph Blattman, a researcher in ASU’s Biodesign Institute who is leading the spinout effort, worked with Professor Hao Yan to create the new immune cell profiling technology that identifies each patient’s unique tumor signature. The technology also identifies rogue cells that current technologies have not been able to detect. Additionally, it suggests key immune elements to exploit during immunotherapy.

“With cancer, the more diverse the cancer cells, the more difficult it is to identify the most effective treatment,” Blattman said. “Our technology will give physicians a more precise tool for more effectively treating cancer — and a host of other diseases.”

Blattman is a researcher in the Biodesign Institute’s Center for Immunotherapy, Vaccines and Virotherapy and is program director of the ASU School of Life Sciences microbiology graduate program.

“Our technology overcomes a major limitation of current deep-sequencing approaches, which struggle to identify particular combinations of immune receptors or cancer mutations,” Blattman said. “Gemneo allows us to interrogate individual cells to identify T-cell receptors and antibody sequences for diagnostics or therapeutic approaches, as well as rare combinations of cancer mutations occurring at the single cell level. In the future, this will facilitate personalized therapeutic approaches and better outcomes for cancer treatment.”

“The Gemneo team is honored to be the 100th spinout company formed based on ASU’s extensive wide-ranging research efforts,” Shrikhande said. “This milestone is a testament to ASU’s longstanding commitment to excellence in research coupled with the unique innovation and entrepreneurial ecosystem that ASU has established to seed and nurture the creation of faculty and student ventures.”

ASU inventions have attracted hundreds of millions of dollars in external funding, including $96 million in FY16. Additionally, more than 500 people are now employed at ASU-linked startups. Overall, ASU has inspired or assisted in the formation or growth of an estimated 1,000 startups.

ASU’s venture development is led by Arizona Technology Enterprises (AzTE), which was formed in 2003 to serve as the university’s exclusive intellectual property management and technology transfer organization.

“University technology transfer has the power to grow the economy, create jobs and move life-changing innovations out of ASU’s research labs and into actual use,” said Augie Cheng, AzTE’s CEO and chief legal officer. “However, it takes more than signing a licensing agreement and wishing the new company luck. That’s why AzTE and its ASU partners have launched initiatives like the Startup Mill and the ASU California Center in Santa Monica to provide those missing pieces: the right training, the right partners, the right investors and the right business leaders.”

Since its formation, AzTE has developed into one of the nation’s top-performing technology transfer offices, across a range of industry metrics. In FY16, ASU faculty working with AzTE submitted 269 invention disclosures, initiated 13 startup companies and were issued 60 U.S. patents. Since 2003, AzTE has received more than 2,500 invention disclosures from ASU researchers and executed nearly 800 licenses and options.

An Arizona State University faculty member has taken on a recently created leadership position within the National Academy of Engineering.Emeritus professor B.L. Ramakrishna was named director of the Academy’s Grand Challenges Scholars Program Network.Proctor Reid, NAE’s director of programs, said this position was designed to “facilitate the development and expansion” of the Grand Challe...

An Arizona State University faculty member has taken on a recently created leadership position within the National Academy of Engineering. 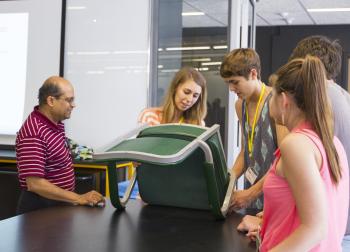 B.L. Ramakrishna (left) served as director of the Grand Challenge Scholars Program at ASU from 2009 to 2013. Now, he's overseeing the program on a national level. Photo by: Jessica Hochreiter/ASU Download Full Image

Proctor Reid, NAE’s director of programs, said this position was designed to “facilitate the development and expansion” of the Grand Challenge Scholars Program, which he describes as a “powerful educational movement.”

The undergraduate education program was established in 2009 with a focus on preparing students to contribute to solving some of the biggest challenges of the 21st century.

The program is now active in 38 universities across the United States, and in four universities abroad. As director, Ramakrishna will focus on the continued growth of the Grand Challenge Scholars Program, as well as improving the programs nationwide through data collection, research, community building efforts, outreach and partner development.

Ramakrishna brought the program to ASU’s Ira A. Fulton Schools of Engineering in 2009. Serving as the director until 2013, he established the program as the Fulton Schools’ Scholar Academy, a unique, application-based program for highly qualified engineering students.

In 2013, the Fulton Schools’ program produced its first graduate from among 60 students and has since grown to 480 students, 31 percent of which are female.

Ramakrishna was driven to support and expand the program because it reflected his commitment to creating future engineers who have an interdisciplinary education, an entrepreneurial mindset, a global perspective and a deep sense of social consciousness.

He said ASU’s program offered a pivotal insight into the growth potential of the program on a national level. Prior to founding the program at ASU, Grand Challenge Scholar Programs were in place at only a handful of private universities.

“When we established a successful program at a university like ASU, it proved that this program can be grown across public and private universities — both large and small,” Ramakrishna said.

In 2013, Ramakrishna stepped down as director to accept a prestigious Jefferson Science Fellowship, which brought together a team of four doctors, four scientists and four engineers to advise the U.S. State Department in foreign relations through the lens of science, engineering and health.

“This experience really helped me to understand the big picture impacts of a program like this,” Ramakrishna said.

“I saw how science and technology and innovation can come together to transform global development and inform foreign policy,” he said.

In his role in the Jefferson Science Fellowship, Ramakrishna traveled to several countries, including Tanzania, Ghana, Armenia and India. He made connections on his diplomatic visits that should help him advance the National Academy of Engineering’s goal to scale the Grand Challenge Scholars Program globally.

Prior to this fellowship, Ramakrishna was a faculty member at ASU for more than 30 years.

After seven years of organic growth, Ramakrishna has a five-year goal to swiftly expand the program to 150 universities across the United States, and to 75 universities abroad.

Throughout the growth process he will continue to champion the locally-driven nature of the program.

“We leave the implementation of the program to the specific institution and encourage individual approaches to suit each university and their community,” he said.

The National Academy of Engineering supports this program because it “promotes what engineering is really all about,” Ramakrishna said.

“The program captures the vision that engineering is a mechanism for creating solutions to problems our people and planet face and as a result makes the world more sustainable, healthy, secure and joyful,” he said.

Ramakrishna said playing a role in communicating that vision to students across the country and around the world is what really excites him.

In addition to capturing the hearts and minds of young engineers, Ramakrishna’s aims to increase support for this program’s movement across industry, universities, governments, NGOs and professional engineering societies.

Currently, the program primarily depends on mentors in academia, but Ramakrishna has a vision that includes attracting more professional engineers to the effort.

“I believe engineering professionals recognize there’s a demand for the type of engineers that this program produces in their companies,” Ramakrishna said.

“Industry demands engineers that have technical depth, but also interdisciplinary breadth. Companies want employees who know how to think economically, ethically, culturally and globally,” he said.

“For the National Academy of Engineering, the Grand Challenge Scholars Program is really more of a movement than a project,” he said.

And he expects the vision of the program to continue to grow and transform the world, saying, “I’m not afraid to think big and really long-term. Even into how this program will grow to someday propel engineers to meet the challenges of not only the 21st century, but into the 22nd century and beyond.”