Some pairs are better together than their individual counterparts: peanut butter and chocolate, warm weather and ice cream, and now, in the realm of photovoltaic technology, silicon and perovskite.

As existing solar-energy technologies near their theoretical efficiency limits, researchers are exploring new methods to improve performance — such as stacking two photovoltaic materials in a tandem cell. Collaboration between researchers at Arizona State University and Stanford University has birthed such a cell with record-breaking conversion efficiency — effectively finding the peanut butter to silicon’s chocolate.

The results of their work, published Feb. 17 in Nature Energy, outline the use of perovskite and silicon to create a tandem solar cell capable of converting sunlight to energy with an efficiency of 23.6 percent, just shy of the all-time silicon efficiency record.

“The best silicon solar cell alone has achieved 26.3 percent efficiency,” said Zachary Holman, an assistant professor of electrical engineering at the Ira A. Fulton Schools of Engineering. “Now we’re gunning for 30 percent with these tandem cells, and I think we could be there within two years.”

Silicon solar cells are the backbone of a $30 billion-a-year industry, and this breakthrough shows that there’s room for significant improvement within such devices by finding partner materials to boost efficiency.

The high-performance tandem cell’s layers are each specially tuned to capture different wavelengths of light. The top layer, composed of a perovskite compound, was designed to excel at absorbing visible light. The cell’s silicon base is tuned to capture infrared light.

Perovskite, a cheap, easily manufacturable photovoltaic material, has emerged as a challenger to silicon’s dominance in the solar market. Since its introduction to solar technology in 2009, the efficiency of perovskite solar cells has increased from 3.8 percent to 22.1 percent in early 2016, according to the National Renewable Energy Laboratory.

The perovskite used in the tandem cell came courtesy of Stanford researchers — professor Michael McGehee and doctoral student Kevin Bush, who fabricated the compound and tested the materials.

The research team at ASU provided the silicon base and modeling to determine other material candidates for use in the tandem cell’s supporting layers.

Though low-cost and highly efficient, perovskites have been limited by poor stability, degrading at a much faster rate than silicon in hot and humid environments. Additionally, perovskite solar cells have suffered from parasitic absorption, in which light is absorbed by supporting layers in the cell that don’t generate electricity.

“We have improved the stability of the perovskite solar cells in two ways,” said McGehee, a materials science and engineering professor at Stanford’s College of Engineering. “First, we replaced an organic cation with cesium. Second, we protected the perovskite with an impermeable indium tin oxide layer that also functions as an electrode.”

“In many solar cells, we put a layer on top that is both transparent and conductive,” said Holman, a faculty member in the School of Electrical, Computer and Energy Engineering. “It's transparent so light can go through and conductive so we can take electrical charges off it.”

This top conductive layer is applied using a process called sputtering deposition, which historically has led to damaged perovskite cells. However, McGehee was able to apply a tin oxide layer with help from chemical engineering professor Stacey Bent and doctoral student Axel Palmstrom of Stanford. The pair developed a thin layer that protects the delicate perovskite from the deposition of the final conductive layer without contributing to parasitic absorption, further boosting the cell’s efficiency.

The deposition of the final conductive layer wasn’t the only engineering challenge posed by integrating perovskites and silicon. 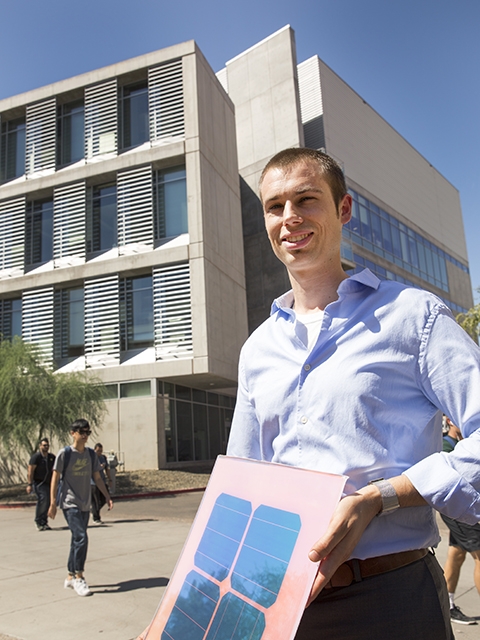 Assistant professor of electrical engineering Zachary Holman holds one of the many solar cells his research group has created. 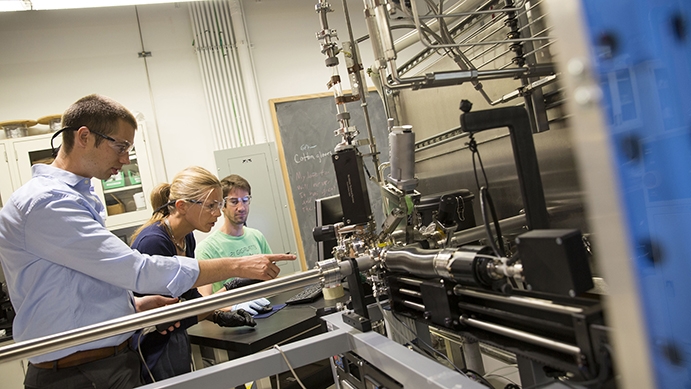 Zachary Holman, an assistant professor of electrical engineering, works in his lab. “We’ve tried to position our research group as the go-to group in the U.S. for silicon bottom cells for tandems,” said Holman, who has been pursuing additional avenues aside from the perovskite/silicon cell to create high-efficiency tandem solar cells.

Electrical engineering doctoral student Zhengshan (Jason) Yu works with the perovskite/silicon tandem solar cells in Holman's lab. Yu has been interested in photovoltaics since his undergraduate years. He worked with a solar energy startup right out of school before going on to pursue his doctoral degree at ASU.

“It was difficult to apply the perovskite itself without compromising the performance of the silicon cell,” said Zhengshan (Jason) Yu, an electrical engineering doctoral student at ASU.

Silicon wafers are placed in a potassium hydroxide solution during fabrication, which creates a rough, jagged surface. This texture, ideal for trapping light and generating more energy, works well for silicon, but perovskite prefers a smooth — and unfortunately reflective — surface for deposition.

Additionally, the perovskite layer of the tandem cell is less than a micron thick, opposed to the 250-micron-thick silicon layer. This means when the thin perovskite layer was deposited, it was applied unevenly, pooling in the rough silicon’s low points and failing to adhere to its peaks.

Yu developed a method to create a planar surface only on the front of the silicon solar cell using a removable, protective layer. This resulted in a smooth surface on one side of the cell, ideal for applying the perovskite, while leaving the backside rough, to trap the weakly absorbed near-infrared light in the silicon.

“With the incorporation of a silicon nanoparticle rear reflector, this infrared-tuned silicon cell becomes an excellent bottom cell for tandems," said Yu.

The success of the tandem cell is built on existing achievements from both teams of researchers. In October 2016, McGehee and post-doctoral scholar Tomas Leijtens fabricated an all-perovskite cell capable of 20.3 percent efficiency. The high-performance cell was achieved in part by creating a perovskite with record stability, marking McGehee’s group as one of the first teams to devote research efforts to fabricating stable perovskite compounds.

“We’ve tried to position our research group as the go-to group in the U.S. for silicon bottom cells for tandems,” said Holman, who has been pursuing additional avenues to create high-efficiency tandem solar cells.

In fact, Holman and Yu published a comment in Nature Energy in September 2016 outlining the projected efficiencies of different cell combinations in tandems.

“People often ask, ‘Given the fundamental laws of physics, what’s the best you can do?’” said Holman. “We’ve asked and answered a different, more useful question: Given two existing materials, if you could put them together, ideally, what would you get?”’

The publication is a sensible guide to designing a tandem solar cell, specifically with silicon as the bottom solar cell, according to Holman.

It calculates what the maximum efficiency would be if you could pair two existing solar cells in a tandem without any performance loss. The guide has proven useful in directing research efforts to pursue the best partner materials for silicon.

“We have eight projects with different universities and organizations, looking at different types of top cells that go on top of silicon,” said Holman. “So far out of all our projects, our perovskite/silicon tandem cell with Stanford is the leader.”

KEDtalk: Visitors from another world

Gazing at the night sky conjures deep questions about the universe. Meenakshi Wadhwa, professor at the School of Earth and Space Exploration and director of the Center for Meteorite Studies at Arizona State University, invites us to look at the planetary "Rosetta stones" right here on Earth that can give us answers.Growing up near the foothills of the Himalayas in India, Wadhwa dreamed of becomi... 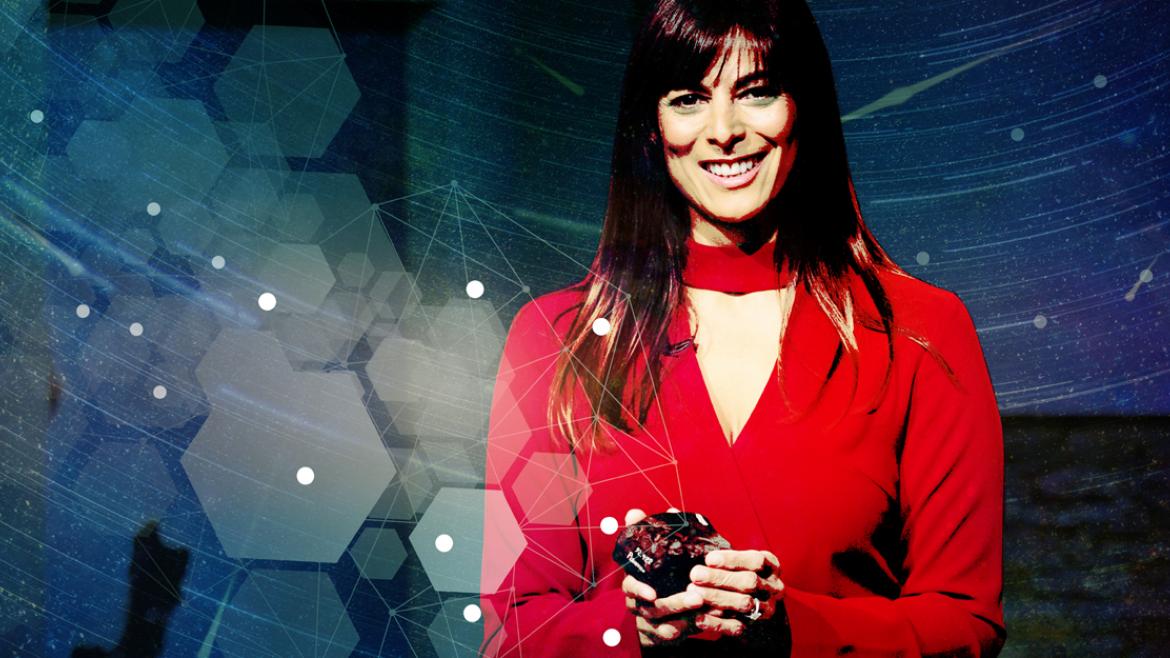 KEDtalk: Visitors from another world

Meenakshi Wadhwa, director of Center for Meteorite Studies at ASU, discusses origins of universe and studying Mars through rocks

Gazing at the night sky conjures deep questions about the universe. Meenakshi Wadhwa, professor at the School of Earth and Space Exploration and director of the Center for Meteorite Studies at Arizona State University, invites us to look at the planetary "Rosetta stones" right here on Earth that can give us answers.

Growing up near the foothills of the Himalayas in India, Wadhwa dreamed of becoming a geologist. But as she kept asking bigger and better questions, first as a bachelor’s student in India and then a graduate student in the U.S., it became clear: She didn’t just want to be a geologist; she wanted to become a space geologist, studying meteorites to uncover the mystery of the origins of the Earth.

In her KEDtalk, Wadhwa takes us on her journey of uncovering her purpose, starting as a curious 8-year-old worried about the Earth running out of oxygen to measuring the age of the solar system to near accuracy.

Wadhwa's talk is part of the ASU KEDtalks series. Short for Knowledge Enterprise Development talks, KEDtalks aim to spark ideas, indulge curiosity, and inspire action by highlighting ASU scientists, humanists, social scientists and artists who are driven to find solutions to the universe’s grandest challenges. Tune in monthly to research.asu.edu/kedtalks to discover how the next educational revolution will come about, whether space is the next economic frontier and more.