This specialized committee will organize and oversee National Research Council studies that provide independent advice to society and to government at all levels on geospatial science, technology and policy, according to the National Academy of Sciences. 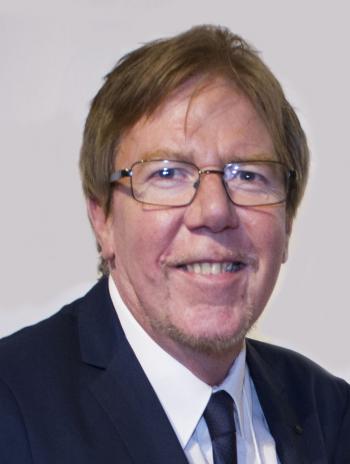 A leading expert in the utilization of spatial data, Fotheringham’s research covers a variety of areas from health geography to transportation to migration analysis — information that will prove beneficial to the committee’s work.

“Maps have always provided incredibly efficient means of communicating knowledge about our environment,” said Fotheringham. “This has become even more evident in the current era where we now have the ability to measure and track our locations through our cellphones, cameras and in-vehicle GPS receivers. This did not happen 30 years ago, so this is a really exciting time to be involved in mapping science.”

The work being completed by Fotheringham and the committee, composed of nine experts from across the nation, will not only impact work being done here on land but also in space. The committee is slated to tackle the task of integrating GPS satellites for the United States with those of the European Space Agency’s Galileo system and China’s BeiDou satellites, improving our ability to accurately and continuously record locations and interact with our environment.

Fotheringham was elected to the National Academy of Science in 2013 and joined ASU as professor and distinguished scientist in 2014.

Arizona State University’s Biodesign Center for Applied Structural Discovery (BCASD) and an international team of scientists have used high-intensity X-ray pulses to determine the structure of the crystalline protein envelope of an insect virus. Their analysis reveals the fine details of the building blocks that make up the viral cocoon down to a scale of 0.2 nanometers (millionths of a millimet...

Arizona State University’s Biodesign Center for Applied Structural Discovery (BCASD) and an international team of scientists have used high-intensity X-ray pulses to determine the structure of the crystalline protein envelope of an insect virus. Their analysis reveals the fine details of the building blocks that make up the viral cocoon down to a scale of 0.2 nanometers (millionths of a millimeter) — approaching atom-scale resolution.

The tiny viruses with their crystal casing are by far the smallest protein crystals ever analyzed using X-ray crystallography. This opens up new opportunities in the study of protein structures, as the team headed by DESY’s Leading Scientist Henry Chapman from the Center for Free-Electron Laser Science reports in the Proceedings of the National Academy of Sciences (PNAS). 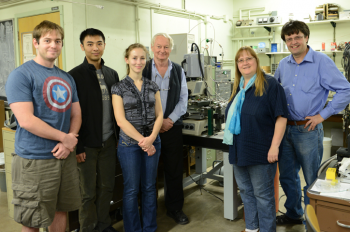 “The granulovirus attacks certain insects and kills them. This initially leaves it stranded inside the decaying host, so it has to protect itself, perhaps for years, against adverse environmental conditions such as heat, ultraviolet radiation and drought, until it is once again ingested by an insect. To achieve this, the virus wraps itself in a cocoon made of protein crystals, which only dissolve again once it reaches an insect’s gut,” explained Cornelius Gati from DESY, the lead author of the paper.

The researchers examined the cocoon of the Cydia pomonella granulovirus (CpGV), which infects the caterpillars of the codling moth (Cydia pomonella) and is used in agriculture as a biological pesticide. The virus is harmless to humans.

“So many important biological processes, like how we get sick or how plants capture sunlight, have been very difficult to study at the molecular level,” said Fromme. “This is a beautiful example of nature providing a clue to help scientist build better and smaller nanocrystals that will ultimately help us solve relevant and important problems in our world.”

In 2011, Fromme, along with ASU professor of physics John Spence and their collaborators, pioneered a method known as serial femtosecond crystallography. The technique is used to examine thousands of nanocrystals, using X-ray pulses at the femtosecond scale, (a millionth of a billionth of a second). Although the nanocrystals are vaporized by the X-ray pulse, the time frame is so short that a diffraction image is obtained before sample destruction occurs.

“With the success of this new study, we have made a major stride toward the goal of analyzing individual molecules,” said Spence, who also participated in the new work, along with fellow ASU researchers Nadia A. Zatsepin, Uwe Weierstall, R. Bruce Doak, Raimund Fromme, Ingo Grotjohann, Shibom Basu, Daniel James, Christopher  Kupitz, Kimberly  Rendek and Dingjie Wang.

Scientists are interested in the spatial structure of proteins and other biomolecules because this sheds light on the precise way in which they work. This has led to a specialized science known as structural biology.

“Over the past 50 years, scientists have determined the structures of more than 100,000 proteins,” said Chapman, who is also a professor of physics at the University of Hamburg. “By far the most important tool for this is X-ray crystallography.”

One challenge, however, has been producing nanocrystals appropriate for this research. Many proteins do not readily align to formcrystals, because that is not their natural state. The smaller the crystals that can be used for the analysis, the easier it is to grow them, but the harder it is to measure them.

“We are hoping that in the future we will be able to dispense altogether with growing crystals and study individual molecules directly using X-rays,” said Chapman, “so we would like to understand the limits.” 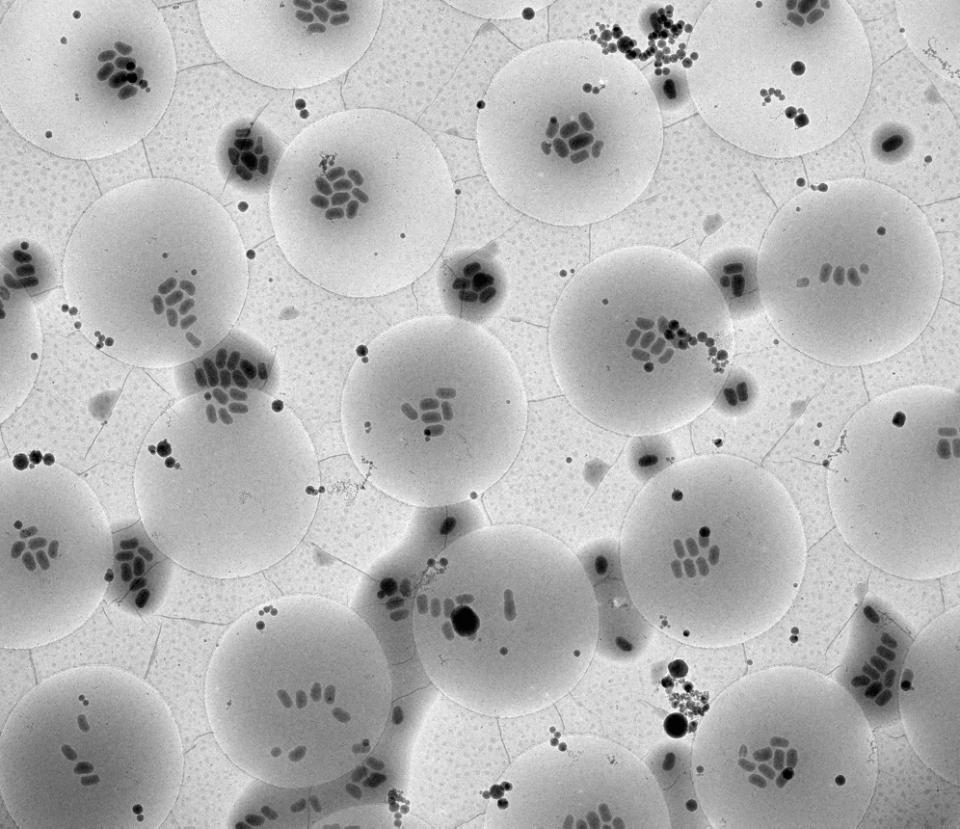 The virus particles used in the new study provided the smallest protein crystals ever used for X-ray structure analysis. The occlusion body (the virus “cocoon”) has a volume of around 0.01 cubic micrometers, about 100 times smaller than the smallest artificially grown protein crystals that have until now been analyzed using crystallographic techniques.

To break this limit in crystal size, an extremely bright X-ray beam was needed, which was obtained using an XFEL, in which a beam of high-speed electrons is guided through a magnetic undulator causing them to emit laser-like X-ray pulses.

The scientists used the free-electron laser Linac Coherent Light Source (LCLS) at the SLAC National Accelerator Laboratory in the U.S., and employed optics to focus each X-ray pulse to a similar size as one of the virus particles. Directing the entire power of the FEL onto one tiny virus exposed it to the tremendous radiation levels, equivalent to 1.3 billion Grays. (For comparison: The lethal dose for humans is around 50 Grays.) 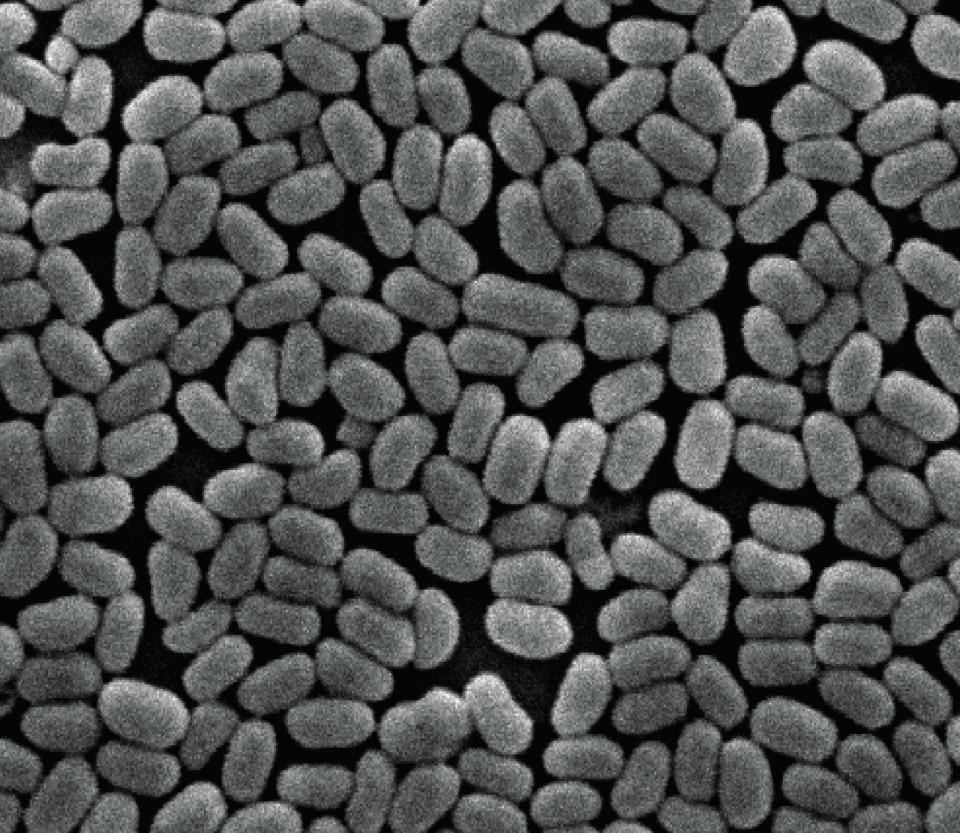 Scanning electron microscope image showing the homogeneous size of the virus particles. Field of View is about 5 microns. Credit: Peter Metcalf/University of Auckland

The FEL dose was certainly lethal for the viruses too — each was completely vaporized by a single X-ray pulse.  But the femtosecond-duration pulse carries the information of the pristine structure to the detector and the destruction of the virus occurs only after the passage of the pulse. The analysis of the recorded diffraction showed that even tiny protein crystals that are bombarded with extremely high radiation doses can still reveal their structure on an atomic scale.

“Simulations based on our measurements suggest that our method can probably be used to determine the structure of even smaller crystals consisting of only hundreds or thousands of molecules,” reported Chapman, who is also a member of the Hamburg Center for Ultrafast Imaging (CUI).