Big cities with lots of people usually garner images of a fast-paced life, where the hustle and bustle of the city is met, and at least tolerated, by those who live there. They live for the “rush” of city life, and all of the competition that lies therein.

But a new study by Arizona State University shows the opposite may be true — that one psychological effect of population density is for those people to adopt a “slow life strategy.” This strategy focuses more on planning for the long-term future and includes tactics like preferring long-term romantic relationships, having fewer children and investing more in education.

The study, “The crowded life is a slow life: Population density and life history strategy,” was published in the Journal of Personality and Social Psychology. Its findings provide novel insights into how population density affects human psychology, and it has implications for thinking about population growth, environmental influences on social behavior, and human cultural diversity.

“Our findings are contrary to the notion that crowded places are chaotic and socially problematic,” said Oliver Sng, who led the research while a doctoral student at ASU and who now is a postdoctoral fellow at the University of Michigan. “People who live in dense places seem to plan for the future more, prefer long-term romantic relationships, get married later in life, have fewer children and invest a lot in each child. They generally adopt an approach to life that values quality over quantity.”

Sng, with ASU Foundation Professor Steven Neuberg and ASU psychology professors Douglas Kenrick and Michael Varnum, used data from nations around the world and the 50 U.S. states to show that population density naturally correlates with these slow life strategies. Then, in a series of experiments (e.g., in which people read about increasing crowdedness or heard sounds of a crowded environment), they found that perceptions of crowdedness cause people to delay gratification and prefer slower, more long-term mating and parenting behaviors.

“In environments where population density is low and there is thus relatively little competition for available resources, there are few costs but lots of advantages to adopting a ‘fast’ strategy,” he suggested. “On the other hand, when the environment gets crowded, individuals have to compete vigorously with others for the available resources and territory.

“To be successful in this competition, they need to invest more in building up their own abilities, which tends to delay having children,” he added. “Because this greater social competition also affects their kids, they tend to focus more of their time and energy on enhancing their abilities and competitiveness. So a slow strategy — in which one focuses more on the future and invests in quality over quantity — tends to enhance the reproductive success of individuals in high density environments.”

Will higher densities always lead to this slow strategy? “Not at all,” said Sng. “In fact, when high densities are paired with unpredictable death or disease, the theory predicts that people will become more present-focused and opportunistic.”

Sng added that the “slow life strategy, when brought to its extremes, also has its own pitfalls. Consider, for example, the preschool craze in dense places like New York City, where parents are obsessed with getting their children into the best preschools. There are similar phenomenon emerging in dense countries like Japan and Singapore.”

The research was partially supported by the Arizona State University Foundation for a New American University.

When people find out there are invisible particles in their food or water, they become alarmed.Arizona State University professor Paul Westerhoff has dedicated his career to producing research that answers people’s questions and moves them past fear.“The things I do are not from a scare-mongering point of view, but trying to answer objective engineering questions,” said Westerhoff, a profess... 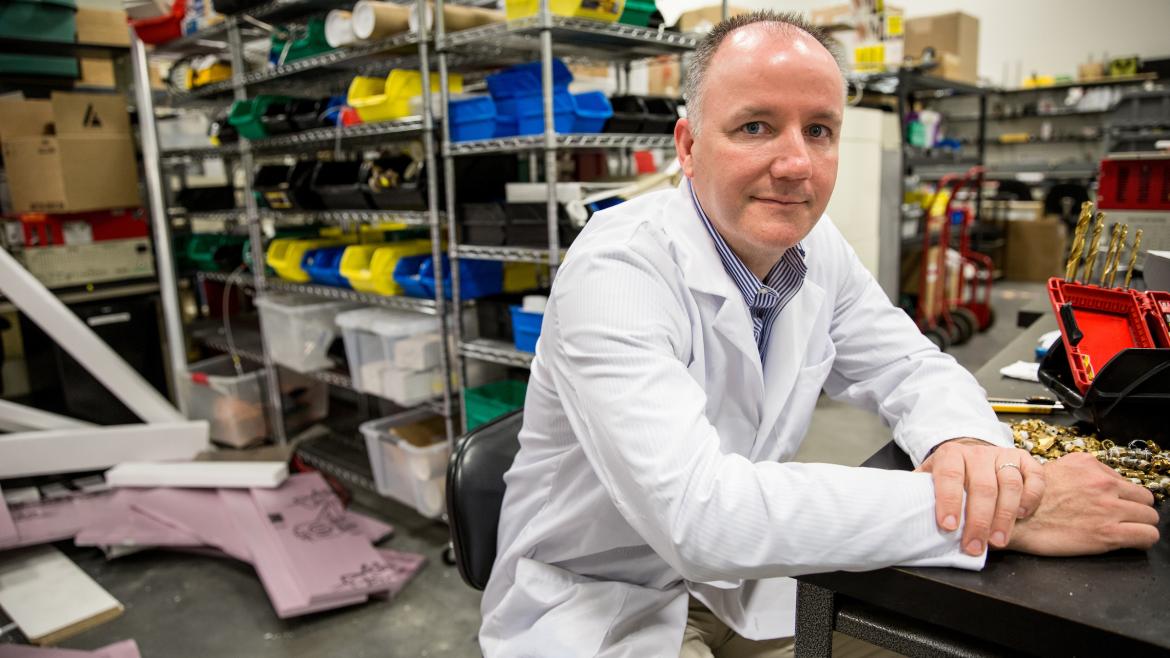 ASU expert on nanoparticles researches how to harness this tiny technology.
February 14, 2017

When people find out there are invisible particles in their food or water, they become alarmed.

Arizona State University professor Paul Westerhoff has dedicated his career to producing research that answers people’s questions and moves them past fear.

Westerhoff, an environmental engineer, has been named one of threeAnne Stone and Robert Nemanich are the other two. Regents' Professors for the 2016-2017 academic year. Regents’ Professor is the highest faculty honor and is conferred on full professors who have made remarkable achievements that have brought them national attention and international distinction.

An expert in nanoparticles, Westerhoff started working on the tiny specks even before they had a name. As a graduate student, he worked on water filtration.

“At that time we talked about these things called ‘sub-micron particles,’ which we couldn’t measure very well but we did a bunch of experiments with them anyway,” he said.

A few years later, when the term “nano” was becoming popular, he realized he had already done it.

“So I put in my first proposal, and it got funded because I was one of the first people who had data!”

Now, he focuses on using nanoparticles to treat and purify water, an interest that was piqued by a hydrology class he took as an undergraduate.

“I understand water,” he said. “I like fishing and swimming and kayaking, and I can go to a river and not only understand the hydrology. But I know why the water is a certain color. And I know where it came from. And I know all the fish that live in it.”

From his first studies, he saw the trajectory of public perception about invisible and unknown substances in the environment, and how that could influence his research.

“In the environmental world, initially it’s like the world’s going to end. But what I’ve learned is that these things move through predictable trends,” he said, using as an example “Silent Spring,” a 1962 book by conservationist Rachel Carson that documented the effects of the use of pesticides, including DDT.

“It’s in this early stage that people are scared, while the agriculture industry and pesticide industry responded by saying that they save millions of lives. In the first few years there’s a lot of uncertainty,” he said.

“Then researchers come along and help reduce that uncertainty.

“Then there’s another phase where politics come in, and there are cost decisions and people think about regulations and finding alternatives,” he said.

“We still find DDT in the environment, but it’s regulated and people really aren’t scared of it. It’s like a 20-year cycle.”

Westerhoff said the key is to know which phase is coming next.

“As a researcher you want to be focusing on what will be the important question to answer in three to five years, before people even know it’s a question,” he said.

“In nano, we were ahead of the game in thinking, ‘Maybe this isn’t so bad, maybe we can use it.’”

Now he’s deputy director of the Nanotechnology Enabled Water Treatment Systems Center, which is focused on developing compact, mobile, off-grid systems that can provide clean water to millions of people who lack it.

Many of Westerhoff’s research projects have been funded by agencies such as the National Science Foundation and the Environmental Protection Agency, but he also works with water utilities, non-governmental organizations and industry partners.

“Industry wants to know the answers to things. It’s moved out of the scientific ‘what if’ toward reality,” he said. “They all have agendas and as long as you understand their agendas, they ask interesting questions.”

“As a researcher you want to be focusing on what will be the important question to answer in three to five years, before people even know it’s a question.”

Westerhoff was commissioned by the environmental activist group Friends of the Earth to see whether there were nanoparticles in powdered infant formula after the manufacturer declined to reveal whether there were.

His lab found needle-shaped nanoparticles in the formula.

“In Europe, there’s a warning on their use in cosmetics but yet they’re in infant formula,” he said.

They discovered the nanoparticles did not dissolve in either water or saliva, but when they put them in stomach fluid, they dissolved instantly.

“They did it to deliver calcium to the gut very efficiently, so they didn’t have to use as much,” he said of the manufacturer. Friends of Earth was concerned that the formula labels didn’t disclose the presences of nanoparticles.

“That’s an example of where one group sees something as a risk to society but a company sees it as a benefit.”

He’s also seen the evolution of how scientific research is portrayed in the media. In 2008, he supervised a doctoral student on a research project that studied the use of nanosilver in socks to eliminate stinky feet. They wanted to know: Did the particles wash out of the socks and into the water supply? The answer was yes.

Journalists jumped all over the story. One headline read, “Toxic socks?”

“We kept telling them the amount of silver is very small and won’t affect anything. None of them got it, and everything they wrote was over the top,” Westerhoff said. “They don’t want to hear that ‘everything is safe, there’s no problem.’ They want to hear ‘there’s nanoparticles in donuts.’ “

In 2015, Westerhoff was named an Outstanding Doctoral Mentor by ASU’s Graduate College. His former students said he is able to deftly balance the guidance that students crave with the independence they need to cultivate.

Troy Benn, who worked with Westerhoff on the nanosilver paper and is now an engineer in Montana, said: “For a young kid it was a little bit shocking because you do all your research in a lab and you don’t talk to anyone outside, and all of a sudden people are asking you what you did.

“Paul’s good at knowing how much guidance each student needs because they’re all unique.”

Kyle Doudrick, who was a graduate student at ASU from 2008 to 2013, said that even with the enormous workload of a full professor, including travel, plus the administrative duties of a vice provost, Westerhoff found time to meet weekly with the students he advised.

“It was a good balance of managing but also letting you find yourself in your independence but not so hands off that you had no idea what’s going on,” said Doudrick, who is now an assistant professor in the Department of Civil and Environmental Engineering and Earth Sciences at the University of Notre Dame.

“The research I did was on nitrate as a contaminant in water,” he said. “He wasn’t the expert but what he was good at was making the student the expert, and that’s the whole purpose of the PhD, is to become an expert at something.”

“I ask them why they want to be engineers, and about half have a life story of something they want to solve. They have a deep passion.

“And if you don’t hear that until you see them in grad school, you’ve lost touch with what motivates people.”