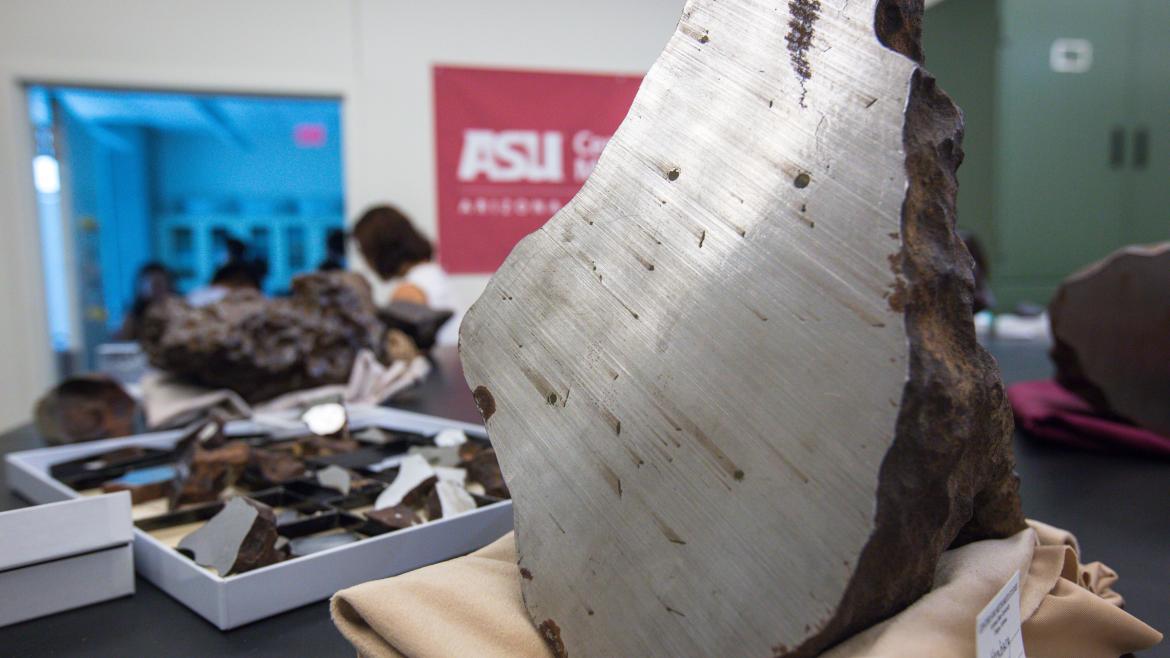 5 things we ❤ about space at ASU

ASU is rapidly becoming known for its out-of-this-world endeavors. From Psyche to CubeSat. From Mars to the moon. Here, in honor of Valentine’s Day, are five things we (heart) about space:

“The yearning for space is a deep human imperative. This drive to explore away from our planet greatly pre-dates the invention of any means to actually do it. Around 100 B.C. Cicero wrote of a dreaming of flying away from the Earth, into space, and looking back at our planet. So to me, space is where we are going, and it is a goal for a better humanity, and a symbol for a positive future.” — Lindy Elkins-Tanton, planetary scientist, director of the School of Earth and Space Exploration, and principal investigator of the NASA Psyche Mission.

Launching in October 2023, the Psyche spacecraft will travel to a metal asteroid using solar-electric propulsion, arriving in 2030, following an Earth gravity assist spacecraft maneuver in 2024 and a Mars flyby in 2025. After a six-year cruise, the mission plan calls for 20 months spent in orbit around the asteroid, mapping it and studying its properties.

2. It's not always a one-way street

Usually we launch things into space, but occasionally space sends things to us.

Center curator Laurence Garvie helped add to the collection last summer by leading an expedition into the White Mountains to hunt down a meteor, which fell in June. Seeing a fireball and finding the meteorite fragments is extremely rare.

The pace of the push to Mars is stepping up as NASA works on its next-generation heavy rocket and private space companies continue their duel for primacy. As any Arizonan knows, you can’t go anywhere without water.

There is evidence of ice on the moon, which can be mined for water and fuel, and an ASU-led NASA mission will map it. LunaH-Map will launch in 2018 and, once at the moon, embark on a 60-day science mission, consisting of 141 science orbits, using a suite of science instruments tucked into a shoebox-sized CubeSat.

It’s one part of the journey to Mars. As NASA said in a press release, LunaH-Map “will help inform NASA’s strategy for sending humans farther into the solar system.”

Where did we come from? Asteroids are leftover debris from the solar system formation process. An ASU instrument is part of the OSIRIS-REx mission to Bennu, an asteroid whose surface dust and dirt may record the earliest history of our solar system. Bennu may contain the molecular precursors to the origin of life and the Earth’s oceans.

Red is the color of romance … and Mars, for which a lot of people have a lot of love.

ASU is home to the Mars Space Flight Facility, a research center in the School for Earth and Space Exploration. Scientists, researchers, and students there specialize in using instruments on spacecraft at Mars for remote sensing research into the geology and mineralogy of the planet.

The instruments based at the facility include the Thermal Emission Imaging System on NASA's Mars Odyssey orbiter and two Miniature Thermal Emission Spectrometers on the Mars Exploration Rovers, Spirit and Opportunity. (A full-size Mars rover model, bedded on reddish-brown sand, dominates the building's lobby.)

Before the loss of NASA's Mars Global Surveyor in November 2006, the facility also operated the Thermal Emission Spectrometer aboard the spacecraft.

A newly published report in the journal Science suggests that more field research is needed to understand the fundamental aspects of terrorism.“There were surprisingly few who had taken the risk to spend time with the ‘terrorists’ to understand how and why young men and women became involved in such behavior and were ultimately willing to die in acts of violence against others,” said co-a...

A newly published report in the journal Science suggests that more field research is needed to understand the fundamental aspects of terrorism.

“There were surprisingly few who had taken the risk to spend time with the ‘terrorists’ to understand how and why young men and women became involved in such behavior and were ultimately willing to die in acts of violence against others,” said co-author Richard Davis, a professor of practice in the School of Politics and Global Studies and a Founding Fellow of Centre for the Resolution of Intractable Conflict at University of Oxford.

The report, “Challenges in researching terrorism from the field,” looks into why despite efforts from intelligence agencies, there is still so much we don’t know about terrorism.

Here he talks further on researching terrorism and how we can expect to move forward.

Question:  How did you get involved in researching terrorism?

Answer: In 2005, I was appointed by George W. Bush to become the director of terrorism prevention at the White House after having served the secretary of Homeland Security. My responsibility as a policy director included building the national capacity to prevent terrorism over the long term. After months of working to understand what we knew within the U.S. government about these things, it became clear that our understanding was inadequate.

I came to the faculty of ASU to help the university and students have an opportunity to further the field research necessary to lessen politically motivated violence. I have found myself in good company with colleagues like Mark Woodward and Hasan Davaclu, who are also engaged in field-based research in conflict areas.

Q:  Your co-authored article describes how little statistical or clinical reliability exists for understanding terrorism or terrorists. Why do you think that there are problems with data collection?

A:  There is a great deal of terrorism research. However, very little of it is with the actual combatants in the field. Even less use empirically designed methods. Most often, terrorism research is qualitative and is done from afar.

The best science comes from going to the field and designing experiments that are theoretically motivated. The challenge is that some of these places that researchers must go are frightening. Unfortunately, there are not many researchers willing to take the risk to bring such data back to the scientific and policy communities.

A:  Ideally, the U.S. government would fund research that would yield enough understanding to make troop deployment in conflict areas unnecessary. Greater understanding of armed groups, their leaders and the supporters can yield critical information.

The idea is to see how armed groups might adapt in ways that reduce violence.

Understanding the dynamics and values that underscore the projection of violence by these groups can help us enhance policies in such ways that lessen violence and the need for direct engagement by U.S. armed forces. Furthermore, creating a less accommodative environment for an armed group is one tool to lessen their ability to project violence abroad.

A: The most effective prevention programs I have seen are those that use youth to lead pro-community efforts with populations that are supportive of violent extremist groups — for example, beach clean-up in Yemen, counter-extremism in Pakistan and counter ISIS recruitment in Syrian refugee camps.

Young people that are willing to stand in front of their peers and push non-violent means to make community change are unsung heroes.

USAID, the United Nations, the World Bank and other development agencies should further fund youth led community activism for non-violence in areas where recruitment to armed groups are pervasive.  One or two programs won’t do it; programming must be broad and deep with commitments from governments.

Q:  What should be the next steps on combatting terrorism using field research based on your groups findings?

A:  For the last 10 years, some of my research and that of my colleagues, has been on understanding how values become sacrilized (non-tradable) and under what conditions people make costly sacrifices for their values, including fighting and dying.

This research identifies the role of identity fusion of an individual to a group, sacrilized values and the strength of spiritual formidability in the willingness to fight harder than your opponents.  We believe that these studies need to be replicated in other conflict zones to better understand how we can use this information to lessen the willingness of armed groups to use violence to achieve their aims.

Answers have been edited for length