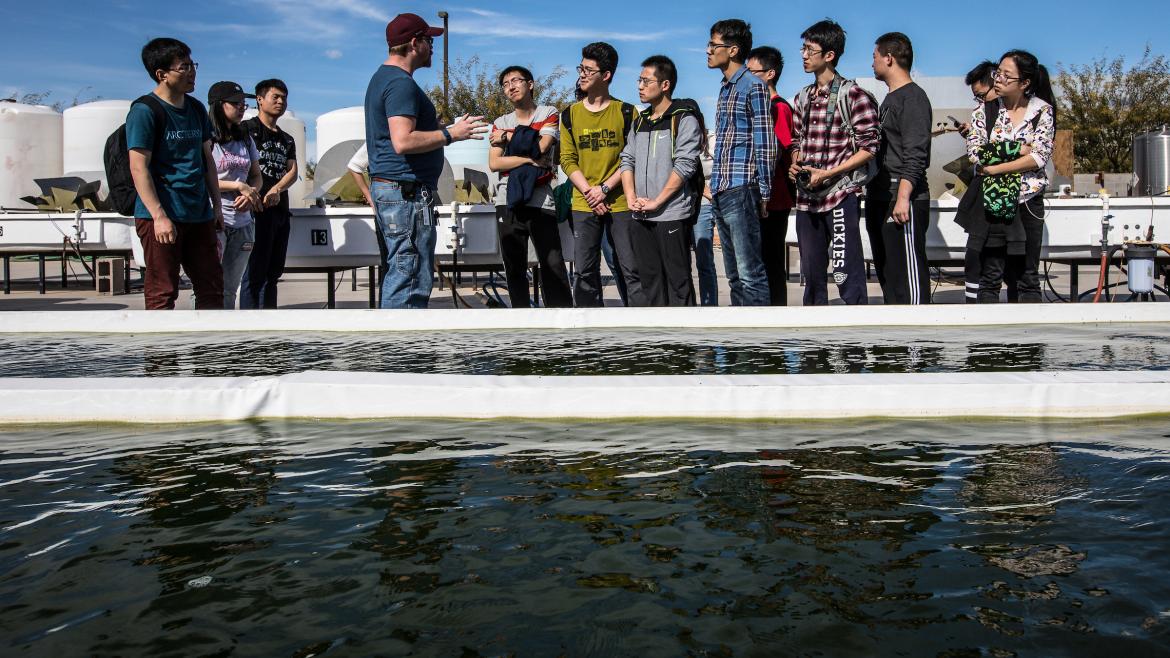 The 16 students came from Beijing's Beihang University, an elite research university known for launching the first light passenger aircraft in China in 1950s.

“The thing about these students that is most impressive is that they’re pretty serious engineering and math scholars who want to find solutions to the planet’s current and future sustainability challenges,” said Ryan Johnson, executive director for the School of Sustainability's Executive and Professional Education.

Professor Marty AnderiesMarty Anderies is a professor in both the School of Sustainability and the School of Human Evolution and Social Change, the latter in the College of Liberal Arts and Sciences. He is also a senior sustainability scientist in the Julie Ann Wrigley Global Institute of Sustainability and associate director of the Center for Behavior, Institutions and the Environment. introduced to students key sustainability challenge areas of food, water, energy and urbanization from the local to the global scale. His sustainability class was a combination of learning activities: documentary and dialogue, interactive role-playing games, field trips and lectures.

By watching short documentaries, students got to dive into specific cases on sustainability. For instance, “Soil Carbon Cowboys,” created by ASU professor of practice Peter Byck, shows how ranchers in Mississippi, North Dakota and Canada regenerate their soils while making their animals healthier and their operations more profitable.

Students also spent a class session playing an interactive Resilience Game that put the students into the role of city managers trying to solve problems such as walkability, air quality, aging infrastructure and sense of community. 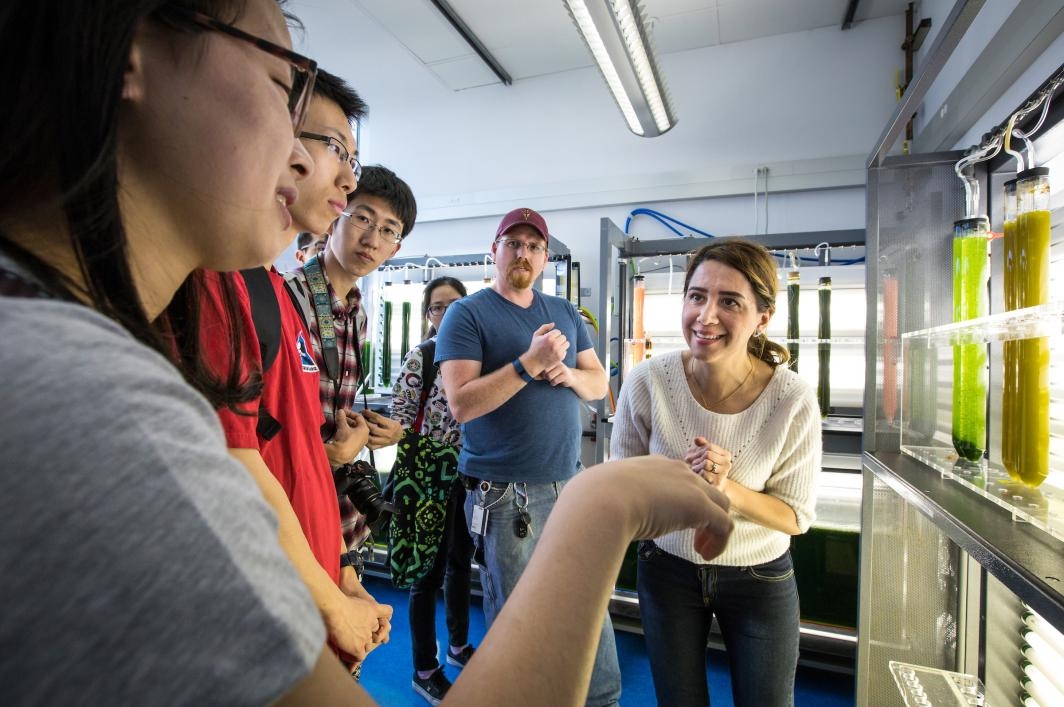 Doctoral student Shahrsad Badvipour (right) listens to a question from the group of 16 students from Beihang University as they tour ASU's algae lab on the Polytechnic campus on Feb. 7. The Chinese students were taking part in a two-week sustainability workshop sponsored by the School of Sustainability. 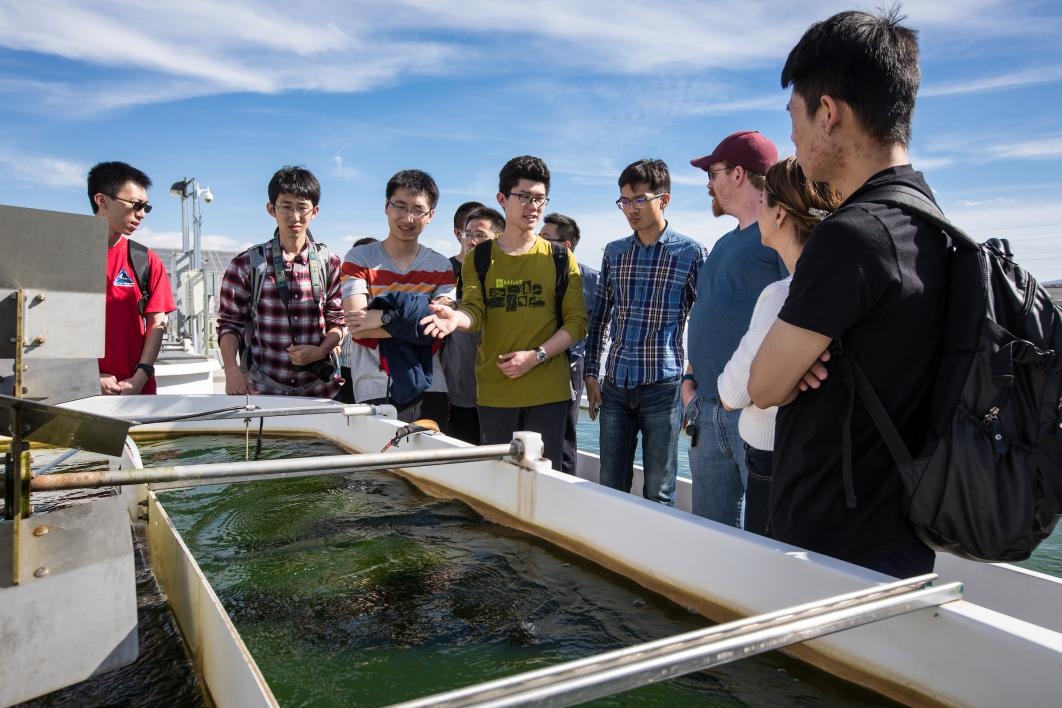 One of the students questions doctoral students Everett Eustance and Shahrsad Badvipour at the algae ponds at ASU's Polytechnic campus. 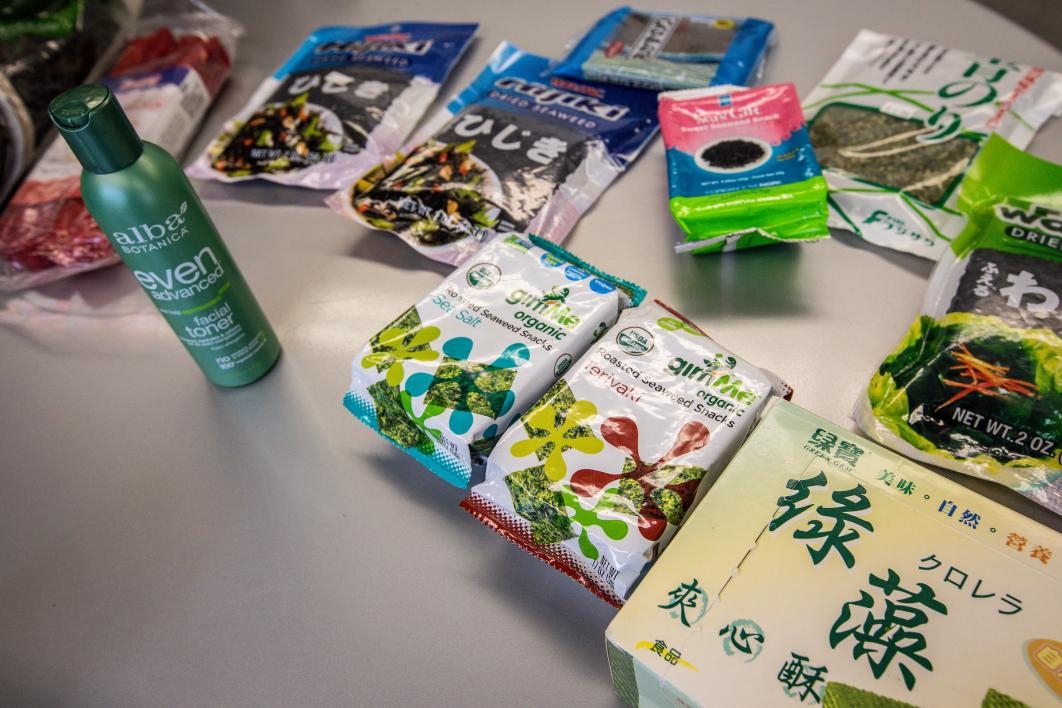 Exploring samples of commercial products is part of the workshop as the Beihang University learn about ASU's work in researching algae as a biofuel and as protein and carbohydrate food source.

The students were living in Arizona during Chinese Lunar New Year break, and an authentic Chinese meal in Mesa and a performance by a Chinese-American string quartet didn’t disappoint.

Whether it was the First Fridays art walk in downtown Phoenix, a tour to the Native American archaeological site Pueblo Grande or even a special sustainability tour to Chase Field, the group got to experience a taste of the American Southwest, both ancient and modern.

Team lead Jianglong Zhang is a doctoral student at Beihang University who helped design this partnership workshop. He said they chose ASU because the university is well-known in academia in China for its leading research and heavy focus in sustainability.

Top photo: Doctoral student Everett Eustance (center left) tells a group of 16 students from Beihang University about ASU's work in researching algae as both a biofuel and as protein and carbohydrate food source at the Polytechnic campus on Feb. 7. Photo by Charlie Leight/ASU Now

The power of writing to communicate knowledge

A roomful of teachers are huddled in groups around pages of text, hurriedly highlighting, circling and underlining certain words and phrases. This isn’t a paper-grading marathon, though — it’s a writing workshop, and the pages they’re marking up are op-ed letters.Find Your Voice: Using OpEds to Tell Your Story and Fight for Justice, sponsored by the Central Arizona Writing Project (CAWP), ... 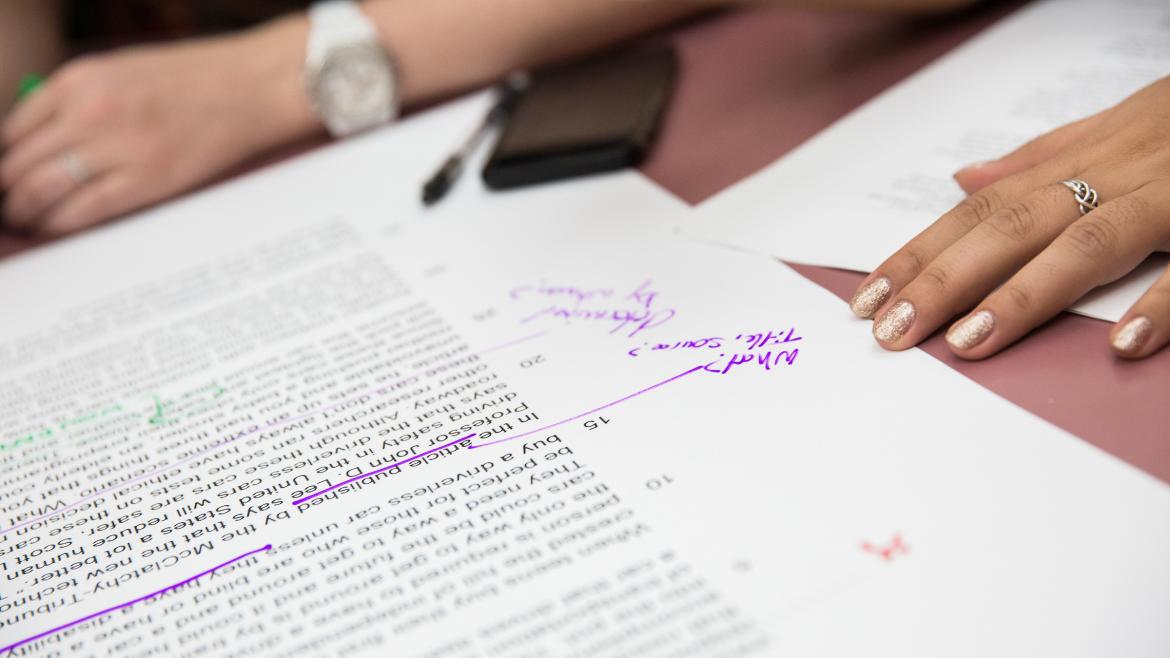 The power of writing to communicate knowledge

Many ASU degrees offer courses on writing, communicating to a general audience.
Op-eds can be a valuable tool for both voicing opinion and staying informed.
ASU journalism prof says op-eds should be clear, concise and interesting.
February 10, 2017

A roomful of teachers are huddled in groups around pages of text, hurriedly highlighting, circling and underlining certain words and phrases. This isn’t a paper-grading marathon, though — it’s a writing workshop, and the pages they’re marking up are op-ed letters.

Find Your Voice: Using OpEds to Tell Your Story and Fight for Justice, sponsored by the Central Arizona Writing Project (CAWP), brought together elementary and high school teachers from across the Valley at ASU Prep Academy’s downtown Phoenix campus in February to learn practical lessons for both personal writing and teaching writing to their students.

ASU associate professor of English and director of CAWP Jessica Early was on hand for the event. She said learning how to write op-eds can impart “really important, practical skills that help people to be participatory citizens, and also help students learn how to write for a real audience.”

An awareness of the value in teaching students to be better communicators is evident at ASU across disciplines. Several degree tracks — including those in the fields of sustainability, science and health — require or offer courses geared specifically toward learning how to communicate the sometimes-complicated intricacies of a subject to a more general audience.

“I think it’s part of your obligation as a learned person … that you make your knowledge or the work you’re doing understandable to others,” Zachary said.

He points to School of Earth and Space Exploration Foundation Professor Lawrence Krauss as an example of an academic who “writes very effectively and clearly about science subjects.”

School of Life Sciences Regents’ Professor Stephen Pyne, an expert on fire history, teaches courses in the certificate program and has also written and published widely, including several op-eds for the New York Times. He cited wise words from fellow SOLS professor Brian Smith, who said, “If we don’t start communicating better with the public, we’ll be out of business.”

Communication a way to change the world

Heather Grimm, who teaches science at ASU Prep, admits she didn’t know much about persuasive writing or communicating expertise with the public before coming to the CAWP workshop but that she sees the value in it. 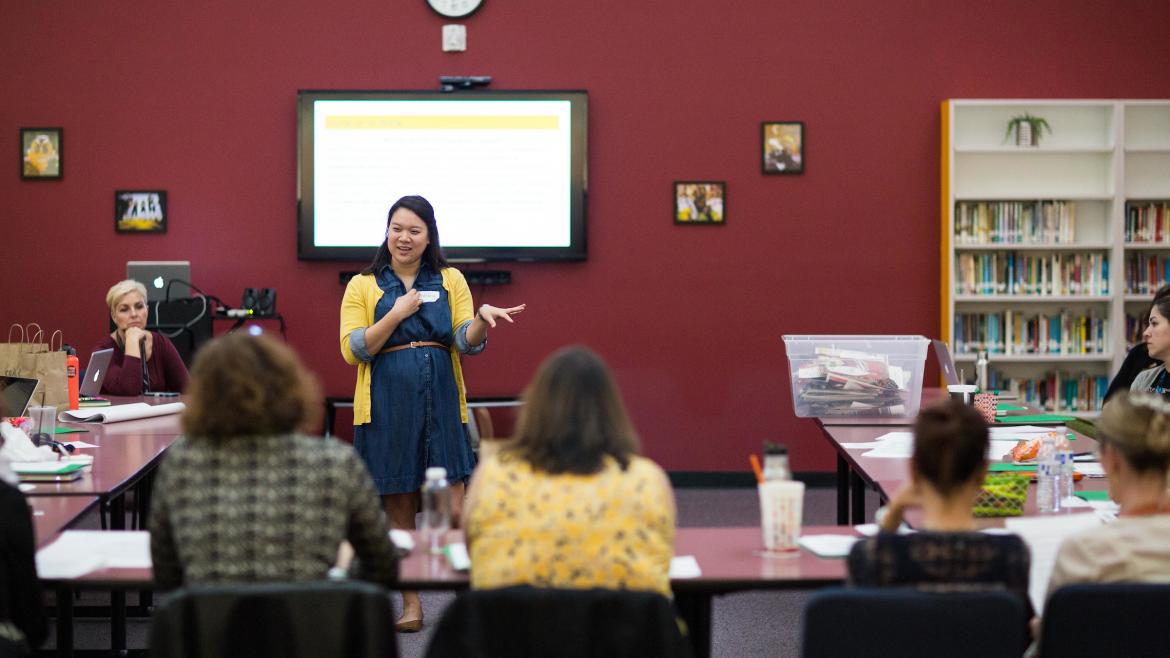 “Great ideas start very small,” she said. “People used to think the world was flat. Allowing people to voice their knowledge and opposition can change opinions.”

Tracie McMurray, an English teacher at Mountain View High School in Mesa who also attended the workshop, said she sometimes worries that misinformation perpetuated by the media can “make it harder for people to understand what’s really going on.”

Misinformation is all too common in the media, agrees ASU professor Carol Johnston. She serves as associate director of the nutrition program, which offers a bachelor’s in nutrition communication.

“There is a lot of miscommunication and misconception out there, and nutrition is one of those topics everyone has an opinion about,” she said.

The nutrition communication program was started so that nutrition students could train in the area of media and communication in order to combat falsities and half-truths about the field.

“Training people to be good communicators to help set the record straight with factual information is so important,” said Johnston, “especially now with social media,” which can spread bad information very quickly.

Attendees at the workshop expressed similar concerns about social media, saying that they felt that learning to write persuasively in a more structured way, as in an op-ed, lent more credence to their points of view.

Ashley Yap, an English teacher at ASU Prep and one of the workshop leaders, added to that sentiment.

“We have outlets like social media, but those are bite-sized,” Yap said. “Op-eds force you to pause and consider what you want to say and how to say it. It’s this special place that’s different from just firing off a tweet or sharing something that’s already been written.”

“What op-eds do is allow us to hear from many different voices on any given topic,” she said, giving readers an accessible way to grasp the pros and cons of an issue. “They can be a really effective way to get people to think a little more about their position.”

Tips for an effective op-ed

Wallace shares her advice for those who hope to write an op-ed — and get it published:

Top photo: ASU Prep biology teacher Camila Tompkins points out some weaker arguments in an op-ed during a writing workshop at ASU Prep in February. Photo by Deanna Dent/ASU Now

Solutions Journalism Politics The College of Liberal Arts and Sciences Department of English School of Life Sciences School for the Future of Innovation in Society College of Health Solutions Center for Science and the Imagination Barrett, The Honors College School of Historical, Philosophical and Religious Studies School of Earth and Space Exploration Faculty Community Media Policymakers