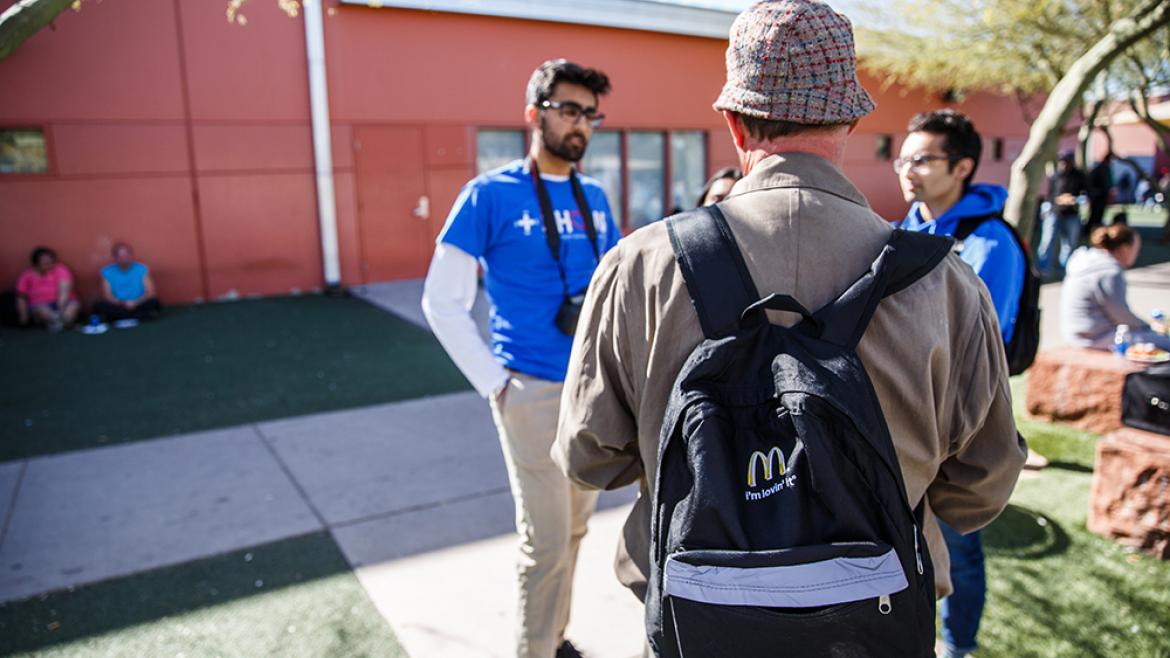 Humans of SHOW seeks to inspire compassion for Phoenix homeless

There are two worlds in downtown Phoenix.

One is filled with skyscrapers, new condos and fancy restaurants. Sidewalks are clear, clean and landscaped. But on 12th Street, the skyline is far off. Homeless people gather in dozens, dragging belongings, pushing shopping carts and shuffling past the city’s Human Services Campus.

Each person here has a story, and a group of students have made it their mission to tell it.

“You can’t really write a story about us until you sit down with us, look around and understand,” said Ryan Kacey, who lives in a nearby shelter. “So many people are not willing to do that.”

Arizona State University student volunteers Faiz Khan and Chandan Saini took photos and recorded audio as Kacey described his life. The work will contribute to an online gallery, inspired by Humans of New York, to induce compassion for a group of people who often go overlooked.

Khan and Saini volunteer at the Student Health Outreach for Wellness Clinic, a health care center run by ASU, Northern Arizona University and the University of Arizona.

Between duties, they pass out water bottles, snap pictures and listen.

The stories they collect end up as part of the Humans of SHOW social media campaign that draws attention to the clinic on the Human Services Campus, featuring portrait-style photographs of the people they serve.

“People should try to engage with the homeless more,” said Saini, a senior studying psychology at ASU. “And that’s the point of this project, to break down the barriers, stereotypes and stigmas, so they can be viewed as people.” 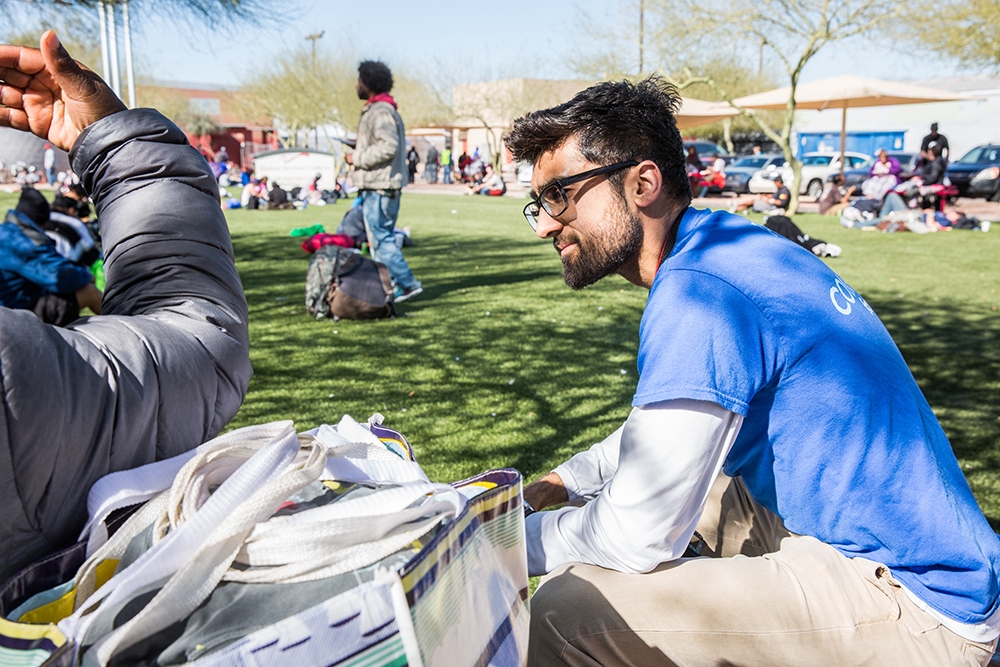 Chandan Saini, a Student Health Outreach for Wellness volunteer, interviews a woman at the Human Services Campus. Saini is a senior psychology major at ASU who works with Humans of SHOW, a student initiative to tell the stories of Phoenix's homeless population. 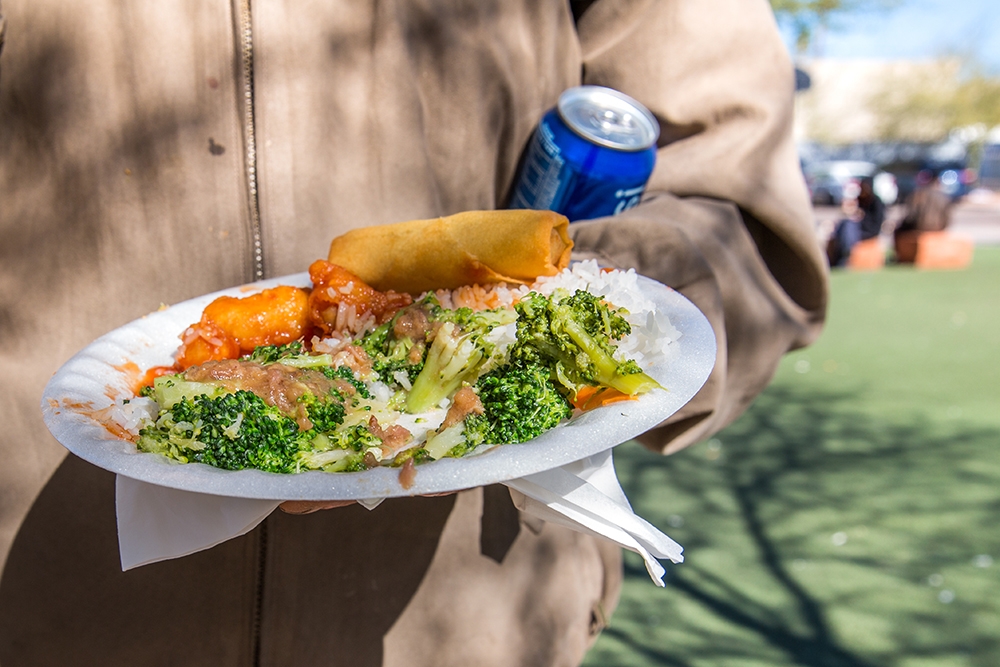 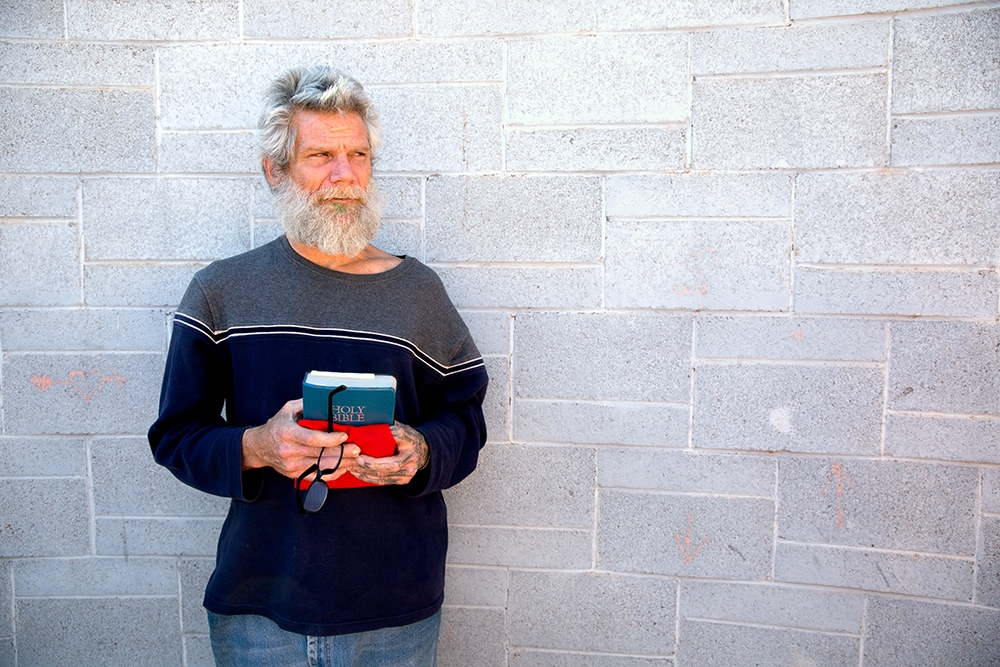 Donovan Euronmize thinks for a moment while talking with the student volunteers. He is from Las Vegas and has been in Phoenix for about one month. 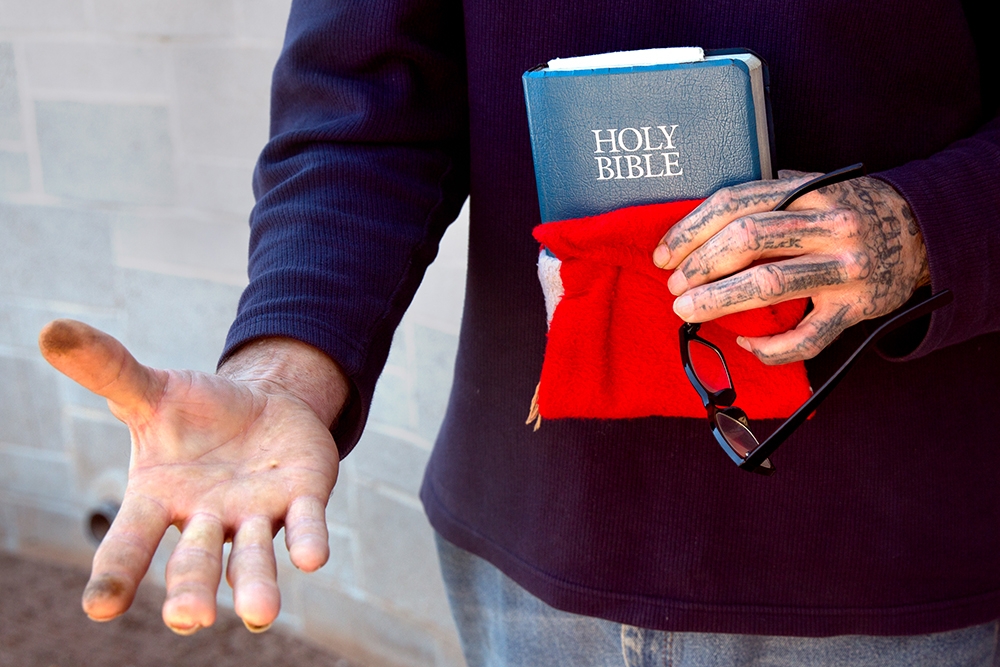 Euronmize talks about the religious beliefs that keep him going through homelessness.

The project is the brainchild of Maggie Delaney, a physical therapy graduate student at Northern Arizona University. It came to her after someone said something offensive.

“There was an unsavory comment I heard from a health care provider who hadn’t worked with this population before,” Delaney said. “They had an experience with a homeless client who came in and thought they didn’t deserve free or quality care because they are homeless.”

Delaney worked with three other students to pitch the idea to leadership at the SHOW Clinic, and it has grown quickly.

She wanted to give homeless people a platform, a way to be heard and seen.

“We all sit at home, and we don't think about them,” Delaney said. “They don't have a voice or avenue to let people know who they are or how they ended up homeless. They’re pretty misunderstood.”

Humans of SHOW has pushed volunteers to look beyond health care.

“I wanted to get out of my comfort zone, which is why I signed up to participate in this project,” Saini said. 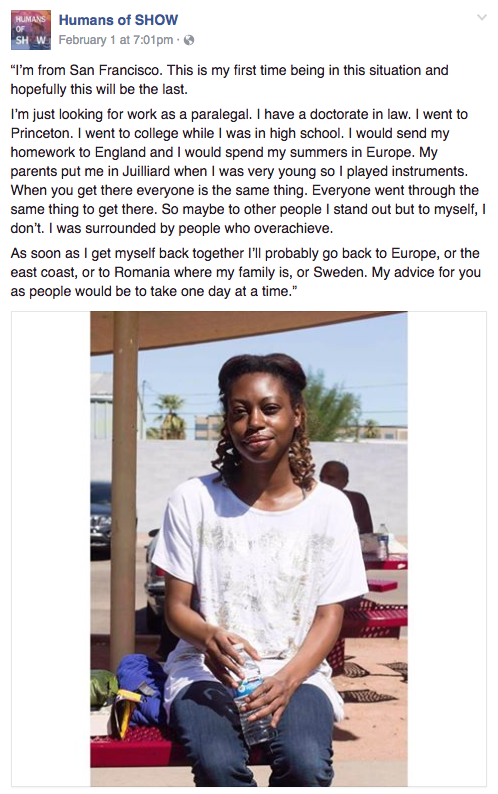 A handful of stories have been published already.

“People have preconceived notions that the homeless are unhygienic, uneducated, unintelligent, unmotivated, addicted, but that’s just not true,” Khan said. “There are people like Ivy, where this is just not true. She is very educated and intelligent, but she’s in a situation that may or may not be temporary.”

The published stories don’t mention homelessness. Nor do they always show the face of the subject. It’s meant to blur the lines between people who have places to live and those who don’t. By erasing the distinction, the volunteers hope to create empathy.

“Saying these people should go get a job lacks empathy,” Delaney said. “So after this project started, I could actually tell stories about people who are in these different situations in very different ways, people who were once completely functional in society and many who are educated.”

Saini sat with a woman who wished to remain unidentified. “No one really knows me,” she said. “People talk to me. People see me. But no one knows me.”

The woman was hesitant at first, but before long she opened up to Khan and Saini.

Delaney has been pleased with the interactions. “At first, I thought no one would want to talk about it because we would ask what they think about homelessness,” Delaney said. “The last thing we wanted to do is exploit these people. I wanted them to all have a choice.”

Once the volunteers completed their rounds, they return to the clinic where they transcribe interviews, edit photos and schedule posts.

“It’s important to realize that these are people, and you need to imagine them complexly,” Khan said. “They have their own stories, and we shouldn’t turn them into a one-dimensional character or just an image in your head that you view negatively, because that is not good for anybody.”

Top photo: Ryan Kacey talks to Student Health Outreach for Wellness volunteers ASU senior Chandan Saini (left) and junior Faiz Khan as part of the Humans of SHOW project. Kacey, who is originally from New Jersey, used to be a maintenance worker in Phoenix. Photo by Anya Magnuson/ASU Now

What does a flamingo's heart attack, tiger's breast cancer, or gorilla's eating disorder tell us about human health? Animals share most medical and psychiatric issues with our species. Evolutionary biology and comparative medicine offer illuminating insights into the nature and future of human illness and health.Barbara Natterson-Horowitz is a professor of medicine in the division of cardiology at...

What does a flamingo's heart attack, tiger's breast cancer, or gorilla's eating disorder tell us about human health? Animals share most medical and psychiatric issues with our species. Evolutionary biology and comparative medicine offer illuminating insights into the nature and future of human illness and health. 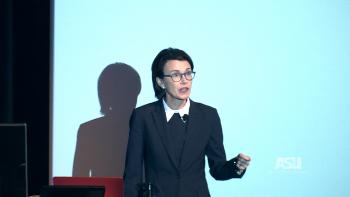 She serves as a cardiovascular consultant to the Los Angeles Zoo as a member of its Medical Advisory Board and is Chair of the Zoobiquity Conference, a national educational program that facilitates interdisciplinary discussions between physicians, veterinarians and others in the health professions.

In 2012, Natterson-Horowitz co-authored the New York Times bestselling book, "Zoobiquity: The Astonishing Connection Between Human and Animal Health." Zoobiquity was named Discover Magazine’s Best Book of 2012, The China Times Best Foreign Translation of 2013, and a finalist in the American Association for the Advancement of Science Excellence in Science Books 2012. Her work has been featured in the New York Times, The Guardian, Wall Street Journal, Nature, Scientific American, and New Scientist, among others.

Natterson-Horowitz completed her undergraduate studies at Harvard College and received a master’s degree from Harvard University. She received her medical degree from the University of California, San Francisco and completed her Internal Medicine and Psychiatry residencies at the University of California, Los Angeles where she served as chief resident in both departments. She completed her cardiology fellowship and one year of advanced training in heart failure and cardiac imaging at the UCLA Division of Cardiology.

This presentation was sponsored by the Center for Evolution and Medicine at Arizona State University.