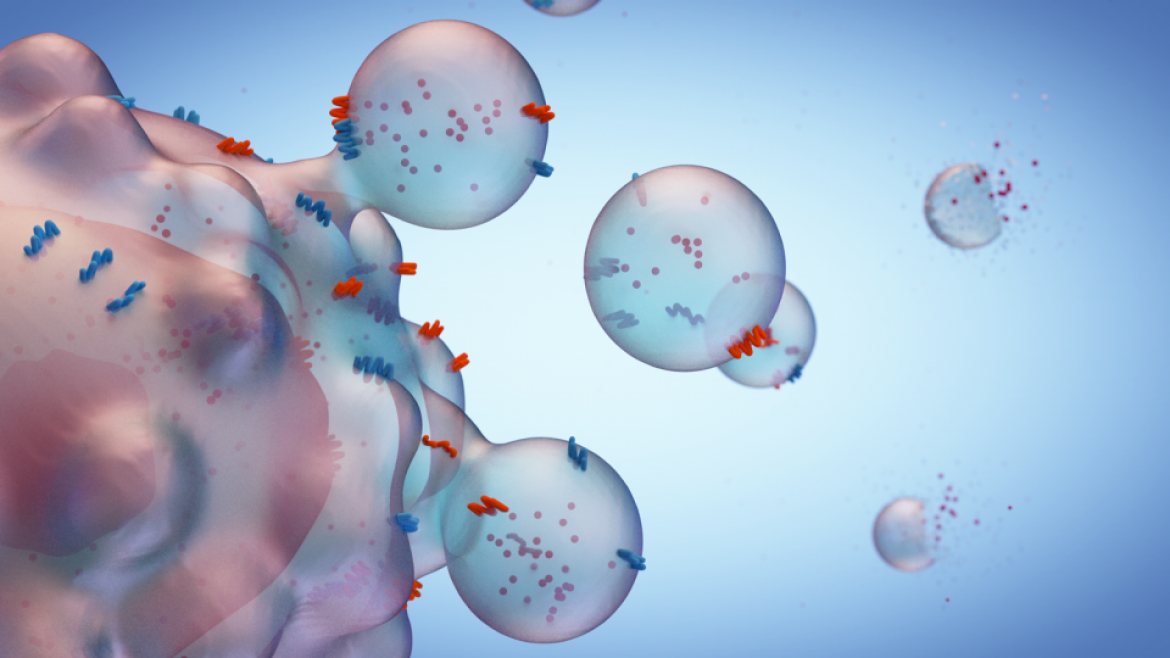 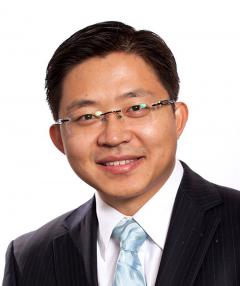 For coastal residents of the east African country Mozambique, severe floods that endanger their health and lives are a frequent reality. Helping communities cope with extreme weather events is a challenge for locals and development agencies alike. Taking the cultural attitudes of those served into account, however, could be the key to a better impact. That’s why Chemonics International, a global... For coastal residents of the east African country Mozambique, severe floods that endanger their health and lives are a frequent reality. Helping communities cope with extreme weather events is a challenge for locals and development agencies alike.

Taking the cultural attitudes of those served into account, however, could be the key to a better impact. That’s why Chemonics International, a global development company, tapped anthropologists from Arizona State University’s School of Human Evolution and Social Change to help with its five-year, USAID-funded effort called the Coastal City Adaptation Project (CCAP).

In 2014, CCAP began its mission to help neighborhoods preserve nearby mangrove forests, which protect against erosion, and encourage the construction of “climate-smart” homes and latrines, built high off the ground to prevent typhoid and cholera spread after a flood. Last December, the ASU team joined the effort by helping development workers capture the cultural attitudes surrounding these issues.

“Our goal as anthropologists is to be able to measure a shift in the acceptability or the norms of practices, such as where people are going to the bathroom and how they dispose of their trash,” said Roseanne Schuster, a postdoctoral research associate with the school’s Center for Global Health. “For example, not everyone may decide to live in a climate-smart house by the end of those five years, but hopefully they will better understand the benefits.”

“The goal is to find smarter, more cost-effective research methods that allow us to track how communities are understanding and responding to projects in real time, and improve them so they make sense at the community level.”
— Alexandra Brewis Slade, President's Professor

ASU’s Center for Global Health has been working for several years on new ways to capture cultural changes over time, applying their methods to a range of academic topics such as body image and water use. However, this is the first time the researchers have had the chance to apply them to monitoring development projects.

Now, they are able to put their ideas to the test in Mozambique by comparing the data gathered using their new methods to data gathered using traditional survey methods and focus group discussions. In this way, they hope to capture cultural norms in ways that can better inform program design.

“The goal is to find smarter, more cost-effective research methods that allow us to track how communities are understanding and responding to projects in real time, and improve them so they make sense at the community level,” said President’s Professor and fellow team member Alexandra Brewis Slade.

This goal is also at the heart of a joint initiative between the center and Chemonics, called the Global Impact Collaboratory, which aims to be a testing ground for new social research methods that are specially designed for working in low-resource communities on tight timelines.

“Development projects need to show results in a short timeframe, which doesn’t always allow space for testing radical innovations,” Brewis Slade explained. “The Global Impact Collaboratory is a special place where those innovations can take shape through the thoughtful interaction of the very best social scientists and development experts, with a focus on how people on the ground understand and relate to that effort.” 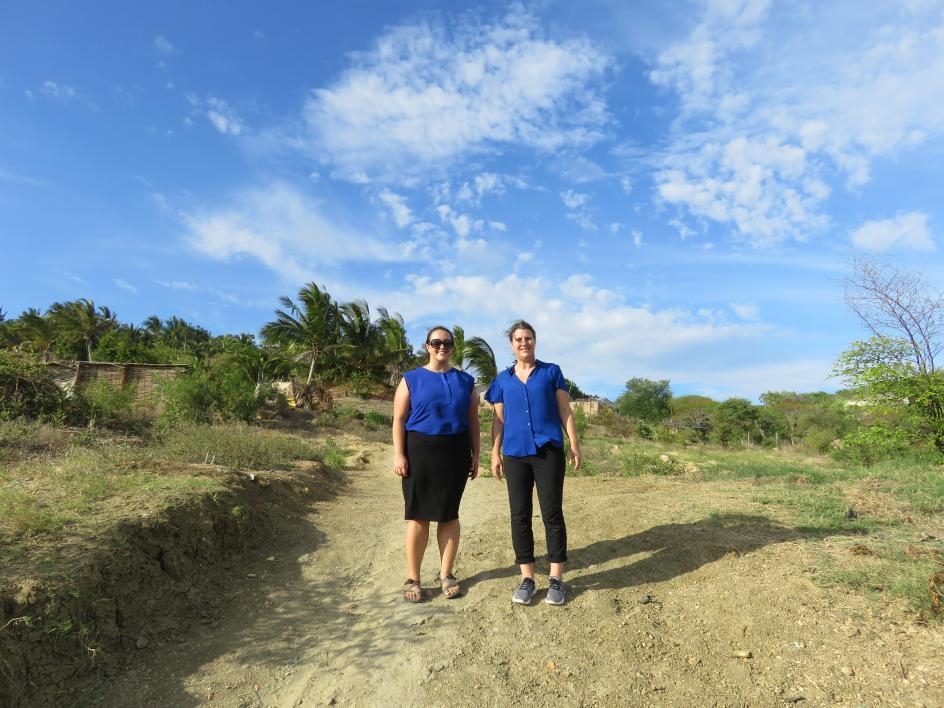 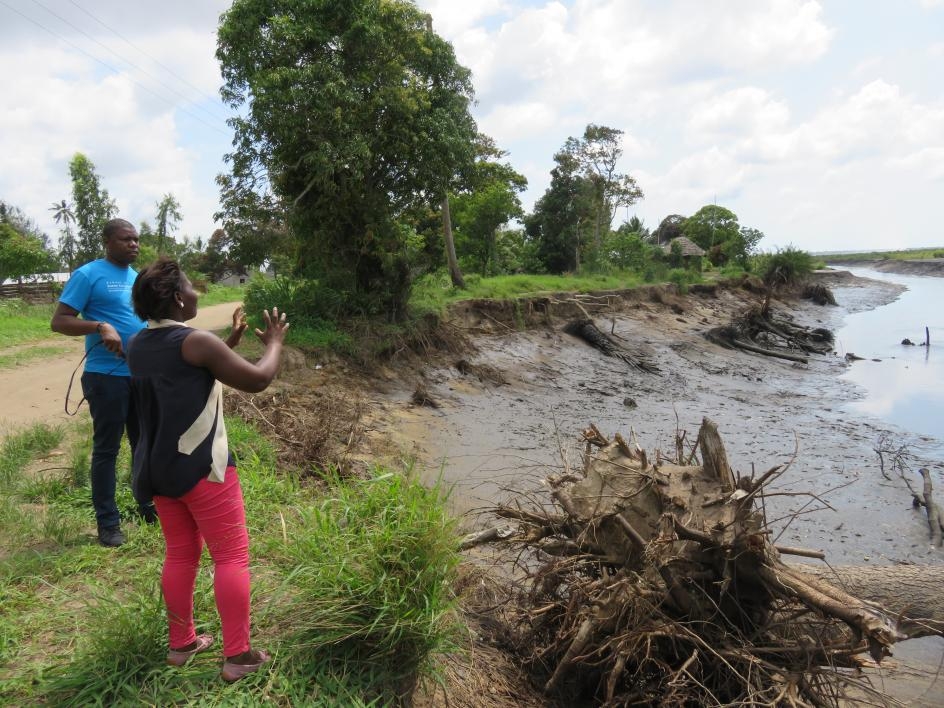 Ivete Fato and Gilberto Maui of Chemonics' Coastal City Adaptation Project discuss erosion due to the deforestation of mangroves in Quelimane, Mozambique. 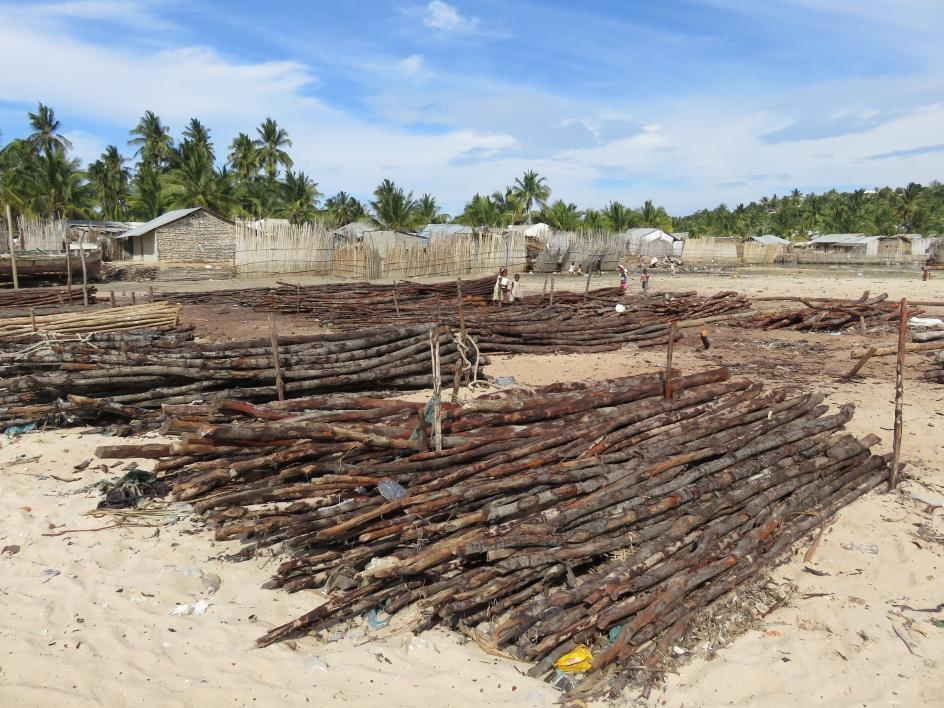 Mangroves are cut for use in construction and left out to dry in the sun. 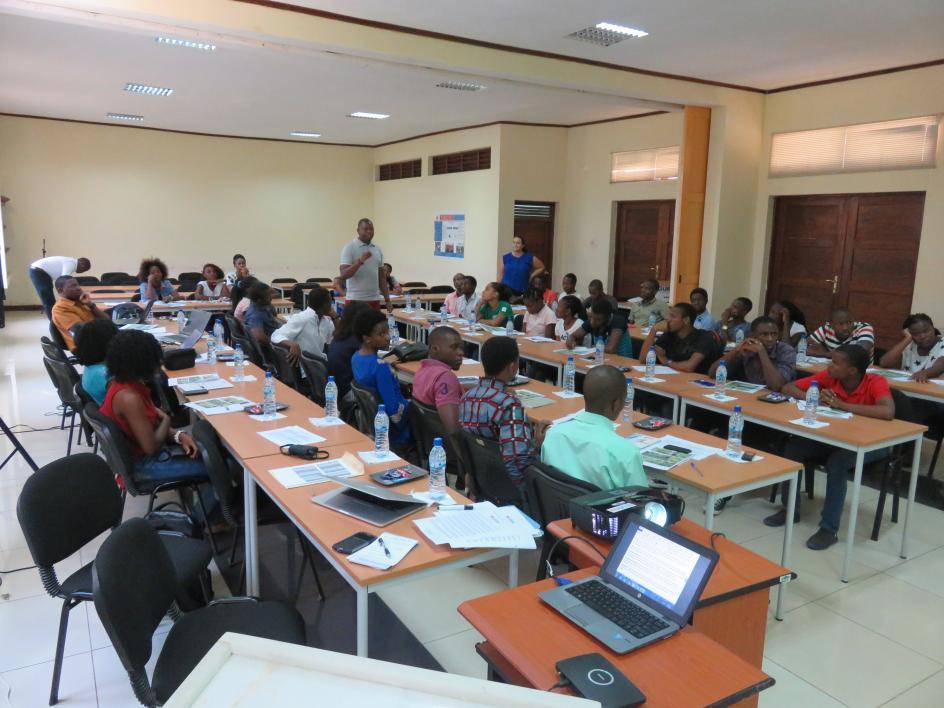 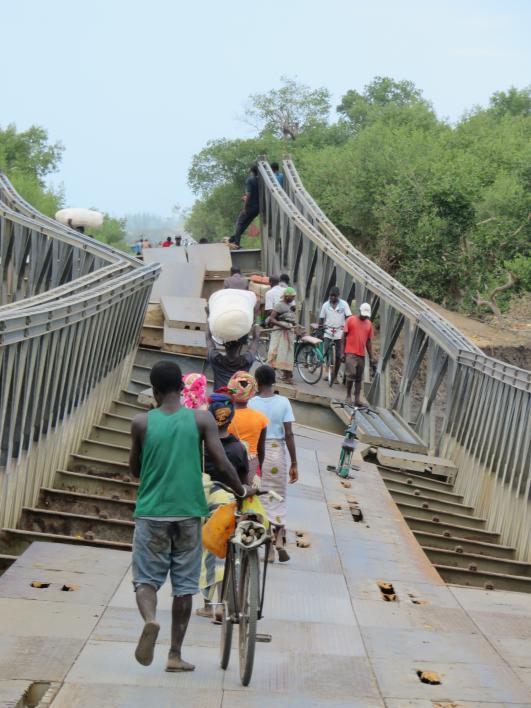 A bridge in Quelimane, Mozambique, has been warped by flooding and erosion. 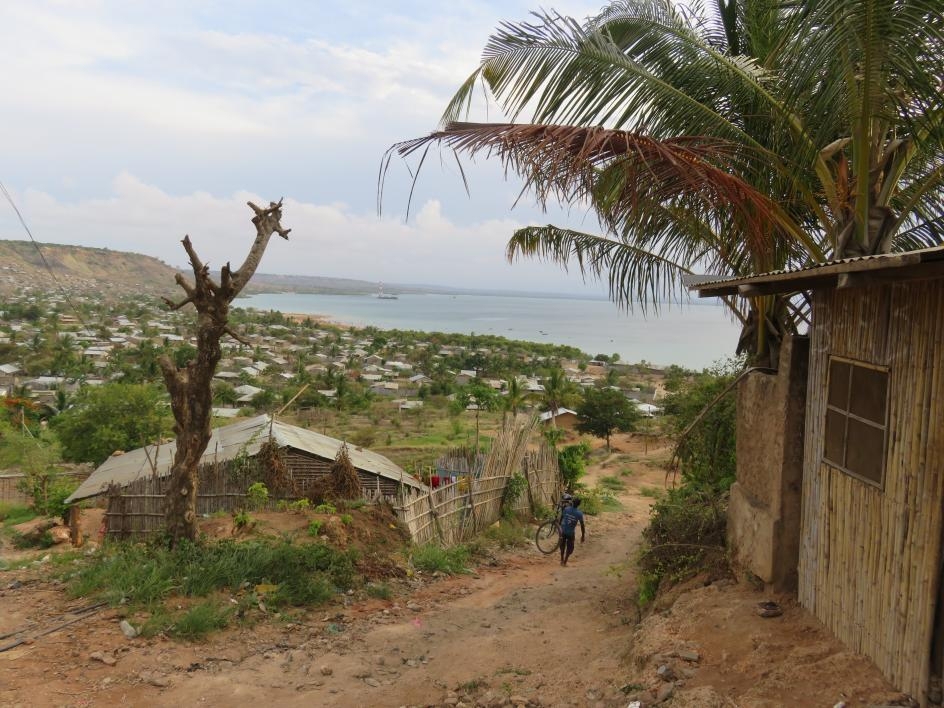 One of the sea-level neighborhoods in Pemba where the researchers collected data. The government is attempting to dissuade settlement, but construction continues. Some families spend hours each day traveling up and down the hill to haul fresh water. 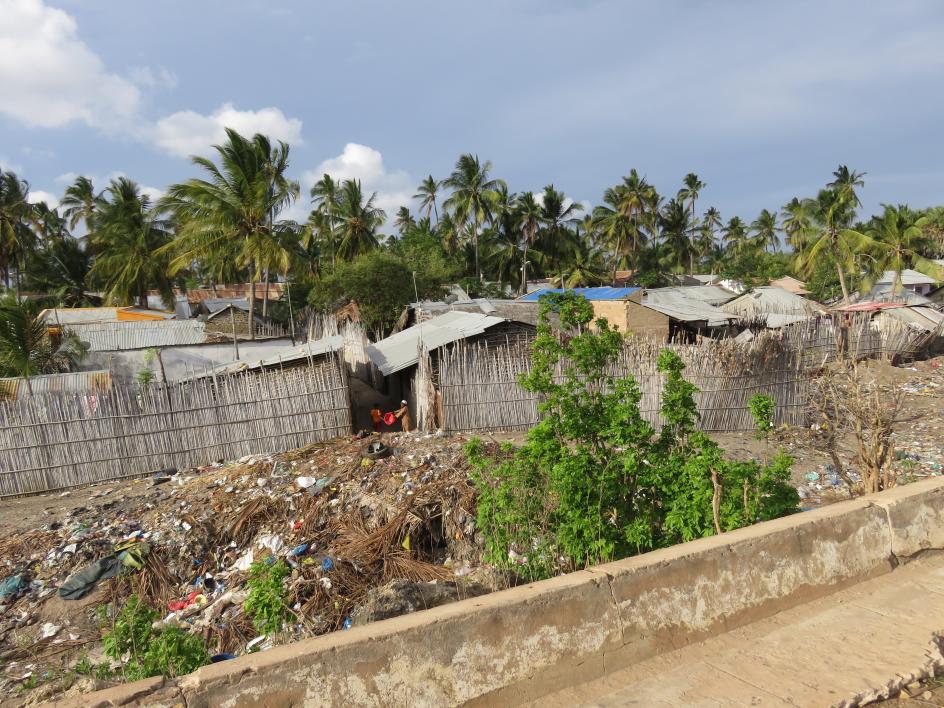 Trash disposal is a challenge in many of the study communities, and it causes major health problems when the area has been flooded.

Even with solid research methodology on their side, Schuster and Brewis Slade know that local partners are always key to long-term, sustainable solutions. Their first steps upon arrival in Mozambique included two weeks of training university professors and students in these new methods. These local experts were then able to help refine the tools and figure out the best ways to collect the necessary cultural data.

Though the professors and students came from a wide array of fields such as the natural sciences and engineering, they were united in their desire to learn social science methods and use them to benefit the people around them.

“The hope is that adding some simple, but effective, social science skills to their tool kits will better enable them to reach their own professional goals, as well as those for improving their communities,” Brewis Slade said.

Around 60 students and 15 professors from universities in the coastal cities of Pemba and Quelimane were trained on cultural research methods. They conducted more than 450 cultural surveys and 60 semi-structured interviews in their respective cities.

“From the data we collected together, we can identify cultural norms that are important to the community and identify what the culturally correct perspectives are on these issues,” Schuster said. That information will serve as a baseline to measure people’s attitudes, gauge their behaviors and identify potential barriers and motivators for behavior change before the project begins to try to implement change.

Researchers will repeat the data collection two more times throughout the project in order to track any resulting shifts, allowing them to improve the project as it goes along.

One example of a topic addressed in these surveys is the local mangrove forests, which help prevent erosion but are also depleted in some areas because they’re used for firewood and building materials.

In this case, the survey asked how crucial people felt the wood supply was for their way of life, if they had access to other materials and whether they thought replanting the mangroves was important.

“The most important question we can ask coastal Mozambicans is if they believe climate change actually threatens their lives, and whether they think they need strategies for adapting,” Schuster said. “If people don’t believe that it’s an issue, or that they need support in adapting to climate change, then we have to focus on that discrepancy first before we can make a larger impact in terms of adopting specific adaptation strategies.”

Top photo: Mangrove deforestation causes serious erosion in Quelimane, Mozambique. A house previously stood where the bank has washed away.