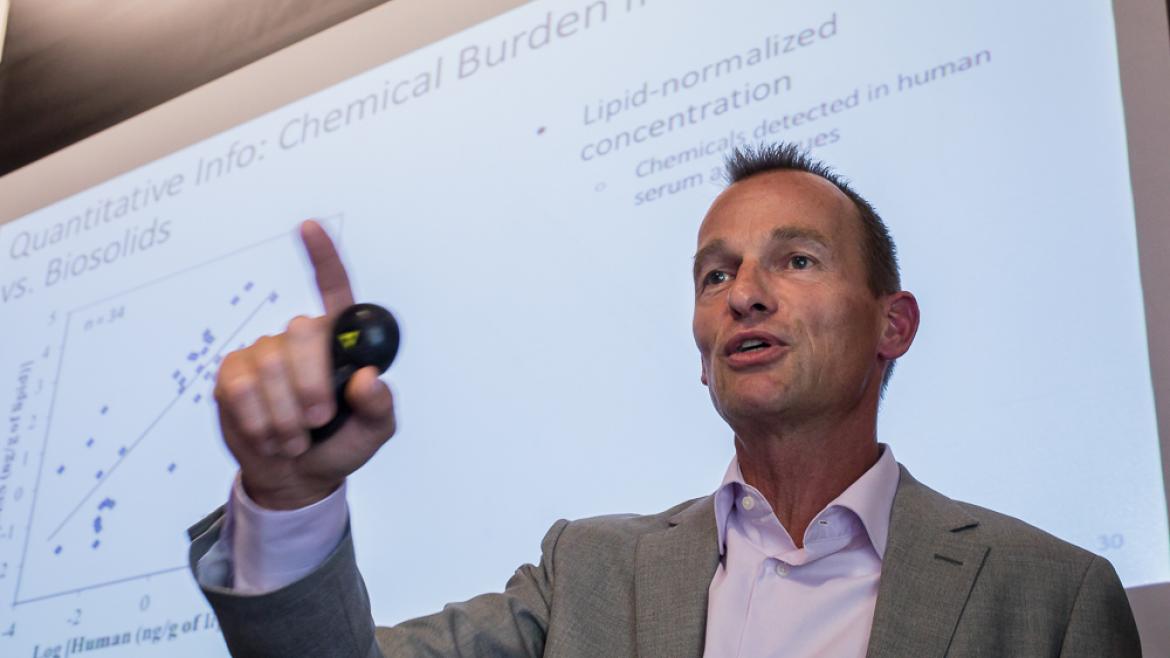 It’s not touted on the side of a bus, but Arizona State University is full of it.

The university is home to the National Sewage Sludge Repository. Collected from 200 wastewater treatment plants, representing 10 percent of the U.S. population, it’s the largest archive of its kind in the country.

Row upon row of white freezers are packed with (at last count) more than 1,000 jars of sewage sludge in the Human Health Observatory lab. To most people, it’s a big pile of poo. To Rolf Halden, it’s a window into public health and habits.

The director of the Biodesign Center for Environmental Security, HaldenProfessor, Ira A. Fulton Schools of Engineering, School of Sustainable Engineering and the Built Environment; senior sustainability scientist, Julie Ann Wrigley Global Institute of Sustainability. lectured Wednesday about his work with the archive.

“We use them as observatories,” Halden said. “We use it to look at the toxic history.”

Sewage sludge analysis is a diagnostic tool, which reveals chemical regulation (or the lack thereof).

Flame retardants, antimicrobial soaps, bath salts and opioids all turn up in sewage.

“We don’t know who created the cocaine spike over the weekend, but we can measure it,” Halden said. “There’s a lot we can learn about studying wastewater.”

He said this sort of research could become more prevalent for its potential to point out public health concerns — if, for example, wastewater sludge shows a high concentrations of opioids, researchers could alert authorities to a previously undetected drug problem.

And since projections show that by 2050, two-thirds of the projected world population of 9.6 billion people will live in cities, the ability to diagnose human activities, consumption and health in urban cities will be key to understanding and managing human health and planetary sustainability.

Modern products exude debris that literally has nowhere to go.

“Earth is a big bubble,” Halden said. “Eventually, everything comes back to us.”

As an example of visible chemical pollution, Halden cited the five gyresA gyre in oceanography is any large system of circulating ocean currents, particularly those involved with large wind movements. Source: Wikipedia in the world’s oceans where plastic trash accumulates in Texas-sized agglomerations.

“This is one of the few pollutions we can see,” he said.

However, most chemical pollution is invisible.

“Pollution is present everywhere — including in you,” said Halden, who described it as “a chemical legacy.”

When a baby is born, it automatically carries a “toxic backpack” from everything the mother has ingested, sprayed on, rubbed on and inhaled in her life. A baby’s first meal is loaded with chemicals.

“This stuff doesn’t go away,” Halden said. “This is the chemistry we do today.”

Cities are a great place to study what people do, because everything is there. Cities can be studied as large living organisms. Urban metabolism dates to the 1960s.

The ASU Human Health Observatory analyzes what comes in to wastewater treatment plants and what goes out.

“We see the pollution being emitted, and we know it will be around forever,” Halden said. “We are a part of nature.”

The lecture was part of the Ethics @Noon series, hosted by the ASU Lincoln Center for Applied Ethics.

Top photo: Professor Rolf Halden, director of the Center for Environmental Security at the Biodesign Institute, talks about the research he's doing on non-degradable toxins that reside for generations in humans' fat layers, during a Wednesday lecture on Diagnosing the Health of Urban Populations. His findings are based on mass spectrometer findings on human waste from ASU's National Sewage Sludge Repository, with samples taken from across the country. Photo by Charlie Leight/ASU Now

Research examining the role that private governance can play in bypassing government gridlock on climate change has earned a pair of Vanderbilt University professors this year’s $10,000 Morrison Prize, which recognizes the most impactful sustainability-related legal academic article published in North America during the previous year.Michael P. Vandenbergh and Jonathan Gilligan’s winning paper...

Research examining the role that private governance can play in bypassing government gridlock on climate change has earned a pair of Vanderbilt University professors this year’s $10,000 Morrison Prize, which recognizes the most impactful sustainability-related legal academic article published in North America during the previous year.

Michael P. Vandenbergh and Jonathan Gilligan’s winning paper, "Beyond Gridlock," was published in the Columbia Journal of Environmental Law and will be presented at the Third Annual Sustainability Conference of American Legal Educators in May at the Sandra Day O’Connor College of Law at Arizona State University.

According to Vandenbergh and Gilligan, their winning article “demonstrates how a private governance wedge of emissions reductions can be achieved by expanding current corporate and household private governance initiatives and by launching new initiatives that address climate beliefs, motivations, and behavior.”

"'Beyond Gridlock' is the culmination of about ten years of work together in which we have sought to call greater attention to the obstacles to government action on climate change at the national and international scales, and to the largely neglected potential of actions by the private sector — businesses, other private organizations, and private citizens — to reduce greenhouse gas emissions even when governments fail to act," Vandenbergh said.

Gilligan added, "After last fall's election, we face the prospect that the U.S. federal government will withdraw from most efforts to address climate change. We believe that 'Beyond Gridlock' is more important than ever and we are very grateful for the Morrison Prize for recognizing this work and calling attention to it at this moment."

The Morrison Prize is administered through the Program on Law and Sustainability at the Sandra Day O’Connor College of Law at Arizona State University. It is named after its funder, Richard N. Morrison, co-founder of the Morrison Institute for Public Policy at ASU.

“ASU’s Program on Law and Sustainability is extremely fortunate that Richard Morrison has agreed to make this contest possible through his generous support,” said Troy Rule, faculty director of ASU Law’s Program of Law and Sustainability. “The Morrison Prize is drawing increased attention to sustainability-oriented legal academic research throughout the United States. This research plays a valuable role as federal, state, and local policymakers seek to integrate new sustainability technologies into their economies.”

The Morrison Prize is open to full-time law professors who have published environmental sustainability-related papers in printed U.S. or Canadian legal academic journals during the contest period. All eligible papers entered into the prize contest undergo independent review and scoring by a diverse group of full-time law professors who teach in environmental sustainability-related areas at four different accredited North American law schools.

Vandenbergh and Gilligan will collect their prize winnings at ASU’s Sustainability Conference on May 12, which will feature presentations by 50 law professors from throughout North America on their current academic legal research related to environmental sustainability.

“In three short years, the Sustainability Conference has emerged as an important contributing force on the legal and policy fronts of the environmental sustainability movement. Our selection process for presenting at the conference has become more competitive each year, and this increasing competition has elevated the quality of the conference content and the selectivity of our presenter list.  We couldn’t be more proud of what this conference has already become,” Rule said.