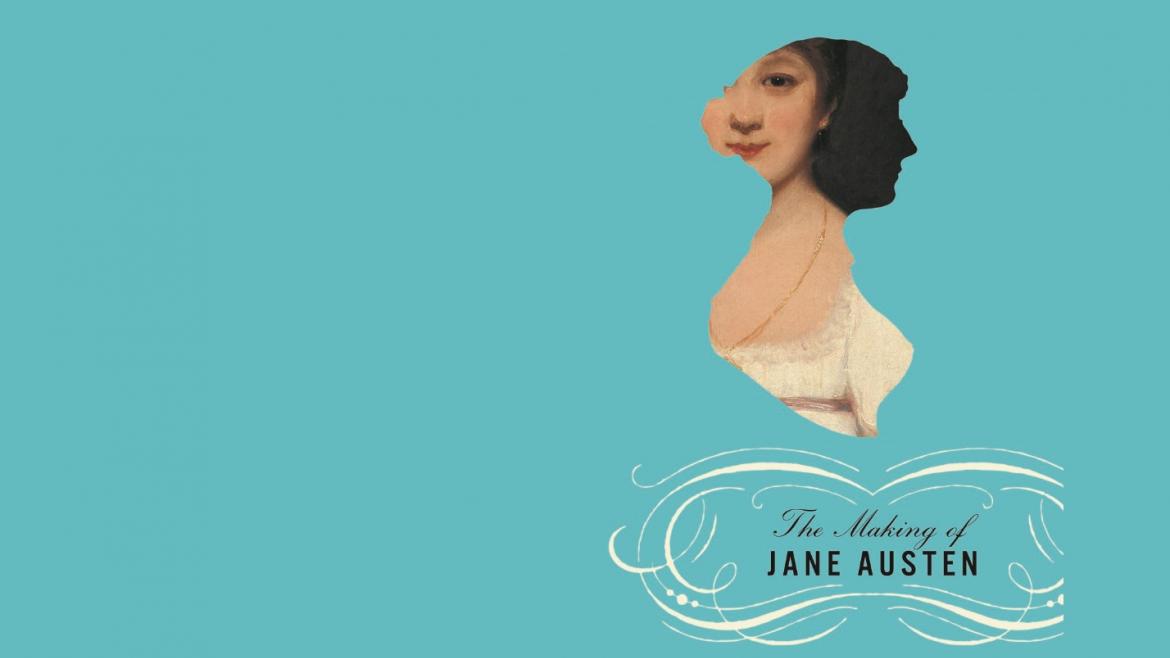 English professor Devoney Looser presents 5 things to know about the acclaimed author, based on new research 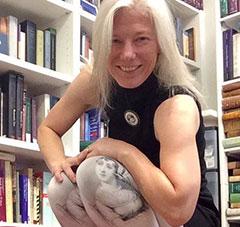 Sometimes artists receive critical acclaim during their lifetimes, but don’t achieve fame until after their death.

This was the case for Jane Austen, and it’s the subject of ASU English professor Devoney Looser’s latest book, “The Making of Jane Austen,” which comes out this summer ahead of the 200th anniversary of the British novelist’s death.

Publisher’s Weekly has named the book a top 10 pick in Essays and Literary Criticism for spring 2017.

“Oftentimes, when we look at a literary figure, we don’t necessarily trace what happened to them from the years of their death to the present,” Looser said. “What my book sets out to show are the ways that popular culture has been influential in our making of her as a posthumous figure, as someone with an afterlife.”

A self-proclaimed “Jane Austen weirdo,” Looser has structured whole parts of her life — teaching, scholarship, leisure — around the early 19th century author. Still, there were things she discovered during the writing process that surprised even her.

Here, she shares five things to know about Austen, her work and her role as an icon.

1. Jane Austen was popular long before we imagined her being popular. 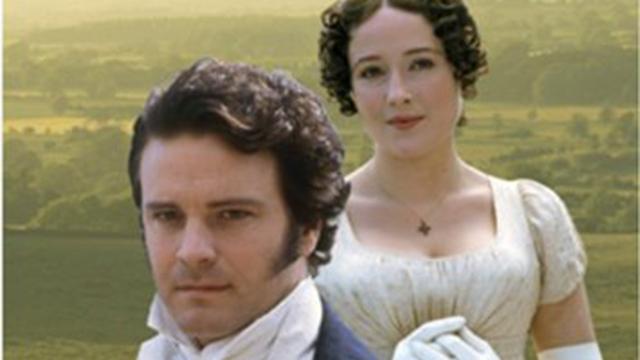 Many attribute Austen’s current en vogue status to an explosion in popularity following the widely praised 1995 film adaptation of “Pride and Prejudice” starring Colin Firth. Looser sets the record straight, noting that Austen received her first Hollywood treatment in 1940 when Laurence Olivier brought the role of Mr. Darcy to the silver screen opposite Greer Garson, who gave an unfortunate performance of Elizabeth Bennet as a “flibbertigibbet flirt.”

There were several other attempts at translating the classic novel into film, including ones that re-imagined it as a Western, a screwball comedy and a musical — all without success.

Before that, Austen had been invoked for political causes as early as 1908, when her name was emblazoned on banners held by suffragettes marching through the streets of London.

2. There’s some debate as to what garnered Austen fame in the first place: critical acclaim or popular readership. 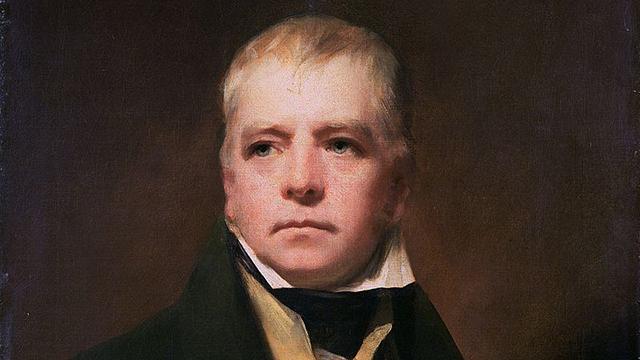 Sir Walter Scott, considered the greatest novelist of the 19th century, gave a positive review of the novel “Emma” during Austen’s lifetime, though the critique was unsigned.

He also acknowledged in his journals that he believed she was more skilled in some areas than himself. After Scott’s 1832 death, his journals were discovered and so was his opinion of Austen. Because of his stature, the public took note.

And there were other well-respected writers who also praised her talent. However, Looser said, “There are some sources from the 1830’s … saying it was readers who discovered Jane Austen, and critics picked up on it after the fact.

“I think there could be an argument made in both directions, but obviously the popular readership is what kept her going and, I think, moved her into each new popular media as it emerged. It wasn’t critics who did that.”

3. The idea of Austen as a feminist icon goes way back. 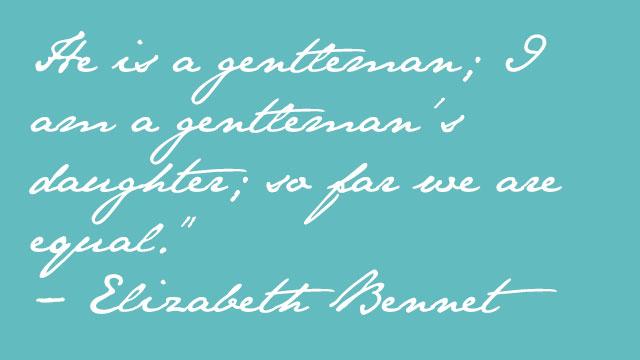 Some of the first performances of her work were young women performing Elizabeth BennetThe lead character in Jane Austen's "Pride and Prejudice." monologues in their drawing rooms, which Looser said helped spur the beginning of a movement toward women’s rights.

In 1909, Austen was included as a character in Cicely Hamilton’s women's suffrage play “A Pageant of Great Women,” at a time when some people were interpreting Austen’s work as “safe and conservative and morally unchallenging.”

“There were certainly people using her work then to say women should go back to the home, that they should be satisfied with their lot in life, which is to be a mother and a daughter,” Looser said. “But at the same, time, all these feminists were saying Jane Austen is a genius writer; Jane Austen gives us characters who show that women are rational creatures. … That’s fascinating, that women learned to refuse traditional edicts about how to live their lives using an early 19th century author.” 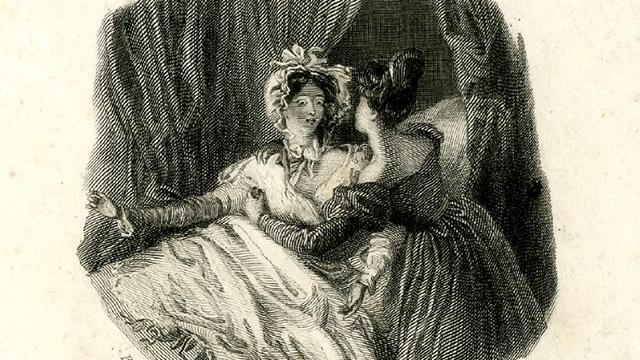 Ferdinand Pickering was the first to illustrate Austen’s novels in 1833 when they were repackaged as a set.

As an illustrator, Pickering’s style was more gothic, often depicting characters in wide-eyed, sensationalized moments of female intimacy, as in “Sense and Sensibility,” when Marianne falls ill with a fever and is comforted by her sister Elinor.

Looser suspects Pickering’s penchant for depicting those kind of moments had to do with his somewhat tragic and volatile childhood and family relations.

“His choice to pick out the moments of family drama in Austen are really interesting, and I think shaped readers sense of her books as being more about women and female relationships,” she said.

Pickering also depicted the novels’ characters in 1830s dress, the era during which he created the illustrations, even though they had been written in the 1810s.

“I think it’s one of the reasons,” Looser said, “that people start to mistake Jane Austen as a Victorian novelist.”

5. She didn’t write in secret. 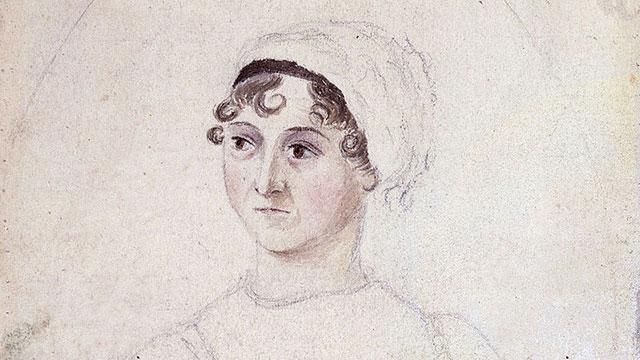 There’s a long-held myth that Jane Austen hid her writing and wrote in secret. It began with the first memoir of Austen’s, written and published by her nephew, James Edward Austen-Leigh. In his account, he fictionalized aspects of Austen’s life – the manner in which she wrote being one of them – which he was unable to witness because of his young age at the time of her death.

“He’s saying, ‘I can’t remember my aunt writing, so she must have been hiding it,’” Looser said, “but it was clear that at the time the story was first told that he was writing fiction, that he was fantasizing.”

Unfortunately, that was lost on many and the notion was passed down through history as fact.

“It’s been spun out and repeated over and over as if it’s fact … but if you look at the original source, it does not appear to be the conclusion we should come away with,” Looser said.

“That’s one of the things that I hope my book does; takes us back to some sources we haven’t scrutinized at all, that we’ve assumed were fact, and says, ‘Let’s look at how these were positioned, how these stories got repeated, where these myths came from.’”

The Downtown Phoenix campus started off this year's Night of the Open Door — five free open houses over the month of February — on Friday, welcoming crowds of visitors enjoying the mild weather and the chance to peek into Arizona State University's learning spaces. Video of NOD Downtown Phoenix Families watched health-cooking demos, explored a coral reef, learned about law and sustainabilit... 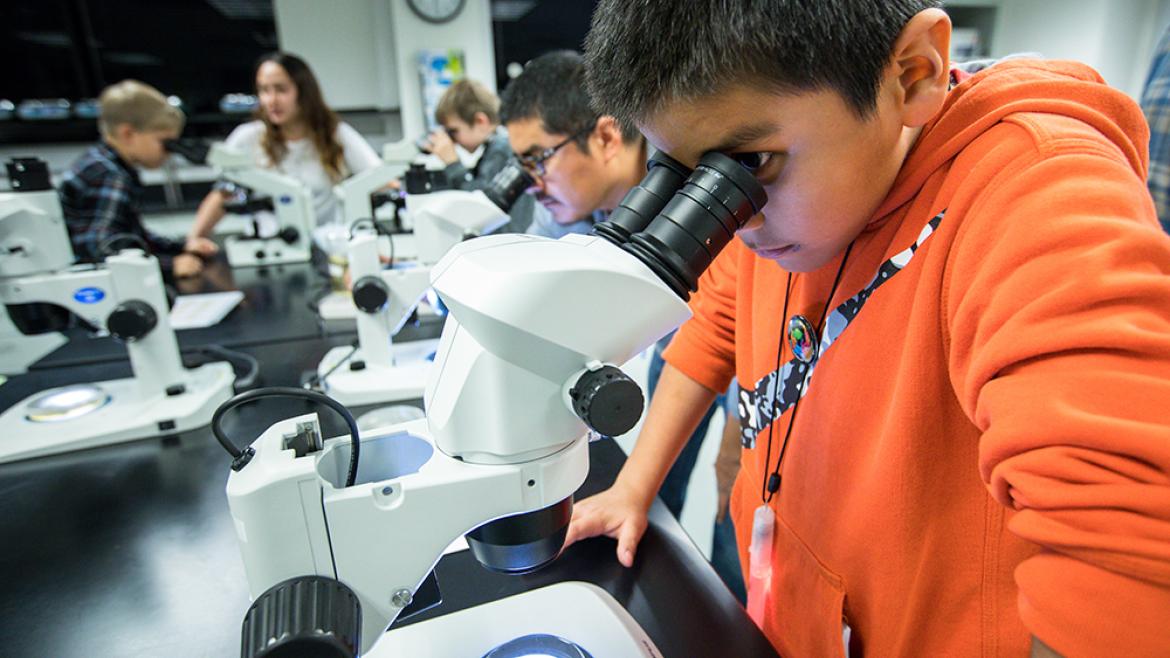 The Downtown Phoenix campus started off this year's Night of the Open Door — five free open houses over the month of February — on Friday, welcoming crowds of visitors enjoying the mild weather and the chance to peek into Arizona State University's learning spaces.

Families watched health-cooking demos, explored a coral reef, learned about law and sustainability and the physics of roller coasters, and even got a chance to interview a K-9 officer about his work with his four-legged partner.

This year, downtown visitors got a double treat, as the Walter Cronkite School of Journalism and Mass Communication held its annual Innovation Day in conjunction with Night of the Open Door. There, the storytelling technology of the future was available for participants to try out, from telepresence robots to drones to 360 virtual reality video.

If you missed the fun, don't worry: There are four more free Night of the Open Door events this month: 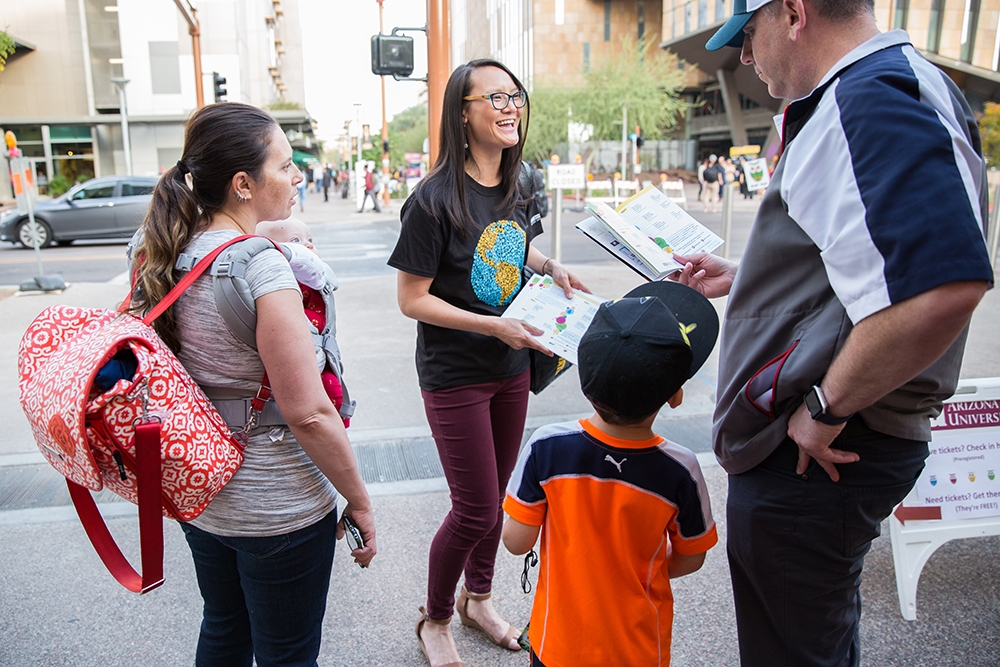 Jessica Cheng, a volunteer with the Global Institute of Sustainability, welcomes families to the Downtown Phoenix campus Night of the Open Door celebration Friday. Cheng graduated from ASU in 2004 and currently works as a fundraiser. 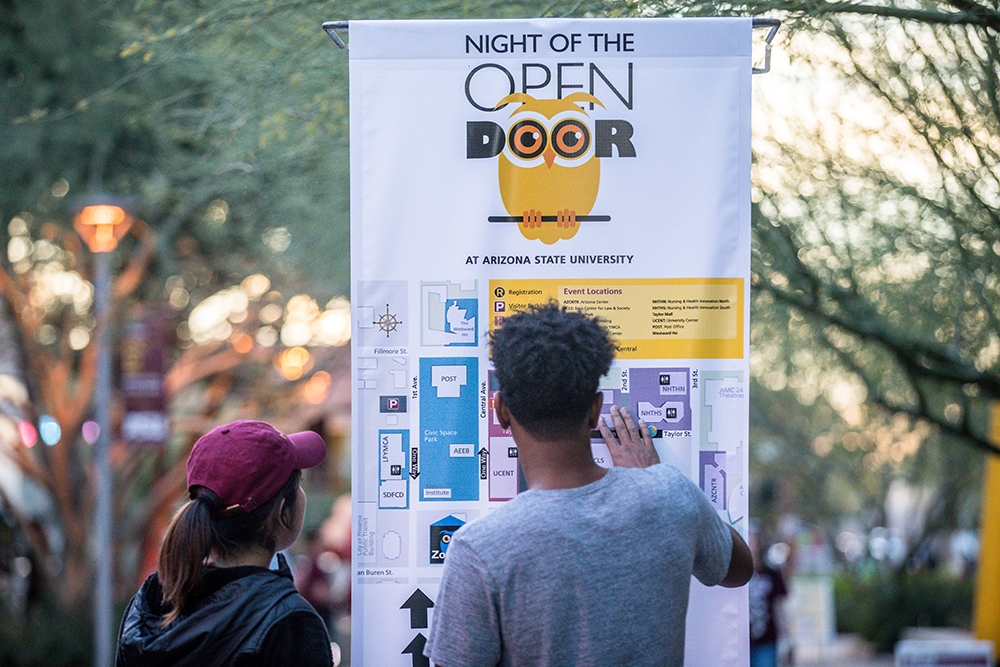 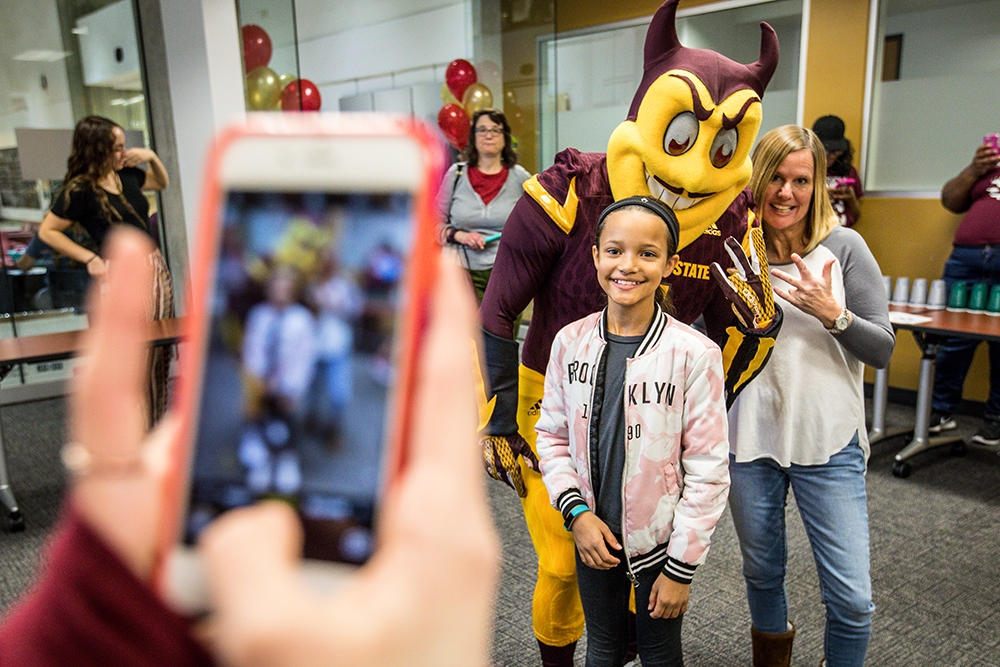 Sparky poses with 10-year-old Naysa Roquemore and her mother, ASU alumna Wendy Johnson, on Friday. The family was in the Barrett, the Honors College center's You Have a Minute to Win It! 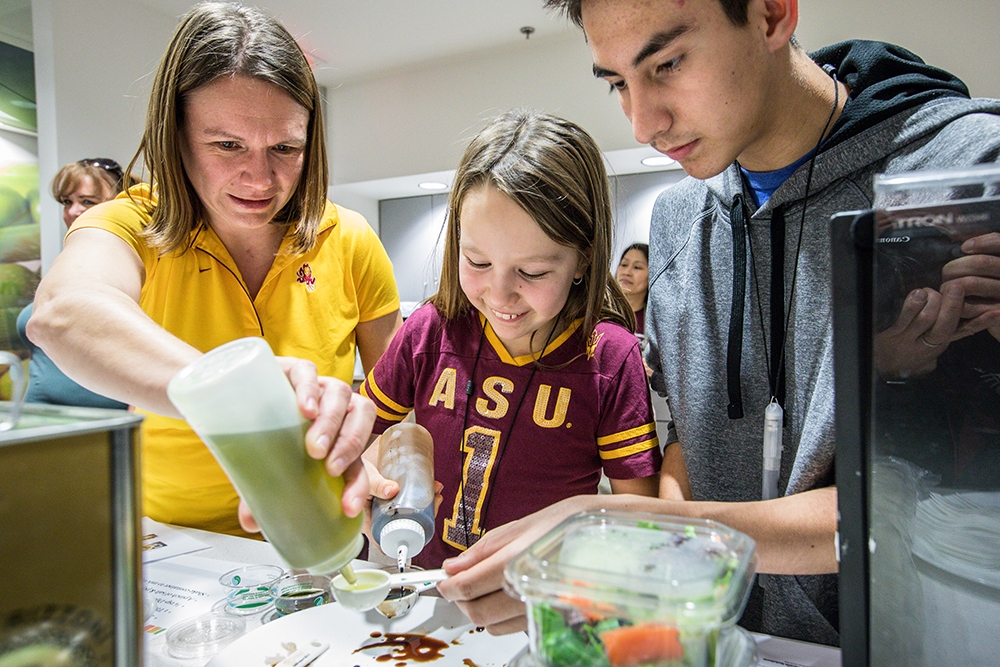 Jana Reisslein (left), 8-year-old Kate Reisslein and friend Cesar Rebollo, 14, make balsamic vinaigrette for their salads. The group learned about the ingredients' health benefits as part of the Kitchen Demonstrations by the College of Health Solutions Dean's Office. Seven-year-old Christian Tso, of Ahwatukee, adjusts a slide of pool water under the microscope, as his 5-year-old brother, Samson, looks on. Christian brought his family to Microbes: The Good, the Bad and the Ugly demonstration because of his interest in science. The exhibit was part of the College of Integrative Sciences and Arts' program. 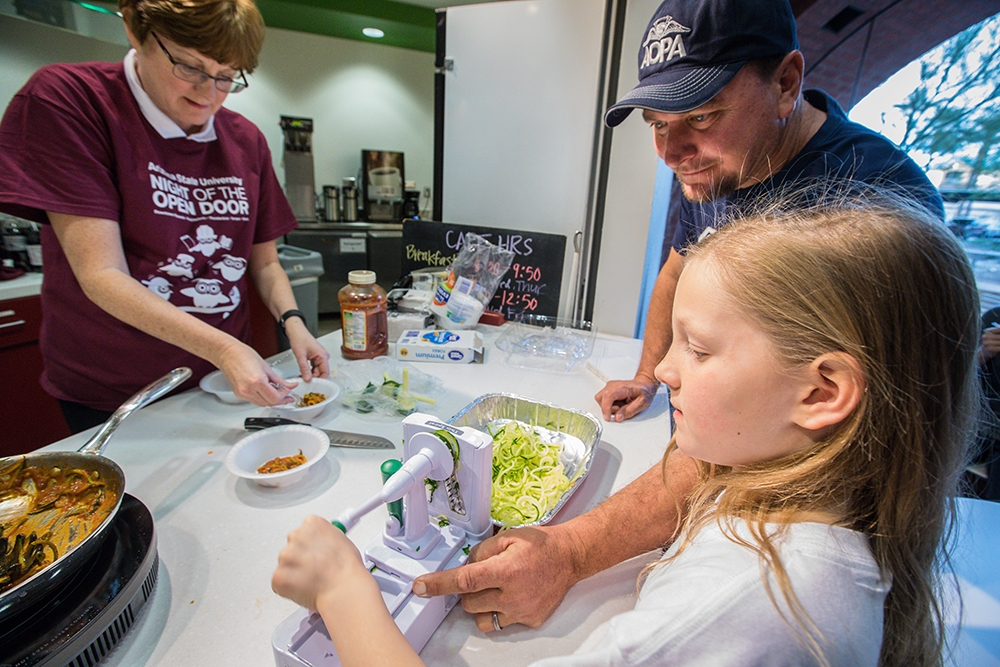 Nine-year-old Miley Rhames grinds a zucchini noodle with her father, Curtis Rhames, as they learn about nutrition in The Art of Veggie Noodles activity. Kathy Dixon, a faculty member in nutrition, dishes up samples of the finished meal. The Rhames, from Farmington, New Mexico, are in town for Miley's gymnastic competition. 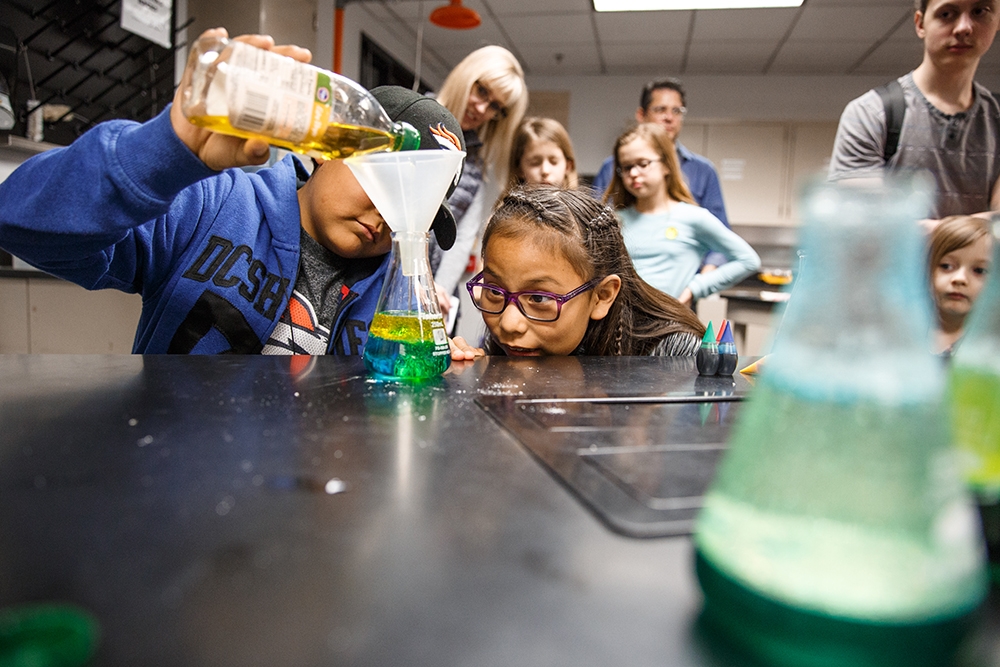 Eleven-year-old Sam Martin (left) and 9-year-old Shelby Martin carry out a science experiment that examines the various densities of water and oil. Instructional aid Karen Norris points out who's hiding in the coral reef to 8-year-old Aleska Roberts. Aleska is very interested in animals, and Norris plans to continue her graduate education in animal conservation through genetics. The exhibit was part of the College of Integrative Sciences and Arts' program. 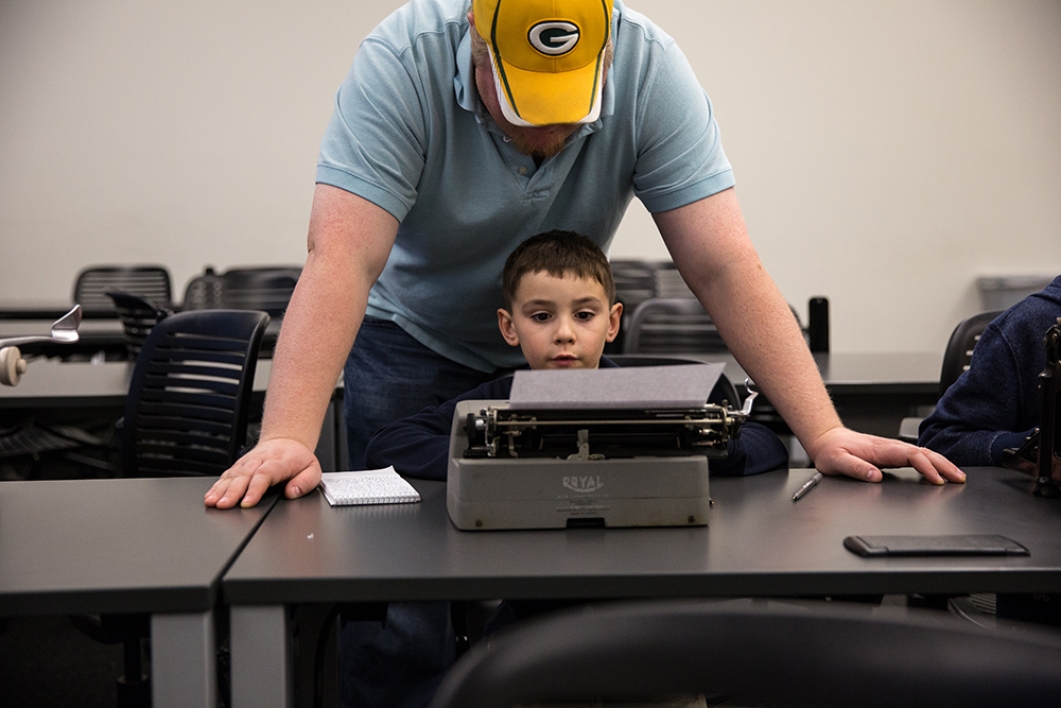 Aiden Newberg, 6, types with his father, Brian, at an ASU Now-sponsored event where participants learn how to interview ASU experts and type up their stories on deadline. 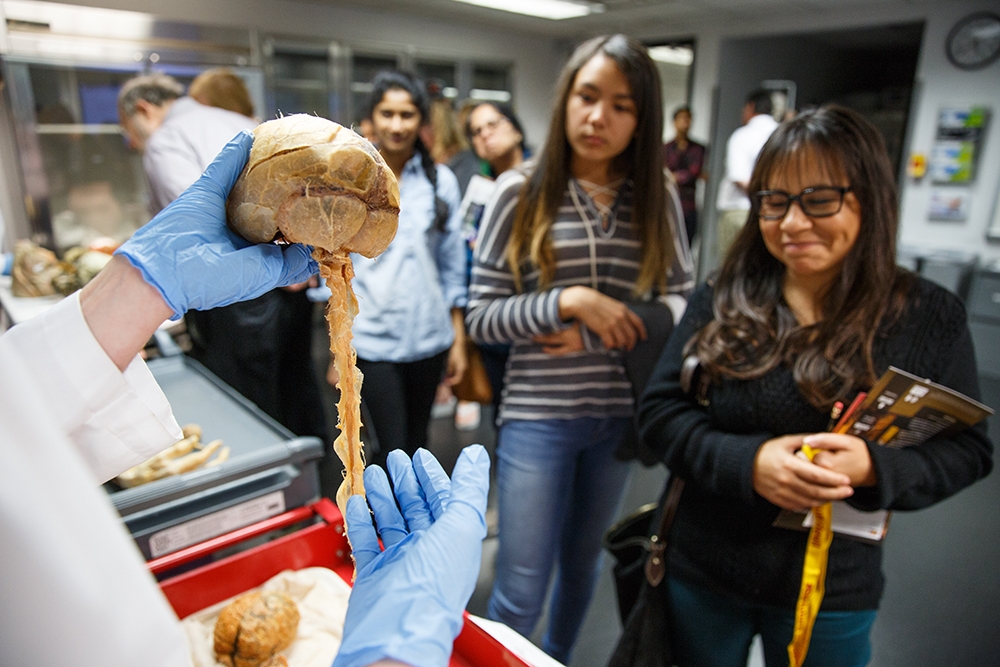 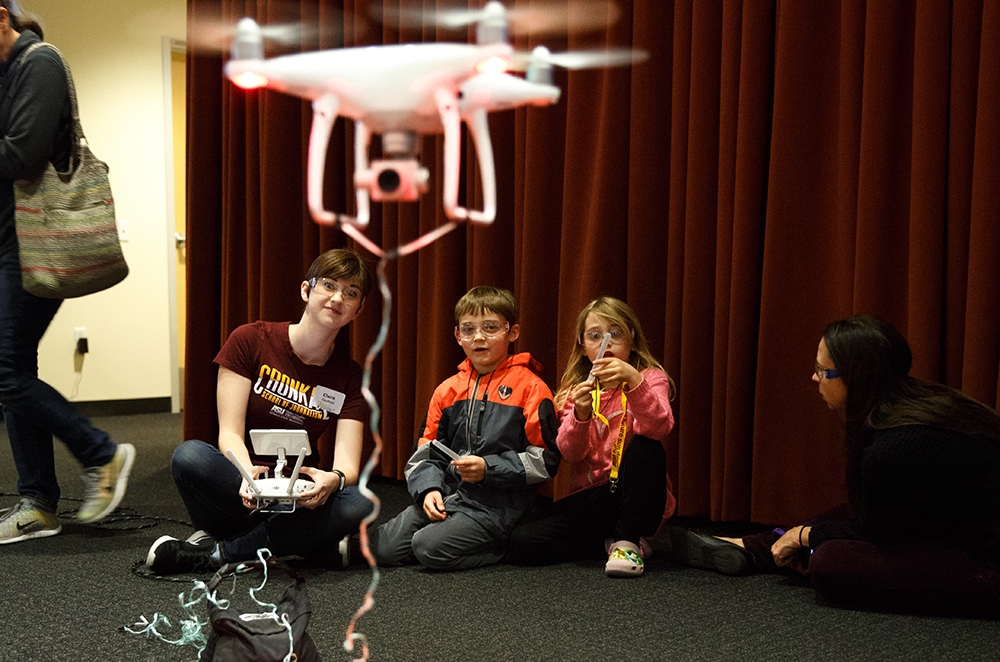 Bowman and Eden Hartsfield, both 7, learn how to control camera drones on the second floor of the Cronkite School building. Their mother, Courtney Hartsfield, teaches at the ASU Preparatory Academy in Phoenix. Kids and their parents watch as "elephant toothpaste" foam flows. The chemistry experiment, which used hydrogen peroxide, dish soap and potassium iodide, was performed by the College of Integrative Sciences and Arts. Spencer Dreisezun, 10, tries out a virtual reality interaction game set in the human cell during Innovation Day at the Walter Cronkite School of Journalism and Mass Communication on ASU's Downtown Phoenix campus Friday. 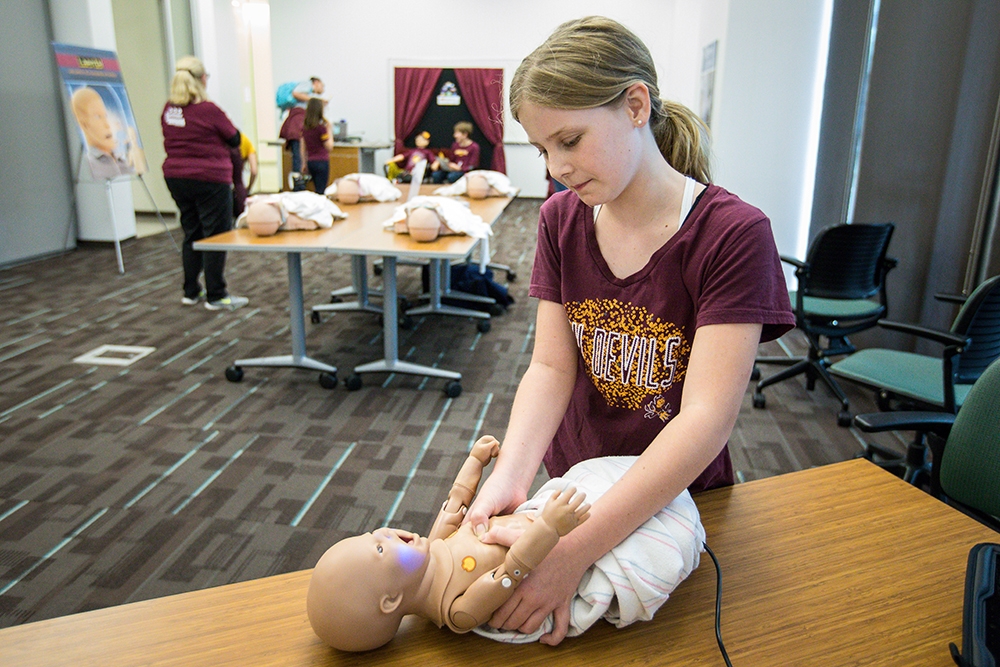 Eleven-year-old Hailey Maupin does chest compressions on a sim baby mannequin. The Simulation Experience gave people the opportunity to react to critical emergencies, as part of an exhibit sponsored by the College of Nursing and Health Innovation. 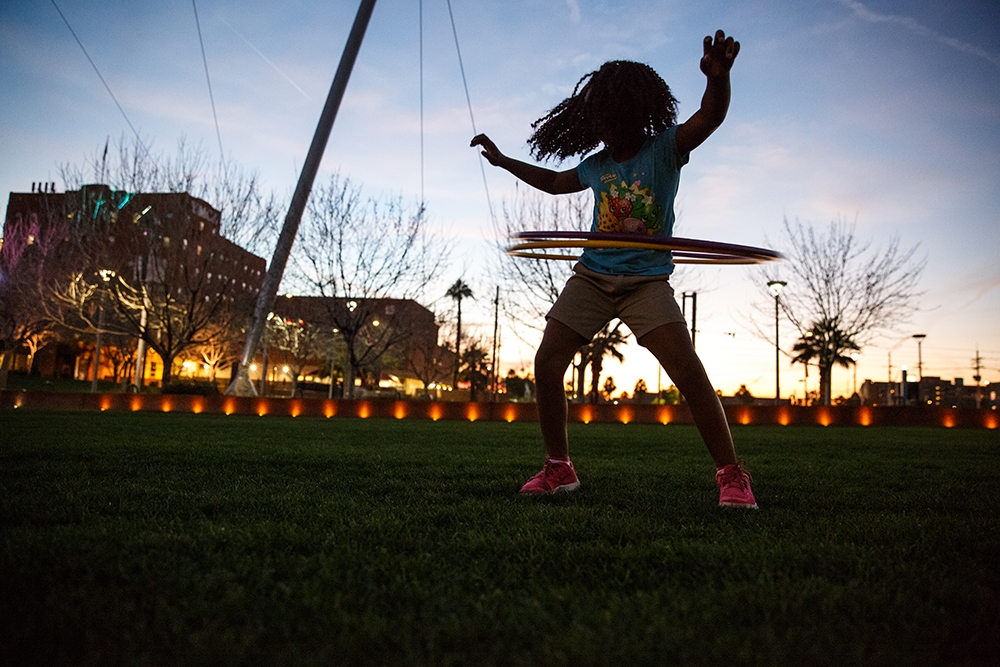 Christyn Gibbs, 6, plays lawn games in front of the downtown Phoenix post office as part of ASU's Night of the Open Door celebration. Christyn's father, Marques, is an ASU Cronkite School graduate who works as a writer.

Read more about what's in store at each campus here, including information on the free app that can help visitors map out the activities they want to visit.

Check ASU Now after each event for photo galleries and video, and follow along as our crew shows all the fun on Snapchat (search for username: ASUNow).

Top photo: Seven-year-old Christian Tso, of Ahwatukee, looks at live organisms under the microscope at the Downtown Phoenix campus, Friday, Feb. 3. He brought his family to Microbes: The Good, the Bad and the Ugly demonstration because of his interest in science. The exhibit was part of the College of Integrative Sciences and Arts program. Photo by Charlie Leight/ASU Now