Arizona State University student Isabella Jaber shows that learning a language doesn’t just help get you a job, but can elevate your role in a workplace and help you achieve a number of goals.

Jaber, a student in the School of International Letters and Cultures (SILC), works at American Express as a business Centurion relations manager, where she manages, “a direct portfolio of about 40 to 60 of the company’s most valued clients." 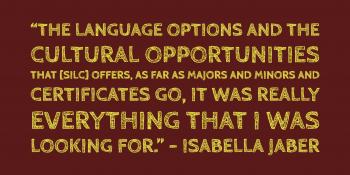 "Within that, I do personal, business travel – I do any type of concierge’s request and all of their financial servicing with the company,” Jaber said.

While a huge responsibility, Jaber has used her skills in business and language to not only support her clients, but also her coworkers at American Express. As the only bilingual person in her department, her Spanish language skills have allowed her to translate for clients in Peru, Mexico, Chile and Spain.

“The travel and international presence that’s done in our work on a daily basis, [being bilingual] has really come in handy with that,” Jaber said. “Spanish has been an everyday part of my role since I started.”

Jaber, who is half Hispanic and half Lebanese, also speaks Arabic, which she has used more to relate to clients who are multilingual themselves. She also used Spanish and Arabic at her previous job with Bank of America.

While she grew up speaking Spanish, Jaber saw the benefit of studying it in a more formal setting. She learned how to adapt her skills to a professional sphere through a major in Spanish linguistics, also taking classes through the SILC's heritage program. She’ll be graduating this May.

“I knew with my goals of wanting to eventually study global management and work internationally, I wanted to be as proficient in Spanish as I am in English – to have that same level of articulation and proficiency overall,” Jaber said.

“As far as the Arabic goes, I, being half Lebanese, I was never really taught Arabic or anything about the culture. So Arabic studies, that’s what really drove me to SILC, I had this strong passion of wanting to learn more about that world and speak the language too, have that ability to communicate,” Jaber said.

Jaber appreciates having language skills in her personal life as well: “on a day to day basis, it has really opened my mind to how I communicate with people.”

“I do love to travel a lot,” she said, “it’s that much more motivating because I know I can go out there into the cities and learn about the culture, what it has to offer. That’s my passion, learning other cultures and traveling the world.”

ASU’s Night of the Open Door powered by STEAM innovation

Searching for new ideas and unique experiences with the family in 2017? Does your New Year’s resolution include medieval knights and chain mail, international culture, new-age cars, space exploration or Teotihuacan pyramids? What about discovering the newest career fields or meeting the brainiacs heading labs at the No. 1 most innovative university in the country?Arizona State University hosts t... 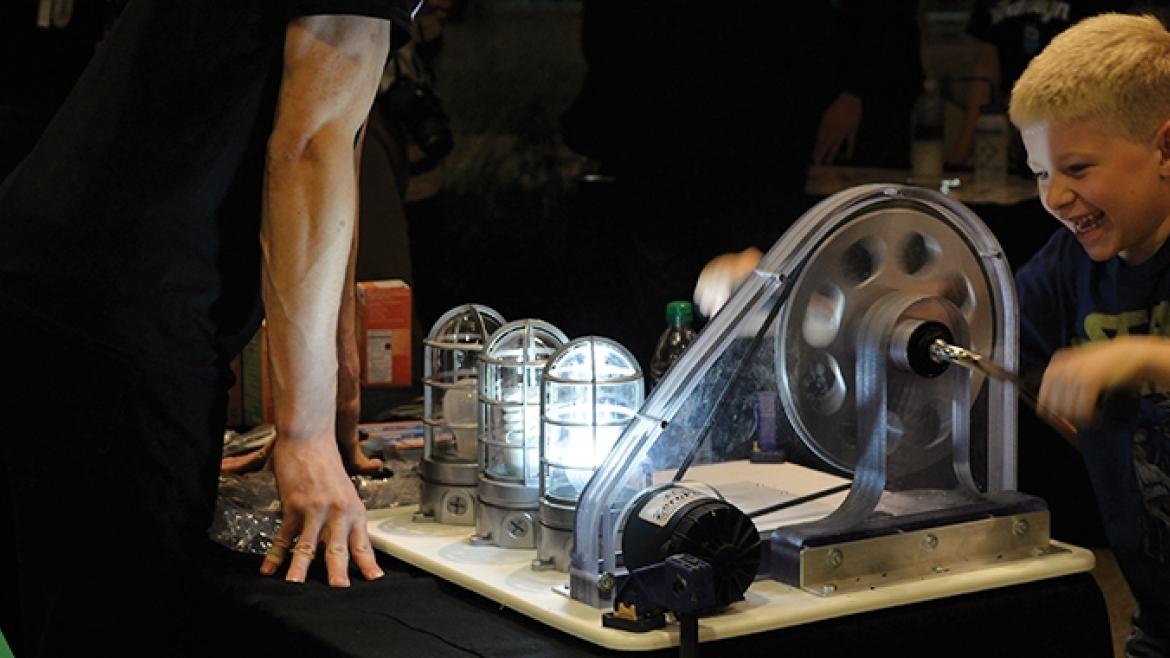 ASU’s Night of the Open Door powered by STEAM innovation

Bring the family and 'nerd out' with hundreds of hands-on experiences, performances, tours and more on five Valley campuses

Searching for new ideas and unique experiences with the family in 2017? Does your New Year’s resolution include medieval knights and chain mail, international culture, new-age cars, space exploration or Teotihuacan pyramids? What about discovering the newest career fields or meeting the brainiacs heading labs at the No. 1 most innovative university in the country?

Arizona State University hosts the Night of the Open Door on its five campuses across metro Phoenix. Each offers adults and children the opportunity to “nerd out” and celebrate the power of STEAM (science, technology, engineering, arts and math) with more than 360 hands-on experiences, tours, performances, creative activities, demos, games and design challenges.

With so many activities to consider, Night of the Open Door also offers an app through Devils on Campus (Android or iOS) to help visitors choose activities in advance and navigate each campus. Follow us on Twitter and Facebook for highlights of upcoming events.

In its sixth year, Night of the Open Door is a top signature event of the Arizona SciTech Festival. Each campus offers performances and activities tailored to its own unique character. For example, chart an evening at Downtown Phoenix to experience cooking and health demonstrations, Native painting activities and community arts exhibits. Come tour PBS studios, meet ASU Public Service Academy students or compete in sustainability, law and health learning games. Kids can even get their junior reporter press badge working with veteran journalists and vintage typewriters.

At ASU Polytechnic and Thunderbird campuses, imaginations can take flight, literally. The Polytechnic campus is home to robotics and STEAM machines, the Superstition Review Literary Magazine, Sun Devil Racing Development and a professional flight simulator. The ASU Thunderbird School of Global Management adds an international flair with arts and culture from around the world, including movies, sports, dance, festivals and food, from Peru to the Middle East and China. 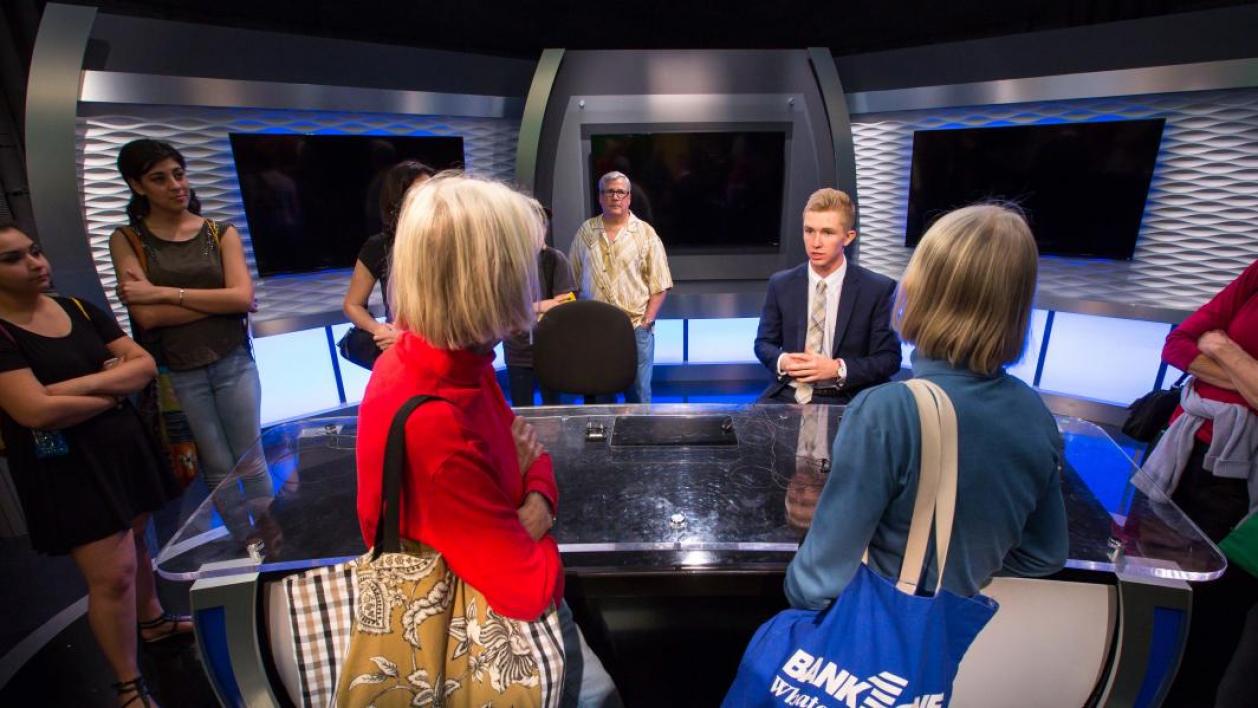 Cronkite anchor Troy Lynch explains the TV set and cameras to a tour group in the Cronkite School and Arizona PBS Tour at the Downtown Phoenix campus. The Night of the Open Door is an open house to be held on that campus Feb. 3 featuring events and interactive activities in mathematics and natural sciences, humanities, arts, social sciences, education and business. 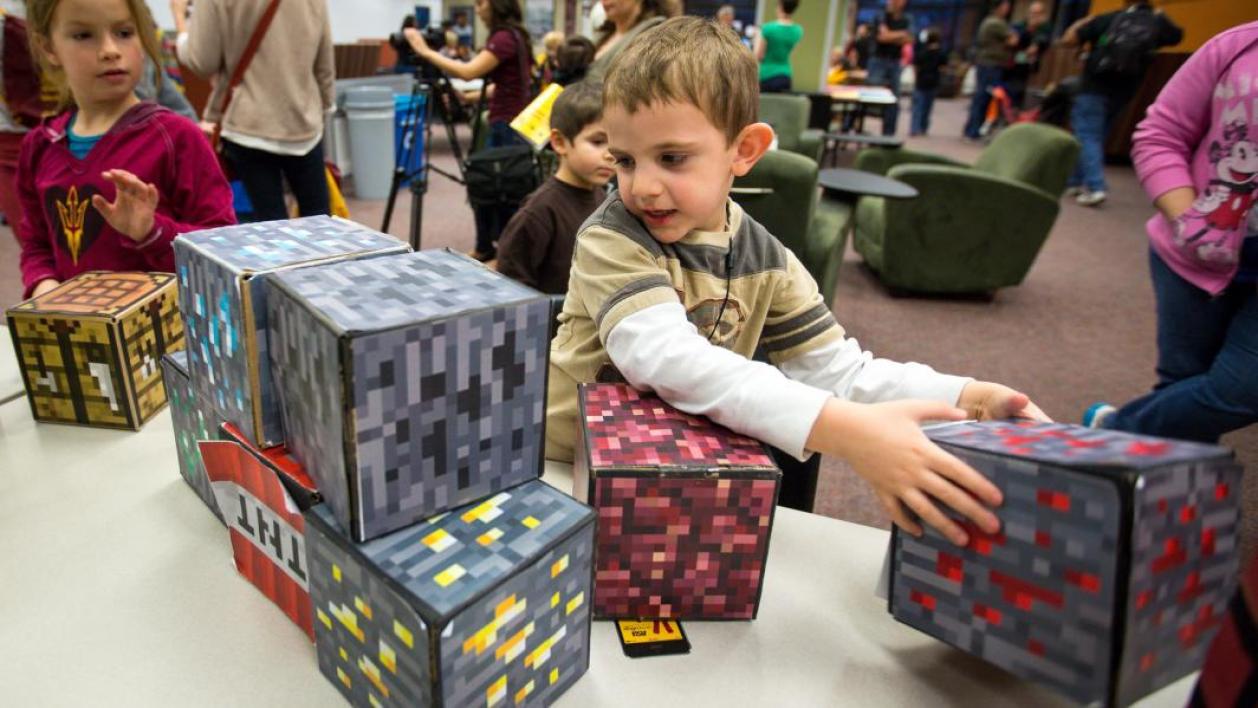 Four-year-old Noah Weisenberg of Mesa plays with Minecraft building blocks on the West campus in Glendale. Night of the Open Door at West is Feb. 11. Activities range from forensics to student research in cancer, aging and drug development, art shows and much more. 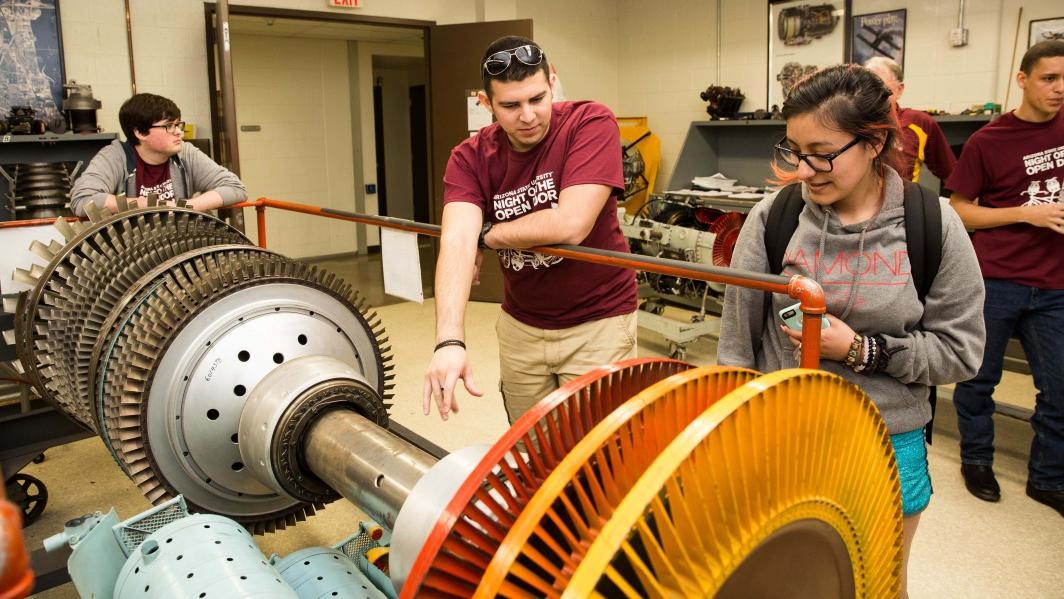 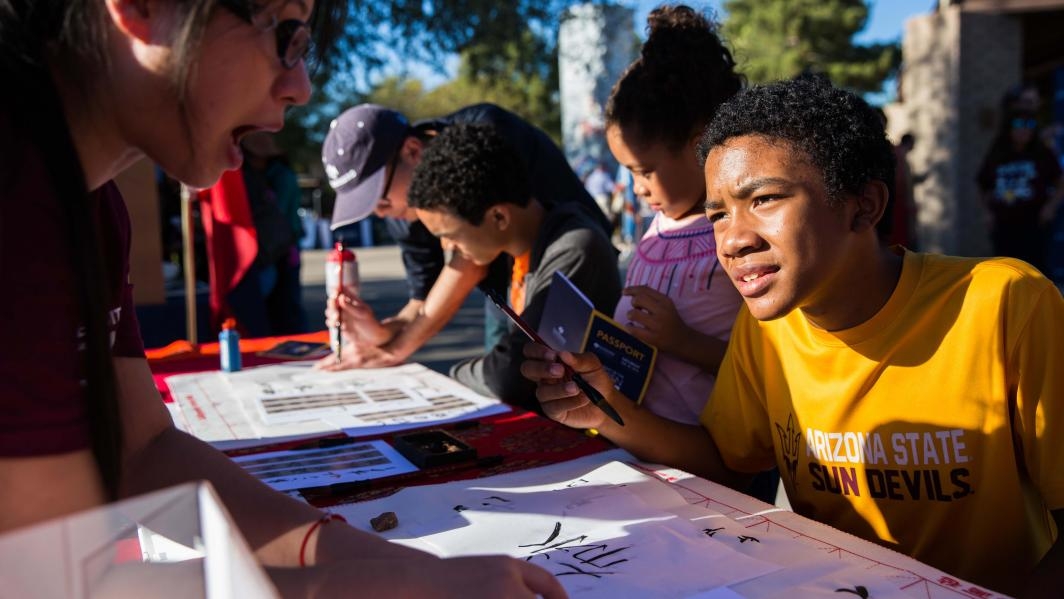 Julian Britt learns how to write Chinese characters at the "Rice Paper Calligraphy" display at last year's Night of the Open Door at Thunderbird. The event will be at that campus Feb. 18 this year. Come experience arts and culture from around the world, including movies, sports, dance, food and the Chinese Spring Festival. 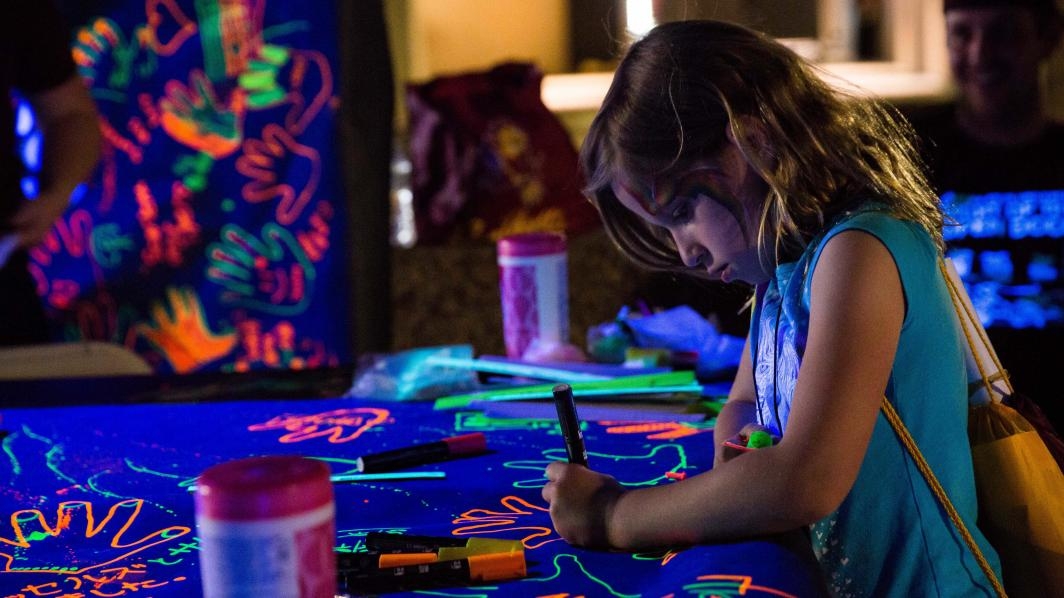 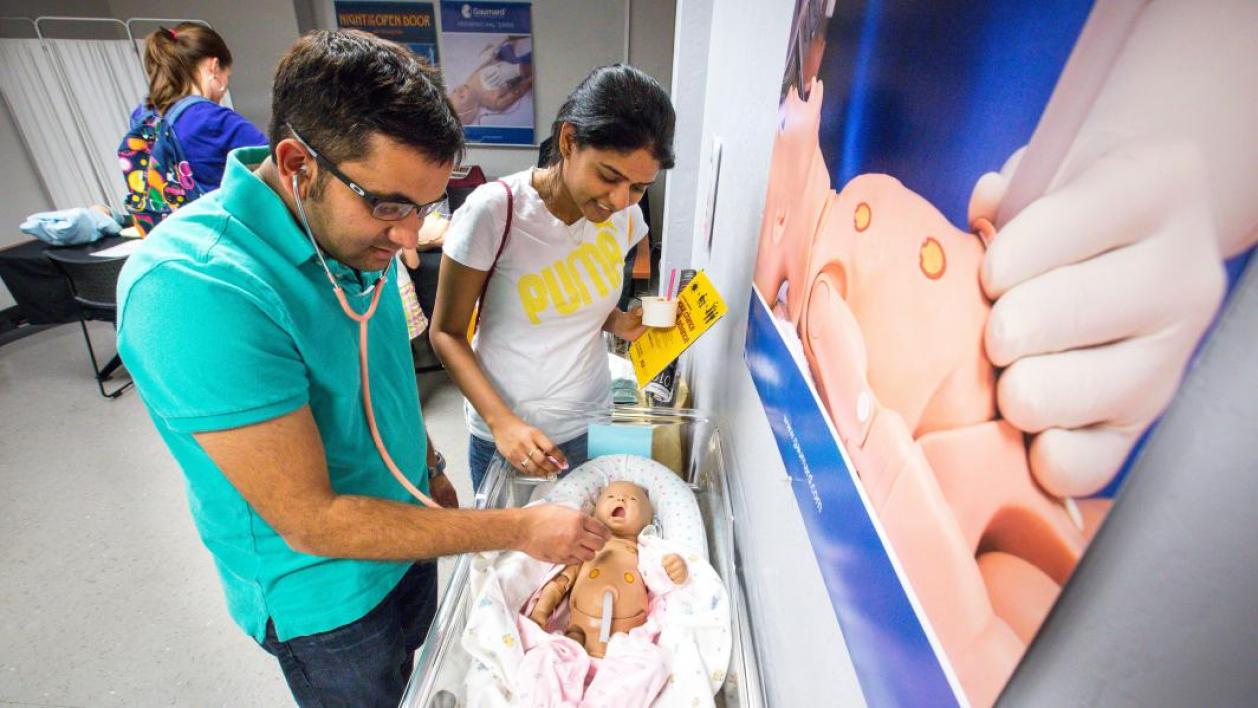 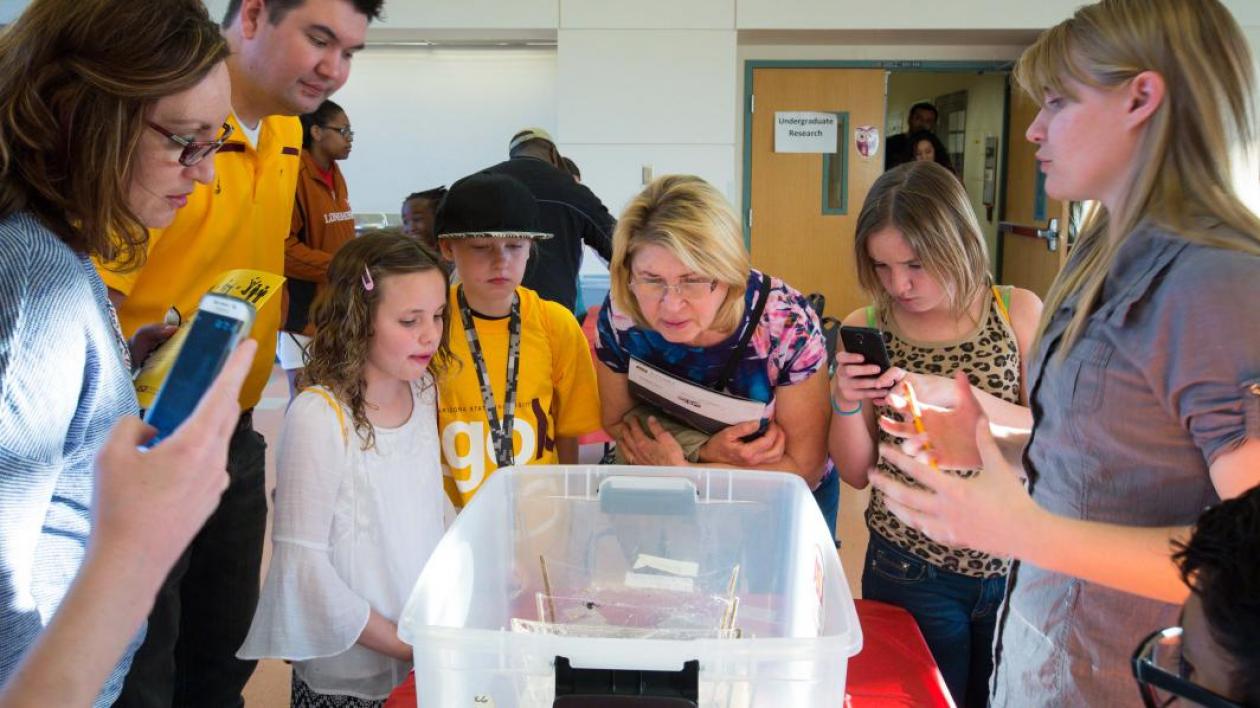 At Night of the Open Door at West campus, displays such as black widow spiders draw in a large web of viewers. The open house features events and interactive activities in mathematics and natural sciences, humanities, arts, social sciences, education and business. At Night of the Open Door on the Polytechnic campus, events range from robotics to humanities and aeronautics. Sophomore automotive engineering major Coleman Cookston shows Logan Clemson the Baja car, one of the many exciting hands-on activities and tours offered by student volunteers. 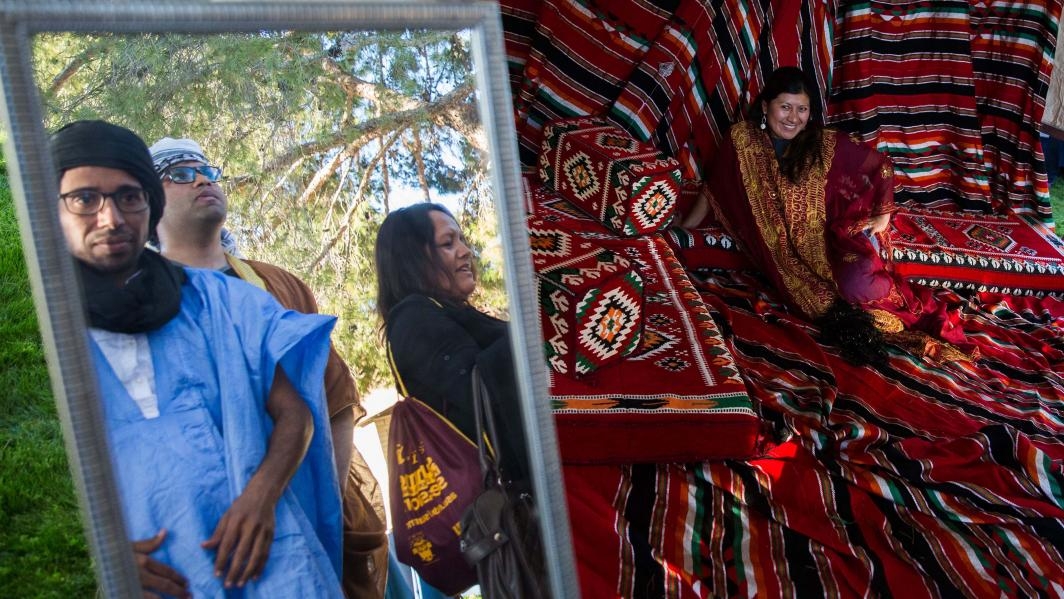 Jessica Gutierrez poses for a photo at the "Experience the Middle East and North Africa" display at last year's Night of the Open Door at Thunderbird. The Thunderbird School of Global Management event offers a global flair with food, displays, demos, dance, games and more. At the Night of the Open Door on the Tempe campus, visitors can roam from the Biodesign Institute to the Institute for Human Origins, where students share their discoveries and research about our early human ancestors.

ASU’s Night of the Open Door winds up on Feb. 25, with more than 150 hands-on arts and sciences activities, lab tours and demos on the Tempe campus, including the ASU Sustainability Solutions Festival (#Sustival) and, new this year, the futuristic arts exposition “Emerge.”

Emerge events bring to life how our creations are changing what it means to be human, exploring the theme of “Frankenstein” in celebration of the upcoming 200th anniversary of Mary Shelley’s classic novel. In addition to Victor Frankenstein’s Workshop for kids, Emerge events for adults are hosted at ASU’s University Club and include artists, virtual reality experiences, neurocomics and immersive environments. Consider the future with “Tomorrow's Monster,” a lab space designed for the year 2047 that features beautifully crafted, customized organs, enhancements and spare body parts. What are the implications of commodification for the future of medicine, artificial intelligence, robotics and what constitutes life itself?

Whether your interests are in language lessons, math or cybersecurity, ancient bones, meteorites or live snakes, Night of the Open Door events have something for everyone, fueled by more than 2,000 undergraduates, graduate students, staff and superstar-faculty volunteers from 150 academic groups.

“Coming to ASU for Night of the Open Door, touring the campuses and meeting the world-class people who teach and do research gives people of all ages and from all walks of life the chance to experience and imagine the future they want,” said ASU staffer Margaret Coulombe.