Former President Jimmy Carter said Friday that the U.S. should be “a champion of peace,” “human rights” and “generosity,” aspirations he said would stem worries over the country’s future.

“We should be the nation on Earth where anyone who has a conflict or potential for military conflict, they should say ‘Why don’t we go to Washington?’ ” he said shortly after accepting the O’Connor Justice Prize, administered by Arizona State University and named for retired Supreme Court Justice Sandra Day O’Connor.

Carter, 92, visited Phoenix to accept the honor for his post-presidency humanitarian work. Through his nonprofit, The Carter Center, he has focused on world peace, democracy and disease prevention. He became the first ex-president to win the honor, which recognizes O’Connor’s legacy and efforts on behalf of judicial independence and human rights.

Previous winners include Ana Palacio, a former foreign affairs minister for Spain who worked to incorporate human rights into the fabric of the European Union, and Navanethem Pillay, a former South African judge who fought apartheid.

About 300 people attended the award ceremony at the Arizona Biltmore Hotel.

Patricia Wald, whom Carter appointed as a federal appeals court judge, presented the award while O’Connor applauded with the audience.

“His achievements out of office is just as impressive as his achievements while in office,” Wald said, adding that his integrity and honesty restored trust in government in the wake of the Watergate scandal.

She also noted his international legacy, saying “he has sincerely earned his title as the ‘human rights president.’”

“Peace, justice and human rights have been the guiding light of our organization from the beginning,” Carter said. He added human rights must be “fair, honest and vigorously pursued.”

Carter said one of his proudest accomplishments in office was appointing more women as federal judges than all previous presidents combined.

At the time, he said, “it wasn’t easy to find women who were qualified for their service in the judicial system, because there were not deans in law schools and not heads of law firms” who were women.

Carter served as president from 1977 to 1981. During his time in office, he established diplomatic relations with China and forged an arms-limitation deal with Russia.

Since then, he has used his Atlanta-based center to eradicate Guinea worm disease and mediate conflicts in the Middle East and North Africa. He also supports human activists by appealing on their behalf to world leaders.

He said the idea for the center was seeded at Camp David in 1978 while negotiating a peace treaty between Egypt and Israel.

“We felt like we could offer our mediation services to the world, and we began to do that,” Carter said. “I soon realized that was just one aspect of it … later we expanded our horizons a little bit to fill all the vacuums in the world.”

Last year, the center focused on advancing the peace process in Sudan, fighting malaria in Haiti and the Dominican Republic, and monitoring the presidential election in Zambia.

Carter said he has observed and monitored more than 100 elections around the world.

His center’s mission is “guided by a fundamental commitment to human rights and the alleviation of human suffering.”

The former Georgia governor, Navy veteran and peanut farmer won the 2002 Nobel Peace Prize for his “decades of untiring effort to find peaceful solutions to international conflicts, to advance democracy and human rights, and to promote economic and social development,” according to the Nobel Foundation’s website.

The 86-year-old O’Connor watched the ceremony from a wheelchair in the front row.

Carter thanked her, calling the former justice a “great hero” and one of his “favorite fly-fishing companions.”

“I didn’t always agree with everything that Ronald Reagan did,” Carter said, “but selecting her as a justice was one of the best decisions he ever made.”

In 2011 a powerful earthquake that hit Christchurch, New Zealand, the country’s second-largest city, resulted in massive damage, especially for a quake that registered a relatively modest 6.3 on the Richter scale.Many buildings collapsed, road surfaces cracked, bridges buckled, water and sand that burst up from the ground caused substantial flooding. Nearly 200 people died as a result.More than ...

In 2011 a powerful earthquake that hit Christchurch, New Zealand, the country’s second-largest city, resulted in massive damage, especially for a quake that registered a relatively modest 6.3 on the Richter scale.

Many buildings collapsed, road surfaces cracked, bridges buckled, water and sand that burst up from the ground caused substantial flooding. Nearly 200 people died as a result. 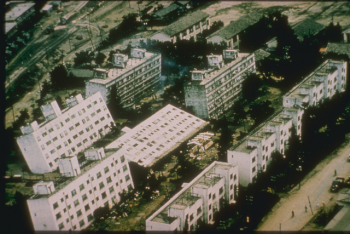 Soil liquefaction resulting from earthquakes can dramatically increase the severity of damage done by major seismic events. An Arizona State University geotechnical engineer worked with the National Academies of Science, Engineering, and Medicine to recently produce guidelines to cope with the threat of liquefaction. Photograph courtesy of the National Geophysical Data Center. Download Full Image

More than 100,000 modern, single-family homes were damaged and as many as 15,000 had to be abandoned and demolished.

The government later estimated that the cost to completely rebuild after the earthquake could rise to about $40 billion. Some economists estimate it will take more than 50 years for full economic recovery.

The prime culprit responsible for the severe impact of the earthquake was a process called liquefaction. It occurs when loose, water-saturated soil at or near the ground surface loses its strength when the ground experiences strong shaking.

Liquefaction and its destructive potential is a fairly widespread threat.

“There is literally trillions of dollars’ worth of infrastructure around the world on ground that is at risk of liquefaction,” said Edward Kavazanjian, a Regents’ Professor and the Ira A. Fulton Professor of Geotechnical Engineering at Arizona State University’s Ira A. Fulton Schools of Engineering.

The U.S. Geological Survey estimates that 40 percent of the United States is subject to ground motions severe enough to cause liquefaction sufficient to damage infrastructure.

The Christchurch quake was one of several big natural disasters that prompted the Earthquake Engineering Research Institute, an international technical and professional society, to call for an extensive study of methods to better determine soil liquefaction risks and deal with its consequences.

The EERI committee that recommended the study also recommended it be conducted by the National Academies for Science, Engineering, and Medicine, given the importance of its goal.

Once funds were raised, nominations were solicited for study committee members through a variety of channels, including the National Academies and the study’s sponsors. From those nominations, a group of 11 engineers and scientists whose combined expertise covered the spectrum of disciplines considered necessary for the study was selected.

Kavazanjian’s term as chair of the National Academy’s engineering committee ended by the time the funding was secured, but he then was asked to chair the ad hoc committee that conducted the study and wrote the report.

New guidelines getting debut before stakeholders

Now, five years after fund raising began and three years after initiation of the study, the “State of the Art and Practice in the Assessment of Earthquake-Induced Soil Liquefaction” has been released.

“We have conducted a comprehensive study that tells you the best practices that the experts know of to assess what is likely to happen if liquefaction occurs and to guide decisions on what to do in the way of prevention, mitigation and remediation,” Kavazanjian said.

Now he will be among the contingent of study committee representatives to lead presentations and workshops to introduce the report to major stakeholders around the country. 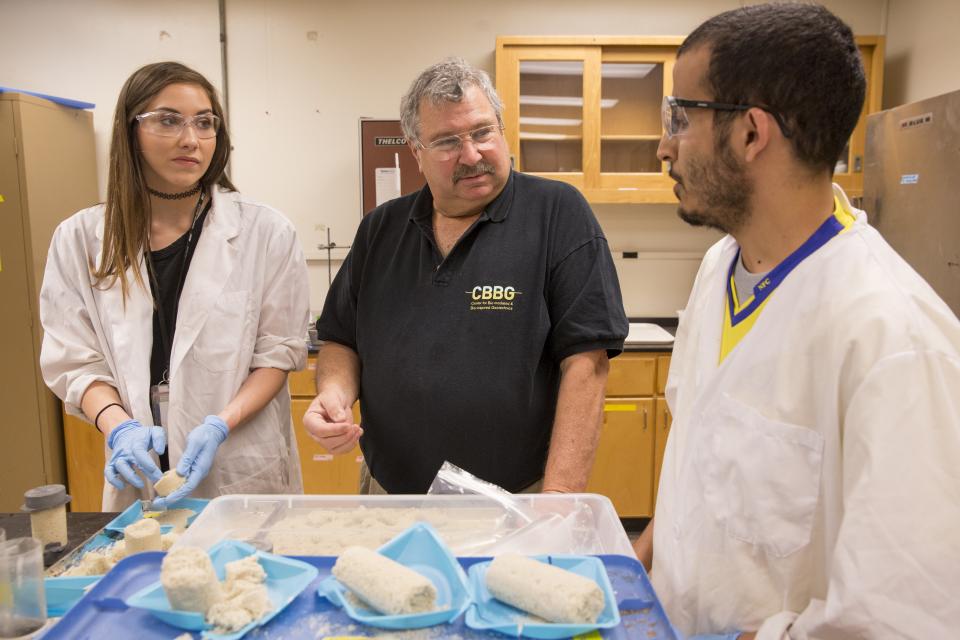 The Center for Bio-mediated and Bio-inspired Geotechnics at ASU, directed by professor Edward Kavazanjian (center), is developing new technologies and methods to help mitigate damage caused by soil liquefaction and similar problems. Photo by Jessica Hochreiter/ASU

The events include an open session at the February meeting of the Committee on Geological and Geotechnical Engineering in Irvine, California, and a breakout session in early March at the Earthquake Engineering Research Institute annual meeting in Portland, Oregon, and later in March at a featured session at the 2017 annual Geo-Congress of the Geo-Institute of the American Society of Civil Engineers at the international Geotechnical Frontiers conference in Orlando, Florida.

The importance of the study’s conclusions to industry and government agencies is reflected by the list of sponsors that funded the project. Those are the Nuclear Regulatory Commission, the U.S. Bureau of Reclamation, the Ports of Long Beach and Los Angeles, the American Society of Civil Engineers and the Federal Highway Administration.

“There was substantial contribution from groups that had never before helped to fund a national study like this,” Kavazanjian said. “That’s because this is something with a potentially big impact on major business and economic interests, as well as public safety.”

For example, coastal Southern California, which includes the two major ports in Los Angeles and Long Beach, as well as other critical infrastructure — not to mention the region’s broad swaths of high-priced real estate — is among places most at risk of liquefaction.

Kavazanjian said completing the report has been a challenge because the authors ultimately had to accommodate the viewpoints of differing schools of thought on the optimal methods to address assessment of the potential for liquefaction and the consequences of its occurrence.

He believes the study will nevertheless be well received by stakeholders despite the inevitable debates over some of its content.

“The 11-person study committee had to reach consensus on its recommendations, which were then subject to a high-level of peer review in accordance with National Academies policy,” he said.

Still, one conclusion of the report is that there is much more to learn about coping with liquefaction.

To answer all the questions on the subject, Kavazanjian said, “We need much more field data on how liquefaction interacts with structures. We need liquefaction observatories to study at-risk sites. We basically need to instrument some sites and then wait for an earthquake to happen at one of those locations. It could take 20 to 30 years to get all the data we need.”

While the report addresses the consequences of liquefaction, it stopped short of addressing how to mitigate those consequences. Some of the answers on how to do that will likely come from Kavazanjian’s work as director of the Center for Bio-mediated and Bio-inspired Geotechnics, a National Science Foundation Engineering Research Center led by ASU.

“Right now there are no cost-effective ways to remediate potentially liquefiable soil under and adjacent to existing buildings and infrastructure. That’s a big national and international problem,” he said. “It’s one of the big things we want to make possible with the technologies we are developing at CBBG.”